So finally we will be visiting Sikkim. It seems in Manish’s office this is a “To Visit” place. When I started to read about Sikkim, there were many surprises in store. How less I knew about my own country? Sikkim was a separate country till 1975 and then in the 1975 referendum, 97% of the electorate voted for it to be transformed from a Protectorate to an associate state of India. Sikkim is not dogged with the social and economic problems like casteism, child labor, begging and discrimination against women. The crime rate is negligible and the state is not troubled with insurgency.

We booked our tickets well two months in advance, but we started planning and hotel booking only one two weeks before. I always swear that I will never do it like that, but then always get attracted to “The Charms of Laziness”, making trivial things like booking a hotel, an adventure, a suspense.

After surfing, reading & getting some good suggestions, we settled for West Sikkim- Pelling, Yuksom and Biksthang. Our driver for the journey from Bagdogra to Pelling was Mr. Aaroop Dutt. I would have taken him as a co-passenger; a nice looking gentleman, very jovial, stylish and intelligent too. You could feel the communist influence on him. I think this is present in many of the Bengalis whether or not they are supporters of communism. A mineral water bottle: Please don’t buy it from the petrol pump, that guy is anyway rich enough. Please buy it from a nearby shop and help them to earn a little, was his suggestion.

A few vocabularies we picked from him: “Sukh-tak” Happy days, “Dukh-tak” bad days and the real gem “Tuk-tak” for our “theek-thak”. So imagine someone asking you, how are you and you impressing him with your “Tuk-tak.”

First came the trading town of Siliguri. And then there came the place where narrow gauge track was passing in vicinity of broad gauge track. Rachit ( he is now 5+) was observing everything keenly. Pat came his question- “What is this? The train track is so narrow!” We explained him that it is a narrow gauge train track that goes to Darjeeling on which runs a Toy Train. “A Toy Train! Why are we not going there?” As ever, he was a good boy. We explained and he tried to understand— This time Successfully. 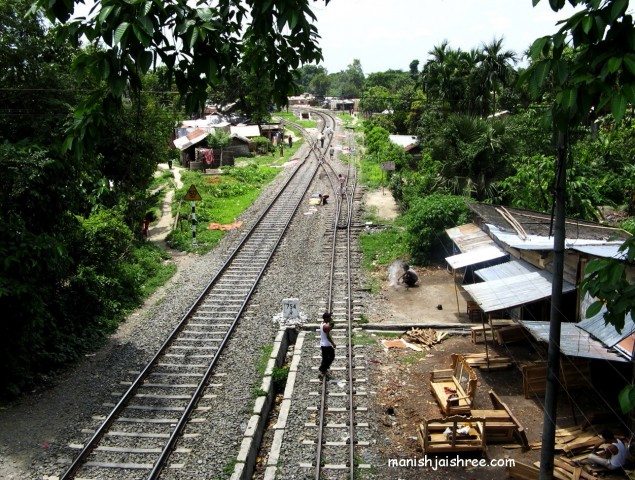 Extreme humidity in and around Siliguri gave way to soothing air and dense greens and soon we were going along Teesta River and were going crazy. You can expect such things from Rajasthanis. 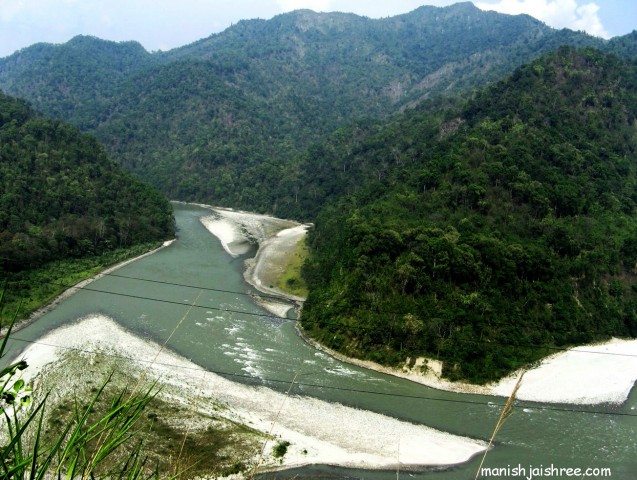 Aaroop told us that we would be driving along Rangit River in Sikkim, which is so beautiful that it ROMANCES with you. What? I thought him to be a boast-to-the-tourist kind of person. A river will be beautiful, very beautiful but he was definitely exaggerating it. 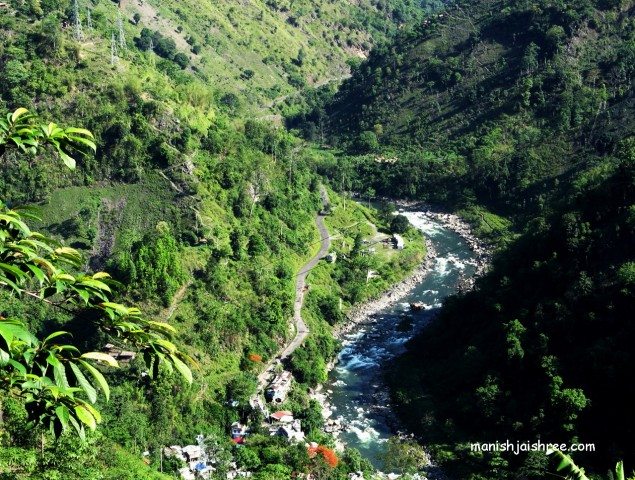 Rachit started counting bridges that we were crossing but after 20+ he stopped counting as he too became busy admiring all those streams and rivulets, rushing down to join Rangit. The rivers of Sikkim are perennial. Thousands of megawatts of electricity can be generated there, but only a part of this energy has been tapped.

No one was there to break the silence except Crickets or rather they were making this silence more profound. Occasionally there were a few men and women alongside the road. It seemed they were relaxing and I was wondering when was it last that we sat like that-not chatting, not reading, and not even thinking. Nobody was moving what to say of hurry! Kids were playing football,not cricket. After all, it was Bhaichung Bhutia’s land. 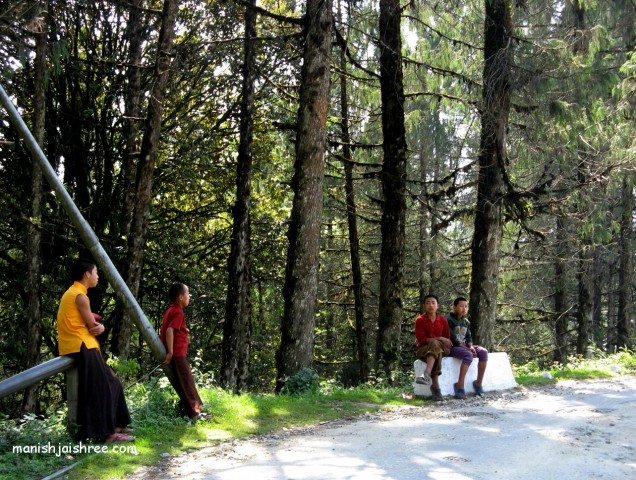 Relax! You are in Sikkim!

Football is the sport here.

None of us was talking. We were so mesmerized by the beauty and sound. Aaroop started to play R.D.Burman and suddenly those melodies enhanced the pleasure of our journey. It had been 4 hrs and we have crossed Jorethang, Legship and Gezing and around 5 pm we were in Pelling.

Our destination was hotel Dubdi and Aaroop stopped to ask “Saathi hotel Dubdi kaan choo”. This was our first introduction to the sweet Nepali, the lingua franca of Sikkim. As we moved towards Dubdi in Upper Pelling ahead of Helipad, we tried to figure out on which side Kanchendzonga might be.

We checked-in the hotel, and after completing the formalities asked the land-lady from where could we view the whole range of Kanchendzonga as shown at their reception. She took us to the balcony on our floor and then to the terrace on top and informed us “They are on this side and you can view them only if you get-up at 4:45 am. You can see them from your window as well.” We wondered where exactly it could be as there was an open expanse and no signs of mountains.

We hurriedly ordered for dinner. It was not more than 6pm and it was already dark. We realized the east-effect. Early to bed and early to rise was the mantra we followed during our stay in Sikkim.

Rachit was sleeping. He was tired, but very happy. His enthusiasm for traveling keeps us on our toes “Literally”. Manish, as ever went down to reception desk for the “ground level” information which will help us to decide our next day’s plan. Poor soul! He is restless till the time he has ensured that what will be the next day’s plan. I think it’s his “sleeping pill”.

I went to bed dreaming of the Mountains. I had to wake-up early. I did not want to miss Kanchendjonga. Will I be able to sleep with such an excitement and the target of 4:45 etched in my mind?

Summer in Sikkim-way to Pelling was last modified: June 15th, 2017 by Jaishree Khamesra