I was pleasantly surprised to see that Ronit (13) and Roshit (9) had got up early on their own, taken a bath without my pestering them to do so and had started to load the rucksack and the other bags at 4:15 in the morning while excitedly taking photographic evidence of their hard work. Their energy levels seemed out of the world as they had stayed awake till 1am, preparing different types of veg and non-veg sandwiches. 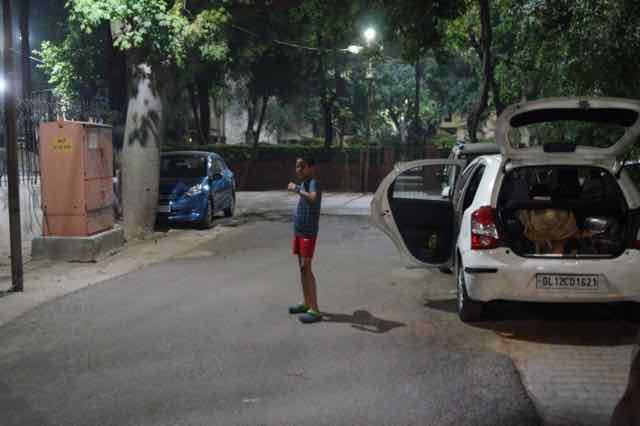 Getting loaded at 415 am

Finally we started off at 4:30am and updated the guard at our colony gate of our unplanned vacation. The only thing crossing my mind repeatedly was the packing list of all the minimum requirements as we were travelling to an area that was pretty unpredictable in terms of weather, landslides and unforeseen traffic jams that could last couple of days. Memories of a similar unplanned trip last year to Deoria Tal, Tungnath and Badrinath was still afresh wherein we had reached Badrinath at 11:30 at night after a very long and dangerous drive and were on the verge of having to sleep in the car as all the hotels were packed to the brim.

The drive till Rishikesh via Haridwar was fast and uneventful and we were at the Biometric Registration Camp at Rishikesh Bus Terminus by 8 in the morning. Ajay bhaiya had also arrived at the bus stand on his bike from Dehradun. Ajay bhaiya is our close friend and trekking partner and provides mediation and
stability during my ‘difference of opinion’ with my husband. We parked the car outside the bus stand and rushed in to locate the shortest line. This registration is mandatory for all Chardham yatris. We already had copies of our Adhar cards which were scanned quickly to generate our Chardham passes. Finally we were on our way to Kedarnath. 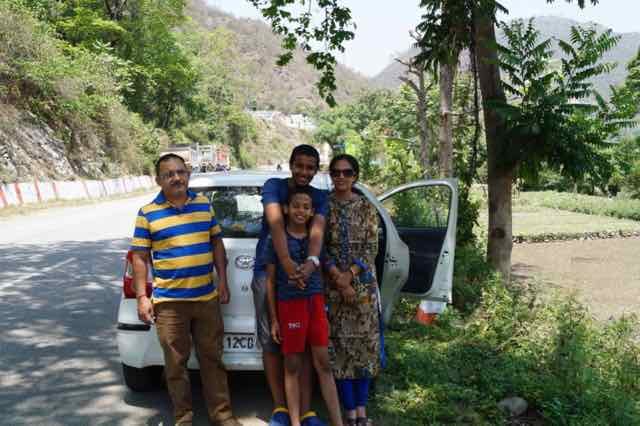 On our way with Ajay bhaiya

The freshly laid roads were a pleasure to drive on till rains and landslides would take their toll. We stopped at Hotel Rajhans at Srinagar for a sumptuous lunch, where according to us, the tastiest food is served on this stretch. Remnants of the 2013 disaster is visible at several places including this primary school whose ground floor was inundated in the mud flow (and still remains the same way till date). 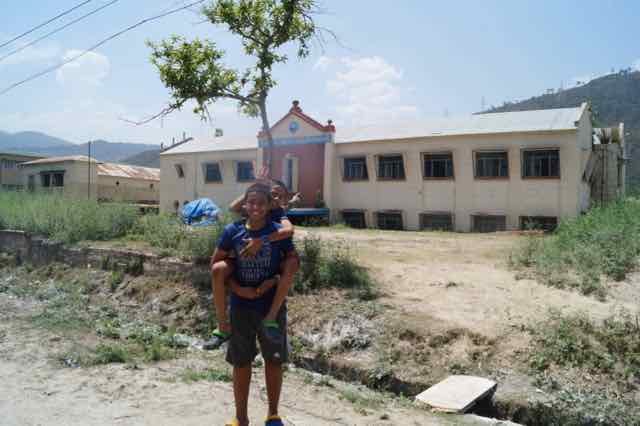 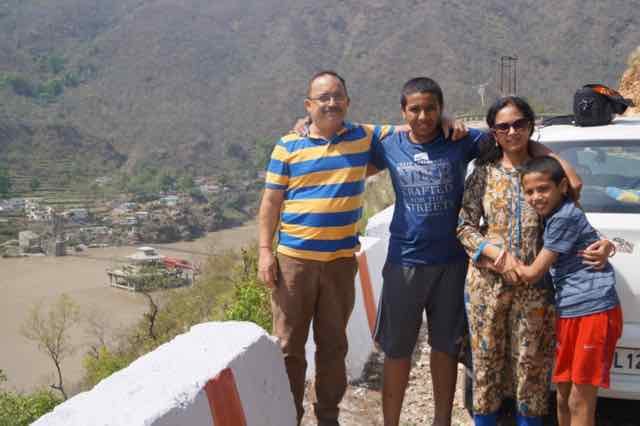 Dharidevi temple in the background

My husband had trekked to Kedarnath 20 years back with his friends and had prewarned us about the treacherous trek. We had an open target to reach Gaurikund the same evening, if possible, from where we would start the trek the next morning. Couple of small wayside towns with easy to remember names like Rampur and Sitapur had sprung up before Sonprayag and already seemed to be full and bustling with tourists.

My husband told me that he did not remember seeing these towns earlier and seemed to be new additions to cater to the growing volume of pilgrims. We were stopped at Sonprayag which was 5km before Gaurikund and were informed by the local police that private vehicles were only allowed till this point. Earlier buses from Rishikesh used to ply till Gaurikund. The huge parking had been carved out from the floodplains of the Mandakini at Sonprayag. The hotels were very basic and exorbitant. You will find several young boys marketing their hotels as you walk into the town. Electricity visits the town only in the evenings and that too keeps on fluctuating. We later thought that staying overnight at Rampur or Sitapur would have been a better option. Or one could travel further to Gaurikund to stay at one of the hotels there.

We had dinner at a ‘Bhandara’ right next to the parking where the food though basic was very tastfully prepared. We took feedback from the other yartis returning from Kedarnath about the facilities at Kedarnath. We retired early that night as we planned to start trekking the next morning. We divided the basic clothes and jackets that we planned to carry and left the majority of the luggage in the car. 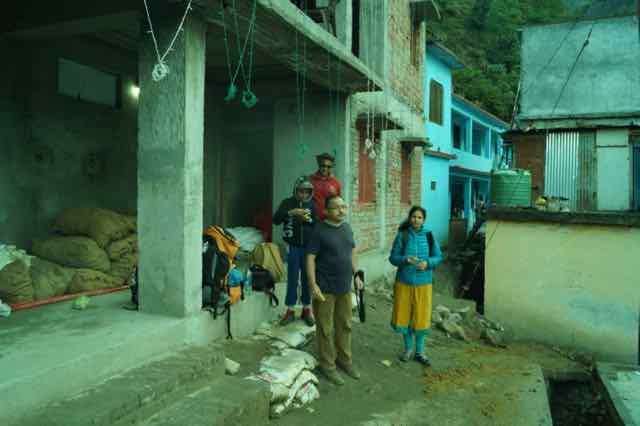 We had been told by the chaiwala near the parking, that pilgrims start trekking from 3 in the morning but we were too tired and lazy and tried to start that early. However I made everyone wakeup by 4:30am and get ready. Hot samosas were available at 5am which seemed a very tasty option that time. A short walk took us to a bridge, on the otherside of which shared Boleros at Rs.20/- per person would ferry us till Gaurikund. As usual people from the North were eager to break the queue and Ajaybhaiya took upon himself to ensure that discipline was maintained.

We started our trek from Gaurikund at exactly 7 in the morning. The 1st main obstacle was the pony registration point just outside Gaurikund. The stench of over 2000 mules was overwhelming and made us rush through that place. Most of the pilgrims were opting for mules or pitthus. Some elderly were seeking the comfort of palkis carried by 4 people on their shoulders.

The incline is quite steep right from the beginning but the sight of the Kedarnath Hills from a distance kept us going. We had Maggi on the way for breakfast but later felt that such foods are best avoided if trekking has been opted for. The refreshing water from the natural water falls throughout the way are tasty and help in regaining lost energy. We soon separated as per individual speeds. 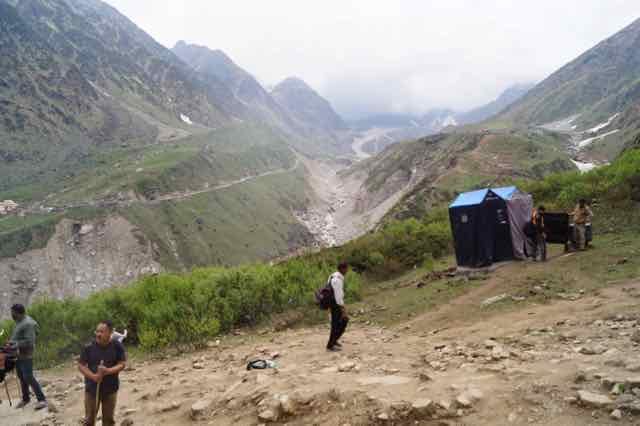 Scale of devastation – old washed out route is also visible

The incline suddenly increased drastically at Rambara after we crossed the bridge over the Mandakini. Every step seemed to take extra effort and walking with a 4kg backpack seemed to be an enormous struggle. The sheer frequency of the helicopters flying overhead from Phata seemed to tease us more. It began to rain suddenly. Thankfully we had been pestered and persuaded by a small boy at Rishikesh Bus Terminus to purchase five plastic raincoats (@Rs.20/- each) that saved the day for us.

The narrow and slushy path crowded with the mules and their generally rude handlers made walking even more difficult. To top it up it started to rain again as we neared Kedarnath. 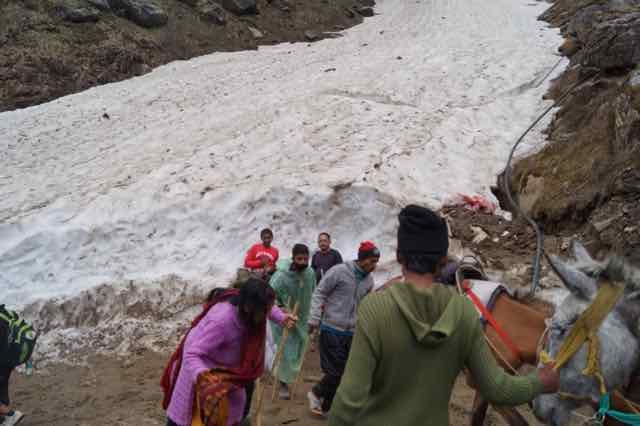 We rushed inside an animal shelter that was already overflowing with mules, their riders, handlers and other yatris. I had teamed up with Roshit and had no idea where the other people were. Again it was the plastic raincoats to our rescue. The rain however did not stop completely. The heavy showers turned into a drizzle that continued throughout the night. 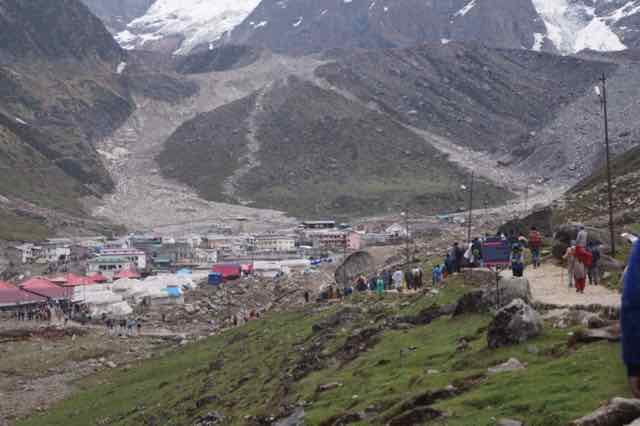 The continuous rains had made the final climb even tougher. While I waited with the kids, my husband and Ajay bhaiya went in search of a tented accommodation put up by GMVN. I was told that there was a long queue even for this basic accommodation, however Ajaybhaiya managed to get 5 beds for us in tent no C80. The accommodation was very basic and each bed meant a foam mattress and a sleeping bag. Without thinking twice we all took our ‘beds’ immediately.
More to follow…

Delhi to Kedarnath, a long and arduous journey was last modified: July 13th, 2022 by Soma Chakraborty