We started our bus journey from Trimbakeshwar towards Shirdi. As it was a direct bus, it did not enter Nasik city and bypassed it. We were on the same Nasik-Pune road from which we had come in the morning but this time in opposite direction. At Sinner, the road bisects. Left side road goes towards Shirdi, straight road goes to Pune. As we were approaching Shirdi, the condition of the road was improving. Last few kilometers have four lanes. The bus took around three hours to complete the journey of 114 KM. We reached Shirdi around 5PM.

The moment we got down at Shirdi, some humble human approached us and promised to show a cheap, neat and clean hotel. They also offered us to have quick darshan from back gate as it is very crowded due to vacation and it may take hours for darshan. They came one after another. We simply refused them. These people are actually touts. You’ll find them almost at any place of repute, especially at religious destination. All you have to do is to purchase prasad from their shops. But it is always better to ask and fix rates beforehand. 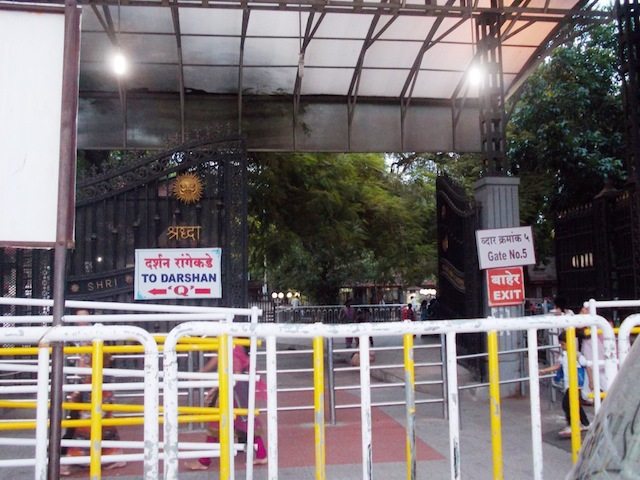 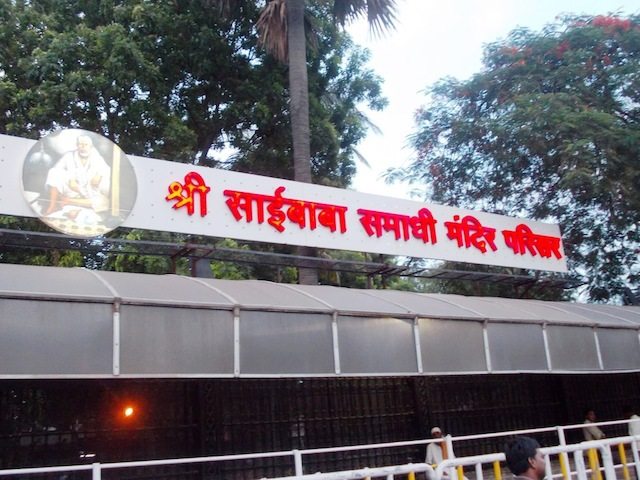 Now without wasting any time we wanted to get the darshan but before it we had to deposit our bags and luggage. For all of us, it was first visit to Shirdi and we were not familiar with the area. So we entered in the enquiry office in Sainath Mangal office. There were many cloak rooms available for luggage and one separate cloak room for mobiles and cameras. Two canteens were also there serving eatable items at subsidized rates. A mineral water bottle was available for Rs. 7, tea for Rs.3. This building is huge and earlier it was named Saiparsad Bhakat Niwas. Now it has been turned into Sainath Mangal office and also has few guest houses. 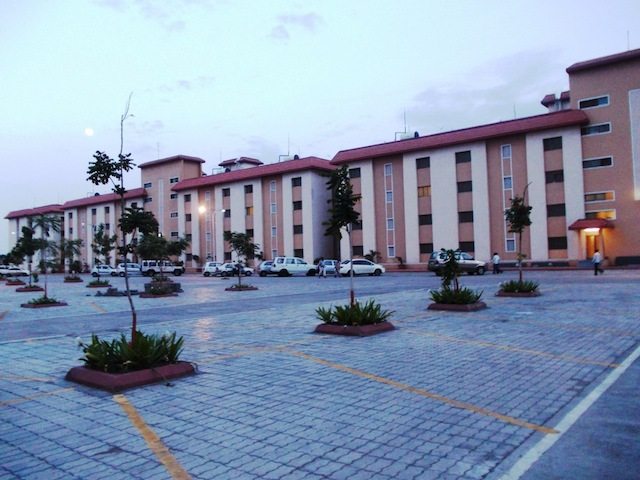 After depositing our belongings we hurriedly went for darshan as the time of evening Aarti was near. During Aarti, darshan is closed for general public and only few people are allowed who have pre-booked for Aarti. 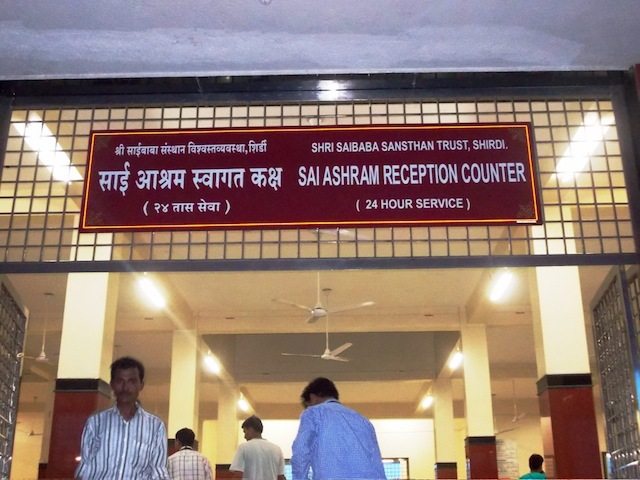 One can book Aarti online for Rs. 500 and can take part in any Aarti he/she wants. Shri Sai Baba Sansthan Trust has made it extremely convenient for Sai devotees to book Sai Baba Darshan and Aarti online. At times devotees do not know about various facilities offered by Sai Baba Trust and fall prey to touts and anti-social elements. It is very convenient to book Sai Baba Darshan and Aarti online. It saves a lot time and hassle of figuring out what and how to go about darshan and Sai Aarti.

There are four Aarti that take place at Sai Baba Temple during different times of the day.

Depending on your convenience and availability of tickets, you can choose any of the four Sai Aarti. Kakad Aarti is the most preferred and popular of all. Once you have booked Sai Aarti online or any other service, you can easily modify or cancel if there is any last minute change in your program.

To book Sai Baba Darshan and Aarti online, all you need is to sign up or register on http://online.sai.org.in/. 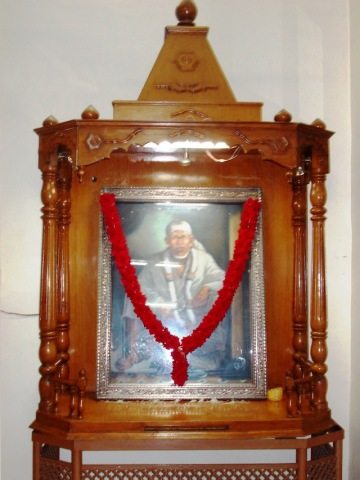 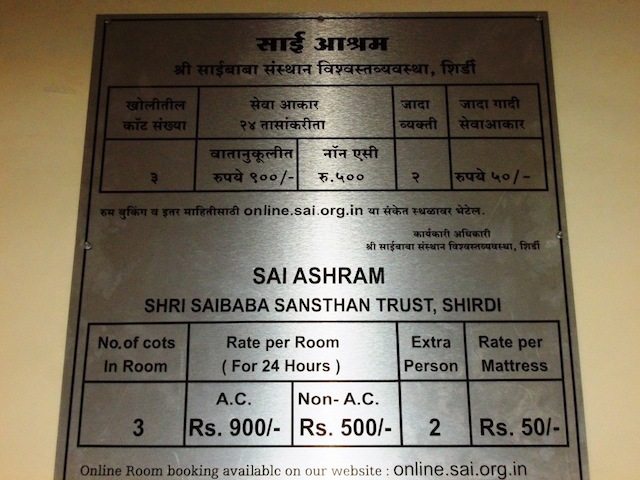 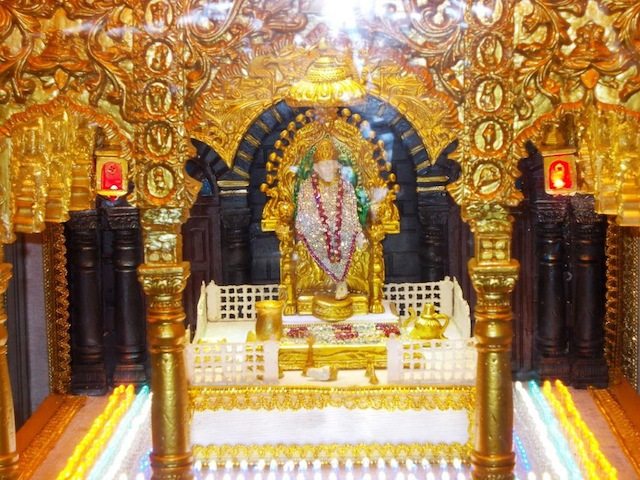 The temple premises is large and for darshan one has to cross few barricades and when we reached in a big hall near the main Samadhi temple, doors were closed in front of us. We were told that cleaning work has started for Aarti preparation so we have to wait for one hour and doors will reopen only after Aarti. We were already very tired due to long bus journey and two hours stand to wait for darshan in morning at Trimbakeshwar Jyotirling. Now again waiting was like adding insult to injury. As no other option was available, we sat on the floor.

(The dynamics of darshan at Shirdi also dependent on number of devotees at that particular time. Generally During lean season (July – October) it is not very difficult to have smooth darshan.)

After five minutes, suddenly door was open and we were asked to go for darshan- as there was some delay in Aarti. We entered from one side and have darshan and came out from another door, just opposite to entrance. After darshan we also went to Dwarkamai, Chavadi and Gurusthan. These all places are on the backside of Samadhi temple. There is also one canteen serving snacks, tea and coffee. After spending one good hour there we came out and start searching for accommodation. We came to know that there is one new huge accommodation complex built by Sai Sansthan is opened for public and we can get room there. We hired an auto and reached there. The complex is huge, neat and clean with plenty of parking space. It is named as Sai Ashram Phase-1. We went to reception and book one non AC room with three beds. We stay there for one night and next morning we left for Shani Signapur. 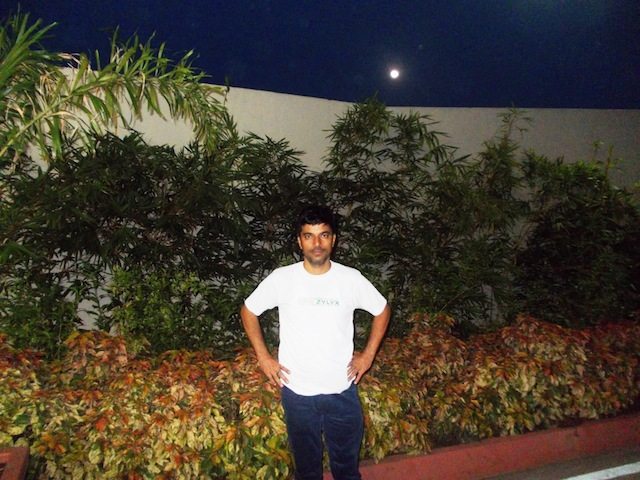 Shirdi:
Shirdi is among the most popular religious places in India. It is a small town situated in Kopergaon, district Ahmednagar, Maharashtra.  Located around 250 km from Mumbai, the humble abode of Sai Baba attracts lakhs of pilgrims every year.

It was a small village but when baba came to this place it was converted in a small town. Sai Baba, as believed came to Shridi at the age of 16 and remained there for life. Initially he wanted to stay at Khandoba’s Temple but temple’s priest did not allow him to stay there and eventually he stayed at a mosque, and gave it name as Dwarkamayi. He spent most his time under a Neem Tree, which can be found in the temple complex. Sai Baba breathed his last on 15 October 1918 and was buried there. Today, Shirdi has a well laid out temple complex and a beautiful shrine dedicated to Sai Baba. 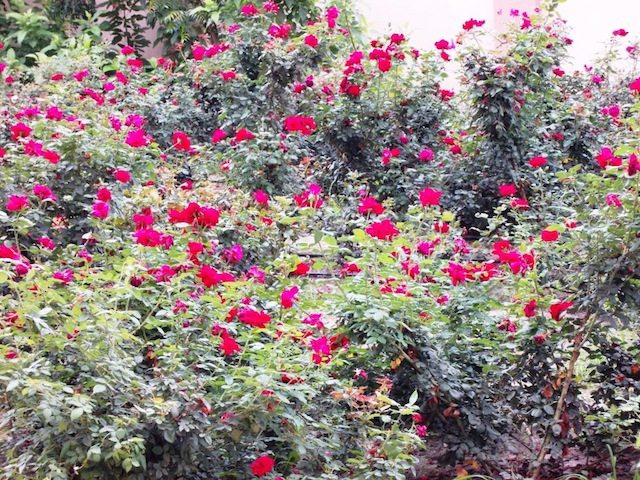 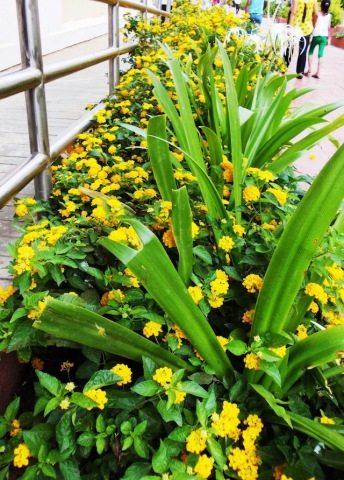 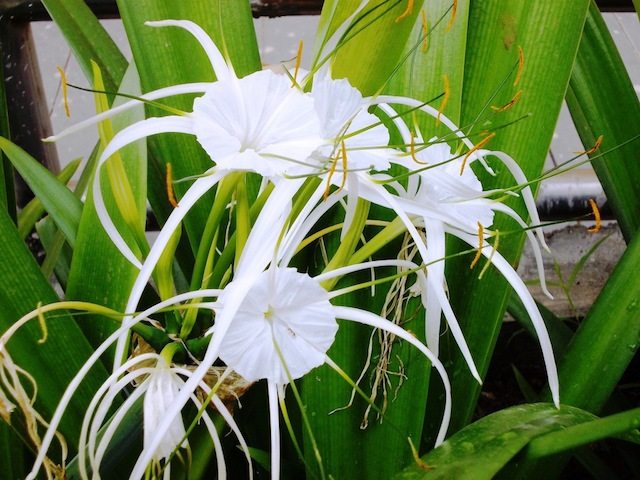 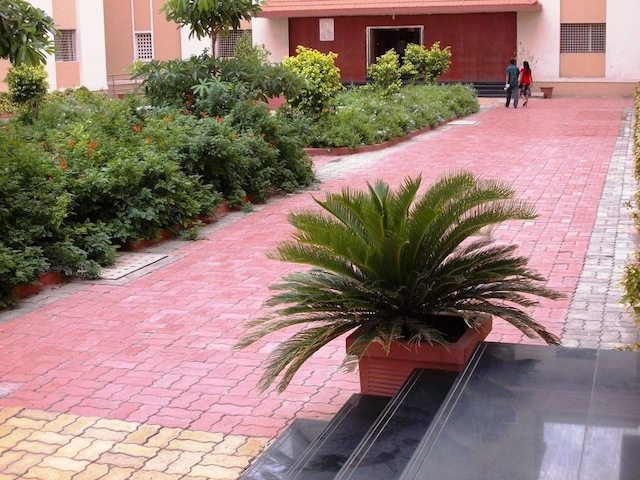 How to reach Shirdi?
Shirdi can easily be reached by rail, road and air.  Mumbai is the major nearest airport to Shirdi, which is 250 km away. Pune, 200 km and Aurangabad, 140 km are other airports near Shirdi.The temple town of Shirdi has recently been linked by train to other parts of India. Sainagar (SNSI) is the closest railway station, which is just 10 km away from Sai Temple. As there are only few trains for Sainagar, your second best bet is Kopargaon (KPG), 14 km away. Manmad (MMR), 55 km away and Nasik Road (NK), 85 km away are other railway stations that you can get down at and reach Shirdi.

(The following information is taken from the small guide book, which I purchased from Shirdi.)

Accommodation in Dwarawati, Shirdi
Built in 2008, Dwarawati is close to the Bus stand. It is approximately 300 meter away from Sai Baba Temple. Dwarawati has 320 rooms, dormitories and large rooms to accommodate small groups or families of six to ten people. There are 80 air-conditioned rooms as well. Dwarawati is also well equipped with the facilities like 24 hr. water supply, electricity supply (with power back-up), parking and security. You can get a basic room for as little as Rs. 125. Air-conditioned room can be booked for Rs. 800 – 1000.

Accommodation in Sai Bhakta Niwas, Shirdi
The New Bhakta Niwas has 542 rooms of various categories. This complex is located on the highway and the trust runs round the clock shuttle service between temple complex and New Bhakta Niwas to ferry the devotees.  It is about half a kilometer from Sai Baba Temple towards Ahmednagar. This complex is well equipped with canteen facility, parking space, 24-hr water supply, electricity supply (with power back-up) and security.

Accommodation in Sai Ashram, Shirdi
It (Sai Ashram Phase 1) is the newest of all and has 1536 rooms, which can accommodate up to 9000 devotees. Of 1536 rooms 1152 are common rooms with attached bath room and 384 air-conditioned rooms.  Besides, the ashram has a common services block where you have restaurant for Sai devotees. The Sai Ashram also has an Open Air Theatre (OAT), which can accommodate up to 2000 devotees for Sai Kirtans, Bhajans and other cultural programs.

Accommodation in any of the above ashrams can be booked online. Rooms online booking purely depend on availability of rooms. Sai Baba Trust online room booking is very easy. All you need to do is register/sign up on http://online.sai.org.in/. 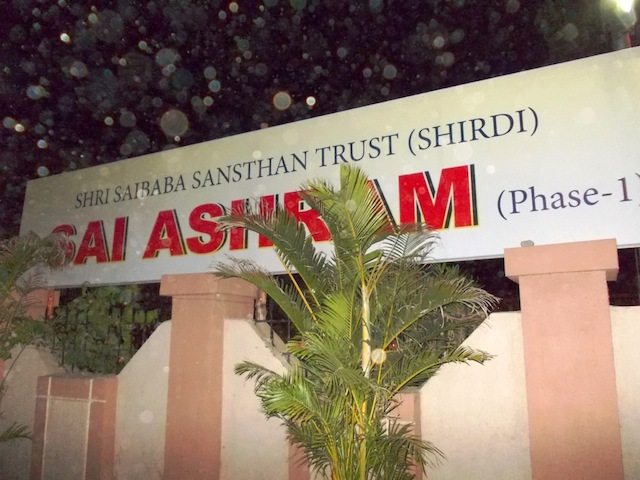 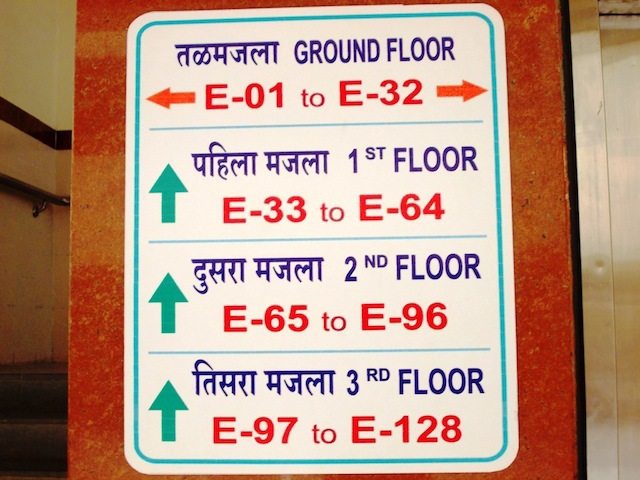 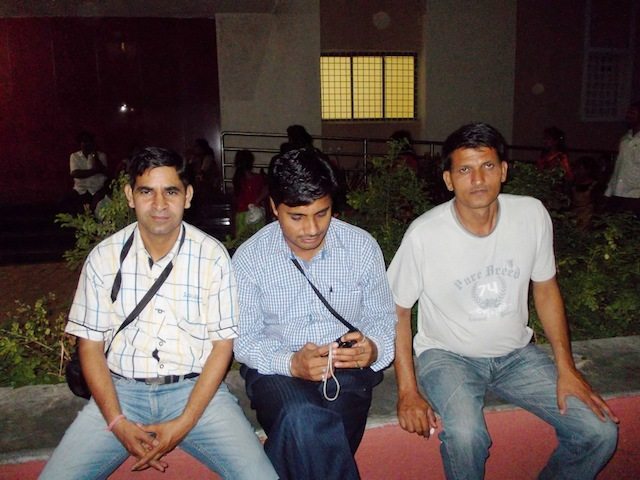 What is the best time to visit Shirdi?
Keeping in mind the weather of the region, October to March is the best time to visit Shirdi. The temple gets really crowded during summer vacations in May-June and during festivals especially on Ramnavmi, Gurupurnima and Vijayadashmi. Besides, a large number of devotees also visit on Thursdays, which is considered Sai Baba’s day.  A procession of Sai Baba is taken on every Thursday at 9:15 p.m. If you prefer to visit during lean season, August and September are good months. Monday and Friday are lean days when temple is not too crowded.

Next Post on Shani Signapur…. The abode of Lord of Justice.

Part I covered our journey from New Delhi to Uttarkashi, during May 10. Our first night halt was at Rishikesh (220 kms from New…