On the way to ZojiLa

It was the day before our journey to ZojiLa. We were at Sonamarg in Kashmir when I called Rahman, a Ladahki Muslim Driver, completely unknown to me whose contact I got from online sources. I booked him for our Ladahk tour over phone without paying any advance.

“Advance ka kya hai Sahab, zaban hi kafi hai” – it was his reply to assure my cab booking. I believed and believed all along because rarely I found tribal people fail to keep their word. So I called Rahman from Sonamarg a day before our journey, to tell him about our time of departure in the next morning.

I doubted if he could reach on time! So early in the morning!! But to my surprise he called me at 5.45 in the morning to ask for the location of our hotel. A few minutes later, another call from him, “Sahab main pahunch gaya!”

Rahman arrived with his brand new INOVA which he purchased only seven days back and we would be the first tourist in his cab. At once smiles ran across our faces. Cheerfully we boarded in and hit the road to Ladakh sharp at 6 in the morning.

24 Kms from there and we would be on the world’s most treacherous mountain pass ZojiLa which is located on the Srinagar-Leh National Highway 1D in the western section of the Himalayas mountain range. It took only a few minutes to reach there. I asked Rahman to stop for a while and park the cab along the road before confronting with the deadly part of ZojiLa. I got down and looked at the sharp mountain edges to find a road there. A thin line was only visible. I doubted that to be the road to Ladakh. But soon my doubts were vanished as I saw vehicles coming from the opposite side. It was the road which looked like a thin line. “Oh my God, how dangerous it is!” I sheered. 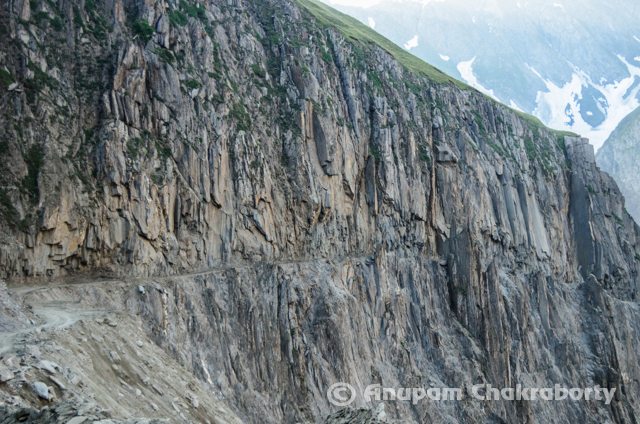 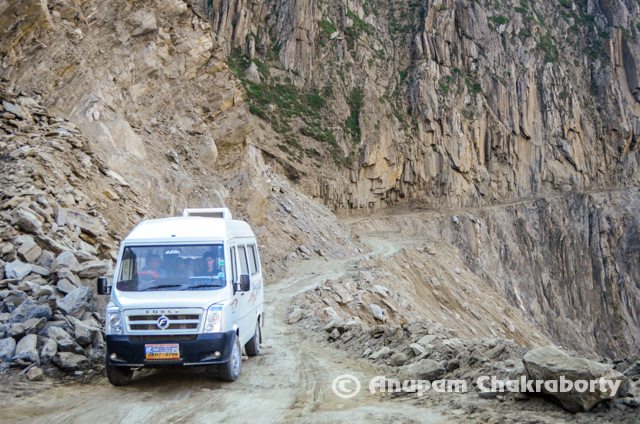 A Cab on the Pass 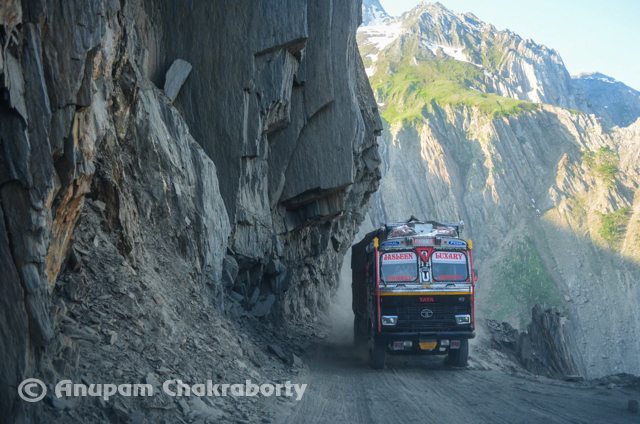 A Truck on the narrow road of ZojiLa

Wait a minute! It has a history of war too. Don’t raise your brows! Yes, it has. Kashmir was then an independent Kingdom and Maharaja Hari Singh was its king. It was the year 1947-48. The king was finding it difficult to decide with which country to join his territory, India or Pakistan, or to remain independent. The king chose to remain independent but his wishes were short lived and dashed in October 1947 as Pakistan sent Muslim tribesmen invader into the territory of Kashmir who were then approaching to the capital Srinagar fast. Maharaja Hari Singh signed the Instrument of Accession, ceding Kashmir to India on 26th October. Thus the first war between India and Pakistan broke out over Kashmir in 1947. India referred the dispute to United Nation on 1st January 1948. During this war Pakistani invaders seized ZojiLa in 1948 while they were on the verge of capturing Ladakh. On 1st November, Zojila pass was recaptured by Indian forces under Operation Bison. On 1st January 1949, a ceasefire was agreed with only two-third of the whole Kashmir under Indian control and the remaining with Pakistan (we call it now as Pakistan Occupied Kashmir or P.O.K). In the ceasefire lines, LOC (Line of Control) was drawn up which was formally established in 1972, after a third war between India and Pakistan in 1971.The Line of Control remains the de facto border between the two countries.

We spent enough time at the pass looking at how other vehicles were negotiating the road at the mountain edge that has no barrier. The road is so narrow and vicious that it is known as one of the most dangerous passes in the world. But the route is a lifeline that keeps the people of Ladakh connect with the rest of the world. However it remains closed for more than six months in a year for blockage due to heavy snowfall. The road reopens in late spring. ZojiLa at an elevation of 11649 feet above sea level is considered to be the second highest pass after Fotu La on the Srinagar-Leh National Highway.

The adventure of negotiating treacherous road through this pass was undertaken cautiously by our cabbie Rahman. Yes, the pass is adventurous! And everyone needs to drive safe on it! We saw ahead a high rock standing on our right forming a shape together with the mountain on the left like a gate and our cabbie called it as the India Gate on this route. 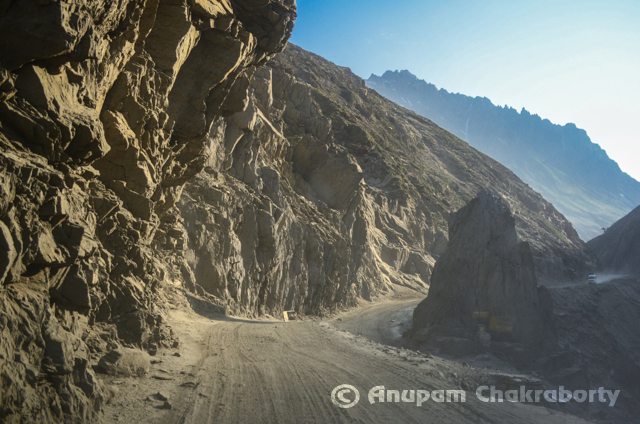 We left the so called India gate on Srinagar-Leh road behind and soon noticed the sign board of Project Vijayak of BRO that welcomes the traveller to Ladakh. It indicated the elevation of ZojiLa as 11649 feet above sea level. 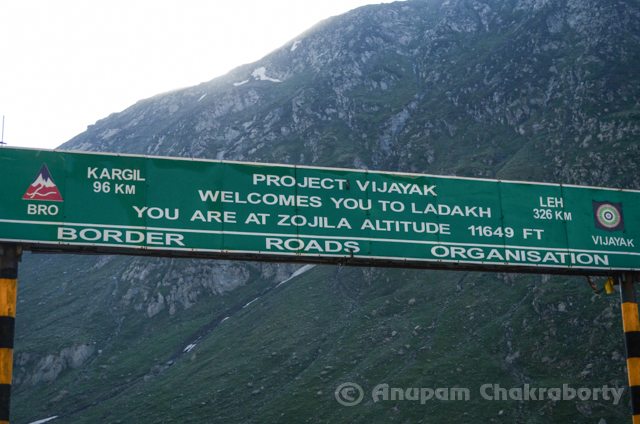 We moved ahead. Now the road appeared to be plain and safe. On the way we had to stop for allowing sheep to cross over. Surely a valley was ahead. Rahman confirmed it to be the Drass. We were now approaching towards the Drass valley, the second coldest inhabitat place in the world. 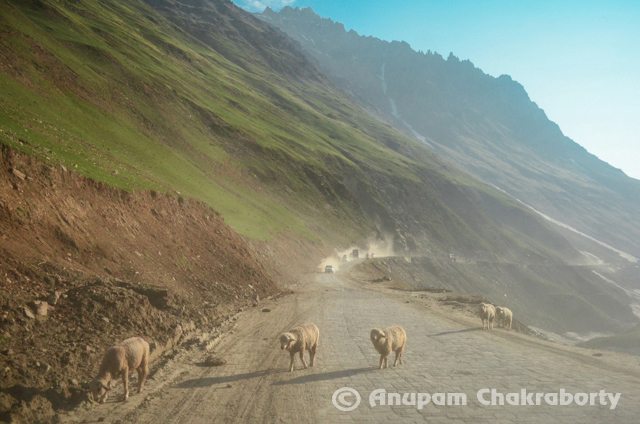 Soon the valley appeared. Amid the chocolate brown coloured high barren mountains, Drass is a green valley by the side of River Drass which looked so beautiful. The valley started from the base of the mountain pass ZojiLa.

We moved ahead keeping the River Drass on our right. After a while we stopped at a place where almost 12 feet high and approximately 300 meter in length a wall was constructed to cover the highway against the shelling of Pakistani aggressors from behind the nearest mountain peak. 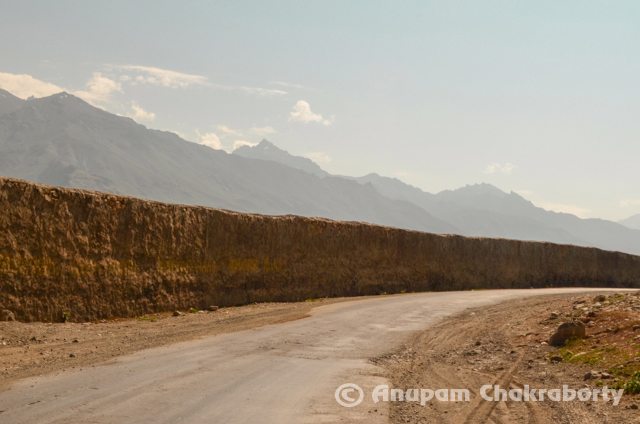 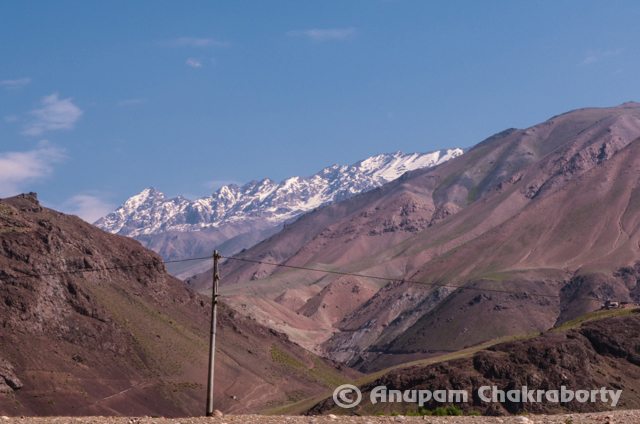 Snowy Mountain from behind of which artillery fires are made

Tololing Range on the left

As we progressed we saw a sign board along the road indicating Tololing Range on our left. Tololing Range is the imposing mountain of 16000 feet which overlooks the village of Drass. It is said that recapture of Tololing range by the Indian soldiers was the turning point of Kargil War in India’s favour. It is where most of our soldiers laid their lives fighting the enemy.

Our arrival to the Kargil War Memorial at Drass was few hundred meters there from and we proceeded towards that….. 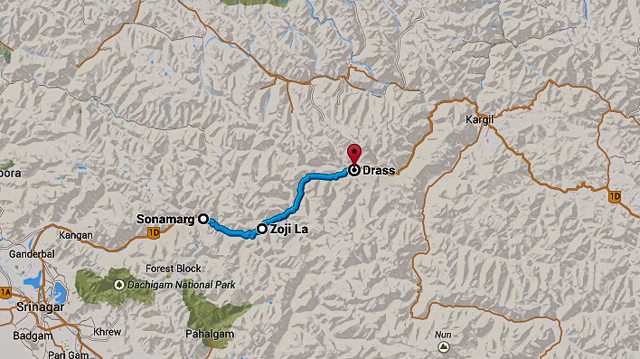 Map indicates the route I travelled and places covered

I will come back with the story of my visit at Kargil War Memorial in the post to follow soon, till then-

Majestic Ladakh : ZojiLa- The Most Treacherous Mountain Pass In The World! was last modified: December 27th, 2021 by Anupam Chakraborty

My last road trip to Haridwar was in Feb this year. After this trip again in March this year I did a road trip…