This is the second post about my 12 day vacation trip. In the previous post I had described the trip to Aurangabad and Ellora. From Ellora we left for Manmad where we had the night train to Pune. Trains usually depart late from Manmad. God knows why! Next morning we arrived in Pune and after a lot of hotel search (Hotels are usually full during June – July in Pune due to admission time.) checked into one with available rooms and reasonable price (considering Pune prices). It had wonderful surroundings..peaceful and green. And the hotel rooms were good too. 3rd day was spent resting.

4th Day :- We hired a vehicle to take us to Khandala and Lonavala and back. The driver turned out to be a mobile phone addict!! Thank god we had a safe trip. We stopped at a little restaurant “Shiv Sagar” just outside Aundh. The food was tasty and reasonably priced. After filling our stomachs we moved on. The Pune – Mumbai Expressway was beautiful and the long tunnel awesome!

As it hadn’t started raining yet, all the waterfalls and greenery were dry in Khandala and Lonavala. So we didn’t get to enjoy much in the hot sun. We found Lonavala to be better than Khandala though. We bought several packets of the famous Lonavala Chikki and came back to Pune by evening.

5th Day :- Again we hired a vehicle from the same guy to take us around Pune. And ended up with the same driver. First of all we went to Aga Khan Palace in Pune. It was a wonderful place with such green surroundings and peaceful atmosphere.

The Aga Khan Palace Pune is a national monument of India’s freedom movement. Following the launch of Quit India movement in 1942, Gandhiji, his wife Kasturba, his secretary Mahadevbhai Desai were interned at the palace from August 9, 1942 to May 6, 1944. Mahadevbhai and Kasturba passed away while in captivity at the Agakhan palace and their samadhis are located in the campus.Situated near the River Mula, the palace is a simple memorial to Gandhi and his life. The famous movie ‘Gandhi’ was shot here.

Then we went onto see Pataleshwar Caves and the adjoining Shri Jangli Maharaj Mandir. I was surprised to find so many office goers ( from their attire and bags) lounging around with newspaper or some book in that mandir and caves area on a late weekday morning. 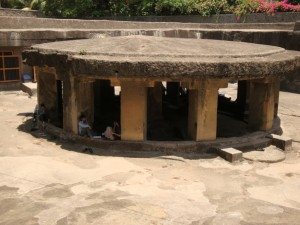 From there we went to visit Shaniwarvada, a palace fort built by the Peshwas.

Then we went to see the Raja Dinkar Kelkar Museum. It was awesome but camera was charged at Rs 150 extra!! It was too much! But yes it is indeed a place to take snaps. Such wonderful artifacts. Maybe I will take photos when I go to Pune next time. From there we went to Nivant Garden Restaurant on Paud Road. There were three sections at that place – one ac section full of agarbatti smoke, one hot garden considering there was no wind and one inside with very less fans. We were all sweaty by the time we finished eating. I won’t recommend the place in summer. The chilly chicken dish in Pune restaurants (I saw in 2 of them) is quite different from other places. It is served as long slices!

After lunch we skipped a few places and went to Khadakwasla Dam which didn’t turn out to be much enjoyable at afternoon.

Then we came to back to hotel. On way the driver stopped the vehicle and went to attend some personal work. He was gone for around 45 mins! Atleast this time he didn’t play bad songs like he had done on our Khandala trip.

Next Stop – Pune and Khandala was last modified: October 22nd, 2019 by Reema

How many time have you traveled from Chandigarh to Himachal and never paid attention to what lies on the way? Although this is the…