On 22 June 2000 (seems like yesterday), me, Nikhil and Nitin decided to visit rishikesh. I don’t remember the intricate details of the journey now but would try to narrate the actual events as I remember today. I would like to thank Nandan and Shekhar for inspiring me to pen this down. Sadly, the post does not contain any pictures due to the lapsed time. Both Nikhil and Nitin (we called him Chandru since he had eyes like Chandrachoor singh – always intoxicated) agreed to the trip at the shortest notice since Rishikesh and booze could never keep us away for long. We decided in the morning and went to the DSIDC government approved liquor shops (what law abiding citizens we were!!) to purchase the stock and supply of life tonic for our journey. 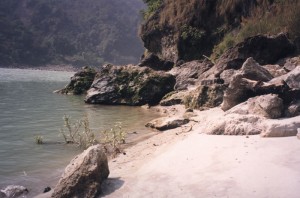 We set off from Delhi around 1.00 PM and reached Rishikesh bus stand at around 7.30 PM. The journey between Delhi and Rishikesh was very uneventful. It was dusk time and we promptly hired the shared auto rickshaw to Muni ki Reti. We had borrowed a 4 men tent and 3 sleeping bags for our trip from our friends. Usually these short stints to Rishikesh involved a mixture of masti (booze + environment) and bit of religious visit (of course in more sober times).

We reached Lakshman Jhoola and started walking on the other side of the jhoola. (Please note that we do not want to hurt the religious sentiments of anyone and at that time we believed in more than peaceful existence of us (boozing around) as well as god around us without a fuss). From Lakshman Jhoola, we kept walking left towards the road leading to Harihar Peeth and eventually to Neelkanth Mahadev. We kind of walked for around 1.5 km in that directions since we were on a look out for a peaceful beach but all we could see between us and Ganges were these small houses with guest house board in front. By the time the settlement ended on our left hand side, we realized we had actually reached the starting point of the jungle and we could see that the road started slowly winding up. It was really dark by now and we realized that the time was around 9.00 PM. There was no street light and occasionally we could hear dogs barking at some distance.

It was already dark so we descended the road at the sight of first beach on the left side of the road. The settings were a bit scary since we could hear a lot of noises of small insects (crickets), dogs barking at a distance, sounds of tree branches swirled by the monkeys and song of the river Ganga flowing beneath. From time to time, the cool air was hitting us on our faces reminding us that we were out of the gas chamber of Delhi and into the nature’s lap for some good time. Even though we were longing for this time out, yet this setting did not seem to be most ideal (bit scary). We reached the beach after making our way through the trees and bush. The setting was beautiful. It was worth all the discomfort we had undergone since afternoon. The valley looked stunning in decent moonlight. Ganges was flowing in a rhythm and occasionally we could see the light of some vehicles (though very less since it was past 9.30 pm by now) on the other side of Ganga. This was the road leading to Devprayag.

We set our tent without further delay and started enjoying the drinks. After a couple of hour and a couple of drinks, the temperature dipped and we decided to call it a day and entered the tents. Next morning was straight staring into heaven. We came out of our tents, sat outside on the beach and enjoyed the cool breeze and the sunrise. The first rays of sunlight touched us. The sunrays felt so innocent, so pure that they kind of cleansed us inside out. It was a perfect setting of the wonderful day. We cleaned up the beach (responsible hikers) and went back to lakshman jhoola. We did not have a plan in mind so we thought that the next night should be spent somewhere on a ridge since the previous one was spent in the valley. It was one of those times of the day when everyone was fresh, full of energy and hence, any idea seemed the best idea ever thrown and accepted. We decided to head to Chamba for our next night.

After a heavy and fulfilling breakfast, we went back to the local bus depot and boarded the bus to Chamba. The bus reached Narendranagar (17 Kms from Rishikesh) in no time. The ever beautiful white colored corridor of the main bazaar looked splendid in the bright sun. The bus slowly moved towards Agrakhal which is the highest point between Rishikesh and Chamba. By this time, the bus was nearly full and we were enjoying the company of the local natives plying between the two towns.

It kind of looked like a scene out of National Geographic channel since here were three urban lads with hiking material sitting among the natives in a local bus. Most of the men were staring out of the window into the horizon while the women were attending to the small kids. Most of elderly men in the bus were smoking desi cigars (beeri). The bus started the descent towards khari (15Kms of descent from Agrakhal). At a distance, we could see beautiful snow clad mountains and that was brewing fresh ideas into our bird brains (most of brain nerves had died due to excessive drinking back then). We saw a lot of trucks on our way carrying iron girders and we were told that these were heading for Tehri Dam (back then the construction was ongoing). We reached Chamba around noon and soon realized that this was a town where hardly we could peacefully spend our evening. Especially after a nice and quite last evening in the valley, we were not in a mood to tent ourselves in someone’s backyard. We decided to lunch there and move to Kaddukhal. As we moved from Chamba, we saw the diversion from where the road towards right was heading to Gangotri. We started our journey on the road towards Dhanoulti.

CA and MBA by profession but a ghumakkar at heart. Sleep with maps on my bed. I am nicknamed SUV (by my brother) for my size, intensity and ever insatiable urge to visit new places.

But there is no connecting bridge. What we experienced here was something amazing and unique. A huge barge operates between the banks to transport vehicles. We drove our car to the barge, sat inside it and the barge took us to the opposite bank. Huge size lorries and buses are also transported in the same manner. It was a memorable experience sitting inside the car and floating on the river.