Situated on the border of Ontario (Canada) and Buffalo, NY (USA), the mighty Niagara Falls is composed of the Horse shoe Falls on the Canadian side and American Falls in USA. The Horse shoe falls is 173 feet high and 2600 feet wide while the 1068 feet wide American Falls drops to 100 feet pushing between 4 and 6 million cu.feet of water per minute, making Niagara Falls the most powerful waterfalls in North America. 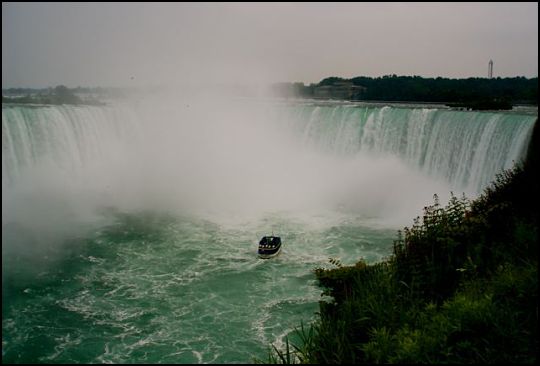 A four hour flight took us from Edmonton to Toronto on Sunday, August 2nd via West-jet. After a brief stay in Toronto we drove to Niagara Falls on Tuesday morning. After passing the city of Hamilton, we took the scenic route along the Niagara river, and arriving at the Falls on time for lunch. The thunderous roar of the Falls greeted us as we approached the legendary falls.

We had a suite reserved at the Niagara Falls Hilton ($325.00), with a view of both the American Falls and the Canadian Horseshoe Falls from our sitting room on the 32nd floor. The initial view was magnificent. 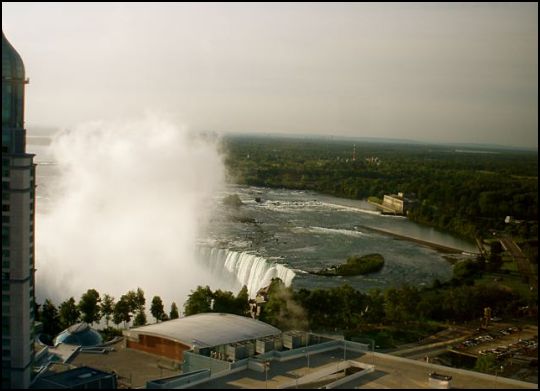 After taking some quick photographs from the Hotel, we left to see the Falls up closely, by climbing down a 2 km long steep hilly road. Here we joined thousands of tourists from all over the world on a wide side walk, taking photographs from different angles of both falls on the way.

While watching the mighty Horse shoe Falls, we have noticed a boat filled with passengers awaiting to see the Falls from below. They were all wearing waterproof overalls to protect their clothes from getting wet from the powerful sprays. 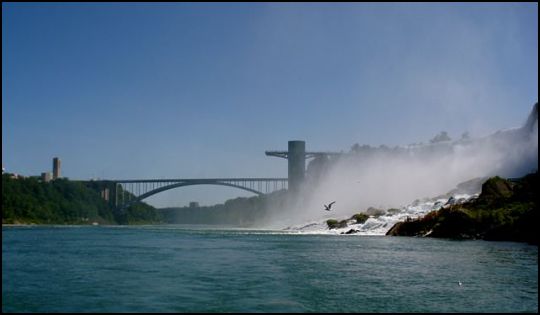 MAID OF THE MIST: That’s the name of the boat that takes you to see the Falls up close. We lined up and purchased tickets (about $15 each) and boarded the boat. There were nearly 100 people in this boat – all wearing a thin blue plastic coat. The excitement reached its peak when the boat actually came very close to the base of the Falls, as it was powerful enough to blow you away. Everyone felt the impact, and suddenly we were blinded by the misty spray until we backed off from the rail and retreated to the middle of the boat. I hurriedly wiped off the water from the camera lens and continue to photograph one of the seven wonders of the world.

Back to the land, we walked around the town and visited souvenir shops – all nearly packed with tourists. It is estimated that 28 million tourists visit Niagara Falls in 2009, with July and August being the peak months when the students are out of school.

Exhausted with walking, we returned to the Hotel. The Hilton had three towers; South, Central and North Tower, and each tower has 6 elevators and every one was filled with tourists, waiting time up to ten minutes to get into one. Our vehicle was parked by the valet, and to get it back there was a 45 minute wait that evening. Leaving the van behind, we hit the roads once again.

Niagara Falls area have several restaurants. We went to Applebees, a modest dining place with a reasonably priced menu (Hamburger with cheddar cheese $13.95). While having dinner, we discussed plans for the following day. 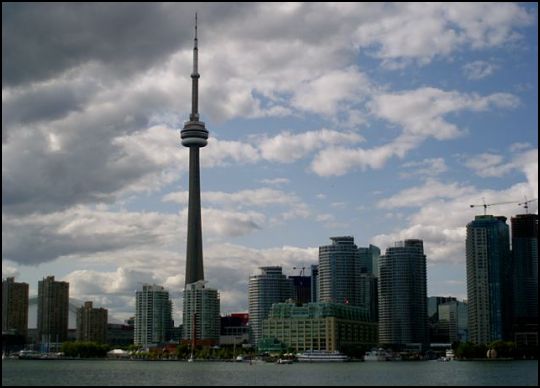 Skipping the hotel suite, we went straight to the Falls Casino, which probably housed a thousand slot machines, card tables and other gadgets to grab your money. The Casinos here are designed to win 90% of your money. Knowing this, we played, like hundreds of others there, and lost, and justifying the loss as part of the fun in a fantasy land! By 11pm we called it a night and headed back to the Hotel for a shower and bed.

Next morning we woke up in time to witness the sunrise above the Niagara Falls. It was gorgeous. Both American and Horse shoe Falls appeared to be calm. We got dressed after showers and headed out for breakfast.

Close to the Hilton, there was a restaurant with a sign saying “All You Can Eat Breakfast for $6.99”. It was a buffet with lukewarm pan cakes and tasteless French toast supplemented by scrambled eggs and bland fruit salad. The waitress asked us if we want orange juice or coffee. We all ordered juice and tea or coffee. Suddenly the $6.99 breakfast became $15 breakfast for each person by tricking you with Orange juice ($4) and Coffee or Tea (3.50) each. Stores like these are designed to rob the people, and it reminded me of the literature I read about the Alaskan gold rush days and Canadian Klondike days where those who found gold were robbed by fast talking ruthless men and prostitutes. 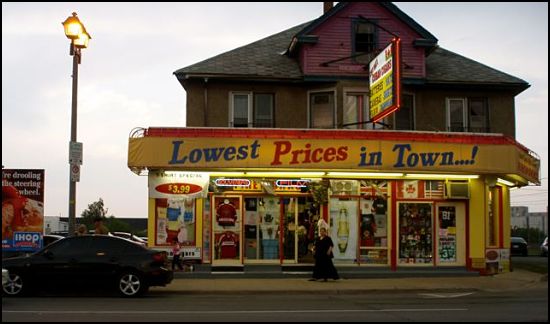 Travelers arriving at the Canadian side of the Niagara Falls can cross a bridge to enter the United States provided they have valid travel documents, such as a passport which is now mandatory for all travelers entering USA and vice versa. I have visited Niagara Falls twice before, and until 9/11, entering the US was regulated by less stringent laws. The Rainbow Bridge connecting Ontario and Buffalo offers an excellent view of both Falls, the sight from the Revolving Tower is also spectacular. If you happened to be here, enjoy a meal at the top of this tower which is equipped with a revolving restaurant.

There are several sight seeing places in and around Niagara Falls, especially if you are on the Canadian side. There is a large IMAX theater that shows a film on Niagara Falls and some adventurous souls who attempted to perform daredevil acts there. There is also a wax museum here and a delightful flower garden.

Souvenir shops sells all kinds of junks, especially T shirts, ball caps and spoons marked Niagara Falls. Street hawkers invite you to buy tickets at bargain prices to participate in various package tours. The town is filled with all kinds of activities for adults and children, and there is not a dull moment here. If you want to visit Niagara falls during peak season, prepare to face the huge crowd and congested traffic.

When we checked out in the morning, we had to wait over an hour to get our vehicle back. Again hundreds of guests were checking out at the same time. The lobby, the waiting room, the elevators were all congested.

If I ever go back to Niagara Falls for the fourth time, it won’t be in the Summer time. It will be in March or April, or September/October in off season. During Winter months there is not much activities here. Hotels and restaurants are nearly empty, and they all provide deep discounts to boost revenue.

There are various Hotels in this area to suit every one’s budget. Remember, you will get better deals before and after the peak season. The nearest airport is Niagara falls/Buffalo International. The Falls is 27 kms from the town of Buffalo, New York state, and 125 kms from Toronto. Despite the minor drawbacks, Niagara Falls provide a fabulous experience to the visitors, a feast to the eyes and a paradise for the photographers.

Traveled a bit, covered Canada from Atlantic to Pacific, visited various parts of USA including New York, Minnesota, Washington, Montana, Buffalo and North Dakota; traveled in India from the Himalayan foothills ( Naini Tal) to the Cape Comorin in the south; European visits include Holland, France, Germany, United Kingdom, Sweden and Denmark; took part in photographic safaris in Kenya and Tanganyika, and toured in Dubai and Abudhabi. All time favorite author: Jim Corbett

“Where are you from?” asked the unassuming bong in a pink half sweater. However disappointed I was with him, I had to answer, “From…