We were 6 of us, boys – I, Amby, Ekansh, Avnish, Amit and Gourav who decided to see the ‘Paradise on Earth’ and booked a rail ticket from Delhi to Udhampur for 20-Dec-2013. On the day, we boarded the metro from Gurgaon for New Delhi Railway Station. Ekansh was carrying good dinner to avoid the train food and we all had our dinner in New Delhi. Gourav boarded the train from Ambala station at mid night with a parcel of “सरसों का साग और  मक्का  दी रोटी” that was prepared by his mother for the gang. Thank you, aunty, for our morning breakfast.

On the morning of December 21, the train arrived on Jammu railway station and then proceeded to Udhampur. Our excitement levels were high because we had reached right in the lap of the Himalayas. After reaching at Udhampur, we booked a 6-seater car for 5 days, run by the driver called Nazeer. Mid way, as we reached Kud we took the break for tea and also got a taste of the local sweet called “प्रेम का पतीसा”.

After crossing the Jawahar tunnel we started noticing small snow covered mountains and after 10-15 minutes we got a great welcome with nothing short of a snow fall! We stopped the car at Titanic Point to enjoy the first snow fall of our lives and for a quick photo session. Amby, Gourav and Ekansh also bought caps from here.

At Titanic point after crossing the Jawahar tunnel

We reached Pahalgam in the evening and everything was clean with no snow at all and after 1 hour heavy snow fall started and covered the entire city with a white envelope. On early morning of 22-Dec, we took a walk in order to see the city and saw the Temple, Gurudwara and a beautiful Golf course covered with Snow. We playfully had snow fights in the Gurudwara after that Amby pushed us guys to the Golf Course and we got warm with hot tea in Golf Course.  After lunch, we checked out from the hotel and left beautiful Pahalgam city for Srinagar. 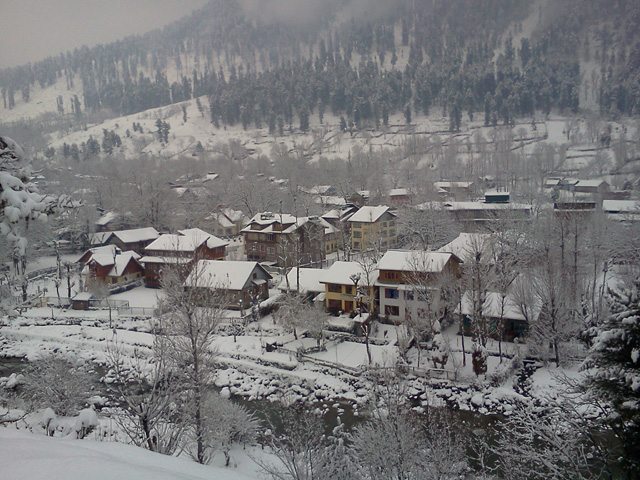 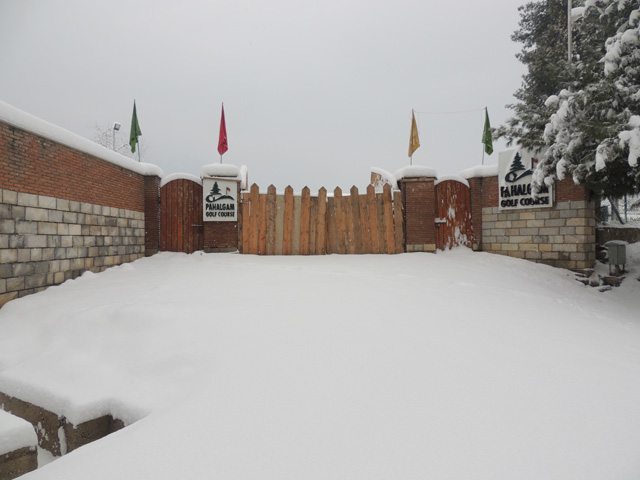 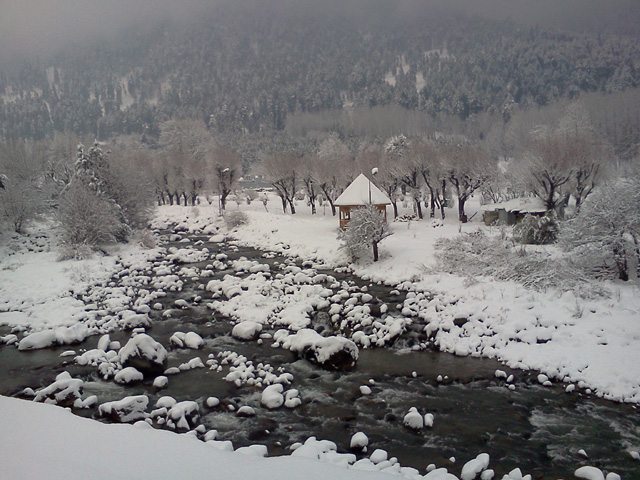 Snowfall continued in Pahalgam. Nazeer, our driver, also described and shared stories about Kashmir with us on the way to Sri Nagar. We reached around 4 pm; Srinagar was cool but no snow at that time. We decided to see Sankaracharya Temple first and then checked in at Guest House. Sankaracharya Temple is on a hill and we need to climb 200 stairs to view God Shiva Temple. Sankaracharya Temple is one of oldest and beautiful temples but camera is not allowed there. After the temple we moved to Chashme Shahi as Nazeer suggested, and took lots of photos and enjoyed some street shopping. 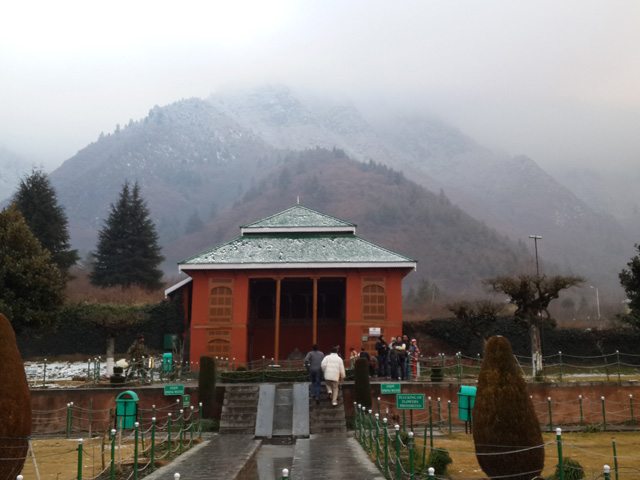 We came to the guest house and after refreshments, we went for dinner at Krishna Dhaba. In the night we played card games and planned for the next day. We all were in one big room with 3 king-size double beds. So, 2 people needed to share one bed but no one was ready to sleep with Avnish.

Next day, i.e., 23 Dec, we left for Sonmarg and stopped at Panjabi Dhaba near Sindhu River for Paratha and tea. Amby told us a the story about Sindhu river that this river has a reverse flow and goes to Pakistan from India. Continuos snowfall followed us to Sonmarg and we felt that Kashmir really is the paradise on earth. We cannot explain the lovely way to Sonmarg. We enjoyed a lot and very heavy snowfall continued. Each time we would run to sit in car for the front seat. Amit and Avnish were always fighting for this. That was funny and memorable moment for us guys. 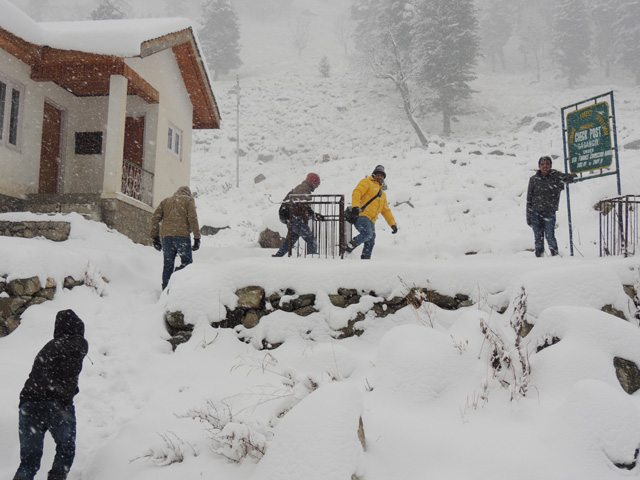 My best picture captured in Sonmarg. Thanks Avnish for this picture. But Anvish was still learning about his new DSLR camera which he bought for this trip. 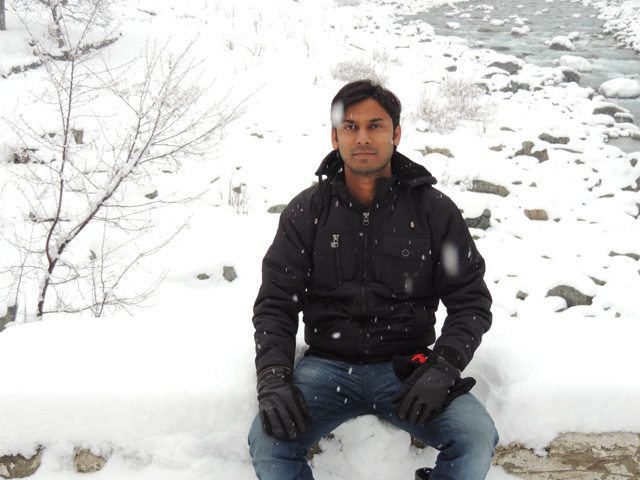 Local villagers’ children had cheeks that resembled Kashmiri apples. So we could not resist clicking their pictures. We also enjoyed Kasmiri songs as visited the villages. 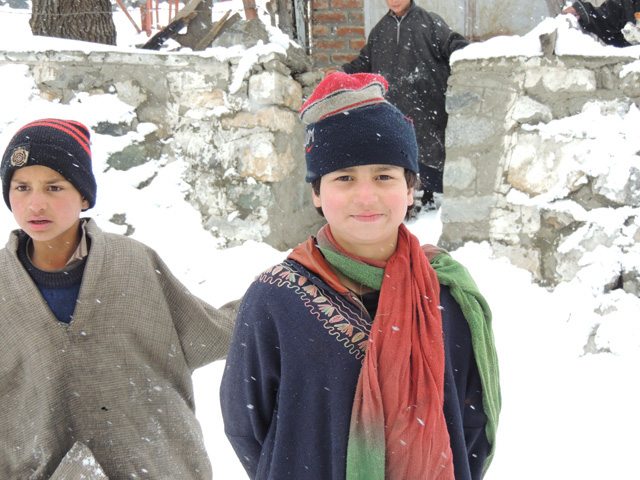 Child in the village near Sonmarg

Our gang with the children


Due to a very heavy snow fall, the road was almost blocked and all the vehicles were moving like bullock carts. Our car was also in trouble most of the time and we needed to push the skidding car.

Pushing the car to move 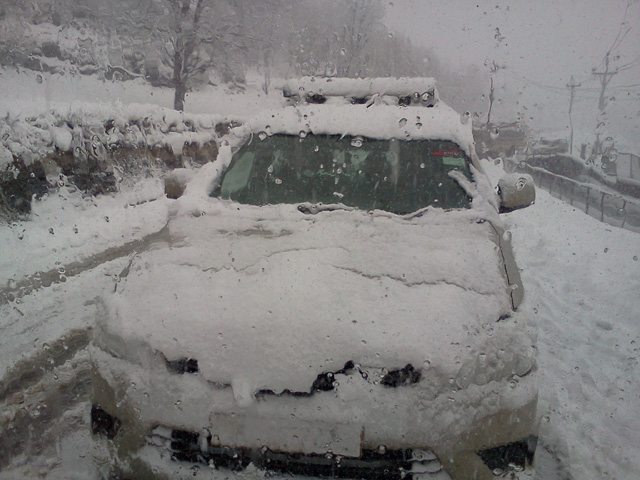 Our car in Sonmarg after 1 hour

We returned to Srinagar around 8pm and went for a delicious dinner at Mugal Darbar Hotel. Amit was always asking for “नादरू यखनी” and “कहवा” in every hotel but always got no for the answer because this time was not for “नादरू यखनी” (the lotus stem cooked with curd). After the dinner, we came back to the guest house and played card games.

The next day, we moved for Gulmarg and left the guest house around 7:45 am. It was a special day for me because 24 Dec is my birthday. We were around 10 km away from Gulmarg valley and Nazeer said that we needed to take a local vehicle from there because a driver from outside is not allowed to drive from there. Nazeer also shared that 2-3 vehicles slipped down the hills only a few days ago. The road was covered with snow but no snow fall here. Driver stopped the car in mid way and pointed that IBN7 news team was waiting for tourists to capture news for Christmas. News team selected us guys because we all were wearing Christmas caps. That was our first interview taken by a news channel and we got surprised in Gulmarg. That video clip was published by CNN IBN7 new channel on 25 Dec. 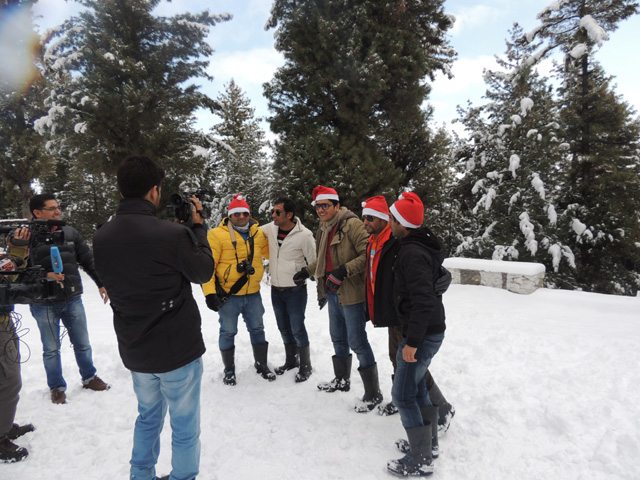 After reaching Gulmarg, we hires a sledge cart to reach the Gondola booking office. You can walk till the office but we wanted to experience every different thing. The sledge cart helper used his legs as brakes to stop the cart. So Amby’s cart impinged with some tourist and he fell down but thankfully was not hurt. We also want to salute our military people who were for our security. 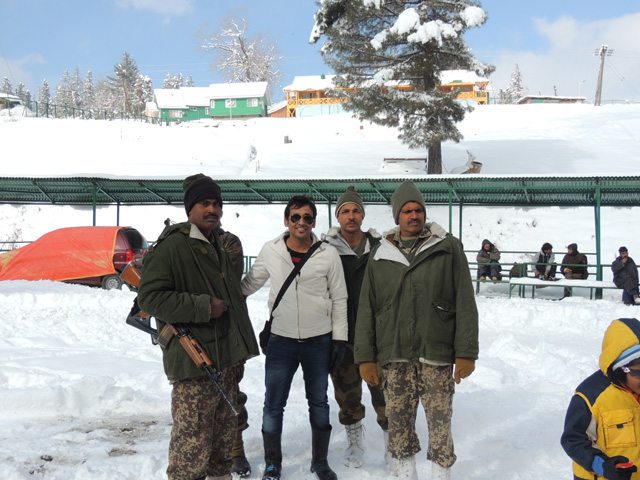 Gourav with the Military people, in Gulmarg 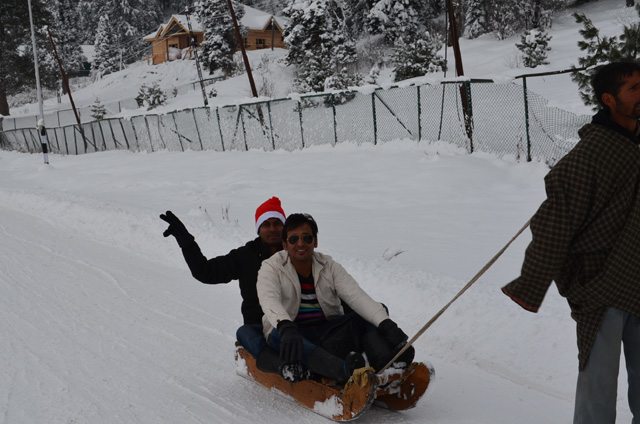 Gourav and I enjoying the Sledge cart

We also tried making a snowman in Gulmarg but instead of making a snowman we created a Ramu kaka.  We took Shawl from newly married couple’s snowman. One funny incident was that Amit called her aunty who gave the shawl. Amit is on the left of the snowman in below picture. 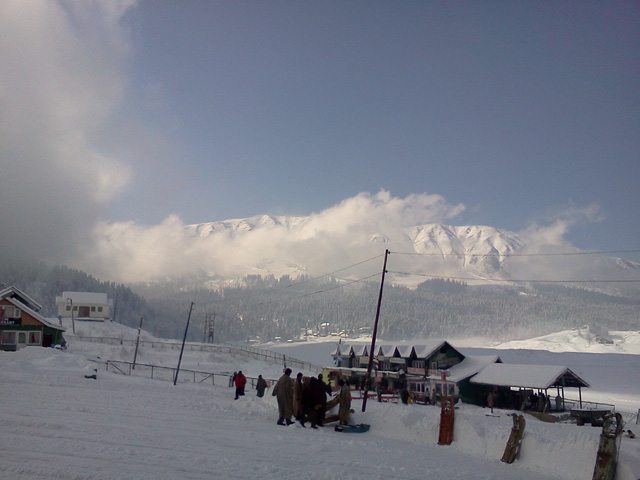 Gondola ride was also one of best experience in my life. We enjoyed a lot in top of Gulmarg valley.

Ready for the Gondola ride

We returned from Gulmarg to Srinagar around 5pm and went to Lal Chok market for shopping. We bought shawls from market.  After shopping, we got to see Lal Chok. We always heard about Lal Chok in the news. So we were very excited. A small sitting area is at Lal Chok to relax and that part enhanced the beauty of Lal Chok. 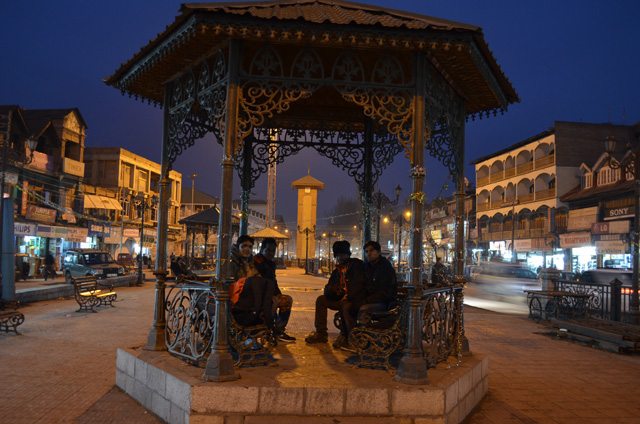 Some guys had the dinner at a restaurant called “Mummy Please” because that restaurant was for non- vegetarian only. Amit was still crying for “कहवा”. So we went to Ahdoos Hotel for Kahwa. We ordered Kahwa and Firni sweet. Avnesh, Ekansh and Gourav came with a cake to celebrate my birthday. That was the very happy moment for me. Thanks you guys for a lovely birthday celebration. 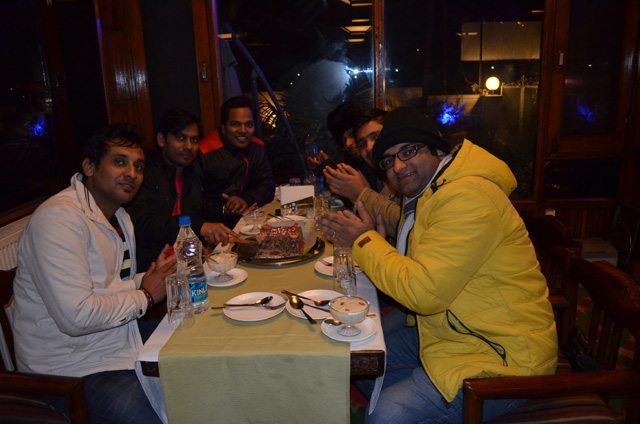 Celebrating my birthday in Ahoods hotel

25 Dec was last day in Kashmir and our flight from Srinagar was around 2:30pm. So we packed up early in the morning because the last thing pending was a Shikara ride. So we went to Dal Lake for the Shikara ride and also covered Mina market. 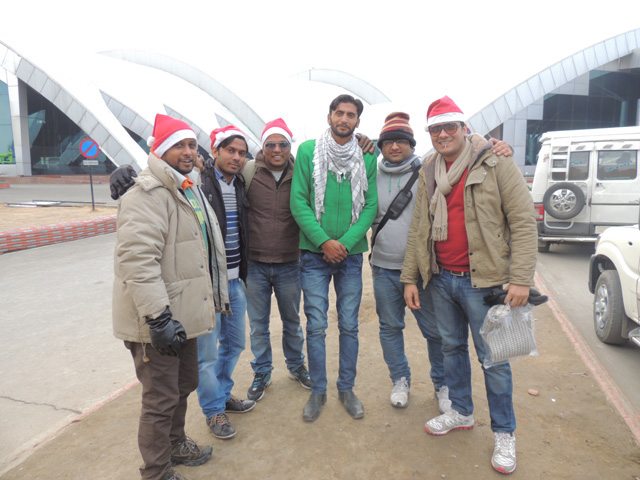 With Nazeer at the Srinagar Airport

Amby and I at the airport

After a 1-hour journey we were at the Delhi Airport around 4pm and my mobile started working. So I first checked-in on Facebook to tell the friends and family that I am fine. We promised to visit Kashmir at least one more time during summers and thanked Amby for this trip. Thanks for reading my experience. This is my first blog, so please give your feedback and suggestions.