Recently for the biodiversity conference the city of Nizams and Qutub Shahi rulers was decked up to impress the foreign delegates. Many trees were uprooted to clean up the roads to the convention center in typical sarkari style totally forgetting the role the trees play in a city. But one good thing that happened to impress the delegates was that various government departments cleaned up some of the tourist attractions like Charminar, Salarjung museum, Golconda fort and also the Qutub Shahi tombs.

Our photography group HWS or Hyderabad Weekend Shoots organized an evening photo shoot at the Qutub Shahi tombs and we reached there in large numbers. I was one of the first ones to reach there and started clicking pictures to take advantage of the beautiful light.

At the entrance itself we were ambushed by newly trained guides who mistook us for delegates of the conference seeing all the guys with cameras. On learning that we are Desi Travelers who just want to click some pictures they were a bit disappointed and vanished like neta log after elections. 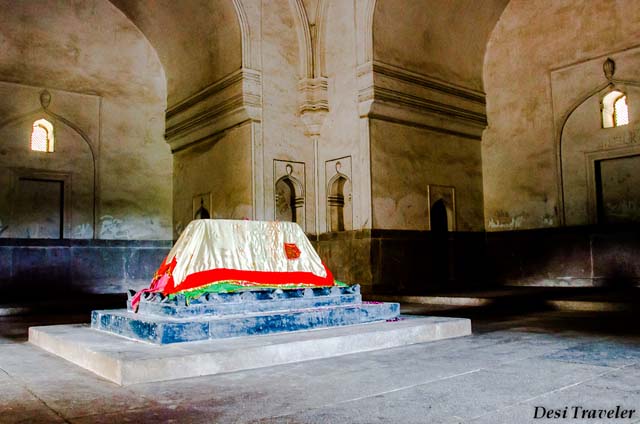 The Qutub Shahi tombs have a unique place in the history of Deccan and India as buried here are the rulers of Deccan from 1518, till Aurangzeb captured the Golconda fort by deceit and took the last emperor prisoner and shifted him to Daulatabad. So except for the seventh king Tana Shah (Abdul Hasan Qutub Shah), the previous 6 rulers and other members of the royal family are resting here. For a long time the tombs were in bad shape, but now they have become a good tourist attraction and are being maintained by the government. In total there are 7 main tombs of which only one main tomb belongs to a women Hayat Bakshi Begum who was related to 5th, 6th and 7th Sultan. There are other minor tombs to various generals, physicians, relatives and also of singers Taramati and Premamati.

As the tombs are considered to be sacred by the locals in Hyderabad please take off your shoes before entering the individual tombs. You can wear your footwear while moving around. As the tombs are surrounded by very densely populated area they provided a green lung to the highly congested area around and you will find a lot of families with kids playing around. Please be careful not to take pictures of ladies and kids without permission as some of them could be sensitive about the same. I was trying to click some pictures of the reflection of one of the tomb in water and the result is the picture given below. You can see reflection of a family sitting on the edge of the water. 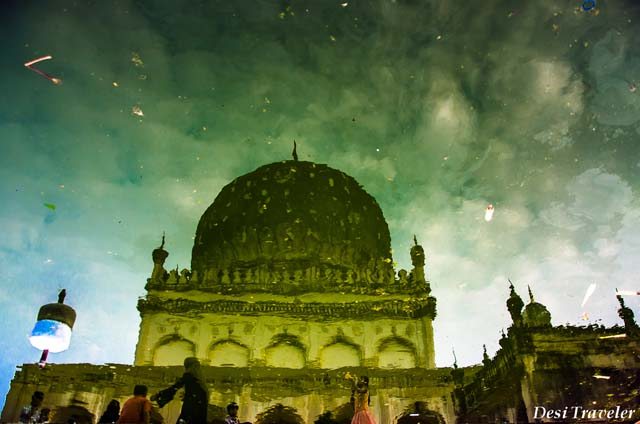 The tombs at one point must have been very grand and decorated; one can still see beautiful azure tiles on some of them. Each tomb though following same basic design has its own personality and the grandeur probably is a symbol of the financial health of the empire in those days. The tombs are very close to the Golconda fort and both can be covered in same day. In case you are not planning elaborate photography you can do Tombs first and then go to the fort to see the song and dance show. If you want to photograph the tombs in sunset then you have to them after the fort.
There are 2 water bodies in the tombs area, both were used as bathing places and both still have water, unfortunately people have been throwing all kind of stuff in them and they are not in very good shape. I wonder why we do not respect our heritage and make the very places we want to showcase to the world dirty. The good thing is that the tombs are very spread out and there is a lot of open space that is used for playing by lot of visitors. The area is full of green trees and small fountains some of which have water though we did not found any of the fountains working except for some water escaping from the broken pipes used for sprinkling the grass. 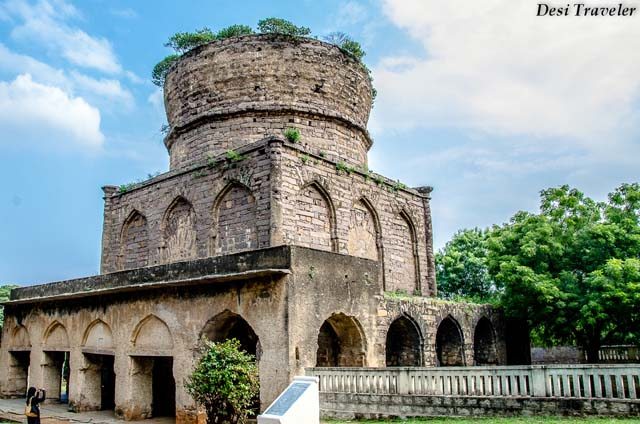 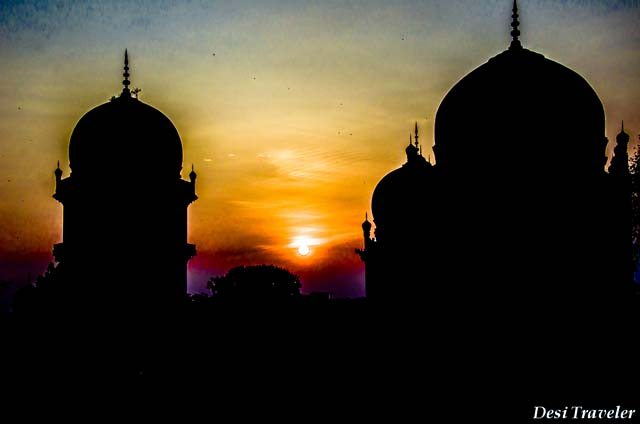 A beautiful sunset at the Qutub Shahi tombs

While I was taking pictures in one of the step well I saw this young boy looking at me wondering what I am doing in the small stairs, I smiled to him and asked him with gesture if I can take his picture, he just nodded and we have this picture here. He looked very divine standing at the top of the narrow stairs in his spotless white Kurta pajama almost as if floating in air above the stairs. Later he came down as he wanted to clean his feet and hands in the ancient step well before offering his evening prayers. 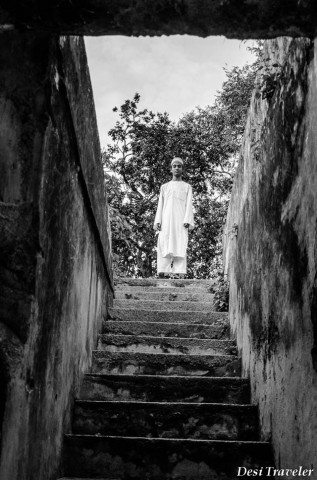 Totally opposite to this boy was this other one hell bent on proving that Darwin was correct and if not all at least some humans evolved from monkeys.

Beautiful blue tiles are all gone except for some

True to the secular tradition of Hyderabad surrounded by tombs of Islamic emperors there is a small Hindu shrine under a huge tree managed by an old lady. The shrine seems to be highly revered by the locals as I could see fresh decorations and some left from Bonalu festival earlier in the year.

The tombs have ample parking space and you are allowed to take camera by paying 20 INR fee, the entry fee is INR 10 and the parking charges are INR 20. They are open from 9:30 am to 6:30 pm. There is also a small AP Tourism restaurant-Haritha, though we did not try it. Over all the tombs are a great place to visit, they are very close to the IT part as well as Old city and Golconda fort. If you like taking pictures they are a great place to capture a piece of history, as nowhere else a whole empire rests surrounded by the cacophony of a city they built hundreds of years ago. Do carry some mosquito repellent crème with you if you plan to stay till sunset.