After our lovely outing in Dal Lake we all were refreshed totally and hunger had started spreading its wings now. There were numerous Dhabas, fast food stalls and restaurants on the opposite side of the Boulevard road. All of us decided to have something at NATHU’S, the famous eatery having many branches in Delhi. The place was filled up totally and the token system ensured another one hour wait, so much rush there but everyone decided to have something there only instead of going somewhere else. There was less rush for pastries and ice-cream and this was the demand of kids in the party so kids were not a problem as waiting period at the eatery at that time was a long one. A good variety of snacks and  proper lunch was available there. Our take was a mix of south Indian and North Indian in form of Dosa , Chane Bhature and Chaat and stuff was quite delicious one. With our stomachs happy we all decided to go to Nishat Bagh , one of the Mughal gardens situated on the bank of the Dal Lake. So Bhajji (our driver) was summoned and vrooooom in 5 minutes we were in front of Nishat Bagh, the famed garden. 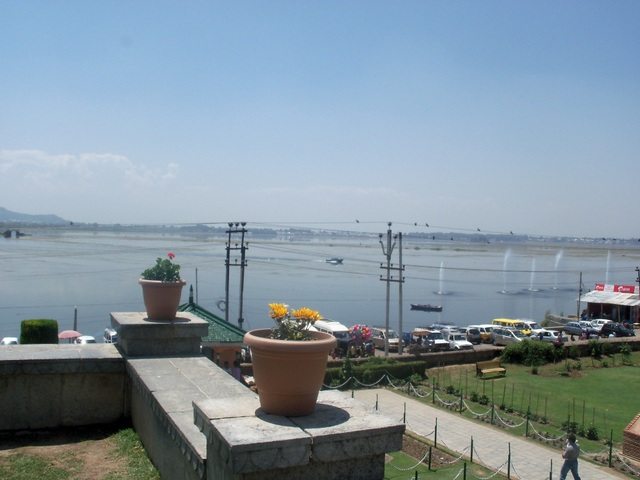 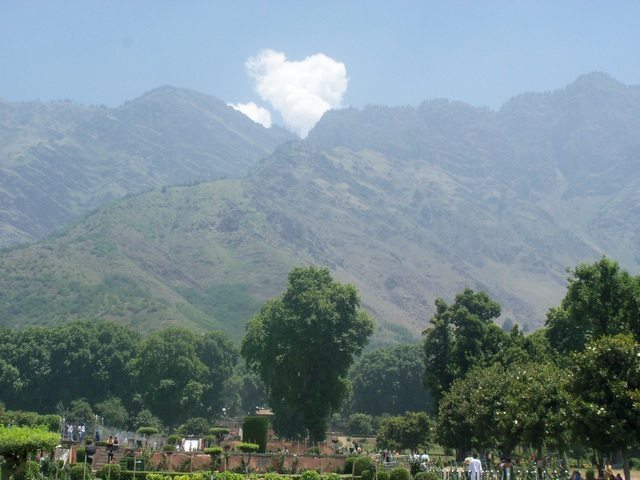 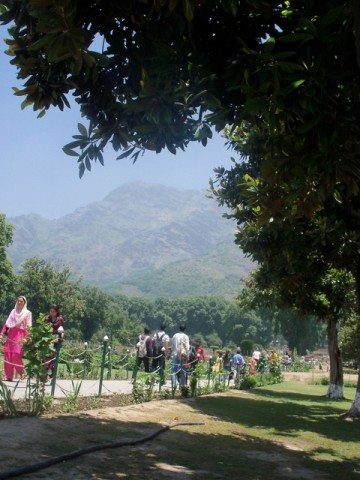 NISHAT means joy, khushi and whence this garden is the garden of joy. Though not as large as Shalimar garden, this garden is more beautiful than that and quietly bring smile on your faces. Numerous fountains adore this garden and is a famous picnic spot for the native people. When we visited this garden 2-3 school trips had come there and children were enjoying themselves in the soothing ambiance. After entering the garden when you see towards the direction from where you have come, vast and sprawling scenario of Dal Lake enthralls you. 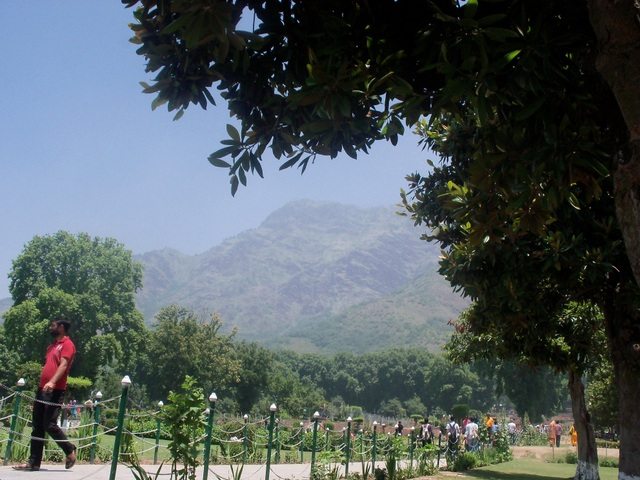 A view of Nishat Bagh 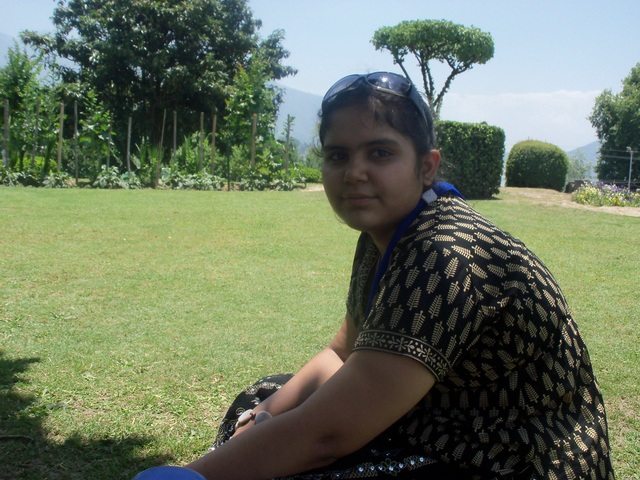 Bhakti sitting in the Bagh

Ticket rate for entry to the garden is quite nominal one . Happiest members of our group in the garden were kids as they had got ample greenery to run, jump and enjoy themselves.

HISTORICAL BACKGROUND OF THE GARDEN....

Though famous as a Mughal garden, this Bagh was not built by any Mughal emperor but  Asaf Khan, brother of Noorjahan and father in law of Shahjahan in 1633. It is said that this garden of gladness when completed in 1633 became an object of desire and jealousy for Mughal emperor Shahjahan who wanted his garden to be rechristened as the Shahi Bagh but Asaf Khan was not ready.Though father-in-law of emperor Shahjahan, latter was not ready to hand over his labor of love to the emperor. Kashmir was their summer sojourn. When Shahjahan visited Kashmir in the summer of 1634 , he ordered to cut off the water supply to this beautiful garden . The source of water supply was the same as that to Shalimar Bagh (the royal garden). The garden (Nishat Bagh) fell to the jealousy of an emperor and all beautiful fountains went dry. Asaf Khan became sad at this but could not do anything against the emperor’s orders. One of the employees of Asaf Khan could not bear it all and restored the water supply and one morning Asaf Khan got this nice surprise. And what happened when the news reached the emperor.  He summoned the employee and rewarded him for his loyalty towards his employer. Shahjahan forgot his claim over Nishat Bagh. Hail both the Mughal gardens… Asaf Khan might have sung this song... BAAGON MEIN BAHAR HAI..… 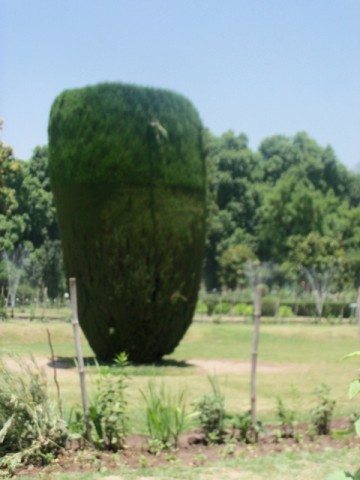 The garden boasts of 12 terraces, each terrace having beautiful fountains. 12 terraces as I have found out is because of 12 zodiac signs. This beautiful garden lies in the lap of Zabarwan hills and last terrace known as zenana terrace covers full width of the garden. Lush green carpet of grass adorn this garden and all of us (elders in the party) rested for a while there and kids played a lot. The time just flew out and the beautiful dusk had engulfed the area now.

One could hum along ……. the beautiful song from “SHAGUN” 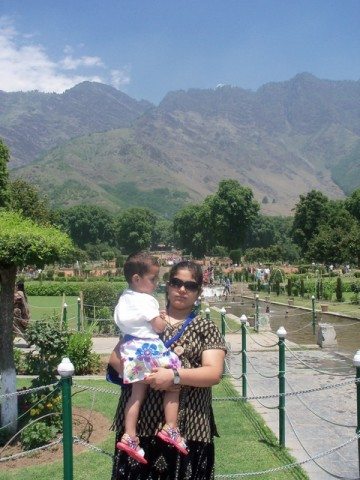 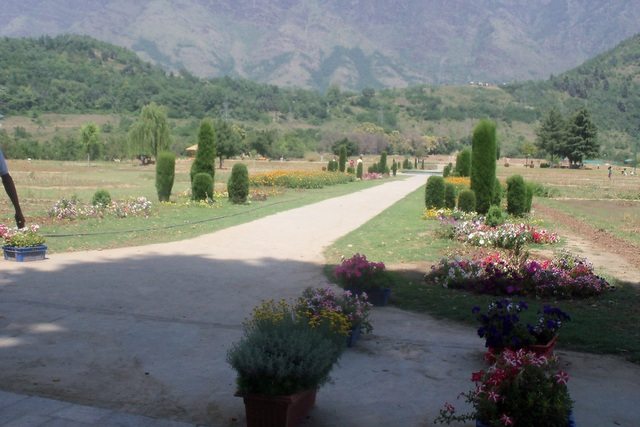 Another view of Nishat Bagh

Now all of us were ready to have dinner at some nice place  for a stroll and take our dinner at some place there . We decided to stroll for some time again on Boulevard road midst the pavement shopkeepers. At this time the road was full of tourists. Instead of proper  dinner we decided to have snacks in dinner from a nice looking eatery. So Tikki, Golgappas, Samosas and juice was our dinner that night before going back to our guest house . Srinagar,in theses 2 days had seemed to me like enigma and a beautiful veil which hides some and shows some. I still could not have captured the essence of the city which is modern just like any other big city with all the symbols ever present and on the other side seeped in antiquity, the old parts of city. Sometimes the city presents itself as a vocal city, quite alive and on the other hand an eerie silence pierces the city. This can’t be explained in words any more.

GHULAM AHMED MAHJOOR has been writing poetry in Kashmiri language which has inspired a lot of Kashmir’s people. He paid an ode to Nishat also in one of his poems , a couplet of which I quote here.

The poem is translated by Triloki Nath Raina.

#Yemberzal or Narcissus is the first flower to bloom in Kashmir after harsh winters.