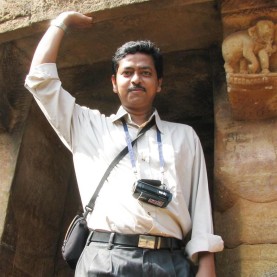 I am a bengali from Kolkata. I am a fun loving person with a passion for travel. I have been to many places across India and abroad. I also love photography and edit my travel videos into film like stories. Exploring new areas, diverse culture, people are my driving force to my hectic marketing job.I am an avid reader of travel magazines and also member of various travel groups

A few were really very nice. Having spent our time at Kalijai we hopped back into the boat and returned to panthanivas. After lunch we took a Tata Iris van and moved on to take a llok at some local places of interest. First we went to Nirmaljhar temple 11 kms away. Inside the small gate there is a small pond in the centre, a small temple on the left and the main temple on the right. A stream flowing from the Easter Ghats has been directed here into a small kund, The sweet sound of flowing water was the only one that could be heard. There was no other living being inside. At the rear, there are small deities of ‘Dashabatara’. Though the temple has immense significance we hardly saw any signs of maintenance. We moved on to Narayani Mata temple 10 kms away. This temple is situated atop Valerry hill. After ascending the loopy road our car came to an abrupt halt. There were several cars and busses ahead of us caught in a fierce jam. Each was having its free run with restless crowd of people don’t know from where created a ruckus. The lone traffic police stood helplessly. After failed attempts by our driver to make a way through, he asked us to make the rest of the journey on foot and parked the car. We started walking past the vehicles and crowd and made our way up the steep road.

I could not understand what we so many people doing here. The area was surrounded by jungle with ‘saal’ and other trees. As we climbed further up the road we saw groups of people cooking food on giant pots. That’s it! These local people are having a picnic, and what a place to choose – a jungle. Never before I had seen so many people (thousands) picnicking in a forest. After walking further we came into a clearing with several steps. There were few shops selling puja items. Manu devotees were buying these for offering to the goddess. After climbing one more flight of stairs we reached the temple sitting amidst the forest with trees and boulders hanging over it. There were lots of monkeys prancing around and I had to be very careful with my cameras. My son was however very amused. The temple complex had a small ‘kund’ and one side there were a few fallen tree trunks (courtesy phailin).

Next morning, had early break fast and went out to look for ponies as we shall explore Pahelgam on horseback. After some bargaining with the local pony owners we decided to visit Baisaran, Dabian, Kashmir valley & Pahelgam valley.We hired 3 ponies, one each for us and started off at a gentle pace. The pony attendants walked beside us guiding the animals. These places are some of the most beautiful locales in Pahelgam but can be explored only on horseback. So aged people and those who are not capable to ride ponies will be deprived from such scenic places. we moved on through the hilly trails and reached Pahelgam valley, a point from where the city can be viewed. Then we moved across streams, hilly terrain, boulders and reached a vast grassland called Baisaran or mini Switzerland.

The lush green grasslands, lined with pine trees and mountains beyond, were a treat for the eyes.After running around for some time we mounted on our ponies again and started moving down the slope of the mountains through the pine forest. By this time we had learnt to control the ponies with the reins. My son particularly was very excited. It was really an amazing experience. Next we arrived at Dabian.