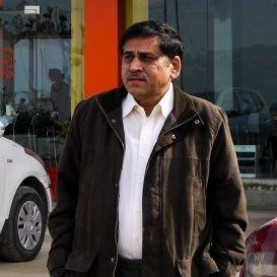 The tram brought me back to Centrum and I still had about 1 hour to wander so I walked towards the Dam area, which is a famous touristic spot, with lot of fun, museums, shops etc. There was Madame Tussaud wax museum also, but before the wax museum of London, it is quite small,…but still there was long que before it.

I entered the shop and saw one dark niece of Cleopetra silently deep frying the Pakoras, which are stuffed in Falafel. I asked her to make one for me by stuffing with some onions and other things. She quite rudely told me that she will give the falafel and I have to fill the garnish myself. In Lebanon, the Falfel is wrapped in a thin roti, like mexican tortillas. But she took a bread like “बंद” cut it from half and put the pakoras inside and handed it over to me for filling it with other things. I put the garnishes inside and tried it. The taste was no where like Lebanese falafel, but it was sufficient for a poor veg animal like me. Seeing my face, she asked If I did not like it. I told her that it was ok, but not like the one I ate in Beirut.

The statue is made of bronze with its hands spread. There are spiral stairs reaching the top of the statue. It is said that the face of the idol, changed direction turning from Beirut towards the christian side, after the civil war where many christians were killed by muslim extremists. Not going into religious faiths, I may still believe it because it is possible due to movement of tectonic plates.

Before, the main statue there is this famous replica of Michelangelo’s celebrated masterpiece, the Pieta sculpture of Virgin Mary holding the dead body of Jesus.

So there was Baal Temple, there was Jupiter, Fire, Moon, Mars and other temples which were there before Romans and before pheonician re-built them ! I was thinking was it some distorted form of Shakta tradition of Sanatan Dharam, which was followed here, because in Shakta tradition, Fire and other planets were worshipped and sacrifices of animals or even humans were present then.

Once upon a time… there was Lebanon which was called “Paris of Middle East”…and then something happened and the Paris and Pearl of the Middle East.. changed from heaven to hell…. Let us have a look and see what Lebanon has to offer now for Ghumakkars !

It was 2004 and I boarded Air India flight from New Delhi to Dubai for my journey to Lebanon.

The coastal plain of Lebanon is the historic home of a string of coastal trading cities of Semitic culture, which the Greeks termed Phoenicia, whose maritime culture flourished there for more than 5000 years. Ancient ruins in Byblos, Berytus (Beirut), Sidon, Sarepta(Sarafand), and Tyre show a civilized nation, with urban centres and sophisticated arts. Present-day Lebanon was a cosmopolitan centre for many nations and cultures. Its people roamed the Mediterranean seas, skilled in trade and in art, and founded trading colonies. They were also the creators of the oldest known 24-letter alphabet, a shortening of earlier 30-letter alphabets such as Proto-Sinaitic and Ugaritic.

Badrinath is at a height of 11,204 feet above msl. It is around 530 Kms from Delhi and the route is Delhi – Haridwar – Rishikesh -Devprayag-Rudraprayag – Karanprayag-Chamoli -Joshimath – Badrinath. Badrinath route opens in first week of May and is closed for winters after Deepawali.
If going by own vehicle, one has to reach upto Karanprayag or Nandprayag and take a night’s halt. If there are two drivers, one can easily reach upto Joshimathh and stay there, saving one day.
For train journey, the last station is Rishikesh, from where hired taxis, chartered buses, route buses and jeeps are easily available for Badri Nath.