After having good time in London for about 5 days we reached India…. finally.  We were welcomed by hot weather, mosquitoes, dust, traffic jams and noise pollution.  After spending 2 years in Iceland, these things pinch more… at least for a few months, till the mind and body remember their default settings.

A week was spent in Diwali festival, sending and receiving gifts meeting relatives and  friends.  Then we decided to go on the Himachal Yatra.  Whenever I go abroad or come back from there, I always visit Jwalaji temple because I owe my present position to the boon given by Jwalaji.  In 2011 I could not visit Jwalaji because I had to rush to Iceland on short notice, hence the first programme was to visit Jwalaji, to pay my thanks for all what I have got due to her blessings.

Laxman was ready to go with us with his skoda Laura automatic for our comfort .  On 17th Nov,2012, we started our MahaYatra at around 4 in the morning.  Soon we were on the highway.  There was no fog, so the speed was good.  NH from Delhi to Ambala was not in that condition as we saw it 4 years ago.  There were road works going on at many places, and the condition of the road was pathetic at some places…however the toll rates have increased.

As gathered from one of Nandan’s comment, we decided to try the new route to Ropar.  Instead of going via Chandigarh, we went on the Ludhiana road and took the road, just before the first toll plaza towards right, the path indicating Kharar.  The road proved to be a boon… it was newly laid with no traffic jams and soon we reached Kharar.  It saved at least one hour journey time.

Road from Ropar to Kiratpur had been at its worst, whenever we travelled on this patch… But this time, the road was great and the payment of Toll was a pleasure.  Passing Kiratpur, we started towards Anandpur Sahib. 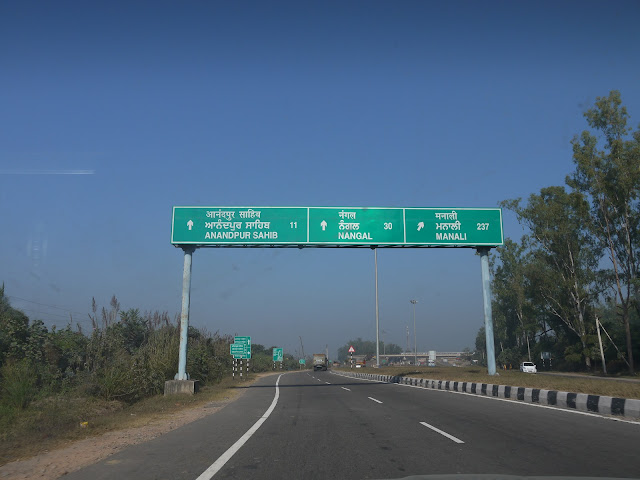 This patch of Road from Kiratpur to Anandpur Sahib has always been good, even when all other roads in Punjab were horrible.  The road is always in good condition with welcoming gates and flowers around. 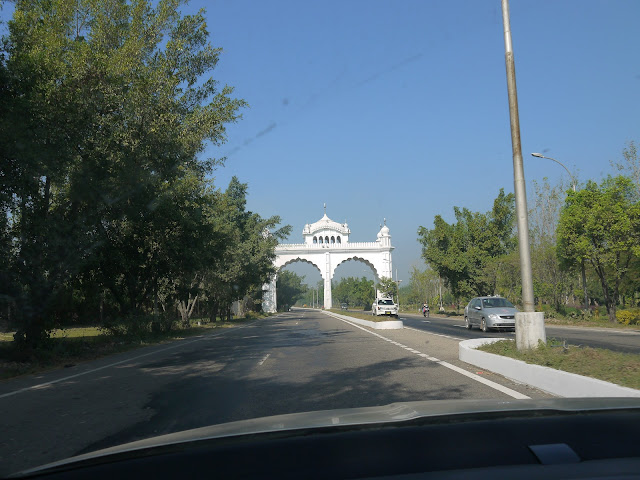 We reached Anandpur Sahib..brought our car near the main KeshGarh Sahib, clicked some fotos.  Anandpur Sahib Gurudwara is a historical place where Guru Gobind Singhji started the  Khalsa Panthh to fight against the tyranny of invaders.  BUT at the same place Khalistan was also declared by separatists and traitors.  The Gurudwara has a complex of many gurudwaras and KeshGarh Sahib is the biggest.  Since we had to reach Jwalaji today itself, we postponed the visit to Anandpur Sahib for return journey. 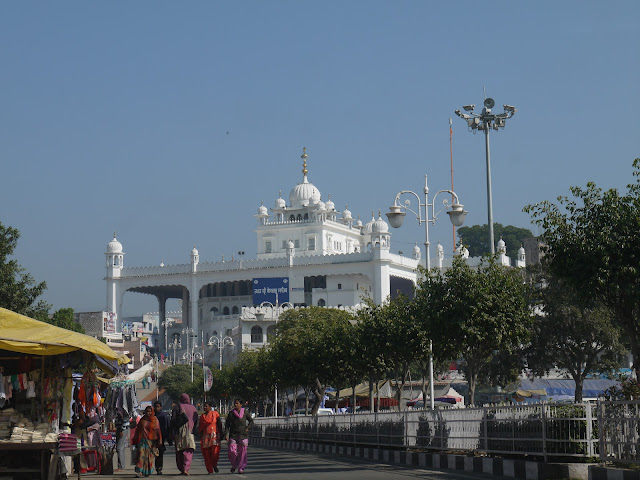 Just by the end of Anandpur Sahib, there is a right hand turn for Naina Devi.  We turned right and Naina Devi was in view.  Guru Gobind Singhji had great devotion for Mother Shakti.  He had done tapasya of Mother Kali in his last birth at Hemkunt  where Kali appeared before him and gave him two swords Miri and Piri (bravery & Spirituality) and promised him Moksha after he lays his life for saving hinduism, in his next birth. 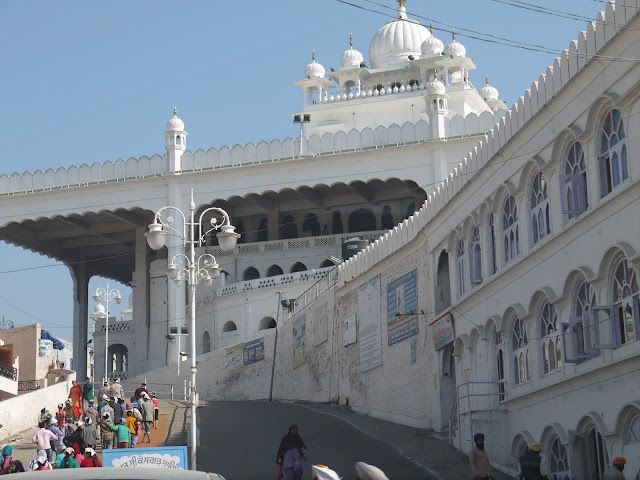 Another view of Anandpur Sahib Gurudwara

Guru Gobind Singhji remembered all his past births and has written about this in his book Bichitar Natak.  Guru GobindSinghji spent his childhood here with his father Guru Teg Bahadur Singh, who initially built the Gurudwara here. Guru Gobind Singhji decided to make this place his permanent abode..  just below the temple of Naina Devi, so that Shakti continues sending her blessings to him.   (Many separatist sikhs refute these stories due to propaganda of khalistanis… but a wise Sikh granthhi told me this story, which I re-confirmed after reading Bichitar Natak).

We had an interesting incident 8 years ago, when we were going to Jwalamukhi via Anandpur Sahib.  After Kiratpur we saw a huge traffic jam caused by hundreds of trucks full with sikh devotees going to Anandapur.  It was perhaps some big sikh festival and sikhs were stopping vehicles and requesting people to take Langar from road-side langars.  Hundreds of people were eating free meals from langars.  Time was around 2-30 pm and we were hungry.  A sikh stopped our car too and asked us to eat something.

We were feeling hungry so we left the car and sat by the road-side where they were offering food.  When food was put before us, my friend became health conscious and pointed towards the flies and the dust enveloping the food.  Afraid of possible food-poisoning, we left the food and dashed our car towards Jwalamukhi.  In the way, the car punctured and after we changed the wheel, it refused starting.  We waited long for some one to come and help us.  After wasting a good 3 hours, the car finally started.  When we reached Jwalaji, it was almost 10 and most of the shops were closed.  We went to the only opened dhaba and ordered our Lunch+dinner.

When the food came, I saw a fly in the dal and when I tried eating Ghobi Aloo, it was leaving cobwebs, means it had become stale and uneatable.  We shouted at the Dhaba man, left the food and went to our hotel and slept.

After refusing the Langar, we had to sleep empty stomach that day…. now I leave the incident to your own judgement, without giving my opinion.

There are 3 ways to the temple of Naina Devi… one is that we turn towards Manali from Kiratpur Sahib and before Swarghat we turn left and reach Naina Devi. Another is from Nangal via Bhakhra dam… but the route from Anandpur Sahib is the most beautiful with Canals, forests and good roads 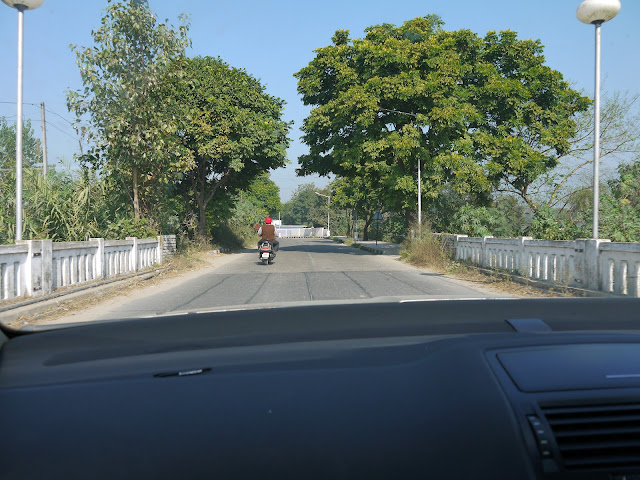 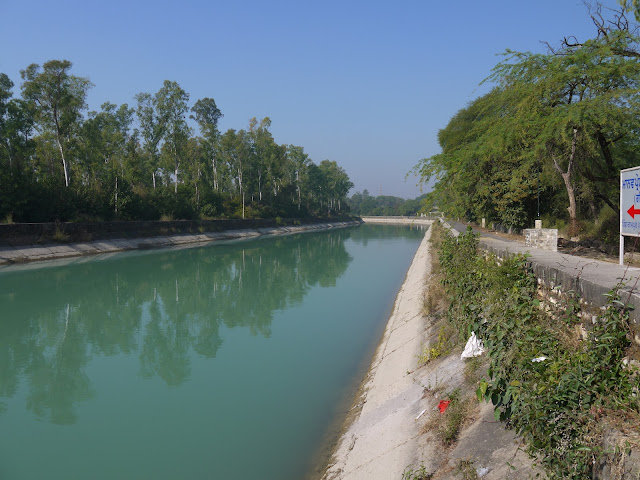 Canal on way to Naina Devi

Naina Devi temple is on the highest peak in the area and is visible from Kiratpur Sahib to Nangal.  The more we climb the clearer becomes the temple. 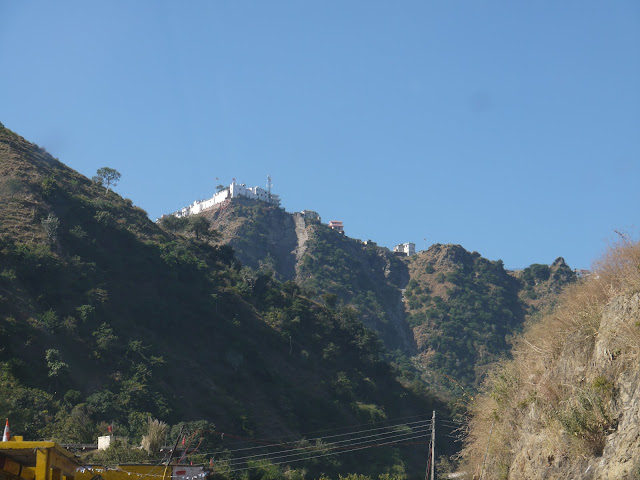 Since we were in no mood to climb the 1 km odd ascent, we reached the base of the rope-way.  Last time there were lot of shops at the base, but this time most of the shops were closed, and the rope way empty to our surprise. 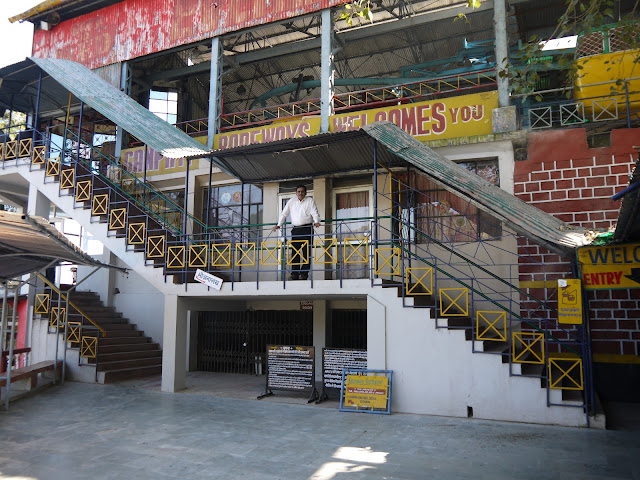 Base of Rope way to Naina Devi

We purchased the tickets which were Rs 100 per person plus 10% entertainment tax.  I asked the counter man as to what is meaning of entertainment tax ? We are going to a temple and there is no entertainment in this.  Why are you turning our devotion to entertainment ? He said – ask your government, they have asked us to levy this tax.  Chalo we boarded the third class fiber glass cabin and started our journey.  The vistas around were beautiful. We could see the vast Gobind Sagar Lake of Bhakra Dam. 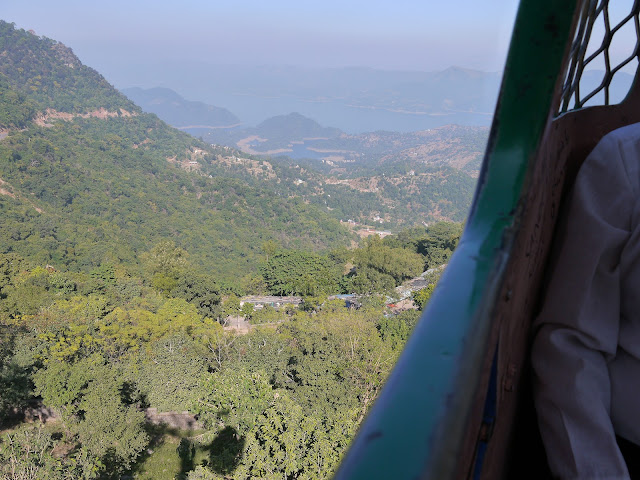 When we reached up, we found the reason of empty ropeway and closed shops.  Now cars can reach upto temple and hence people were coming upto temple on taxis, instead of standing in que for the rope way.  We bade farewell to the rope way and started our journey towards Temple.

I had come here in 1977, for the first time and the temple was lesser known then with mainly local devotees.  After so many years, after land-slides and stampede killing many, the temple still fascinated me.  It is on top of a hill and we can see all around from the temple.  Almost full view of Lake, Anandpur Sahib, Nangal …all can be seen clearly from the temple. 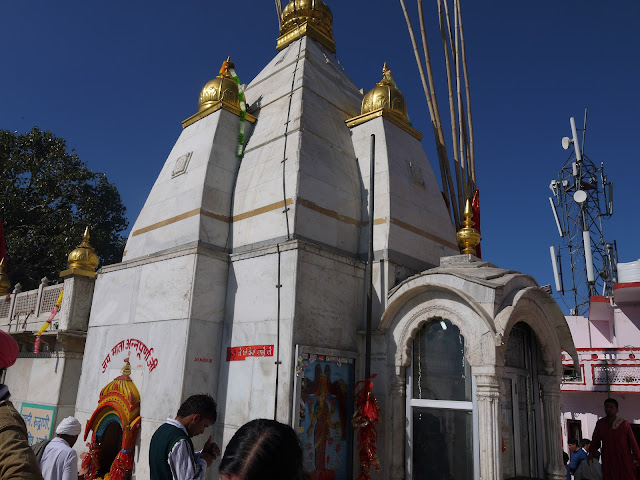 The story is well known… when Sati killed herself in the yagna fire of her father, for the sake of respect of Lord Shiva. he carried her dead body all around earth.  Vishnu cut the body in 108 pieces, to relieve Shiva of his distress.  The pieces fell on the ground and a Shakti Peetha was formed. 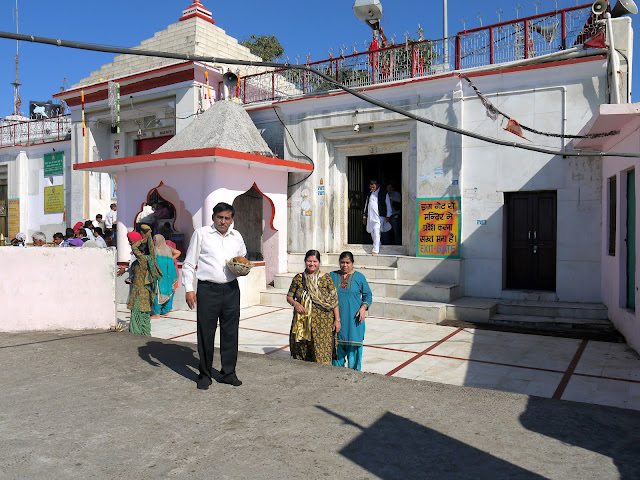 There are records available for 52 shakti peethas spread over Tibet,Nepal, Bhutan, India, Pakistan and Sri Lanka.  Trinkomalee in sri lanka and Hingulaj Bhavani in Pakistan is still visited by many shaktas. The rest of the 56 shakti peethas are around the world and no record is available…But I feel where ever in the world God is worshipped and a grand temple/mosque/church is established, must be actually a shakti peetha. 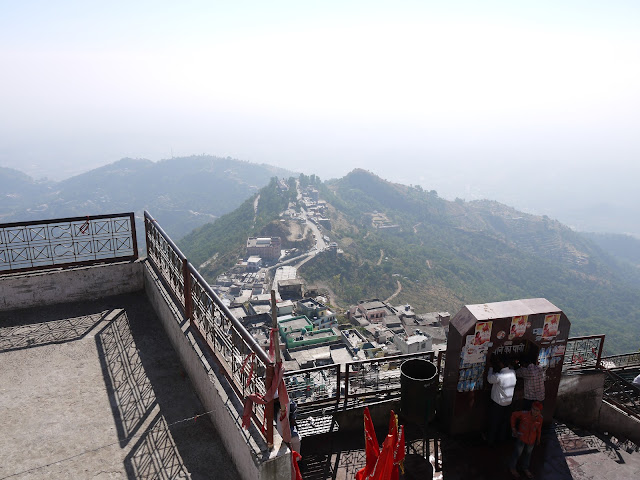 View of bus stop from temple. This is base for trek to temple

Naina Devi is the Shakti peetha where Sati’s eyes fell.  In Nainital also there is Naina Devi temple besides the lake.  They say one eye fell in Himachal and the other fell in Nainital.  Ki faraq painda e ??  If we have devotion we find shakti peetha anywhere.  Well the temple was in chaos, full of gandagi, indiscipline crowd, confused policemen and pujaris, as in most of our temples.  We had  darshan in one hour… (This was the first time I saw que in temple in my 5 visits).

We left the temple and started towards Nangal via Bhakra Dam.  The policemen there searched the car and asked

policeman insisted that I shutoff the camera and keep it in suitcases, so that we do not snap photos of Bhakra (the fotos which are easily available on net)

Proof ?  the photo of Bhakra dam put on net by NIC, the Government agency 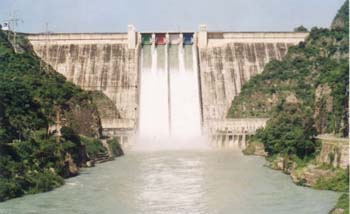 Finally we reached our destination of the day Jwalamukhi…Jai Jwala Ji ki. 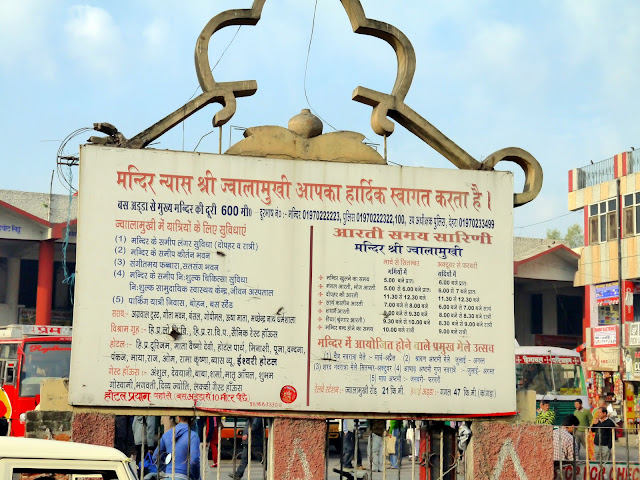