Almost 2 years in Iceland and I had become home-sick.  India was calling and on 7th Nov I finally flew from Iceland for my journey to India.  We reached Keflavik airport in Iceland well in time, got the boarding passes and enjoyed free meals and drinks in the lounge, waiting for the plane.  Lounge of Iceland Air is small but tastefully decorated. 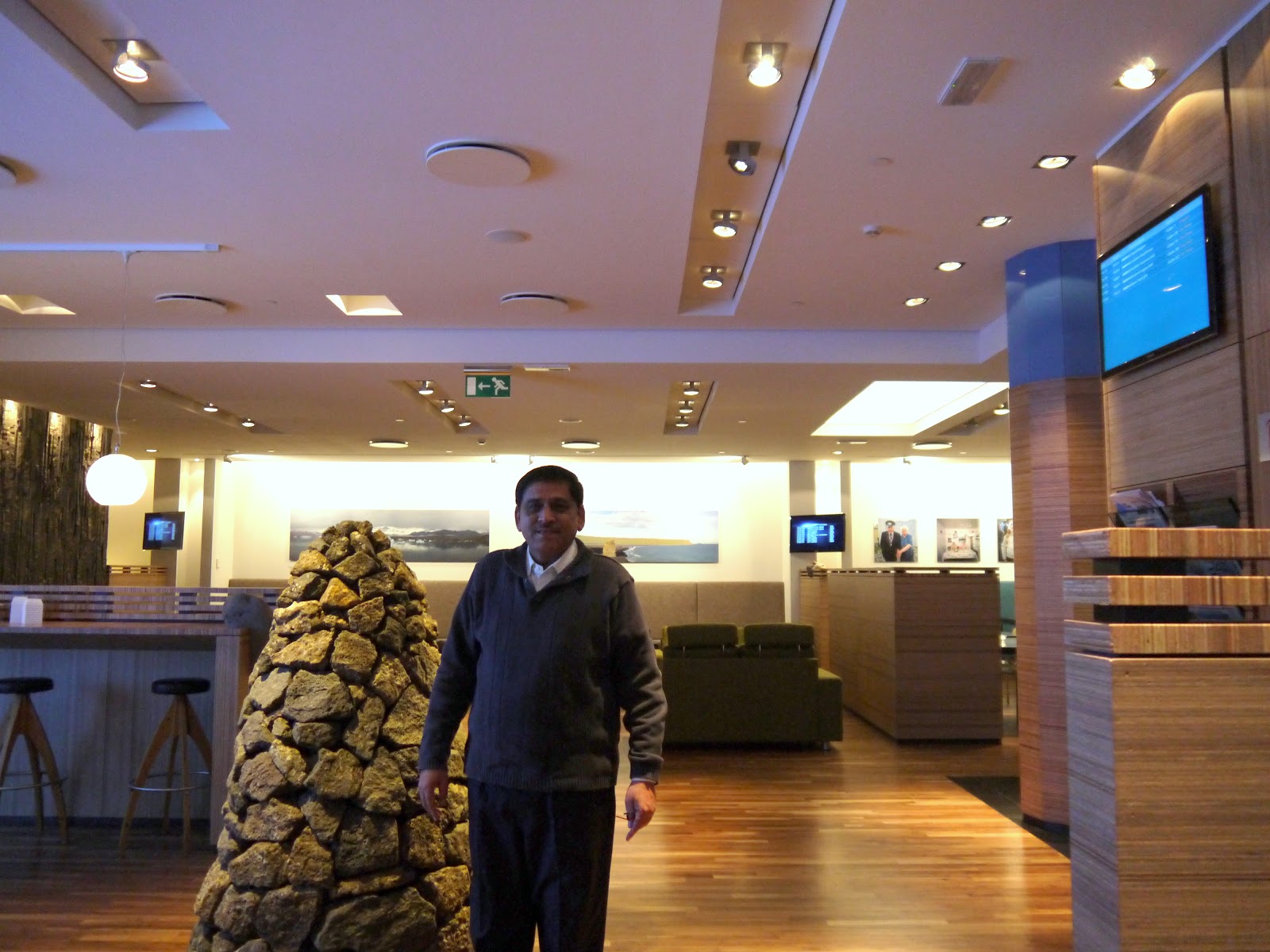 In the lounge of Iceland air

The flight left on time and by 1930 we were hovering above London Heathrow.  London looked beautiful from above…sparkling with lights. 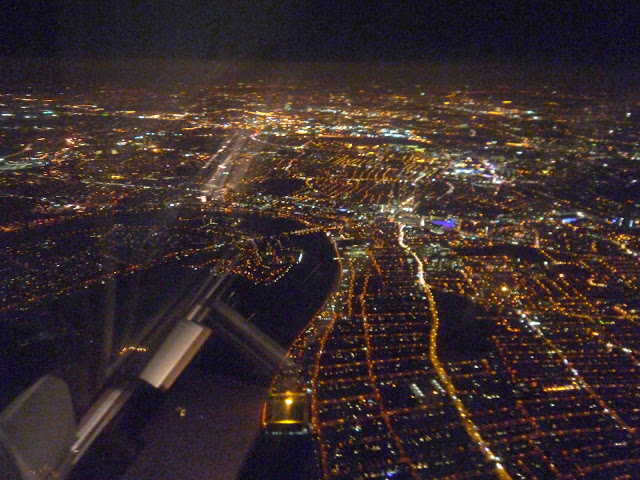 Finally we touched heathrow passing the lousy Indian immigration officer we came out refreshed.  Shan had come to take us home.  He had hired a big car knowing how much baggage is carried by Indians, but he failed miserably, as we had total 5 suitcases which his hired Renault could not carry.  So 2 pieces were kept in lap and one kept at the leg space and shan’s wife had to sit like a baby keeping her feet in the lap of mom.

In 1 and half hour we reached Southampton.  I was excited as I was going to see a historic city from where Titanic sailed in April, 1912… The scenes of movie Titanic were coming before my eyes.. I wished to remember the scenes of crash and people drowning, but some unwanted scenes (like painting :) ) kept coming, which I forcibly removed.

Southampton is a small city…very quiet, beautiful and attractive.  There is nothing much to see in Southampton, but the Titanic Museum and remains of old Southampton fort.  Next day we started our exploration of Southampton.  We went to the market and saw the gate of Southampton Fort.  In WWII, SH was completely destroyed and it was re-built.  The pier from which Titanic sailed, was also destroyed and there stands the new port. 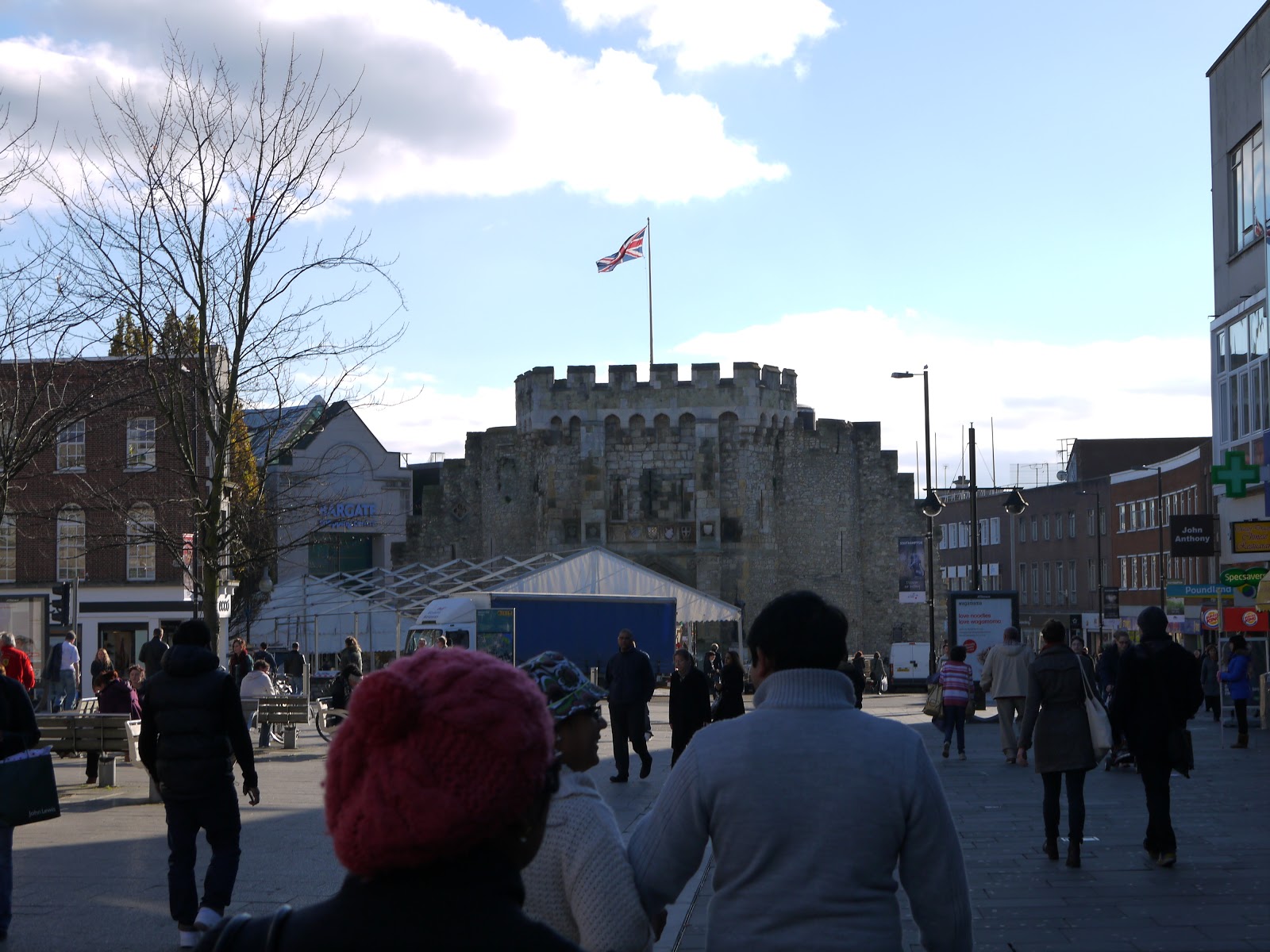 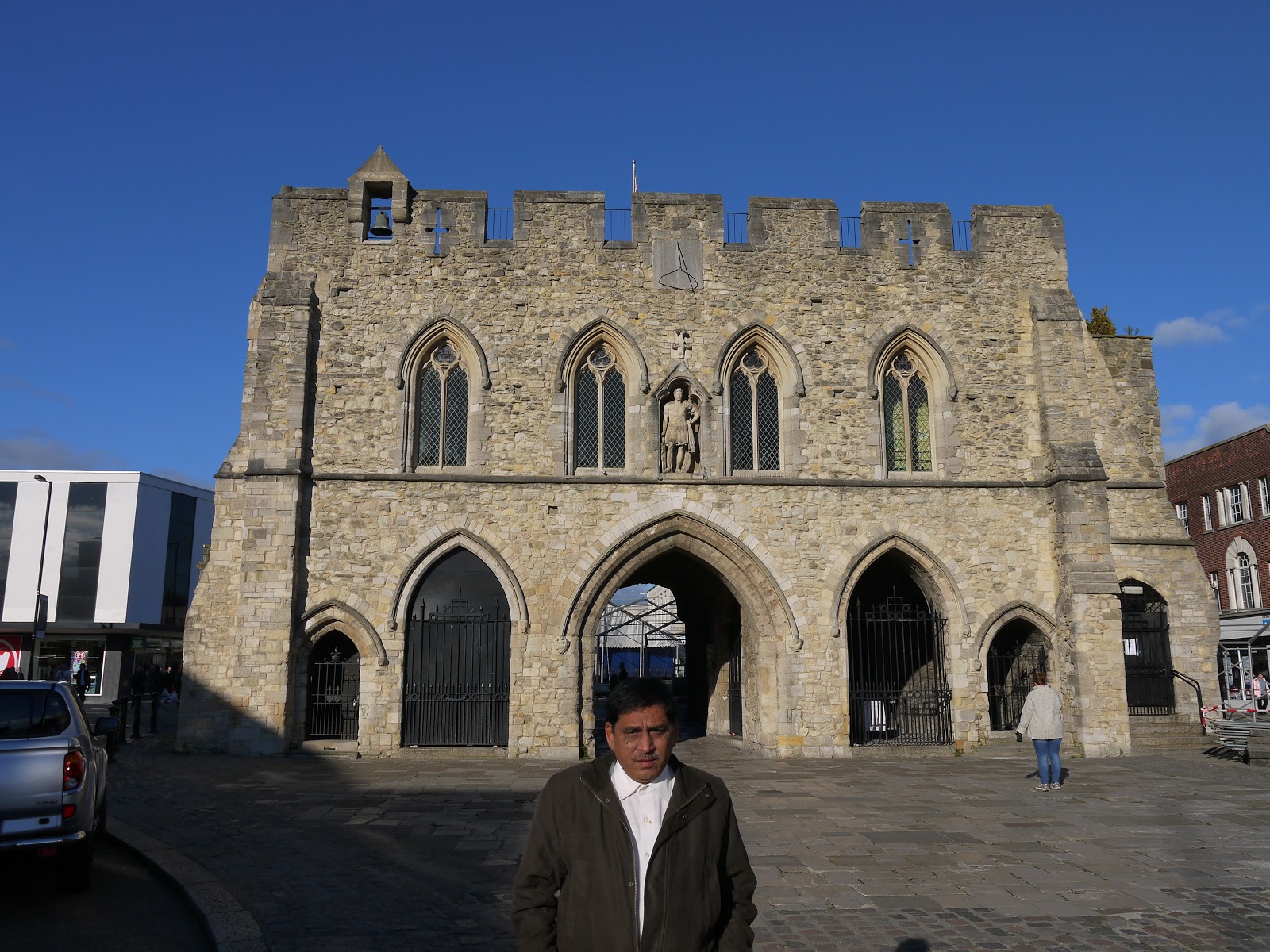 There was an Indian Restaurant near fort.  Restaurant was run by a Karnatic couple and was famous for south Indian dishes… yummmm  so many years I have not tasted Dosa so we sat in the Restaurants and had the dosa… not bad 10000 KM from dosa towns, it was a little costly but tasty. 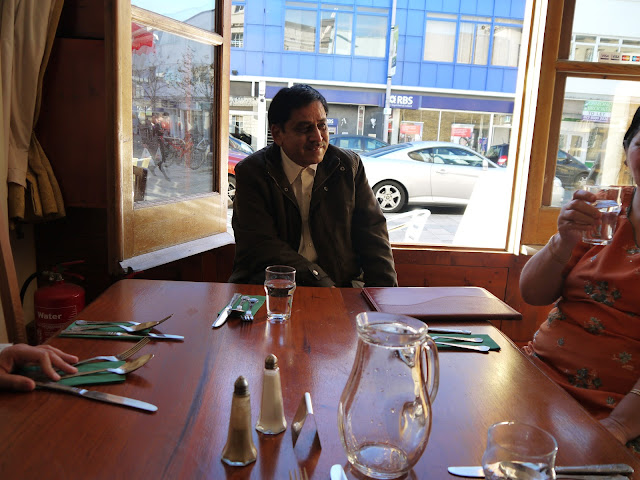 After filling bellies we went on tour of Southampton on foot, since it is a very small city it was possible to see most of the things on foot.  The steam Rails museum, which I had planned to see was closed for maintenance and I was sad to miss it, since I have loved locomotives since my childhood. We passed through the main city council, Southampton art museum and Sea-city /Titanic museum.  The museum has all the facts about Titanic, the stopped watch of a sailor and some items recovered from the sea-bed.   Englishmen are good business people and they have cunningly made a business of Titanic story and are selling beer  mugs, souvenirs etc in the name of the  doomed vessel. 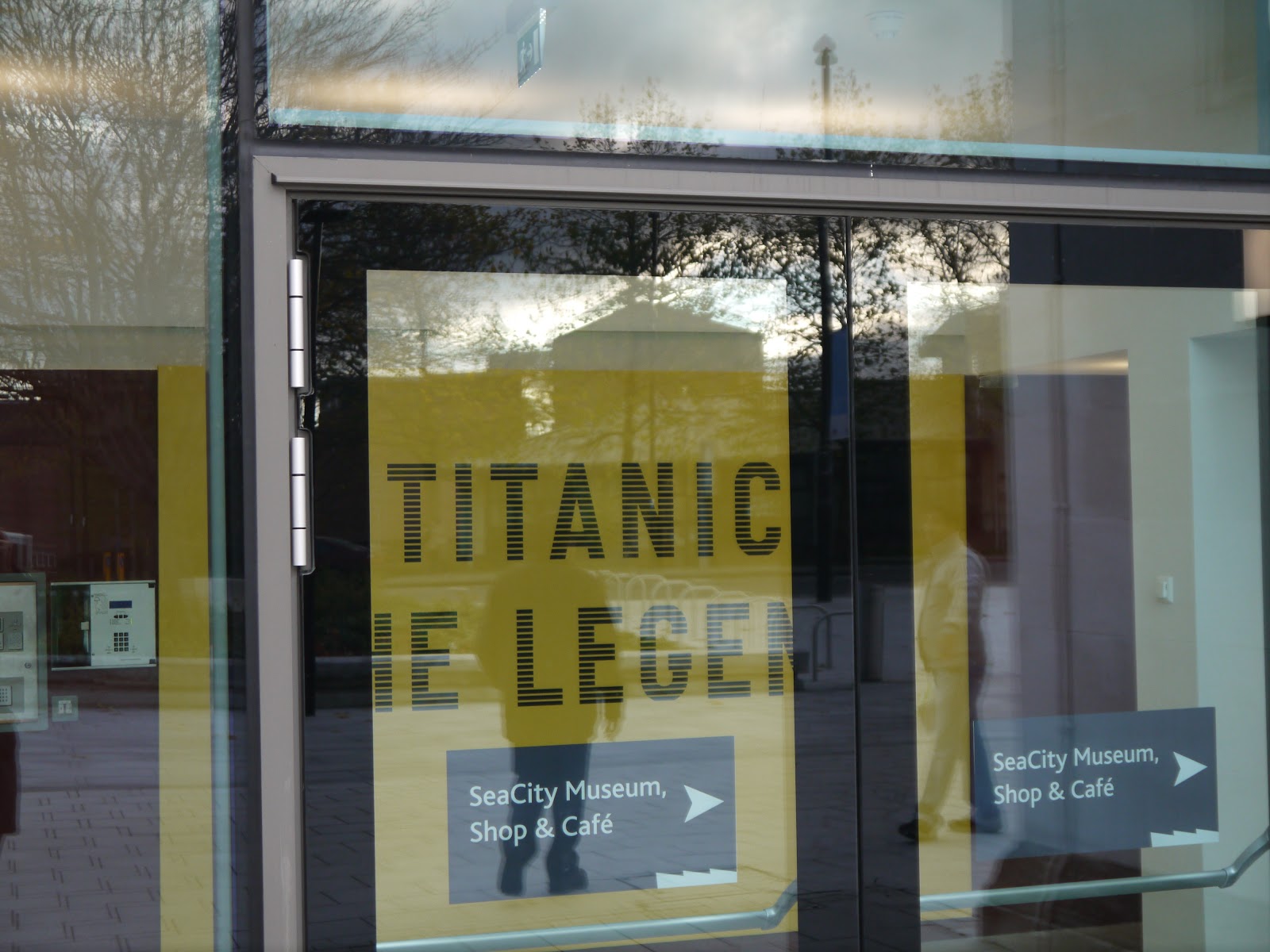 After having a round of the city and seeing various places and malls, we finally decided to go to Stone-henge which is some 45 minutes drive from Southampton. 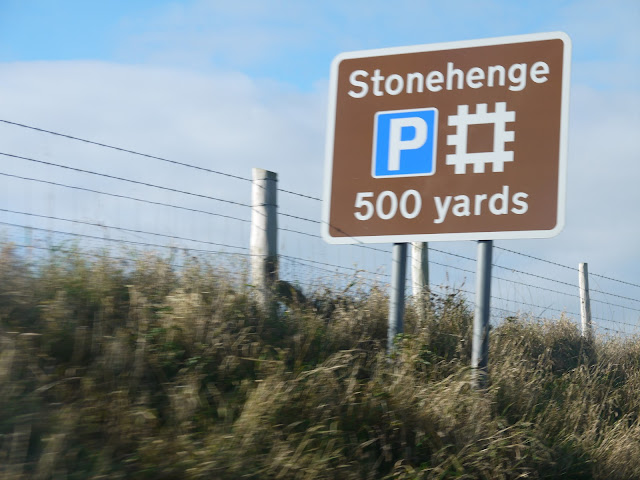 Stonehenge is an ancient site supposed to be built about 5000 years ago.  It is European version of pyramids, only smaller in size, but equally fascinating.  Original stonehenge was a group of two circles made by stones. 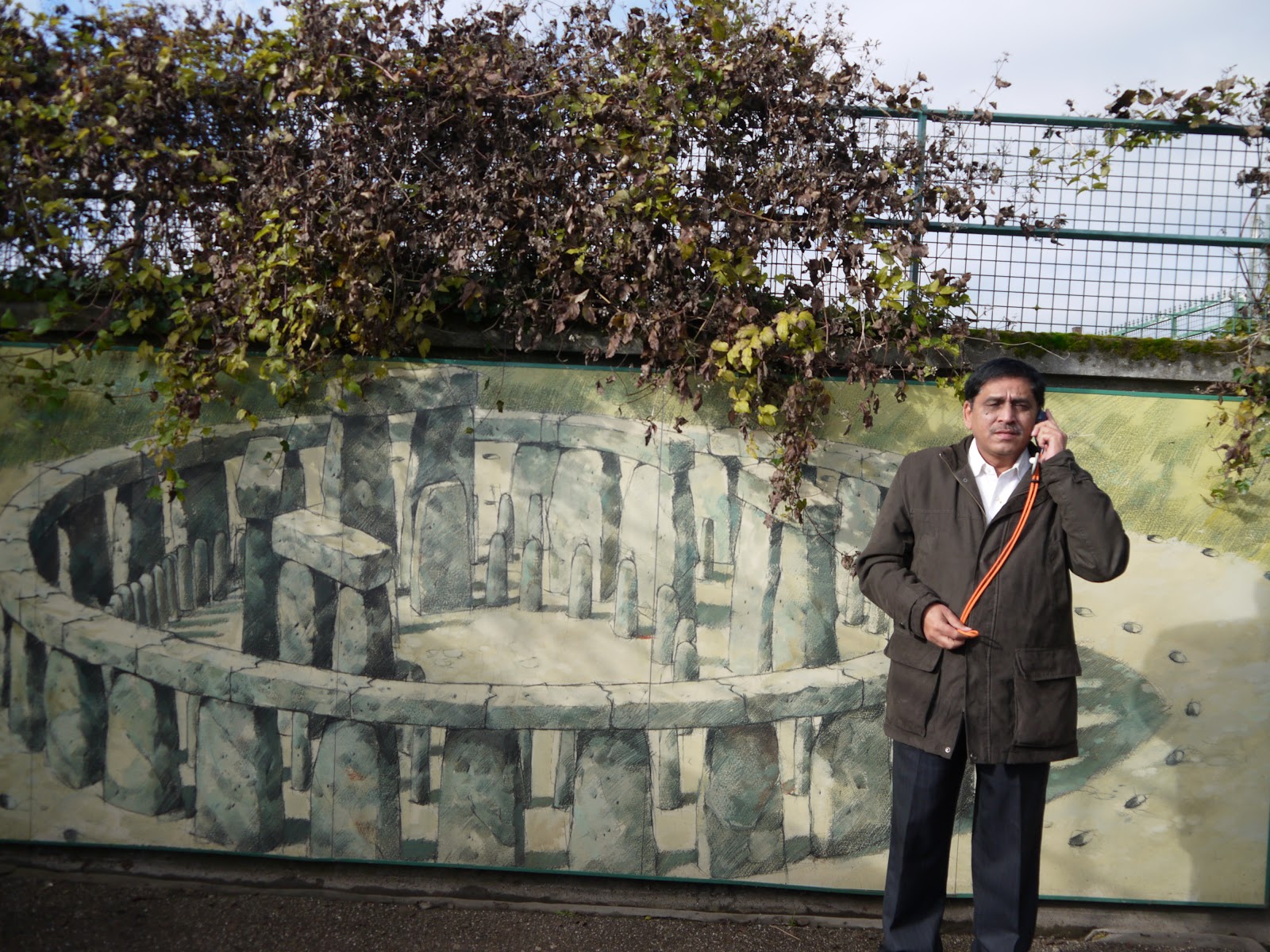 Foto of the original stonehenge

But due to time and natural forces most of the stones have been displaced and what is left now is a semi circle of stones.  It is still a mystery as to how, 5000 years ago they lifted those heavy stones without any machinery.  Some people believed Devil erected those stones, some think same technique of sloped platforms were used to lift those stones, as was done for Pyramids. 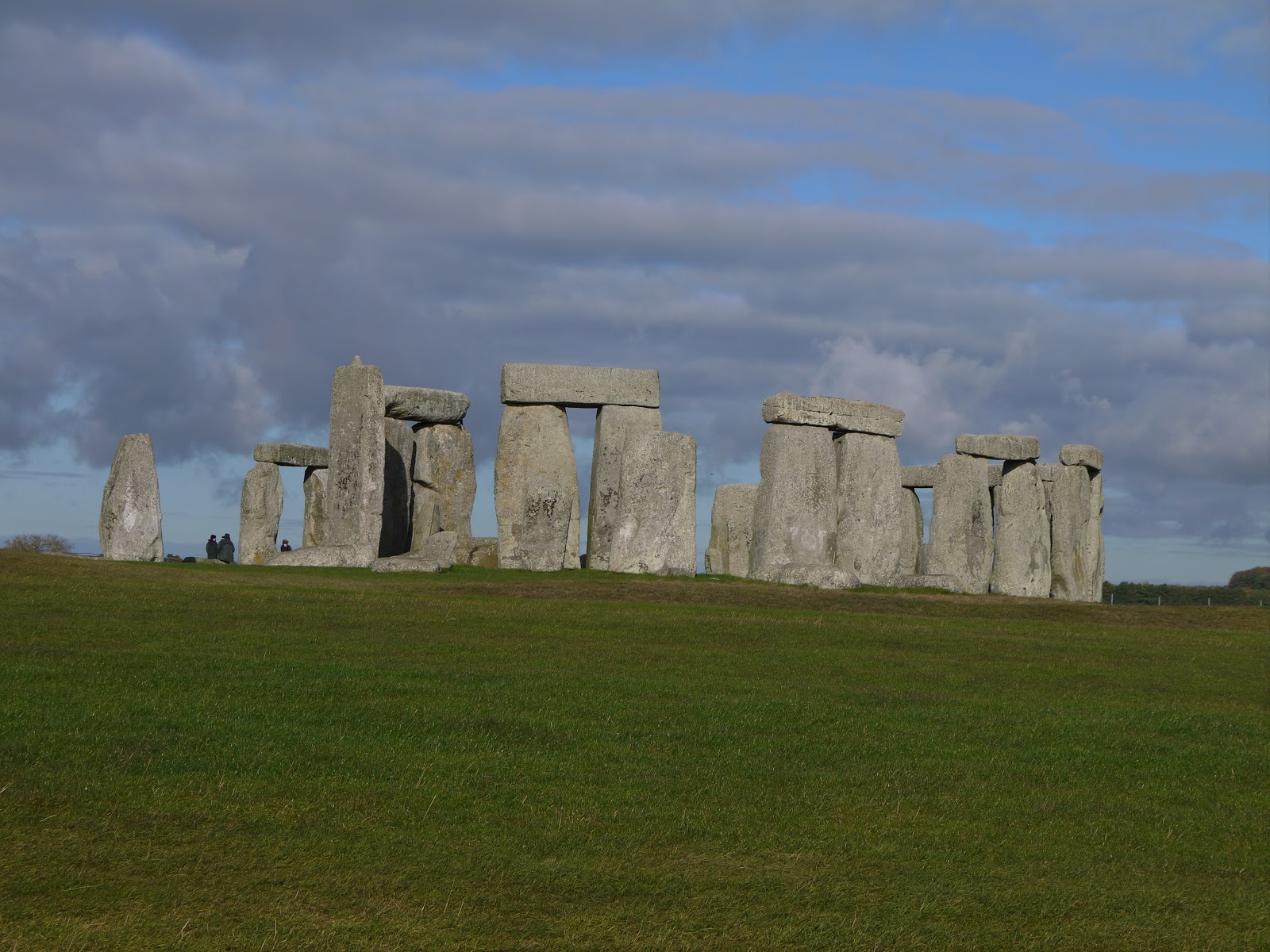 Stonehenge as it stands now

The stonehenge is also thought to be the burial ground of some ancient religions like pagans.  This thought brought shivers in my spine as I remembered the horror film “The Pet Sematry”, where the hero buries his dead son in an ancient cemetary and then the son comes back alive…but as a ghost with human body.  Another thought is that old pagan religions used this ground for some black magic rituals.
We reached the parking, purchased tickets and entered this wonderful monument.  We were given head phone which would tell the story of the place we are near to.  There were many visitors, as the day was sunny and warm. 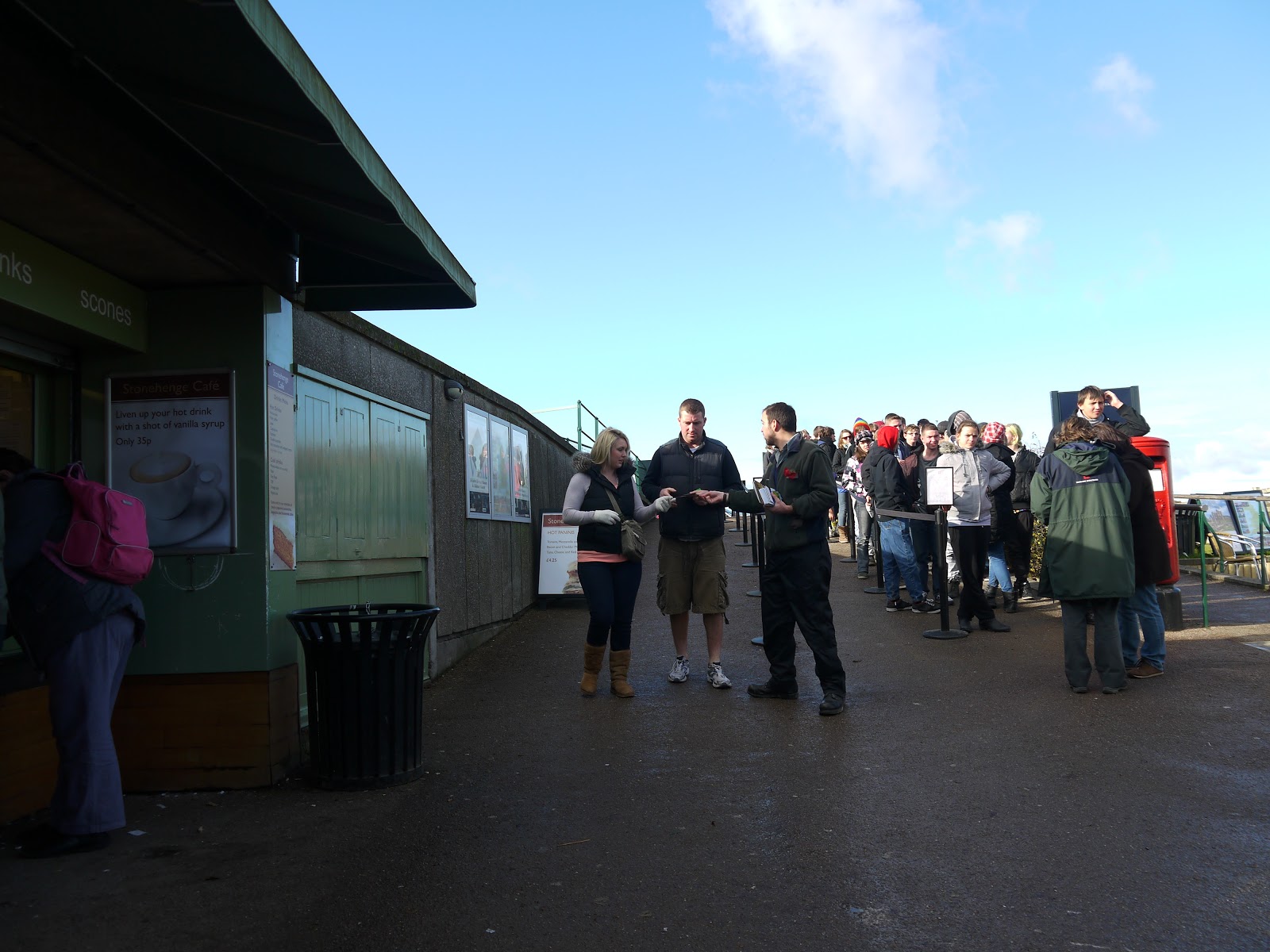 que of visitors to Stonehenge

heeling stone is another big stone near stonehenge, which is said to be thrown by Devil (LOL) 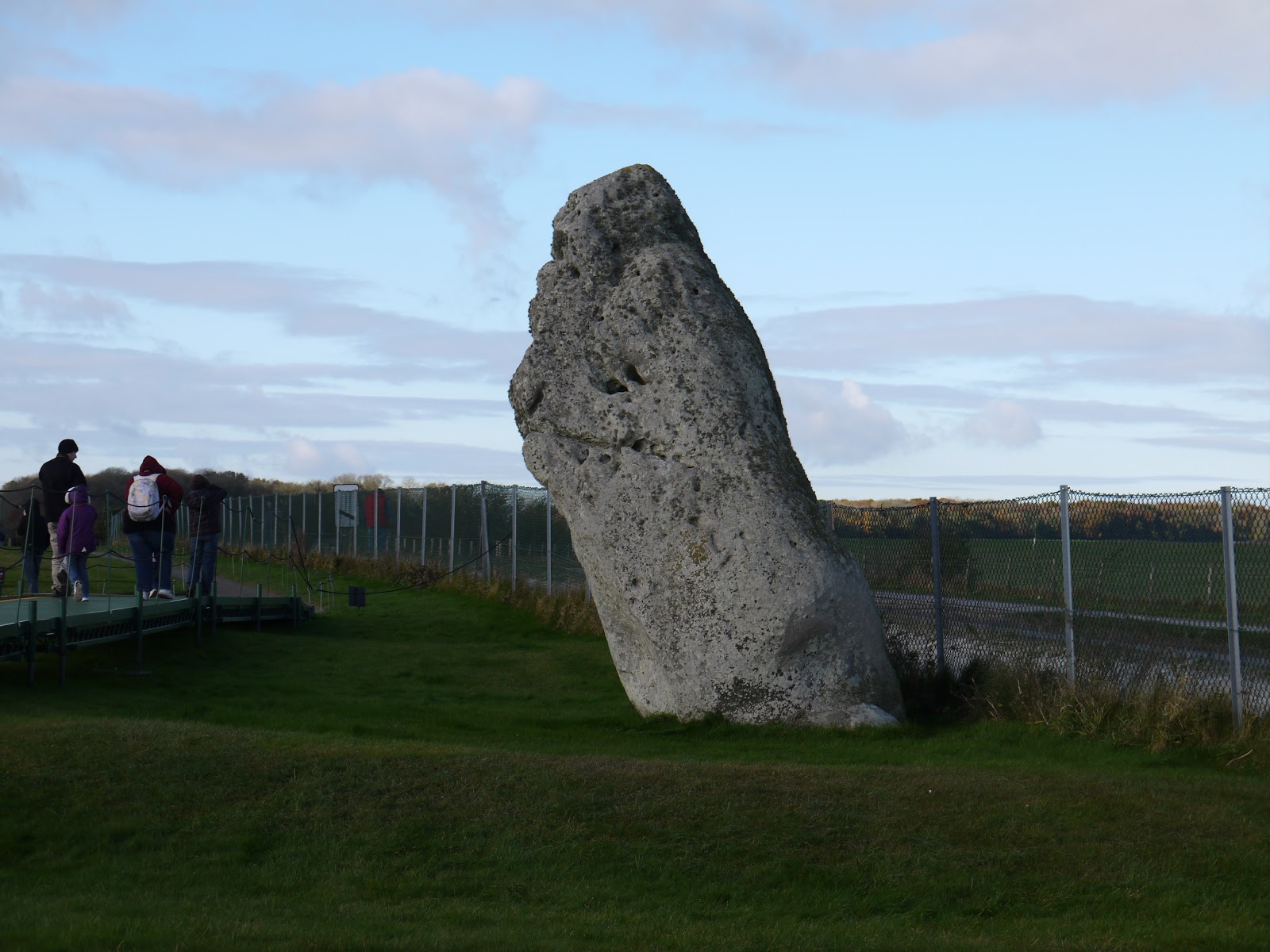 The breathtaking prehistoric monument located near Salisbury in the English county of Wiltshire stands as strong today as it did 3500 years ago. Documented as one of the most famous places in the world to visit, Stonehenge was built in three phases that consisting of over 30 million hours of labor.

Some think it is a solar calendar that predicted the sunrise, sunset, eclipse, moonsets and moonrise while others reckon it as a place for worship. The reasoning for Stonehenge remains a mystery. 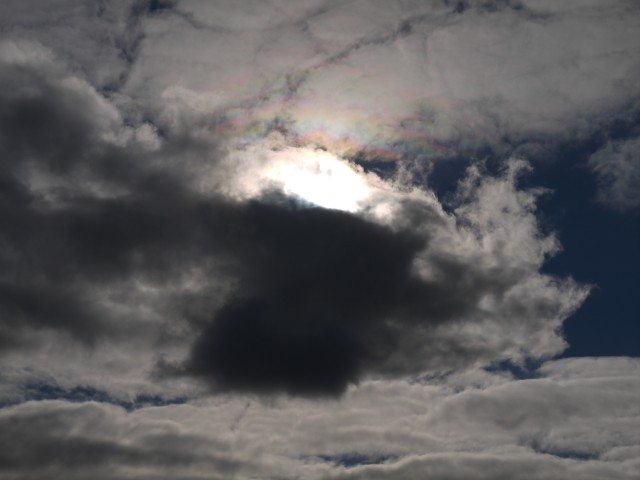 Sun and Rainbow over Stonehenge

Some authors state the supernatural must have played a part in the construction of Stonehenge reasoning the stones were too heavy making impossible for anyone to move and carry therefore making Stonehenge a much bigger mystery.

Whatever the reason, the circular landmark of large standing stones is a wonder to everyone as Stonehenge dates back as far as 3100 B.C. the estimated built time.

Although total construction was not completed at that time, Stonehenge was built in three phases with a time span of 1500 years. There is also evidence at the construction site that it could actually date back as far as 6500 years.

Throughout history many archaeologists and antiquarians have visited Stonehenge to try and satisfy this monumental mystery. Whether this mystery will ever be solved, Stonehenge draws visitors from all over the world. It is a place to visit that will satisfy your own curiosity. If you’d like to come and pray or meditate or just take in it’s architectural beauty, Stonehenge is a place you will not want to miss. (Thanks to stonehenge.org)

It is quite possible this stone was used for healing purposes by ancient witches, and it lost its name and became Heeling stone instead.

After  enjoying this wonderful site, we returned home tired.   Next was the programme to see the Portsmouth which was also very near Southampton. 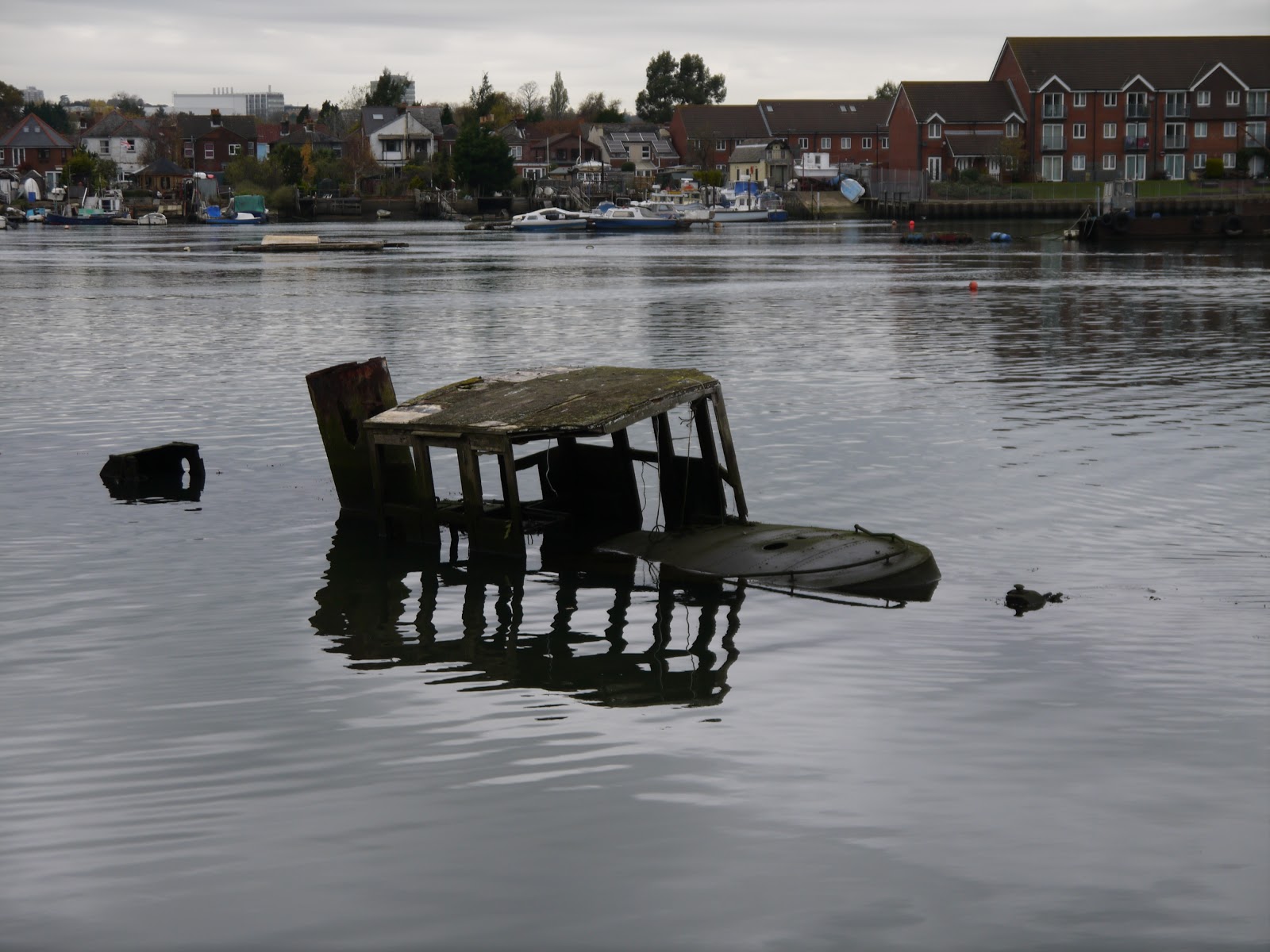 A view from Shan’s flat in Southampton

21.10.2010 The distance between Srisailam and Tirupati is approx 400 KM and it takes around 12 hours by bus. From Srisailam to Tirupati there…