My Mahayatra – Iceland to Himachal Pradesh

Yesterday after a tiring trip of Southampton and Stonehenge, we were fresh the next morning and this time our destination was Portsmouth a beautiful city between London and Southampton. We started around 10 and within one hour we reached Portsmouth. 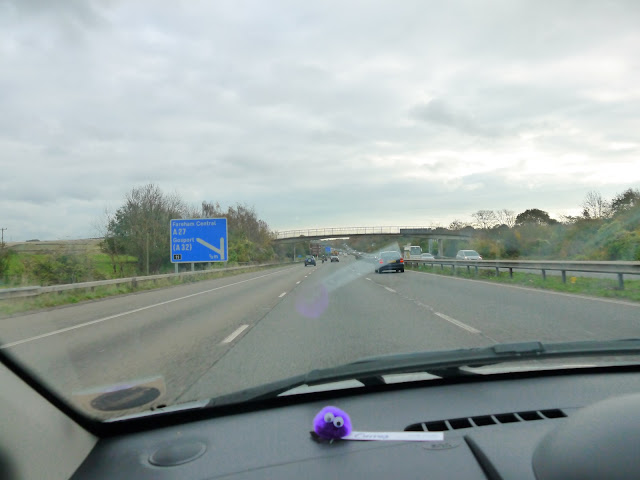 On way to Portsmouth

Portsmouth is a small port city famous for many famous naval ships for example HMS Warrior and HMS victory. It is old dry port and is situated on an Island. 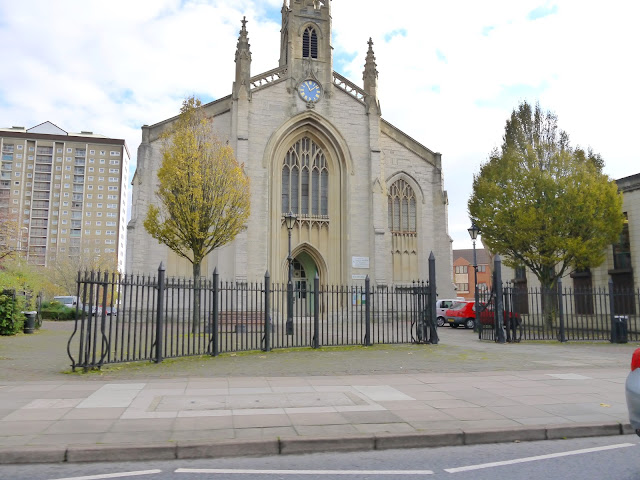 University of Portsmouth is very famous for its specialised courses in marine technology and other disciplines. 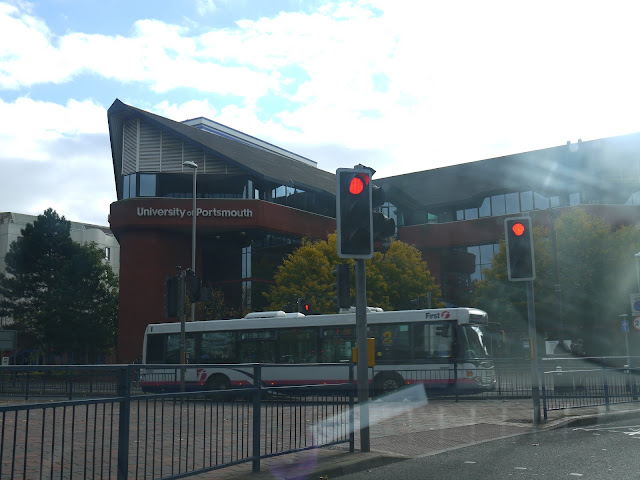 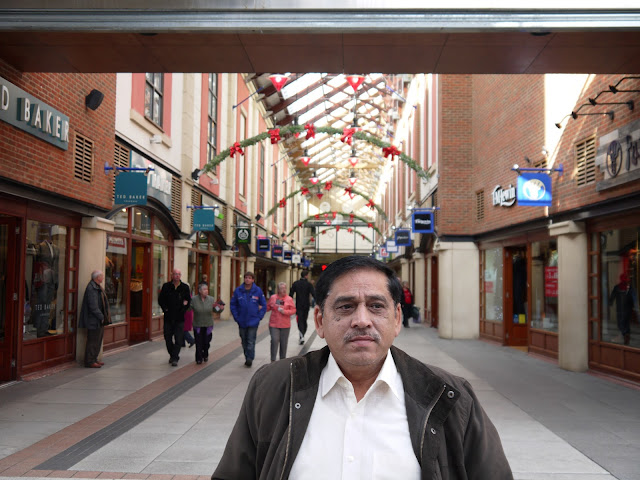 In the Mall of Portsmouth

Some facts about Spinnaker Tower

The Tower has been a huge success and has received over 2 million visitors since opening.
The high speed internal lift travels at 4 metres per second, taking you to the View Decks in just 30 seconds.
The concrete used to build the Tower would fill five-and-a-half Olympic-sized swimming pools.
The Tower is founded on 84 piles, the longest of which runs 50m into the ground – the equivalent of Nelson’s Column.
The total weight of the Tower exceeds 30,000 tonnes.
The 27m spire weighs 14 tonnes and was carefully lifted into place by crane.
1200 tonnes of structural steel used to form the Tower’s distinctive bows is the equivalent weight of 12 blue whales.
115 metres up and in high winds, the Tower can flex approximately 150mm.
There are 570 steps from the base up to View Deck 3, The Crow’s Nest. 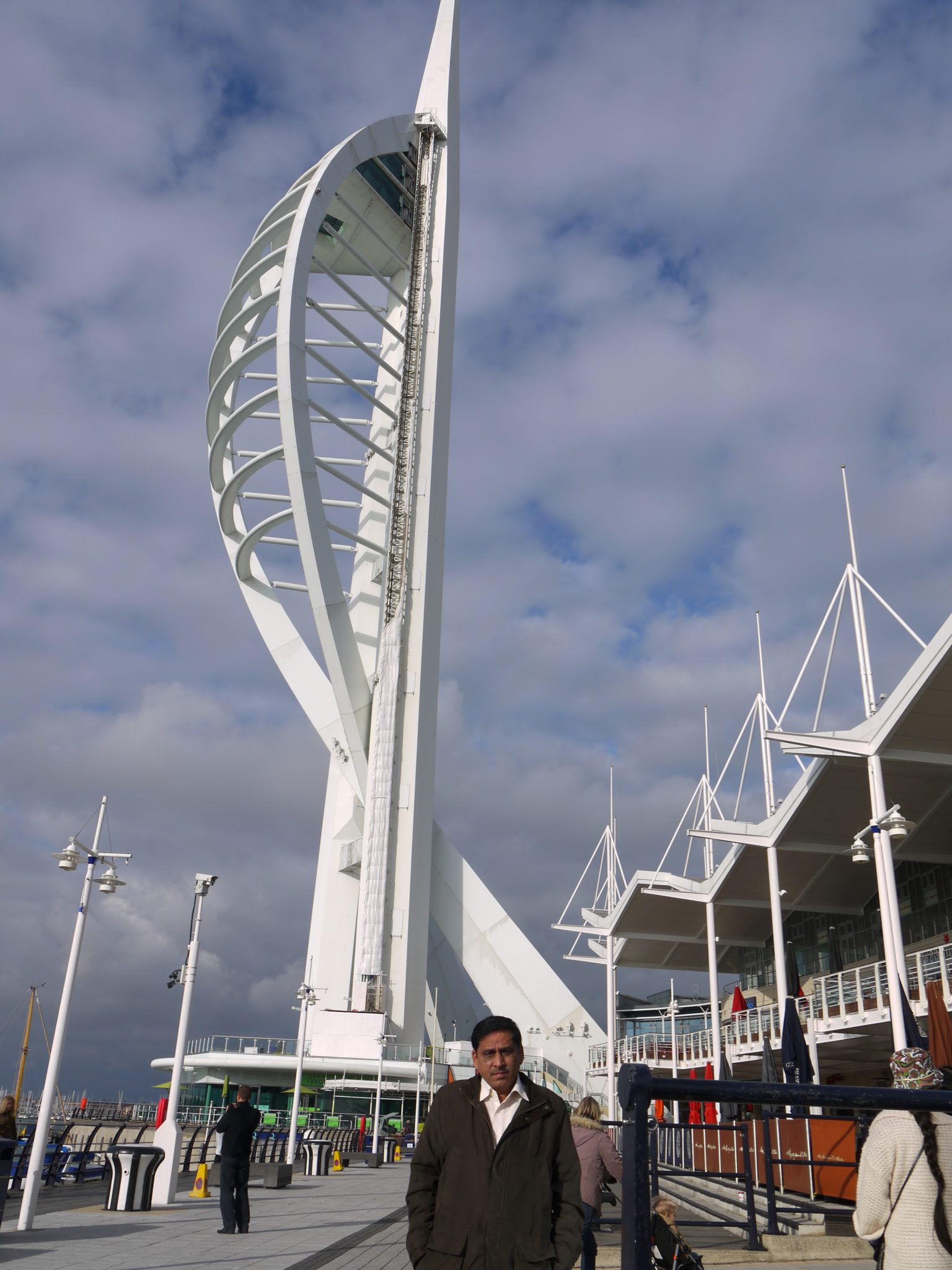 The deck near Spinnaker Tower is used to ferry visitor to Wight’s Island, a beautiful tourist island nearby. 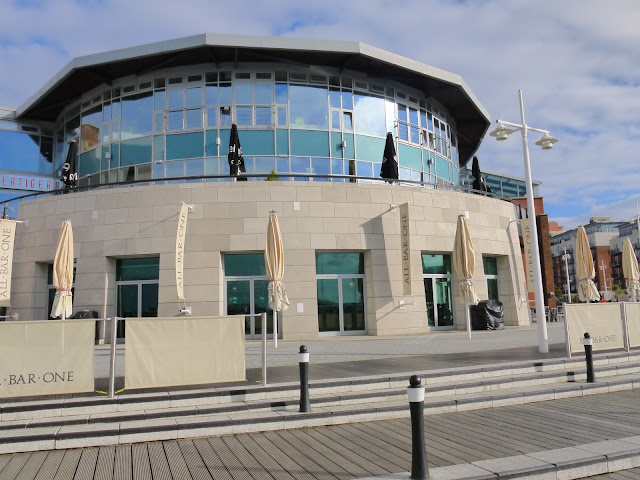 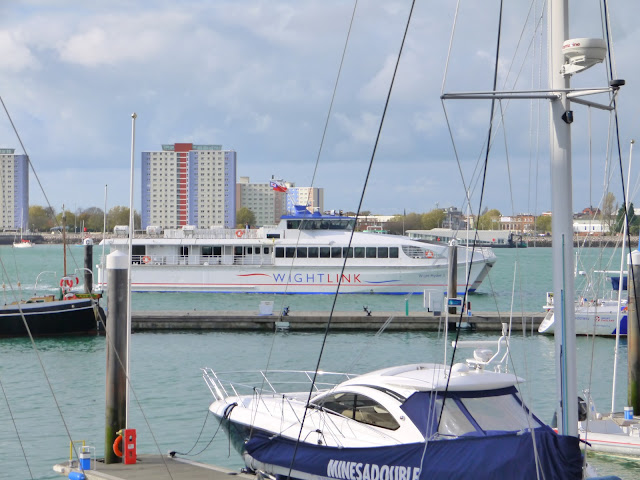 Ferry going to Isle of Wight 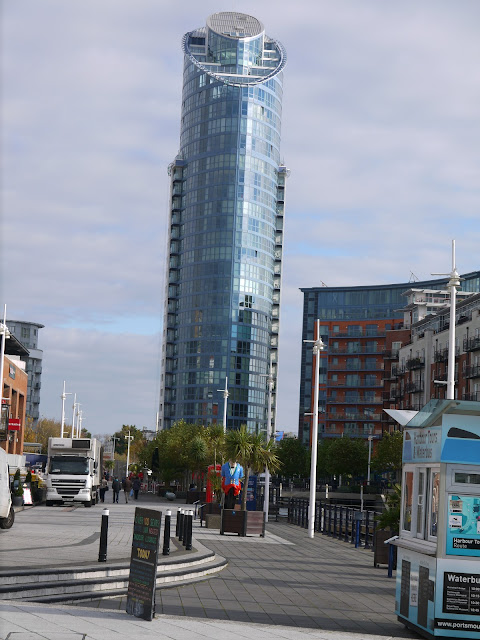 We were having great time in Portsmouth. There was a mini replica of the port of Portsmouth with miniature Light house and port. 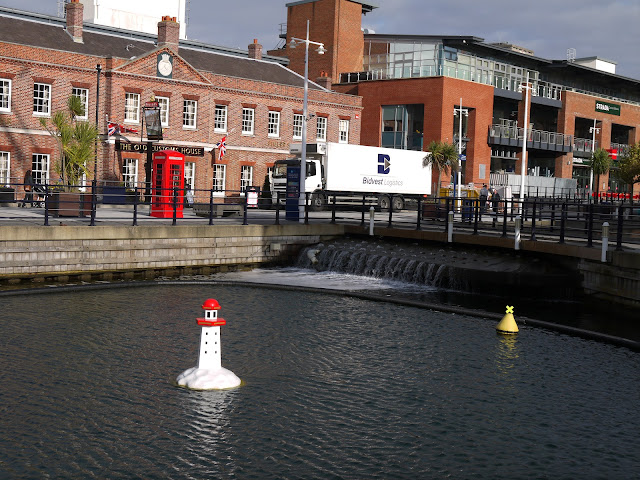 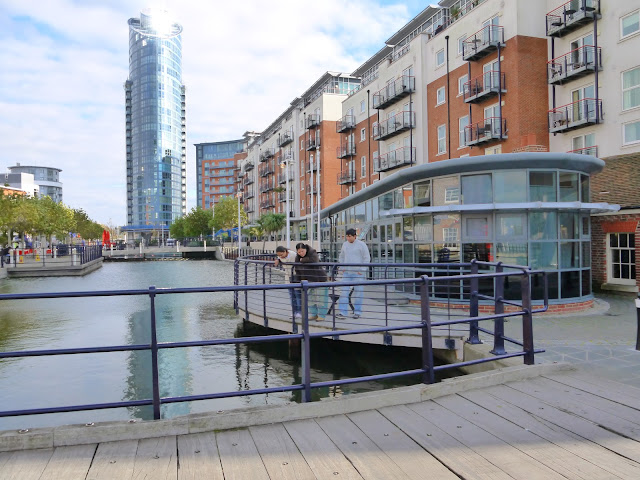 a view of dock

Although Christmas was a month away, the sale for christmas had started and there were special sales by farmers selling honey, biscuits and cookies, near the port. 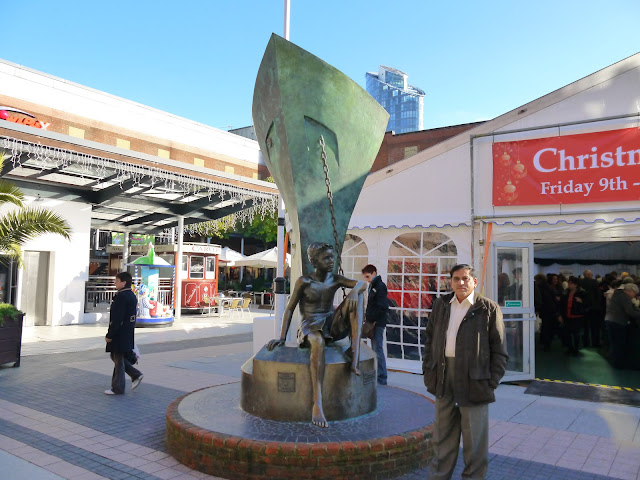 After having a heartful wanderings around the city center we started towards the aquarium, another famous spot of Portsmouth. It was outside the city and on the seashore, touching the waters of the English Channel.
This place was also very attractive and neat-n-clean. 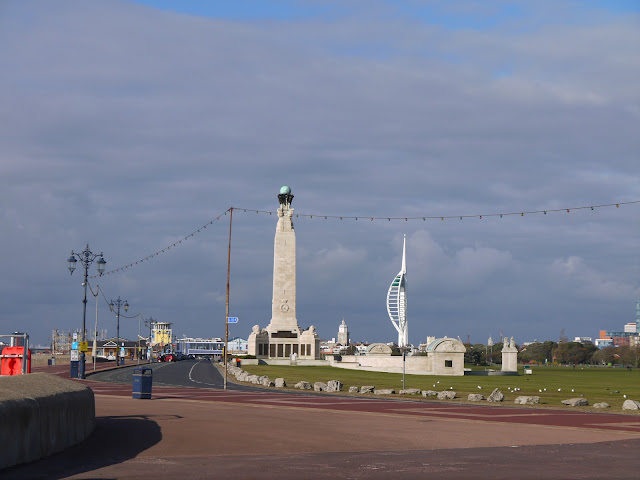 Finally we reached our destination the Bluereef Aquarium. It is man made aquarium built underground and has dozens of species of fishes which are not normally seen by humans. The entry ticket was pounds 9.75 per person and this amount was nothing before the excitement, the information and the knowledge we would gain from the aquarium. 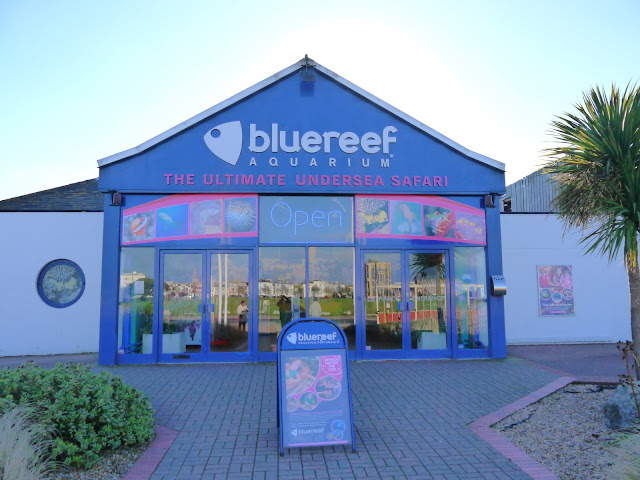 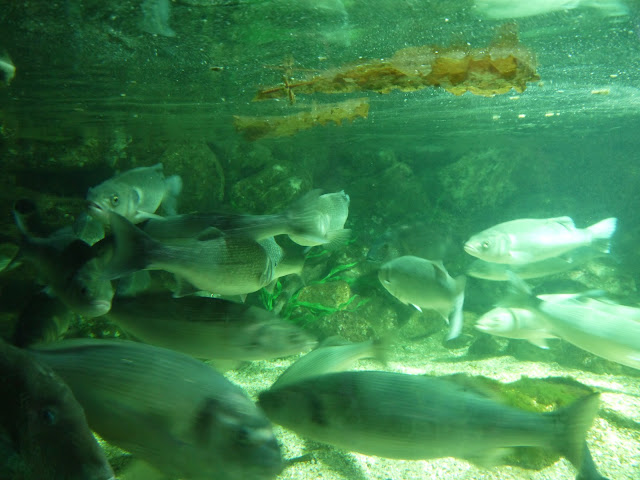 The second pond was of sting-ray firsh. As you can see it has a long sting in the end. The sting is very rough and is filled with poisonous stings. Stingray never uses its tail for attack but only for defense. One in a million, is the count of humans killed by stingrays attack. But our dear Steve Irwin, man Australian TV celebrity, also known as Crocodile hunter was killed by sting ray. 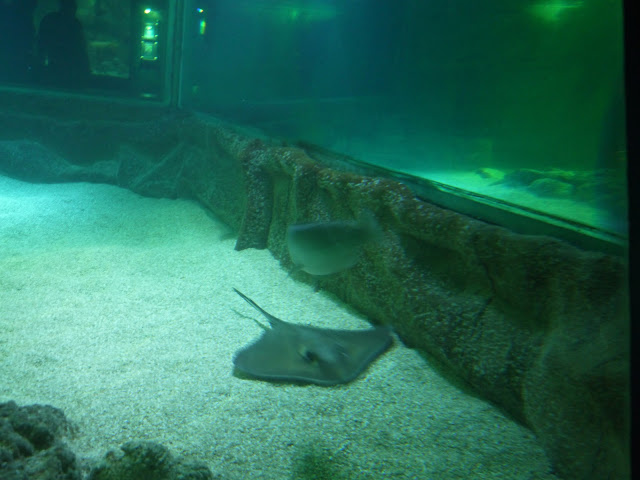 We had glimpses of many fishes like bluespotted angelfish, French angelfish, vermillon sea bass, Piranahs  and other varieties, which we had not even heard of. It seems seeing the fishes in aquarium was better than eating them. 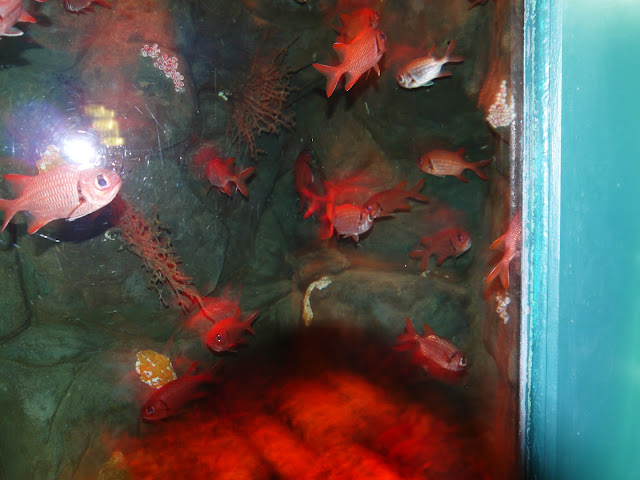 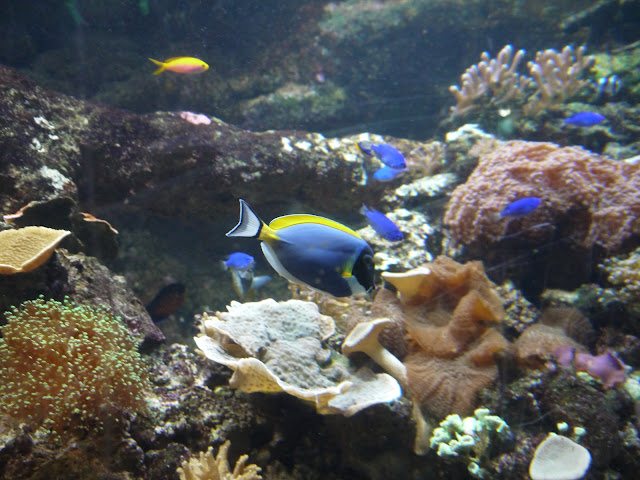 Then we came to the Jellyfishes, some mysterious colorful creatures of the seaworld. Jellyfishes are found all over the sea, from shallow sea-shores to the deepest oceans. They have been developing since 500 million years. They have stings around their tentacles and even touching the Jellyfish can cause the venom to flow into the body. 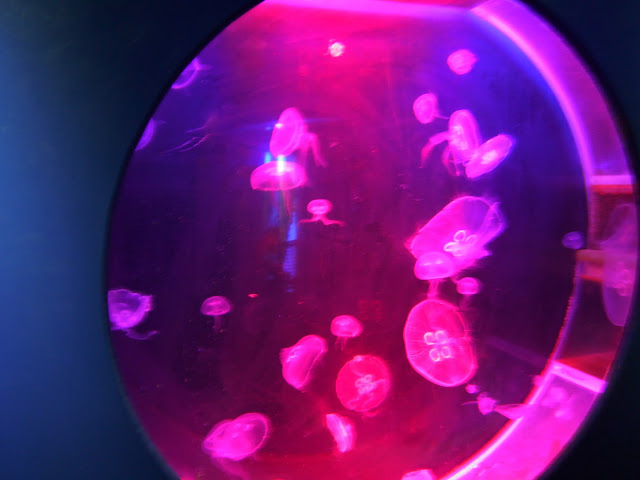 Stings of Jellyfish cause pain, extreme pain and sometimes death too. There are many cases where jellyfish cause injury or death all over the world. 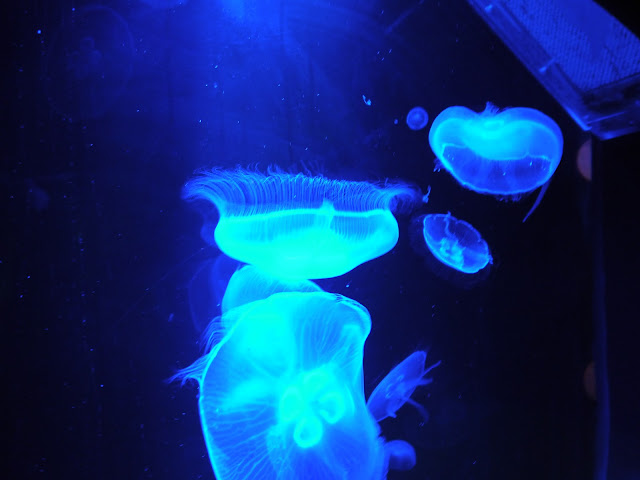 Surprisingly, the toll is equal on both sides. There are some tasty dishes too made from Jellyfishes which are tastefully eaten by human beings In Japan and China they are treated as delicacy…(in China anything crawling, moving or flying are delicacies.LOL) 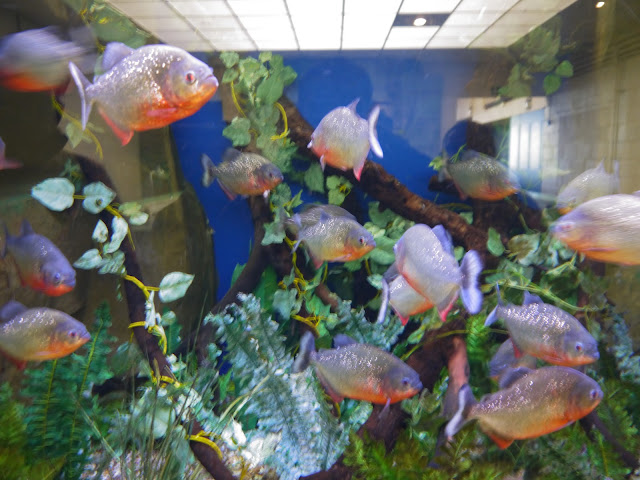 Then we were near the loggerhead sea turtle. Although use of flash was forbidden in the aquarium, someone used the flash on this turtle and when we reached his pond, it was floating stunned as if dead. I thought it has died due to sudden flash of light. I knocked on the glass near its mouth and it suddenly opened eyes and started to swim again. It was so lovely a sight to see it again coming to life. 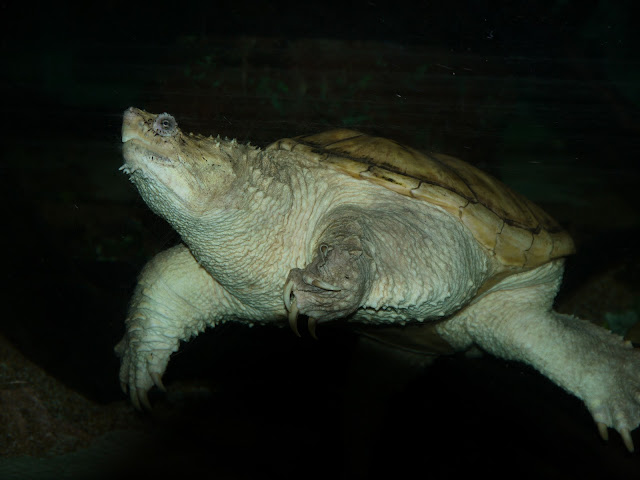 There were many other creatures like colored jhingas which looked like earth insects and the sea horses. Sea horses always fascinated me. they swim upside down, they take care of the babies, because their females lay eggs, handover to the male and vanish in the sea and these poor fathers take care of the babies till they are strong enough to face the brutal oceans. 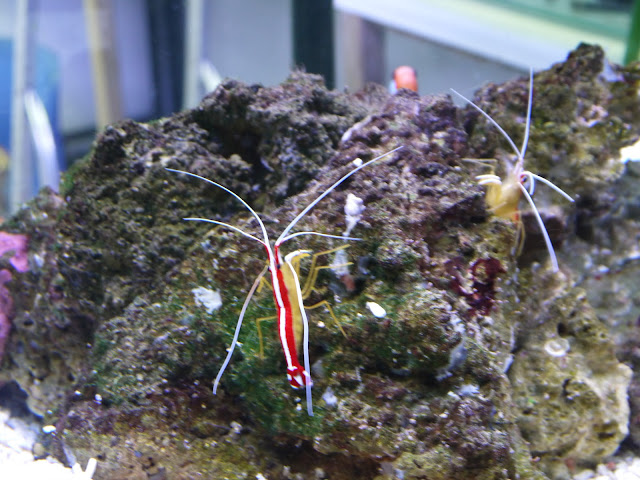 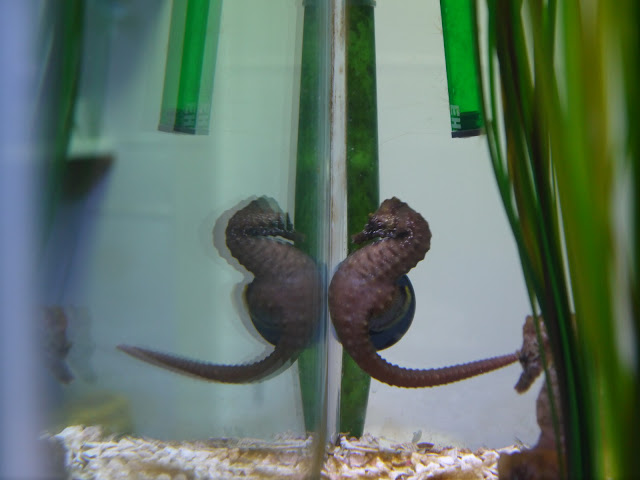 It was great experience to see this aquarium and it removed our fatigue and we were ready for our journey to India,  where I would be taking the grand Himachal circle and would visit some great Himalayan temples and lakes. 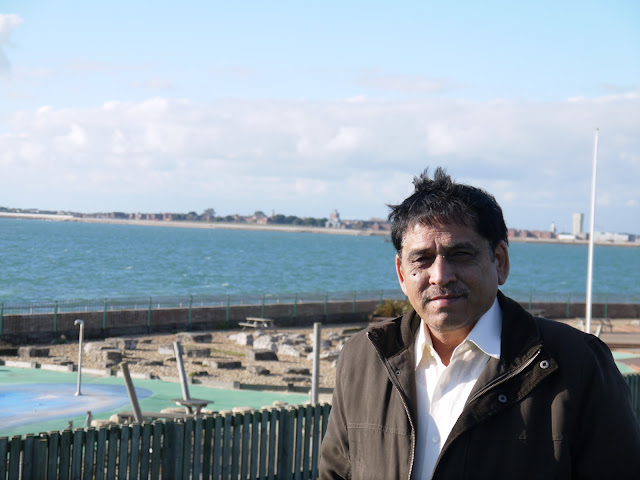 In next part we will start Himalayan cruise and would show you some magnificent temples, ancient monuments, tea gardens and beautiful lakes. 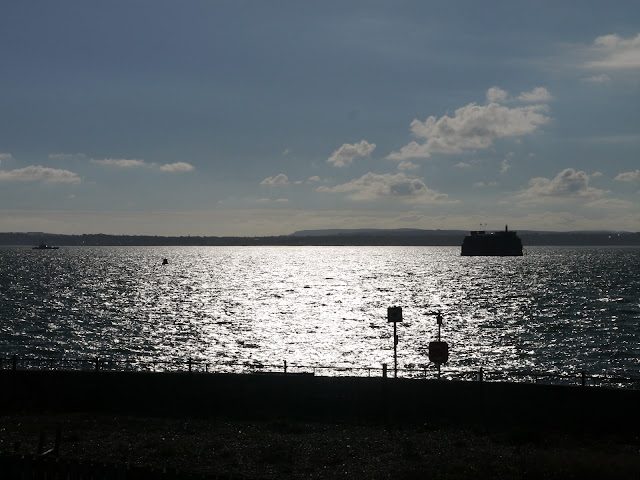 As per belief, in the year 1475, religious icon Terton Pema Lingpa had jumped into the lake with a burning butter lamp in his hand. When he came back from under the water, the butter lamp was still burning.