Auroroa borealis, a magnificient fire works of Mother Nature.  Aurora is generated when charged particles from Sun enters the earth’s north or south pole area where magnetic force is at maximum.  This much is my knowledge about Aurora.  For more technical details you may read some excerpts from Wikipedia

An aurora (plural: aurorae or auroras; from the Latin wordaurora, “dawn”) is a natural light display in the sky particularly in the high latitude (Arctic and Antarctic) regions, caused by the collision of energetic charged particles with atoms in the high altitude atmosphere (thermosphere). The charged particles originate in the magnetosphere and solar wind and, on Earth, are directed by the Earth’s magnetic fieldinto the atmosphere.

In northern latitudes, the effect is known as the aurora borealis (or the northern lights), named after the Roman goddess of dawn, Aurora, and the Greek name for the north wind, Boreas, by Pierre Gassendi in 1621. Auroras seen near the magnetic pole may be high overhead, but from farther away, they illuminate the northern horizon as a greenish glow or sometimes a faint red, as if the Sun were rising from an unusual direction. Discrete aurorae often display magnetic fieldlines or curtain-like structures, and can change within seconds or glow unchanging for hours, most often in fluorescent green. The aurora borealis most often occurs near theequinoctes. The northern lights have had a number of names throughout history. TheCree call this phenomenon the “Dance of the Spirits“. In Europe, in the Middle Ages, the auroras were commonly believed a sign from God. (Read more at http://en.wikipedia.org/wiki/Aurora_(astronomy))

It had been almost 2 years that I am in Iceland but could hardly see Aurora in full splendor.  I had some glimpses sometimes and tried to photoshoot them, but failed, as a powerful camera is required to shoot them… and P&S cameras dont shoot them).  Once I went to see the Aurora in the dead of night, but the car skidded on black ice, and fearful, we came back home. 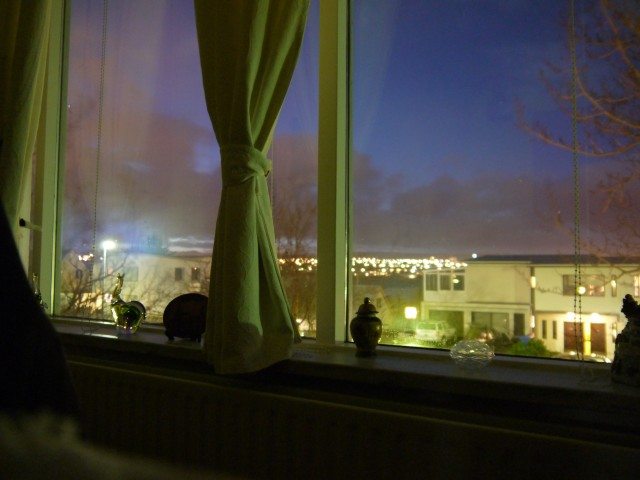 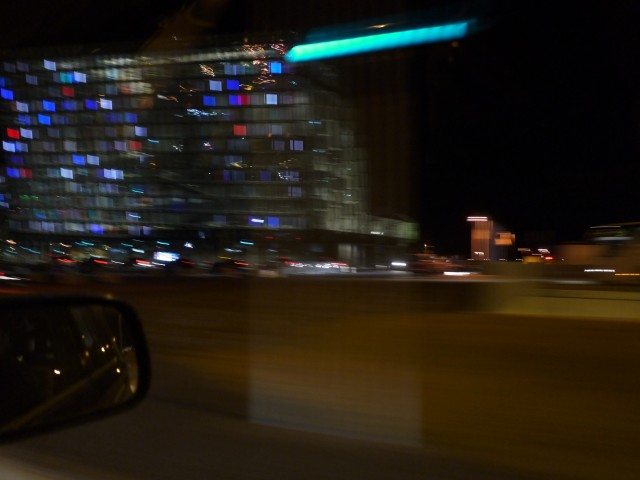 Harpa, the glass made opera hall at night

We passed by Harpa, the newly built opera house, which is all made of glass and steel.  The glass panels glow at different colors by electricity.   The church near our house was looking magnificent in night.

Church near my house

The we passed by the Light Tower of Peace.  This Blue  high powered light has been recently installed and gives a strange and cooling feeling of peace.  It is said that the light is visible upto 2 Kms in air on dark nights. 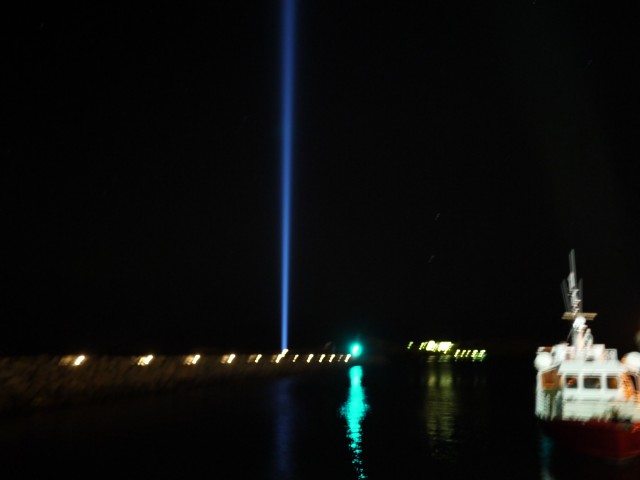 The city was leaving behind and we were rushing towards a desolate place where we could see the Northern Lights.  These can be seen if there is no moon and no city lights.  Since Iceland have geo-thermal electricity, the city lights are always on and are in plenty.  We have to go out of city to a place where even the faded light does not reach, only then we can see the Aura. 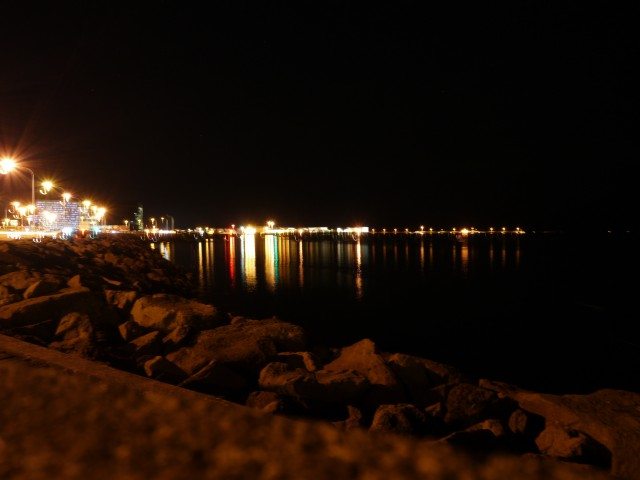 Finally we reached some 25 Kms out of city, beyond the sea and stopped near a farm house.  Although there were some lights in the farm house, yet Northern lights were dancing in their full splendor.  We were awestruck seeing the Nature’s Diwali in full swing.  I had not earlier seen such a beautiful lights of Mother Nature and could never photograph them.

I came out and tried to take some photos, but the camera refused to click, because due to lesser light, the auto-focus was not working and till it says focus OK, I cant press the shutter.  The modern cameras/machines  make us their slave.  The storm was gaining speed and it was impossible to stand outside.

I drove a little further, and at a corner, the speed of storm was a little less.   I called my friend, who is good at photography and on his advice, fixed the shutter speed at 4 seconds.  Since I did not have the tripod, I used car to fix the camera, hence some shaking was there due to storm and camera was not steady as it should be. 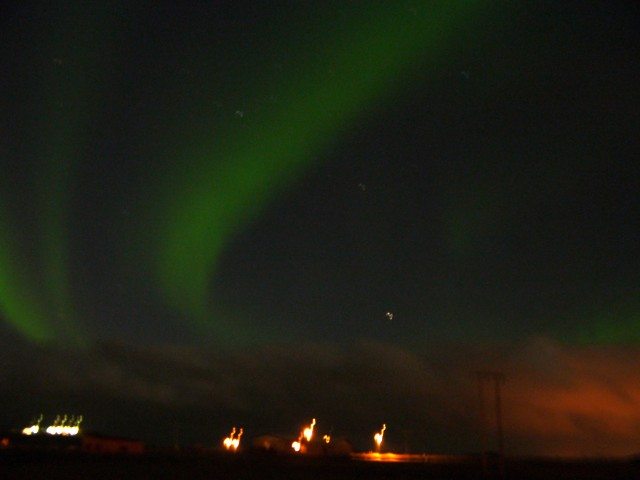 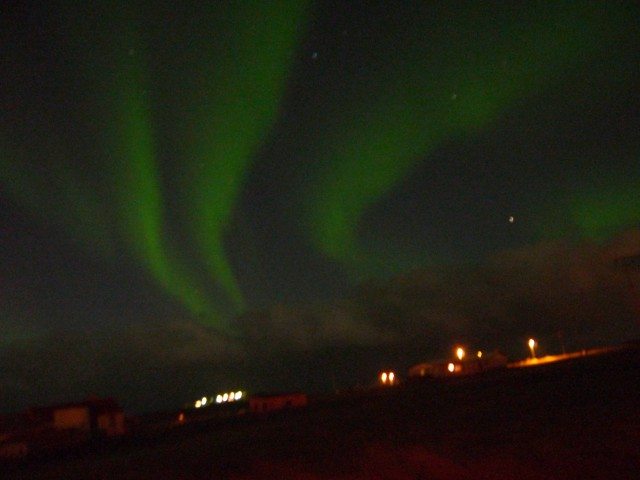 But finally I was able to shoot the Northern Lights, by focussing on some distant lights and then releasing shutter for 4 seconds.    I can not say, it was terrible shots, but these are my first professional photos of Northern Lights and when I saw them after I came back home… it was amazing show. 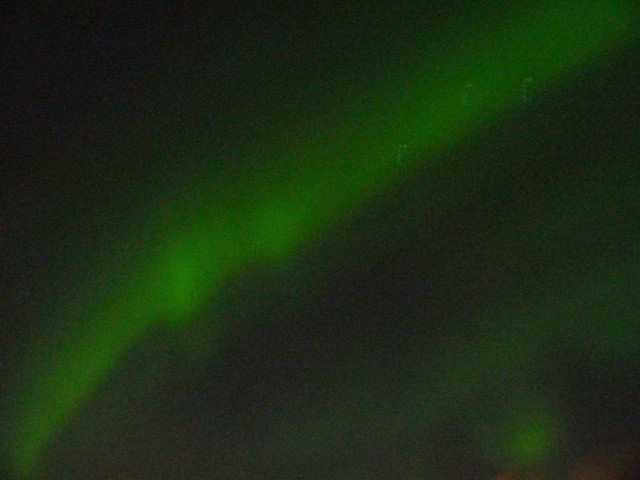 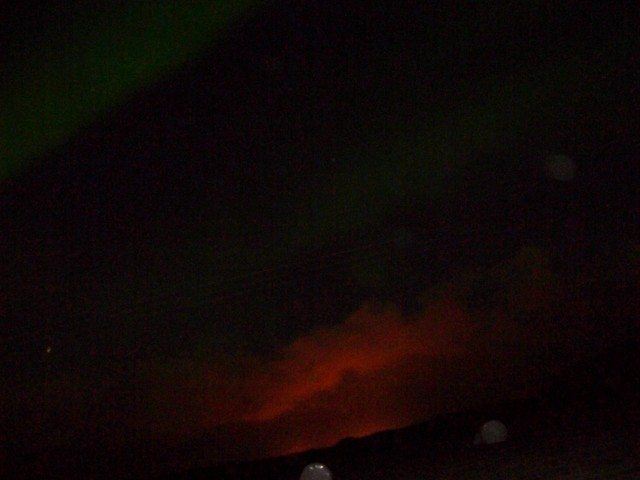 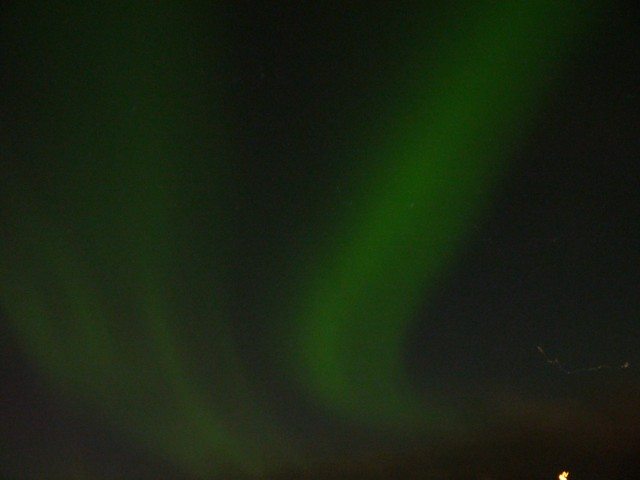 So friends after seeing the magnificent Aurora Borealis, we came back home amid the fierce storm.  Next day the news came that many cars rolled over on that route and that road was closed to traffic for two days…. soon the clouds gathered and all Aurora activities ceased to be seen.

We were lucky to have seen and photographed this great show of nature for our Ghumakkar friends and it was sheer luck that day which enabled us go there and see.

(I would be travelling when this post is published hence if I do not reply to your comments, please forgive me.  Thanks in advance for reading and commenting)

Darjeeling has much more to offer than its tea estates. Visit Darjeeling to witness its serenity, its colonial charm. Sharing tips for a memorable visit.