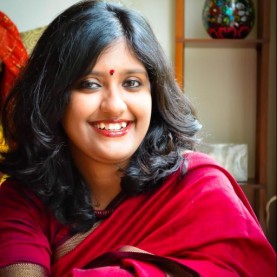 How lucky one can be when one gets to time their conference trips with one of their favorite festivals happening concurrently at a different city, in fact, a different country? Once the conference dates in Vancouver was decided, I waited with bated breath for the official announcement of the dates for the Skagit Valley Tulip Festival, about 70 miles and 1 hour 10 minutes drive north of Seattle on I-90 (Exits 230, plus minus one). The tulip festival has been my favorite things to visit in Seattle, and every year, I waited for Spring to arrive, heralding a trip to the daffodil and tulip fields.

Part 1- Northward ho! By Devasmita It is ironic that despite living in Seattle for 4 years, I had never once visited Vancouver BC,…

March and April are two of my favorite months. This is when the excruciatingly long winters come to an end, and new life springs in every corner and crevice. After seeing nothing but grey, snow white, and the bare skeletons of trees, it is a welcome change to see life sprouting, as buds, colorful flowers, and green leaves. Have you ever noticed the fresh greenness of the baby leaves in spring? The temperature has risen, but not enough to make you uncomfortable.

The caves resulted from the accumulation of layers of limestone over millions of years. The caves are confined to a 100 feet thick zone. Rain water trickles, dissolving the carbon dioxide to make a mildly acidic solution of carbonic acid (secondary school chemistry, people). The acidic water percolates through the limestone, eroding layers and carving out shapes in the cave. A precipitate of lime forms, making stalactites from the ceiling and stalagmites from the ground join together to form limestone pillars. It is like witnessing a chapter out of a Geography textbook right in front of you. This is an active cave and new deposits are formed @ one cubic inch in 120 years.

Christmas in Leavenworth: It is the season to be jolly By Devasmita Chakraverty Over the course of my five years of stay in the…

An offshoot of the trip to Lisbon, one can easily spend 2-3 days marveling at the enormous palaces, forts, castles, and much more that Sintra is. Located about 30 km west of Lisbon, the trains that take you from the Rossio station in Lisbon to Sintra are frequent (every 15-20 minutes), cheap (was free with my Lisboa card), and extremely convenient. Sintra is a UNESCO World Heritage Site, its cityscape dominated by many mountains, palaces, and forts.

For the longest time in life, I resisted traveling solo. I was not as afraid of being lost as I was of the feeling…