I know it has been a lifetime since my last post here (Whirlwind Trip to Vancouver- Part 1
), especially given that this was a continuation post. It took me almost 5 months to compile the part 2 post for my Vancouver trip. It was an extremely busy summer, both in terms of work and travel. You see, the last year of your PhD is supposed to be the hardest, but I will not bore you with my academic overtures. Long story short, I had a wonderful summer, traveled a lot, relaxed even more, and am excited about sharing all my summer stories here. And yes, the fall season is almost here !! 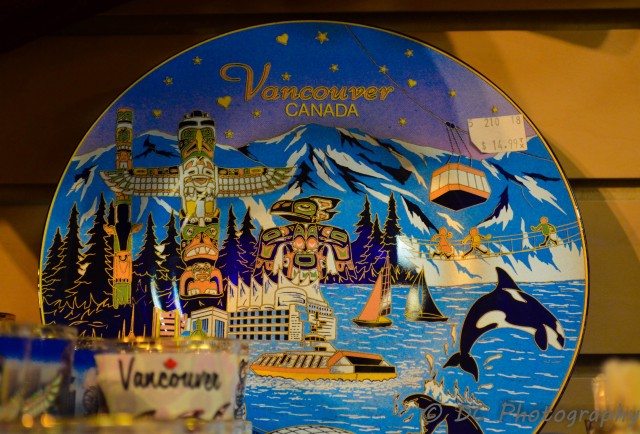 Between presenting at the conference and networking with people in the field, I was fortunate to be able to take some time off and explore in and around the city. This included a dinner at a local restaurant and walking in and around Gastown, taking a leisurely walk by the Stanley Park, and an entire day spent exploring the Capilano Suspension Bridge and the Grouse Mountain.

Gastown is a national historic site, famous for its cobbled streets, historic buildings, nightlife, and numerous restaurants dotting the streets. It was not that far from my hotel in Canada Place or my conference venue at the Convention Center, and I just walked. However, you can take a bus, a cab, or the Skytrain. Our presentation team had dinner at a local pub, and we were walking back when we saw a group of photographers lined up. Apparently they were shooting the very famous steam powered clock in Gastown that was built in 1977 to harness the steam. We spent 3-4 hours at Gastown, including dinner, and it was great. 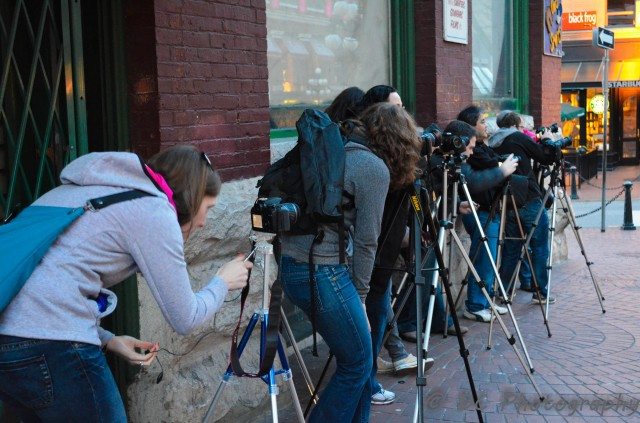 That night, I had dinner with an old friend from Seattle in Banana Leaf. Located at Delman Street, this is one of the best Malaysian cuisines I have had here. They even serve you green coconuts or daab, something I rarely find in the US (not the packaged ones).

The next day, we were off to visit Capilano Suspension Bridge, followed by the Grouse Mountains. Given that there were three of us, we estimated that we were better off taking a cab and sharing our expenses, rather than waiting for the bus. Yes, Capilano Suspension Bridge is accessible via bus too, but it takes longer. And why am I telling you all this? Because if you are in Vancouver, BC and want to explore the touristy places, you can very well find your way without renting a car. Yes, renting has its own advantages and conveniences, but you know what, nothing is worth the hassle of trying to find parking in a big city, and having to parallel park. Experience speaks so. 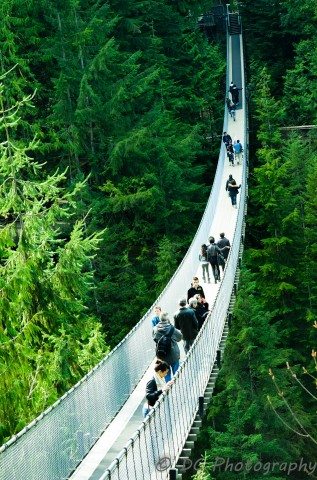 Built in 1889, Capilano Suspension Bridge is one of the most popular tourist attractions in the area. If you have seen pictures of your friends standing on a white metal bridge that seems like hanging in between trees, almost looking like the Lakshman Jhula bridge, without the high guardrails of course, this is the one. There is a unique flavor of history and culture in the area. Poised almost what seems like precariously over the Capilano river, you can feel the bridge swaying sideways as more people cross it. While you are in the area, there are a couple more places you can see, all of which is included in your ticket. The Cliffwalk is a cantilevered walkway poised high above the Capilano Canyon, and it will take you a lot of willpower to be able to walk around it, not feeling dizzy when you look down. The walkway is a little more than a year old, and in some places, it is high, narrow, and made of glass. Imagine walking on glass, seeing the deep canyon at your footsteps. Honestly, for me, it was thrilling, and it was scary as hell. Next, try the treetops adventure, which through a combination of seven suspension bridges takes you all around the evergreen rainforest. Lastly, do not miss the gift shop for souvenirs, handcrafted gifts, jewelry, and of course a chunk from the selection of a wide variety of fudges. Everything was included with the admission ticket, which cost us nearly $34/person. The hours of the park vary according to the season. You can easily plan to spend more than half a day in the area, if not more. And yes, sometimes people at the reception desk of hotels provide a $2-4 discount voucher for entry passes, so be sure to ask your hotel if they provide it. 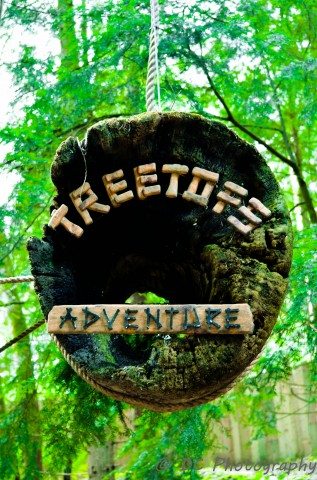 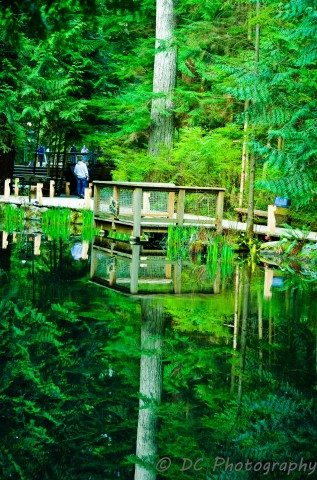 Mirror image by a lake 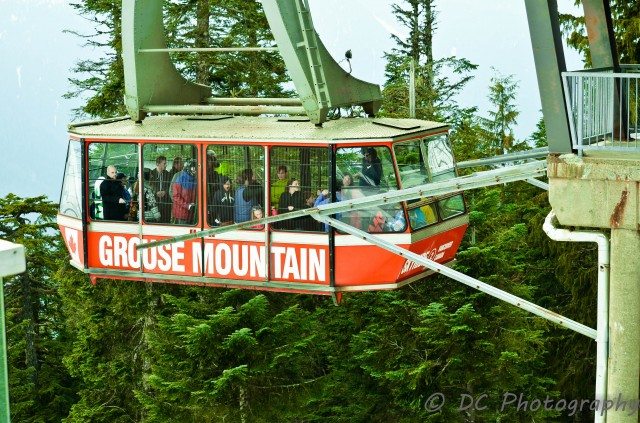 Our last touristy stop was the Grouse Mountain, also known as the peak of Vancouver. This was another 10 minute drive from the Capilano Suspension Bridge, and the cab fare was pretty reasonable. What was expensive was the entry ticket (~ $34/person roughly), that includes access to the mountain via Skyride (round trip), amongst some other things that I did not look into because they involved snow. The place was pretty crowded, and deep in snow even in April. The place offers a wide varieties of season-dependant activities including skiing, snow boarding, snow shoeing, and ice skating. For me, it had to be being happy taking pictures of the city on the foothills, which was not great because the clouds had crept in by the time we reached atop the mountains. However, I hear that you can get some beautiful shots of the city on a clear, sunny day. So check the admission prices and the hours of operation before you get there. 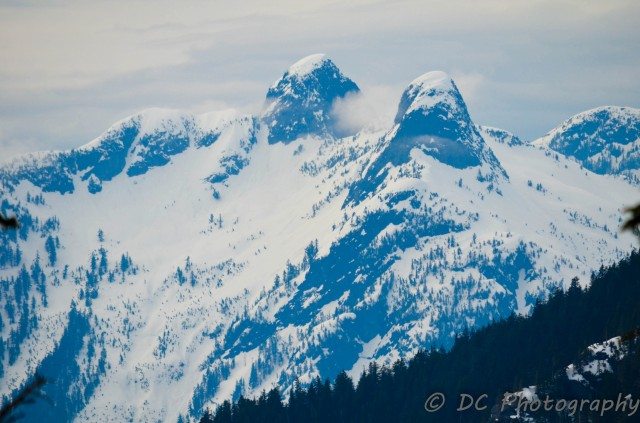 View from the Grouse Mountain 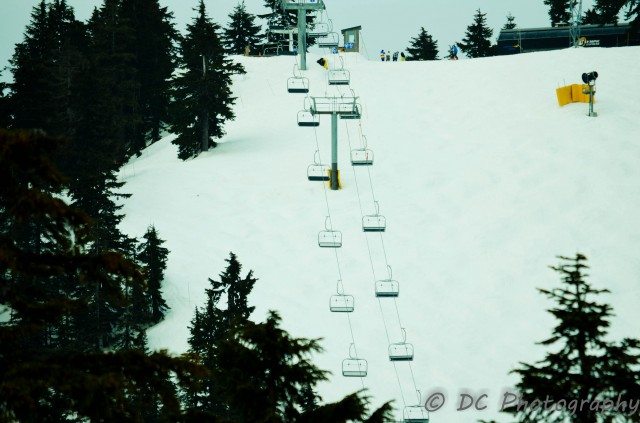 Sunset by the Pacific on a train 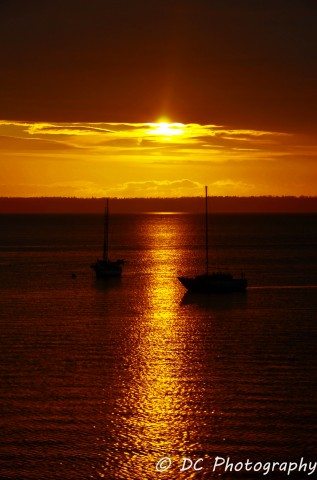 Sunset from the train

The last memorable piece of this wonderful maiden trip to Canada happened to be on the train. On my way back from Vancouver BC to Seattle (4 hours one way, $76 roundtrip), I saw a wonderful sunset by the mountains and the Pacific Ocean. Immigration and crossing the Canada-US border was a breeze, since it takes much less time on a train than it does on the road. The train ride was wonderful, with free wi-fi access, spacious bathrooms, and a well stocked pantry. As I watched the sunset from the train, chomping on my Chicken Caesar Salad, I smiled at all the happy memories I had made, the train ride, visiting the mountains, giving a talk in front of my colleagues, walking the paved pathway to the Convention Center every morning, and wondered when I would be able to visit Canada again. When my train had entered the US and I had phone signal again without having to go on international roaming, I called my mother, telling her that I had re-entered the US without any hassles. I also told her that I had at last made a little travel achievement- I had finally completed visiting the 10th country.

From Naggar, one can hire bike and go around places, do hiking and on the way visit the famous Roerich Art Gallery. We kept climbing uphill for over an hour only to find ourselves in the middle of an apple orchard. We sat there for a long time plucking and eating fresh apples and berries form the trees while soaking into the amazing view and the silence all around. Coming close to nature has become a luxury for city dwellers.