Summary of the trip: 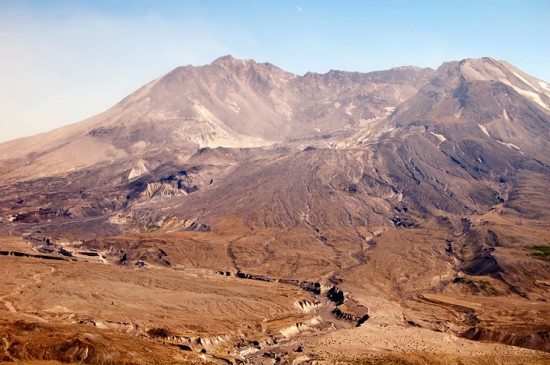 An amazing view of Helens from the Johnston Ridge Observatory.

Please also notice the solidified tracks of lava snaking all along.

A view of the crater from the helicopter.

I’ve always had a fascination for volcanoes. The sheer power exuded by nature in it’s form kept me awed and humbled whenever I watched volcanoes erupting on TV channels. Living in Seattle provided a wonderful opportunity to explore the volcanic mountains of the Pacific North West (like Mount Rainier, Mount Baker, and Mount St. Helens). The most interesting amongst these is Mount St. Helens that last erupted in 1980 (5.1 on Richter scale), scooping off the head of the mountain in the process and making it “the deadliest and most economically destructive volcanic event in the history of the United States.”As quoted in the wikipedia, “The volcano is located in the Cascade Range and is part of the Cascade Volcanic Arc, a segment of the Pacific Ring of Fire that includes over 160 active volcanoes. This volcano is well known for its ash explosions and pyroclastic flows.”

You can visit either the north face of the Helens or the South face (you can’t do both in a day). I have been told that the north face has the best view of the crater (and is closer to Seattle as well). The southern face has interesting points like Ape Caves, but I am yet to visit it. 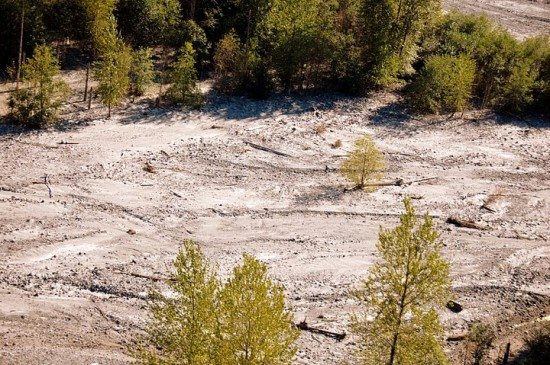 The soil is all barren ash that barely supports vegetation 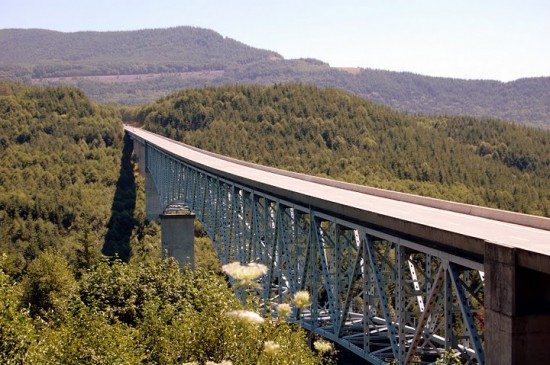 The bridge that was built after the eruption

Some lake (possibly Coldwater Lake) as observed from the helicopter.

The directions are pretty straightforward. From Seattle (roughly exit 167 depending on where you are), you drive on I-5 S for about 117 miles (2 hours) till you reach exit 49 (Castle Rock/Toutle). Then you go on Spirit Lake Highway/504 for about 45 more miles. Overall, it’s a 160 miles journey taking about 3 hours each way.

Volcanoes destroy the geography of the earth and create new ones.

Coldwater Lake didn’t exist before but was formed after the eruption when the lava cooled down.

Once you take the exit off Castle Rock, make a stop at the Mount St. Helens Visitor Center at Silver Lake/Seaquest located within 5 miles from I-5 S on exit 49. It’s worth a visit for $3. Pick up a map there. Take a look at the exhibits.

The Forest Learning Center is the next, and this is where you would board the helicopter if you took one. It has a gift shop too. I’d recommend doing it on the way back. 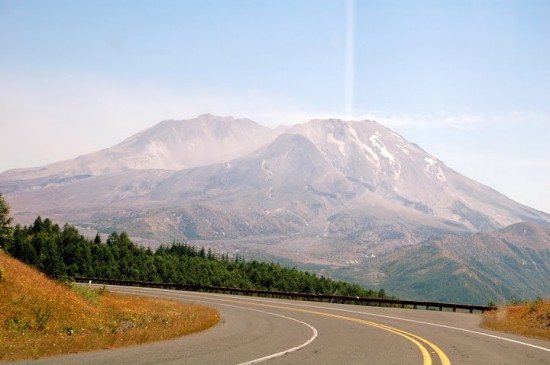 view of the helens while driving towards the Johnston Ridge Observatory

The last and undoubtedly the best one is the Johnston Ridge Observatory with the best view of the crater. Don’t forget to watch the short ~ 15 minute movie (free) with the history of the eruption. It can get quite windy and chilly depending on the weather (even on a sunny day), so be prepared to dress in layers. 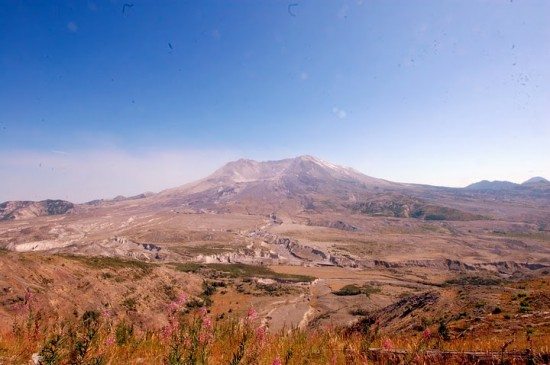 Vegetation eventually grew again years after everything was destroyed by the lava.

Such is the resilience of nature

The helicopter ride is expensive (~ $160/person/30 minutes), but is totally worth it for a first timer interested in looking at the crater from a close quarter. Many people hike and climb Helens (I haven’t), but depending on weather conditions, you need prior permission. I was more than happy observing the crater at a distance from the Johnston Ridge Observatory and the helicopter and taking pictures. 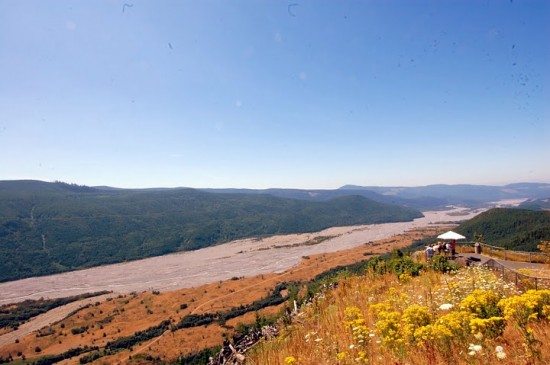 The helicopter seats 4 people plus the pilot (1 at the front and 3 at the back). They will allocate seats depending on the body weight distribution so as to balance the weight on the helicopter. Sitting besides the pilot at the front is great. Sitting at the back (either left or right) is fine too as you can directly look through the window. The worst is sitting at the center, sandwiched in between two people at the back (the seat I got) because then you need to crane your neck and can neither see the sights well, nor can take good pictures from the air. Pray hard that you don’t get the back center seat. 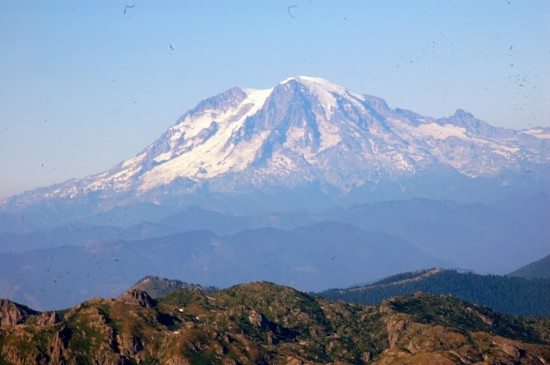 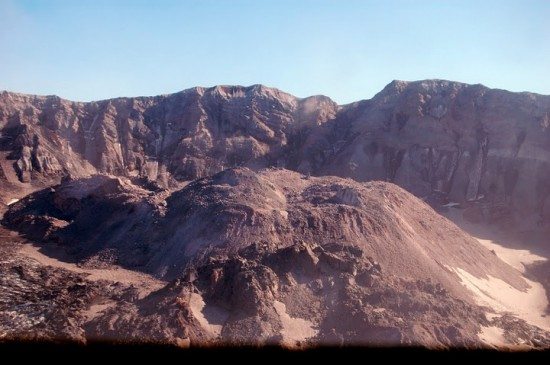 Lava dome resurrecting itself slowly into a mountain head 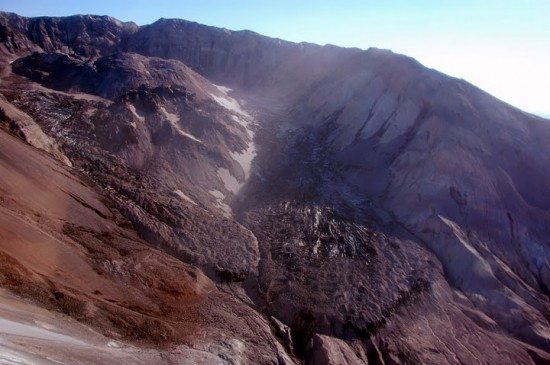 Evidence of glaciers forming- the youngest glaciers in the world 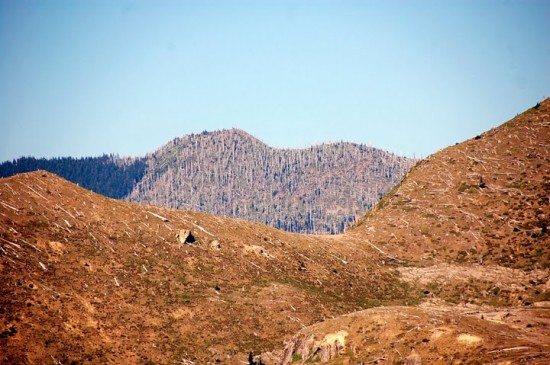 Dead tree stumps still stand in place even after 30 years

I didn’t realize the importance of this picture till a geeky friend told me that this arrangement is called the nematic ordering of liquid crystalline phase. Whatever that meant 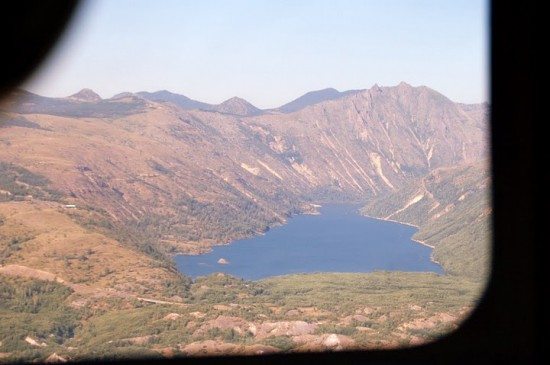 Close view of the crater from the helicopter. 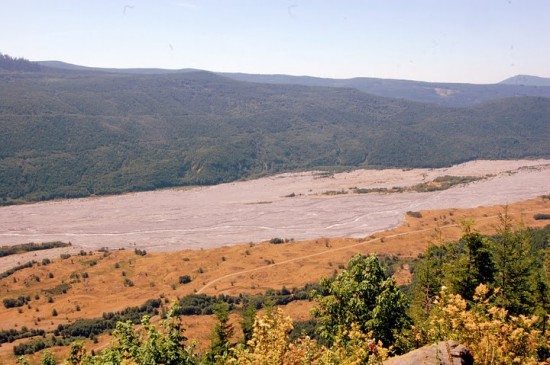 Another picture showing the path of lava flow

Overall, exploring the northern face of the mountain is easily a 1 day trip from Seattle, and there are reasonable dining options and gas stations on the way. It’s going to be an amazing experience, very unique and one of its kind.