Starting off the New Year with Natural Bridge and Foamhenge 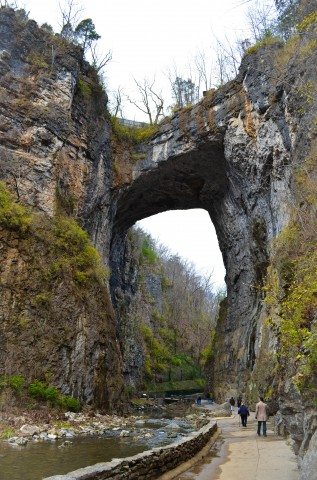 My school friend and I pored over Google Maps on New Year’s eve, trying to find a nice place to visit on the first day of the year. Most places were closed, and the rest were either too cold, or too far to visit. Georgetown, Jamestown, Morgantown, no town nearby seemed to appeal to us. Then, I remembered someone mentioning a visit to the Natural Bridge in Virginia. Continuing with our research, we saw pictures of twenty stories of solid rock, carved into an archway. We needed no further persuasion.

Located 200 miles and 3.5 hours southwest of Washington D.C., this is one of the oldest tourist attractions in the US. According to the website, “Popular with Europeans in the 18th and 19th centuries, Natural Bridge and Niagara Falls were the two wonders of the new world. The Bridge has been included in several “Seven Natural Wonders of the World” lists, mostly in the 19th and early 20th centuries. It has been designated a National Historic Landmark, a Virginia Historic Landmark, and is listed in the National Register of Historic Places.” 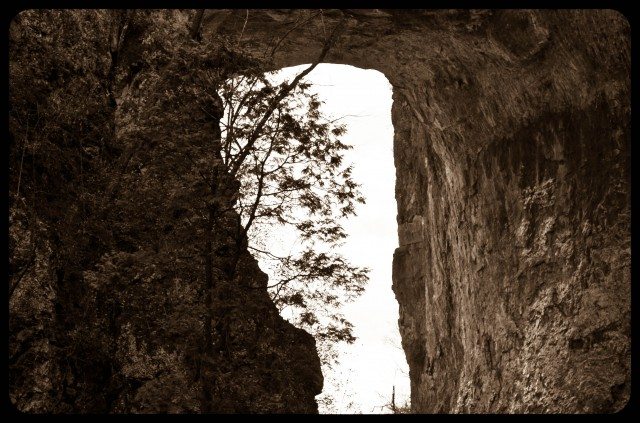 It is said that the bridge was formed when a cavern collapsed. There is abundant history associated with the bridge. No monumental landmark in the state of Virginia goes without some association with Mr. Thomas Jefferson. In 1750, George Washington, the first president of the US, surveyed the bridge and engraved his initials on the walls of the bridge. In 1774, Thomas Jefferson, one of the founding fathers of the US, purchased acres of land including the bridge for twenty shillings. The bridge was used as a shot tower where “bullets for American firearms were manufactured by dropping molten lead 245 feet from the top of the Bridge into Cedar Creek’s cold water below” during the Revolutionary War. 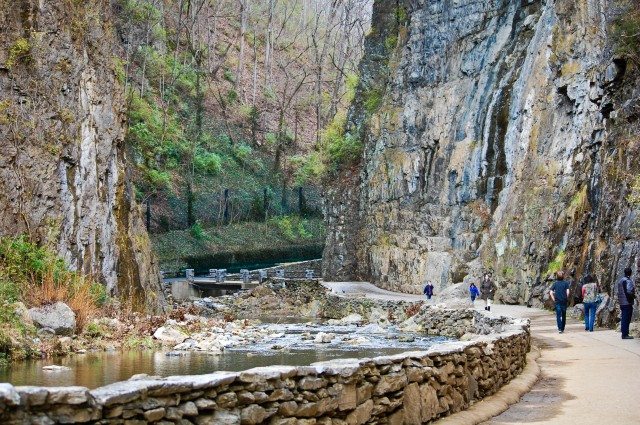 We bought tickets once we had reached the gift shop (~ $23, that includes a visit to the Natural Bridge, the Toy Museum, and the Wax Museum). We could have hiked down the 137 steps to the Cedar Creek Natural Trail leading to the bridge, but preferred to take the (free) shuttle instead, thanks to the cold and all the heavy camera gear I was carrying. For the next few hours, we walked the trail, passing the Cascade Creek, marveling at the beauty of the rugged archway of the bridge, and continuing for about a mile until we reached the Lace Falls. 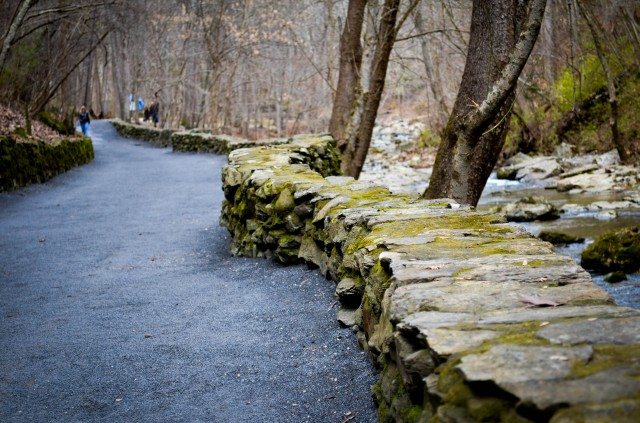 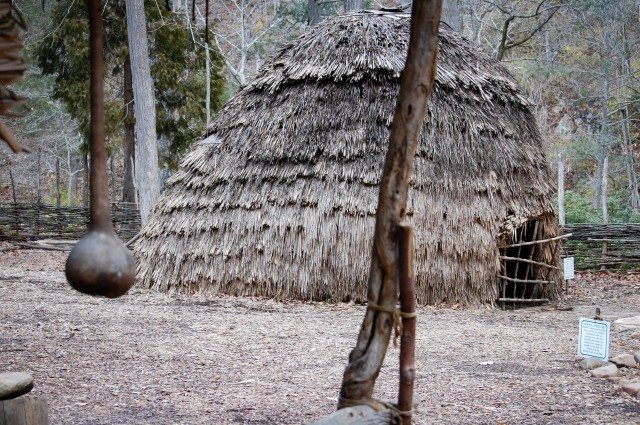 We also visited the Native American Village, the Toy Museum, and the Wax Museum during our visit. However, the Natural Bridge Cavern was closed for the season. We spent a wonderful, sunny (although cold) first day of the year visiting the bridge, taking a hike down the falls, spending a few hours listening to the birds chirp, the gurgle of the creek nearby, and sitting by the fireplace drying our wet socks and shoes once we were done for the day. We however missed the Drama of Creation. 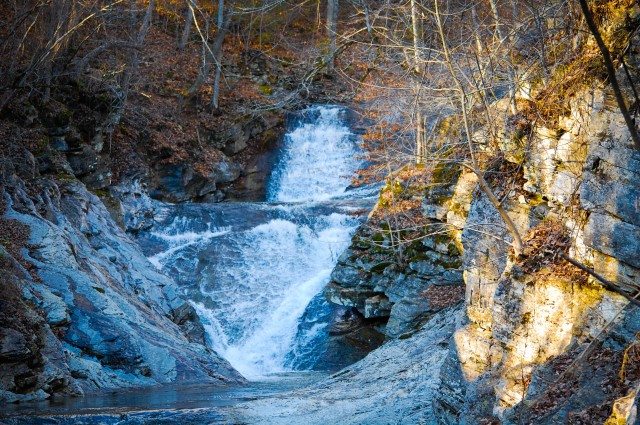 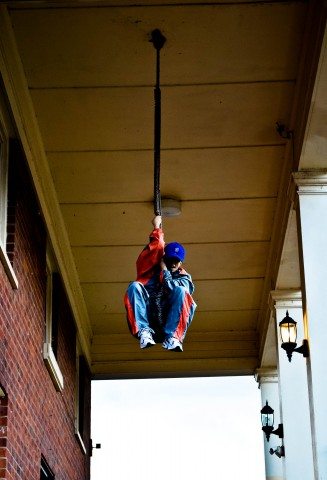 The entrance to the Wax Museum

The Drama of Creation is a show of the bridge illuminated at night. It runs daily at dusk between April and October, and on weekends during the winter. According to their website, it is “an impressive system of lighting which at night transforms the Bridge and glen into a marvel of living stone …. with a dramatic narration of the Seven Days of Creation, accompanied by classical music and moving lighting effects.” Perhaps someday soon enough, I will go back to watch it.

Our most interesting and unexpected and mysterious discovery was on our way back home, when we noticed random stone structures that resembled something we had seen in pictures and history textbooks. On our way back home, about 8-10 minutes drive from the Bridge off route 11, we saw a full replica of Stonehenge, a prehistoric monument in Wiltshire, England. However, this has been created using Styrofoam and not stone. While it took 1,500 years, 50-ton stones (each), and a thousand men to build Stonehenge, the Foamhenge was built in 6 weeks, using Styrofoam blocks weighing 420 pounds, using “4-5 Mexicans and one crazy White man to construct. Its purpose is to educate and entertain.” 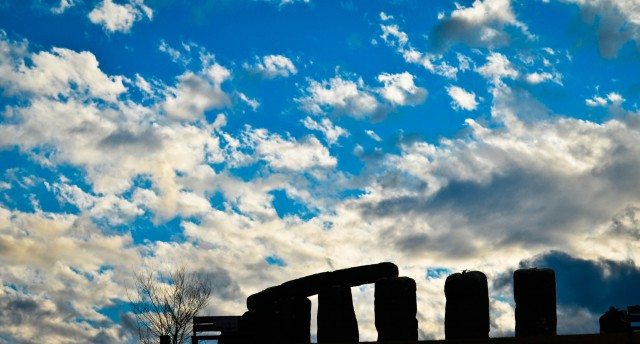 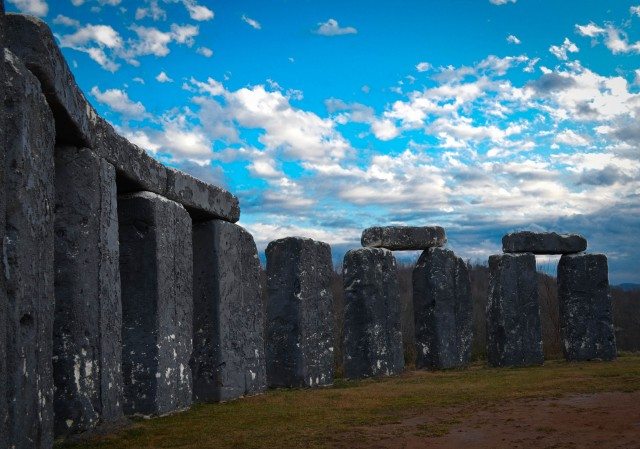 That day, we watched the sun go down by the Foamhenge, our shoes caked in mud, that took me hours to clean up later. I realized this would be a perfect prank to play, if you wanted to confuse your friends and let them into believing that you had visited the Stonehenge. Do not miss this one if you are visiting the Natural Bridge. 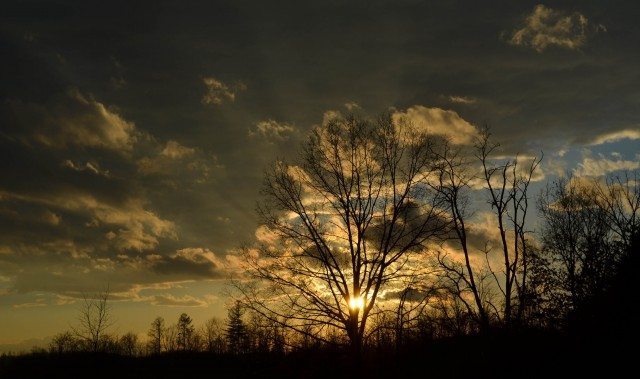 The first day of the new year started on a happy note, visiting some very interesting places. Hopefully there will be many more interesting places to visit and stories to tell this year. Wishing everyone a very belated but a super happy new year.

Starting off the New Year with Natural Bridge and Foamhenge was last modified: October 6th, 2020 by Devasmita