Next morning we wake up at around 6AM but due to severe outside cold conditions nobody was ready to come out of bedding. After some time we came out of the tent and checked the conditions outside. It was very cold outside and cold wind was flowing. We went to refreshed ourselves and it was a horrible experience with us. Toilets were clean and sweepers were cleaning them after every use but the water was damn cold. A single touch of water was sufficient to numb the hand and rest you can understand………

Problem does not stop here, when we started brushing, same happen to our teeth due to cold water. Anyway, in these cold conditions no one can dream of bath so we get ready to move. We left the tent and moved towards Langars section. Here at Sheshnag all langars are outside of camp and towards Panchtarni side. First of all we took hot tea, then light breakfast and then again hot tea. After breakfast we started moving towards Mahagunus Top, also known as Ganesh top which is the highest point in this Yatra. We hired two ponies one for Naresh Saroha and another for Swarn as they were not comfortable and asked them to stop at BabalTop and wait for us.

There was snow all around the Sheshnag and after that. Due to melting of snow the track had become slippery and many Yatris were falling due to it. We kept walking with caution on right side of U type Valley for some time. This was straight track without any ascend or descend .After around one and half kilometer we cross the river and came towards left side of the valley and from here first gradual and then steep, rocky and very difficult climb starts towards Mahgunas top. 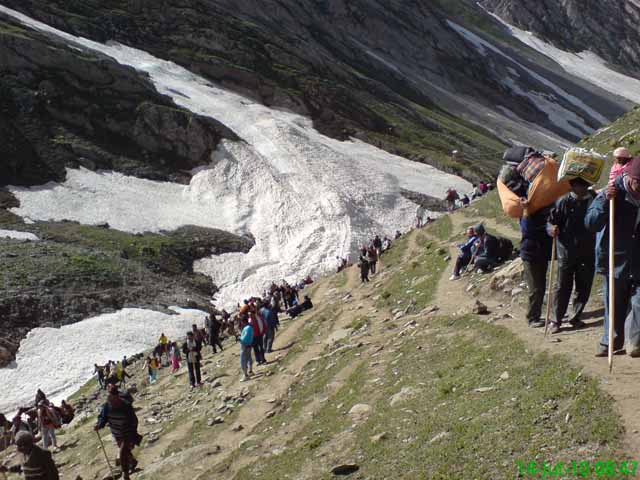 Track towards BabalTop is so difficult that a normal person cannot walk more than twenty steps in one go. The climb is not as steep as of Pissu Top but due to lack of oxygen and high altitude it is most difficult. I was walking with twenty- twenty rule i.e. walk twenty steps, stop for rest, take twenty long breaths and again start walking. This was the situation for all.

Babaltop is 3 kms away from Sheshnag .It is steep and rocky climb. After two hours of tedious and hard journey we reached BabalTop. It was really very tough to reach BabalTop. When you are marching towards BabalTop, and when Babaltop camesvisible it seems that this point is the highest and you are going to achieve it shortly but when you reach there you find that one another mountain is still standing high and need to be climbed. That mountain is Mahagunus Top. 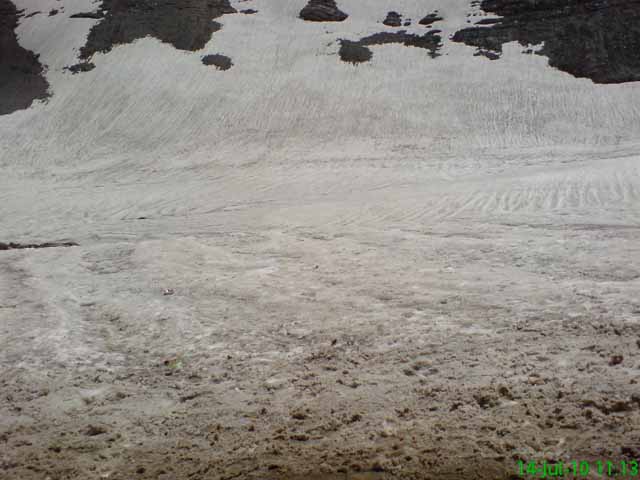 On reaching BabalTop we were welcomed by BSF personnel who served us hot water to drink. There were two- three Langars providing food and hot tea to Yatris. There was also a medical camp run by BSF which was providing assistance to Yatris. Naresh and Swarn were waiting for us at one Langar. We took tea, rested for some time and again started to move. We asked both our riders to wait for us and meet at Poshpatri. Our next target was Mahagunus Top which was just 1.5 kilometers away from BabalTop but the path is very rocky and had sharp edged stones under the snow. The entire track between BabalTop and Mahagunus top was covered with snow and was slippery. 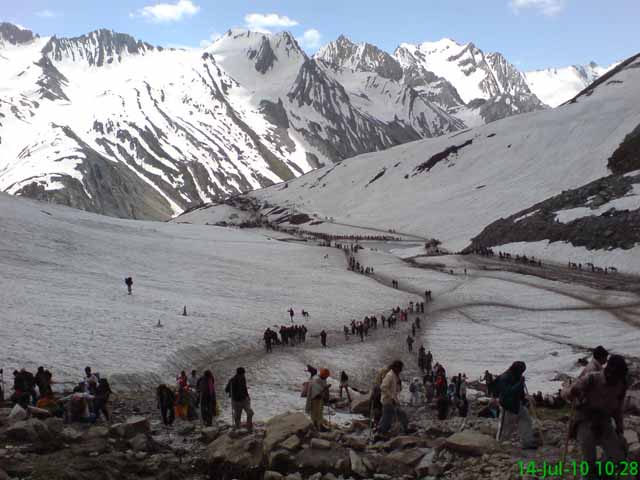 It is 1.5 kms rocky climb from Babaltop. Around 10:30 AM we reached MahagunasTop. Mahagunas Top is the highest point of the entire Yatra. It is a pass between two peaks which connects two mountain ranges and Sheshnag and Panjtarni camps. It is believed that here Lord Shiva and Devi Parvati left their son Lord Ganesha  and went to cave hence named Ganesh Top.

Due to snow all around heavy cold winds were blowing. We took a short photography session here and left this place soon as the clouds have started turning dark and there was no shelter nearby. Our next destination was at Poshpatri where we all have decided to meet. From Mahagunus top to Panjtarni there is either plane or descend track and at some places there is sharp descend. Due to snow, it becomes more difficult to descend. We were moving fast so that we can reach at Poshpatri before it started rain. 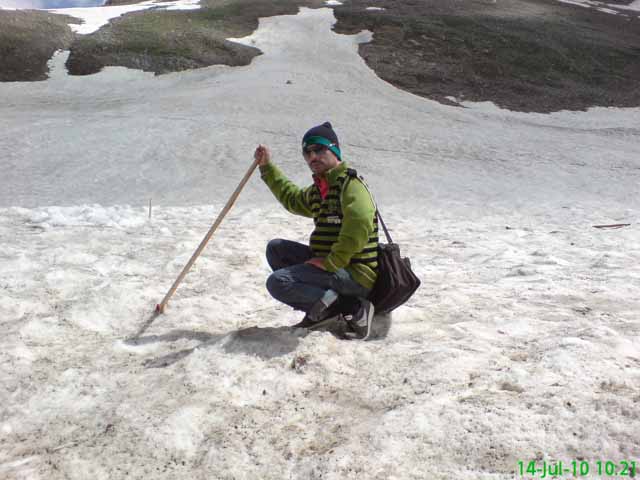 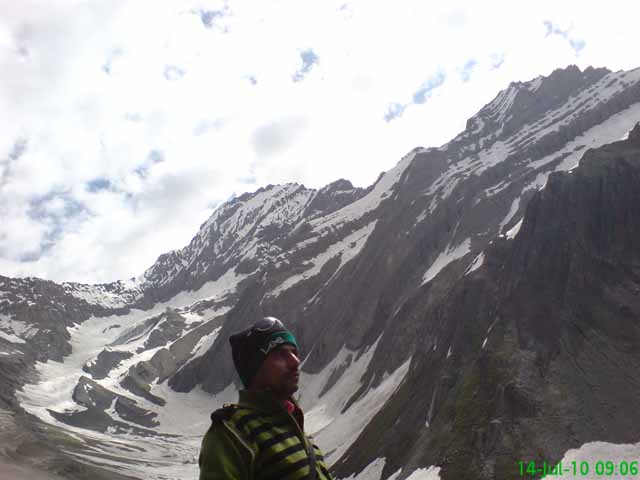 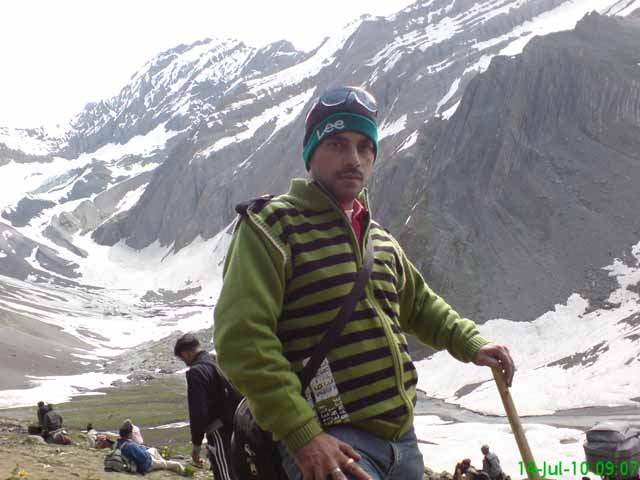 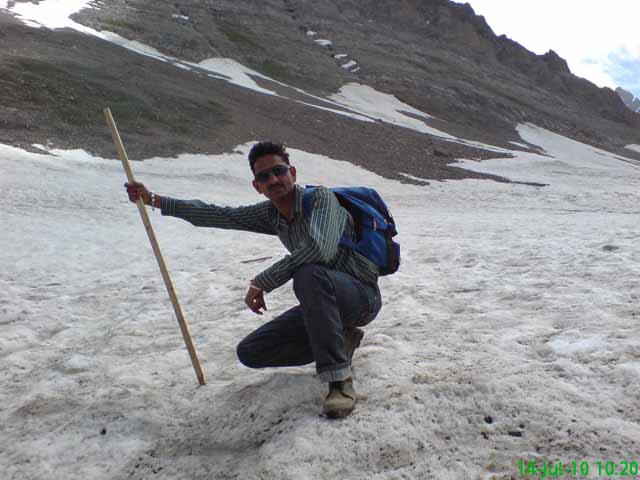 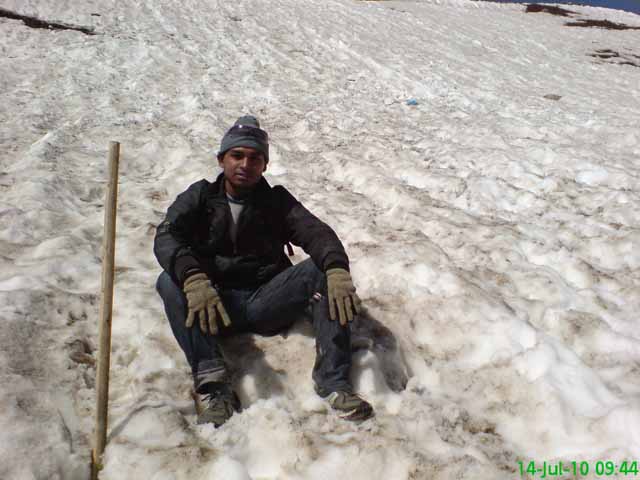 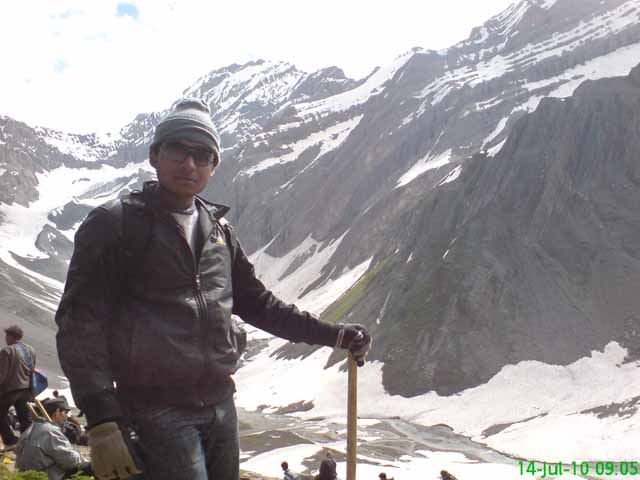 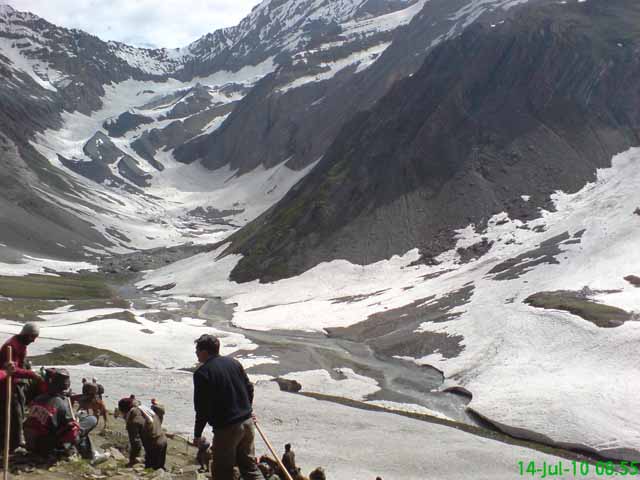 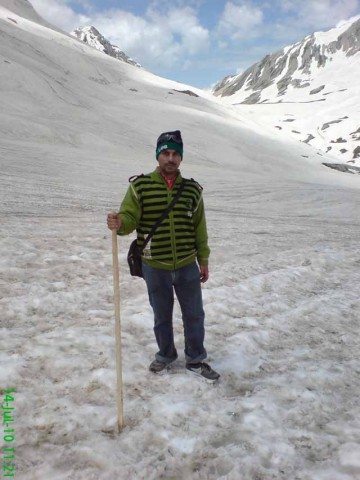 Poshpatri (14000 feet) is another 1.5 Km away (all descend) from MahagunusTop. In half an hour we reached at Poshpatri. Swarn had hired the pony till MahagunusTop only and he was lagging all but Naresh Saroha had hired the pony for Panjtarni and already reached Poshpatri and was waiting for us. We sat there and waited for our rest of friends. In half an hour all reached there, we took some sweets and some snacks. At Poshpatri, “Shree Shiva Sevak Delhi” arranges Bhandara here every year with variety of tasty dishes. It is believed that they prepare 56 types of dishes daily for Bhog and Langar. Have you enjoyed the ice cream at remote place with snow all around and temperature hovering near zero, if not in Poshpatri is the place for you.

After enjoying sweets and snacks at Poshpatri we again started our Journey. At Poshpatri we had decided that today we will stay at Holy cave. For this it was necessary for us to cross Panjtarni at 16.00 hours which is the final time to leave towards the cave at Panjtarni gate. After that security forces do not allow Yatris to go towards the Cave. 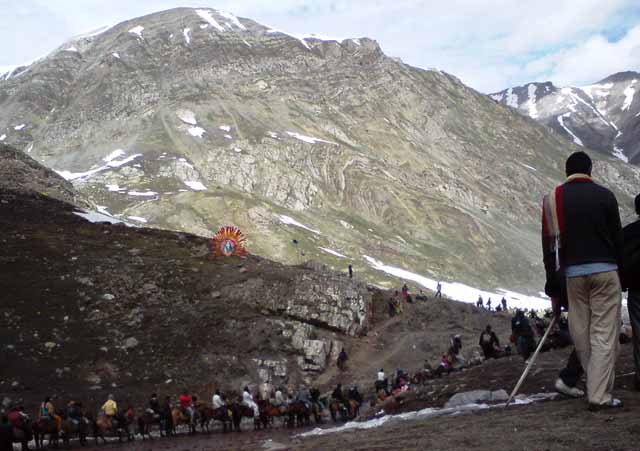 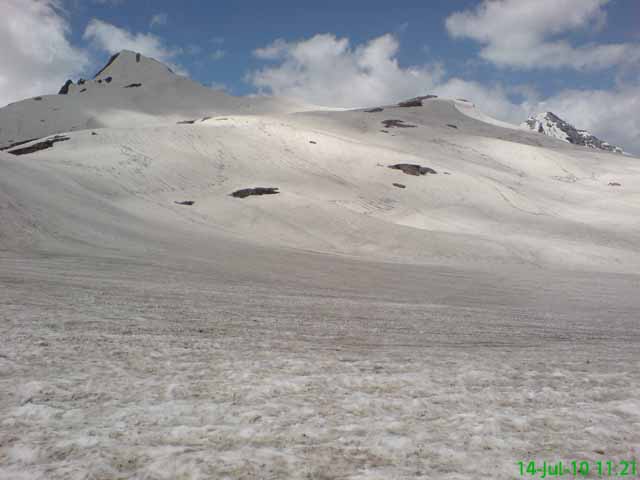 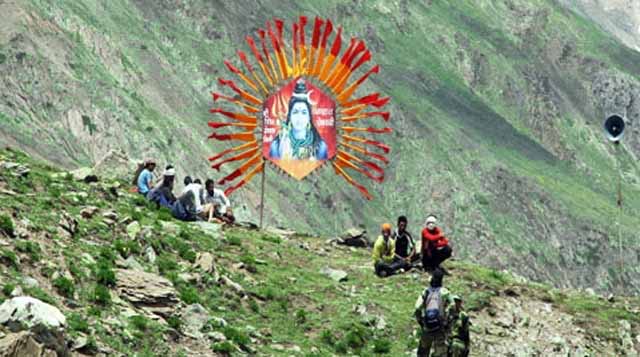 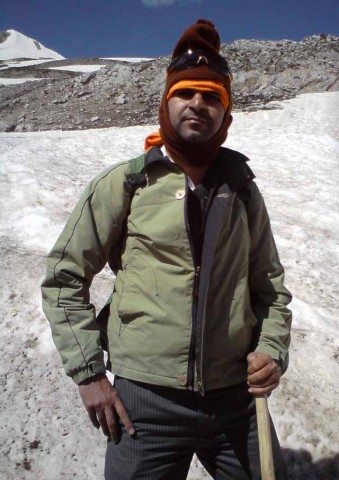 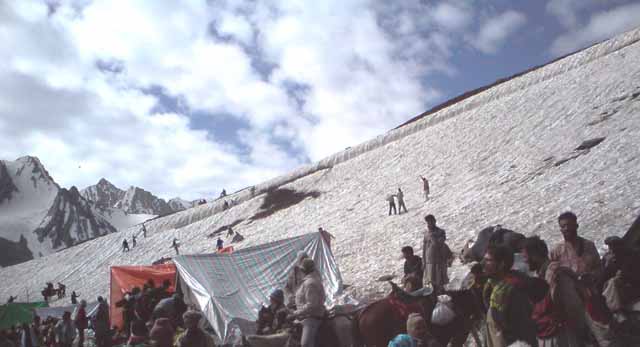 From Poshpatri to Panjtarni (12000 feet) the 3.5 KM long path is total descend but full of stones and rocks and we were moving fast so that we can cross the Panjtarni barrier before 4 PM. Soon we reached near Panjtarni but before we could reach the camps, an accident happened.

Sonu @ Rajiv, brother in law of Naresh Saroha had come first time with us and it was his first journey to Holy cave. He was walking ahead of us. Before Panchtarni camps, there is a plane area which is approximately 1KM wide and five different mountain streams are flowing through it. Some streams have less water and to cross those some big stones were kept but other one or two streams were mighty and wooden bridges were made to cross them. One such stream towards Panchtarni was very big and flow of water was high. It had a narrow wooden bridge on it. Many horses were coming from opposite side towards the bridge and Sonu tried to cross the bridge before them. We were about 100 meters behind him and saw him going towards the bridge. We shouted “Sonu stop. Wait for horses to pass the bridge” He did not listen or he could not hear us and ran towards bridge. The bridge was not very wide and had no fencing. On bridge he got a major side push from one horse and fell straight into the river from 10-12 feet height and due to high water current started flowing with water. On seeing him falling, the horse owner instantly jump into the water and caught him. We ran towards them and help them coming out of the river. Sonu was all in blood. He got a big cut on his wrist due to sharpened edged stones and some small cuts on legs. As we were not far away from camp, we took a pony for Sonu and rushed towards Medical camp. The doctors checked all the wounds, gave some stitches on his wrist and striped the wound and gave medicine. The doctor advised him to rest for night and perform journey only in the morning.

Though it was still 3:30 PM and Yatris were moving towards the Holy cave but due to Sonu’s condition we all decided to stay night at Panjtarni. We booked a tent @ Rs.250 per person and took rest in it. As there was enough time, I and some of us kept roaming there in different Langars and talking with security personnel and other pilgrims.

In the evening, after taking dinner we went for sleep.

Had we slept? Was our hard day over or hard night was waiting.

Rest in next post. Till then Jai Bhole ki…..