On 24th, we were destined for Mukteswar and the distance was around 155 KMs, through Almora-Berinag Road, NH 309A. It didn’t seem a long distance. So we decided to take a detour and cover ‘Patal Bhuvneshwar Cave Temple’. We took a little different route, partially NH 309A and then after “Timta” we took “Pithoragarh-Almora Road”. The distance to “Patal Bhubaneswar was 37 km and from there to our destination “Mukteswar Himalayan resort” was 151 km.

Road way journey
So we moved on. The road was good all the way except little congestion at the town stops on the way. Their were passes through forest area of Jhaltola which is very much appreciable for leopard sighting. Took left of almost 180 degrees at “Guptari bus stop” to “Patal Bhubaneswar Road” which was 8 km to reach the destination. At that point we were late as there were many traveler’s vehicle parked in the narrow road and even no space for turning our car for the time of return. I parked somehow and kept the turning matter for the time when we might return from cave sighting.

The cave temple is situated at the height of 1350 m above the sea level. The cave is 160 m long and 89 m deep from its entrance. It is actually 1 km stretched cave city. Cave enters into another cave, steps in another, like an ancient belief of mystery. These limestone caves are completely lit up using electric bulbs and they are generally safe. There are many stalagmites and stalactites that can be seen in these caves and walking through these can be a breathtaking experience. The complete network of caves has not yet been explored and there are many small passageways that can be found here. 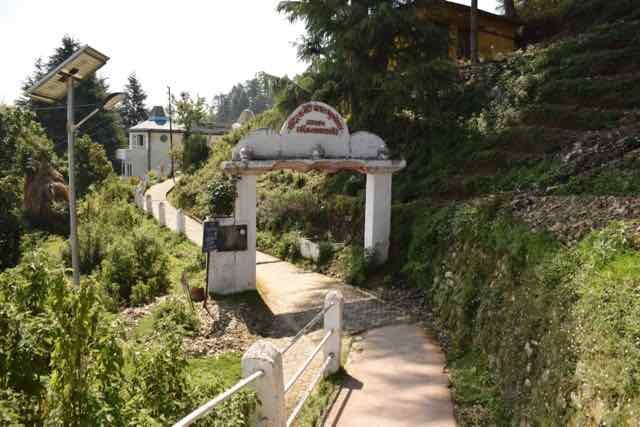 The caves have to be reached by climbing down a set of 100 steps and one gets the feeling of entering the depths of the earth on reaching the inner sanctum of the place. Every stalagmite and stalactite is said to resemble many gods, goddesses and other mythological creatures.

Tales from guide
There is a family of priests who perform the religious activities in the place, and they are a storehouse of many tales and myths. This is an interesting way to spend time in this place as well but which annoyed me, which the guide stretched upon the Hindu mythology and folklore not even a single sentence upon geology.

The guide told numerous mythological stories associated with many gods of Hinduism, mainly of Lord Mahadeva, the tail associated with “Bramha, Vishnu, The Seshnagh” and all the “Dwars”. It is said that this holy place creates more positivism with Gods than to take “Chard ham “darshan. According to belief the cave was discovered by “King Rituparna” of “Sun dynasty” in “Treta Yug”. There was a description of the place in “Manas Kund” of “Skand Purana”.  The belief also describe about the cave in the sanctum, that “Pandava” used to resides there.

Apart from mythology the limestone creation is thrill fully unique, the cave is still building from crystallization. The many forms resembles the tail of Gods, one unique formation described as the spine of “Sesh Nag” and one ice like formation is called “Jyota” of Mahadeva, a mushroom like formation holds four stalactites called the four ‘Yug”. It is said that when a specific stalagmite would touch the stalactite hence the “Satya with Kali”, the earth may end. For both the believers and non-believers the place gives a life time experience.

On the return I somehow managed the car to turn. There was a broad space in front of the Gate to the walkway of the stairs of the cave temple but the place was under some maintenance, so the only available option was to turn the car in a very narrow space provided for a single vehicle.  On the return, we took the road which we left from “Guptari Bus stop” before to take  “Gangolihat-Timta- Pithoragarh Road”, which is also NH 309A until just after “Timta”, where 309A goes abruptly left and we slided right to “Almora-Pithoragarh” road.

From near the junction River padmawati flowed nearby all the way to “Nayal Dhura”. Near “Suakhan, Ladholi”, left “Pithoragarh-Almora Road to slide left to be reached on “Lohaghat-Debidhura-Almora Road for 20 kms. The road was under construction in many places and had heavy to light patches at some places. In some distances the human habitat was coming. The weather was considerably hot comparative to our last hilly places. The scanty traffic continued until we reached state highway, which was newly constructed with smooth tar.

The beauty was awesome with amazing panoramic view all over; As soon as we reached “North Gola Range” the road started climbing with places of descent, twisty, smoothness. Hurdled by numerous hair pins we follow the map direction to our destination around 1600 hrs. Near Mukteswar my car was half full and for long time we didn’t notice any pumps but the only near our destination had only diesel.

Mukteswar himalayan resort
Later we discovered that the problem could be solved by loose fuel illegally supplied by the locals but I rejected the offer to avail the first sighted pump on the next day’s journey to Nainital. , Abundant beauty of nature was just out of heaven when we covered the last 5 Kms of “Betalia-Dhanachuli-Bhimtal Road, which can be trekked also through the village way.

As we passed last lag of escarpment through the forest area the Resort was there near a denuded area like meadow, partially covered by forest at one side. The area was a highly maintained reserve forest area with was partially barricaded and locals informed us about the frequent visit of a large leopard at dawn and dusk. So after check in there was some time in the  golden lit late afternoon and we moved out for a brisk stroll with some hopeful shorts of bird but the local cat story made us little freaky and unsafe for our boy and we returned at sundown inside the Resort.

The resort was beautifully arranged, hand crafted of some small leafy plants, varieties of high altitude roses. Some recreations for children were there in places, a beautiful sunrise point and some sitting arrangements for all inside a lovely green garden. Even one can hear touchy flute from a kumayooni local when passing the garden, appointed by resort staff.

I wouldn’t have describe about a hotel or resort over here but I thought it must be useful for all budget travelers who wish for a great stay at Mukteswar. Personally I felt depressed for next day’s scheduled departure for Nainital. The total isolated lone sport of the resort in the lap of nature, outskirts of the jungle just outside the campus, excellent room service and food quality made me feel utterly lost in paradise. 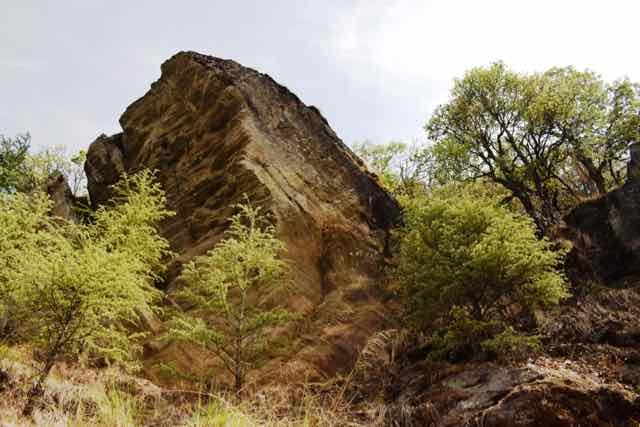 We were destined for Nainital and for a well short journey within the reach, so got up early to make a morning walk on the jungle road and after breakfast checked out and directly started for Mukteswar View points for Mukteswar sighting.

The name “Mukteswar” originated  from an 350-year-old temple of “Lord Shiva” known as “Mukteswar Dham”, situated atop the highest point in the town, little away from  the veterinary institute’s campus souk. Close to it lie the overhanging cliffs, locally known as “Chauli-Ki-Jhali” used for rock climbing and rappelling, with an excellent view of the valleys below.

The place is also a sacrid one for those women who have conceive problem, thus a large number of devotees used to came on specific time to fulfill the rituals to conceive a child. The sunrise point is at the government-run PWD guest house. One can also visit the Indian “veterinary Research Institute. Mukteswar is the abode of a saint named Shri Mukteswar Maharaj ji ,who lived at the Top Cottage Temple where his “Samadhi” is. His disciples still lives there. The whole temple complex is an ideal place for meditation. The temple was constructed back in 15th century by a Tamil King. 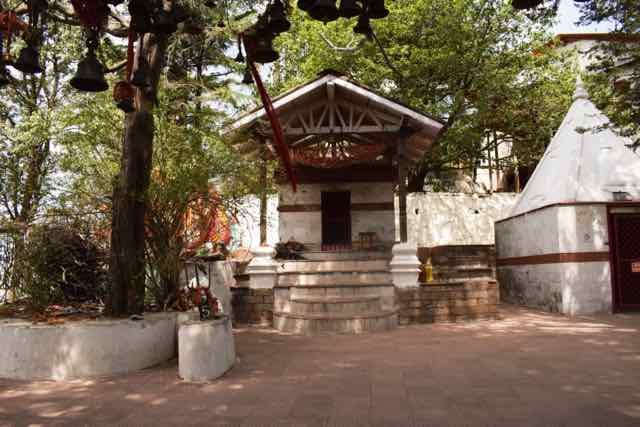 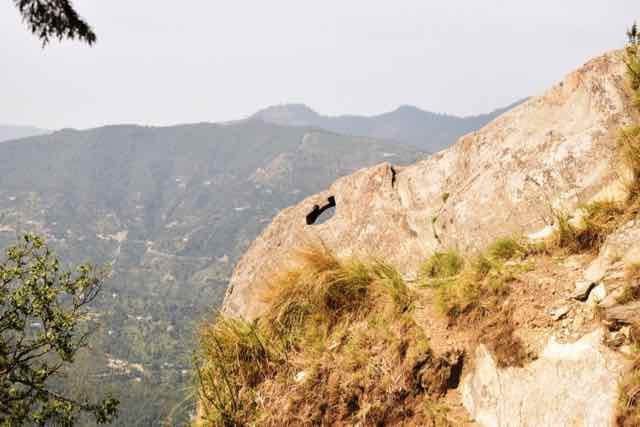 Before the Vet research Institute was settled for research on cattle Plague now a day on tiny rats, cattle. Deodar forest, pristine snow-peak views, and the adventure of living among wildlife full of apex predators like Leopards, deer and bears are some of the major attractions of that sleepy town.

The charm of visiting Mukteswar lies in enjoying nature, listening to air gushing through deodar forests, bird watching, meditation, and seeking peace. The cleanliness, solitude and nature can was simply breath taking. The Guide showed us a great fall from the cliffs of “Chouli Ki Jhali” Far down below the Ramgarh was in sight covered with lash green forest, many apex predators with Bengal tiger can also be found there. We roamed inside the forest with the guide before to start for Nainital.