The Mahashivaratri festival is upon us, so I thought it appropriate to post about the World’s Largest Bronze Nataraja at Konerirajapuram.

Konerirajapuram is a sleepy little village surrounded by paddy fields in Tamil Nadu’s fertile and historic Cauvery Delta. In ancient times it was known as TiruNallam. Konerirajapuram’s claim to fame is the huge bronze cast icon of Lord Siva as Nataraja at the Uma Maheswarar temple. This is bigger than the Nataraja at Chidambaram. 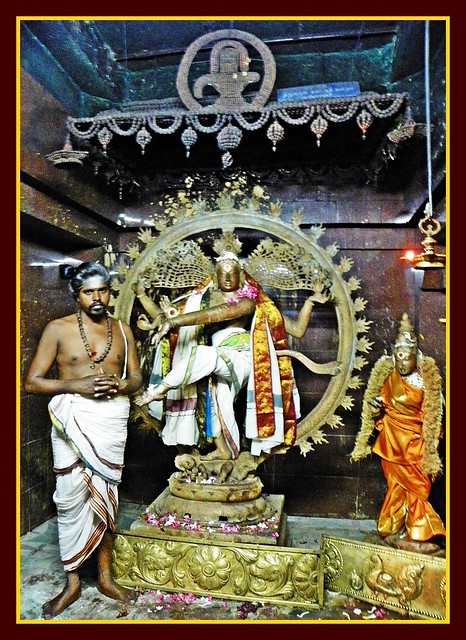 Priest Gnanaskandan next to the idols of Nataraja and Mangalanayagi

Ancient inscriptions record that the temple was built from an endowment set up by the Chola queen Sembiyan Mahadevi [also spelt Chembiyan Maa Devi] in the reign of Uttama Chola.

The unpretentious entrance to the temple is simple and devoid of the typical Gopuram towers. Who would believe what priceless treasures are housed within! 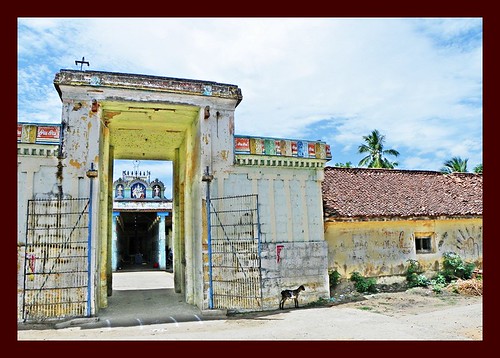 Daily Annadanam or feeding of the poor is held in the main hall [Pugazhabharana Mandapam] of the temple. 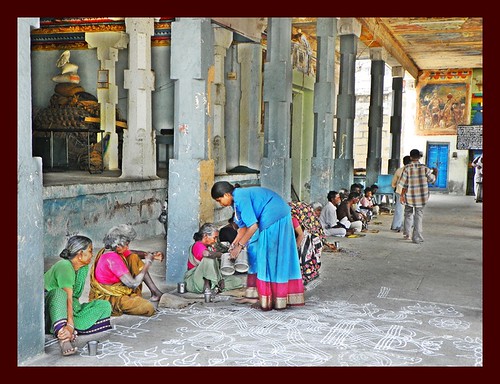 Sri Gnanaskandan is the hereditary priest in charge. He is a friendly soul, enthusiastic about showing off his temple to those who are interested. Here he is in front of the Sivalingam. 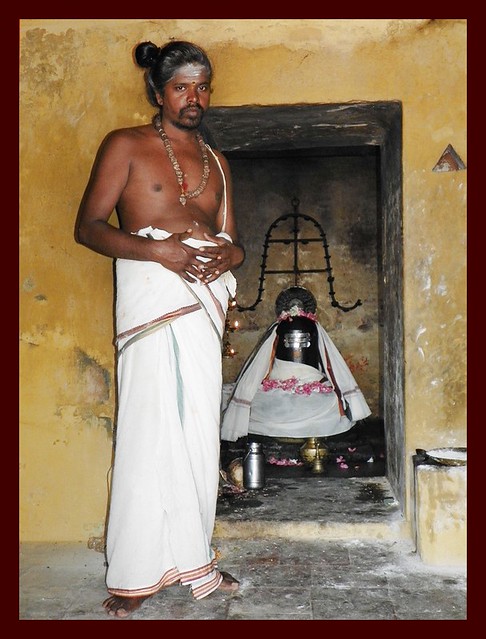 The big Nataraja is housed in a separate enclosure constructed in such a way that the idol can never be removed without breaking the structure. 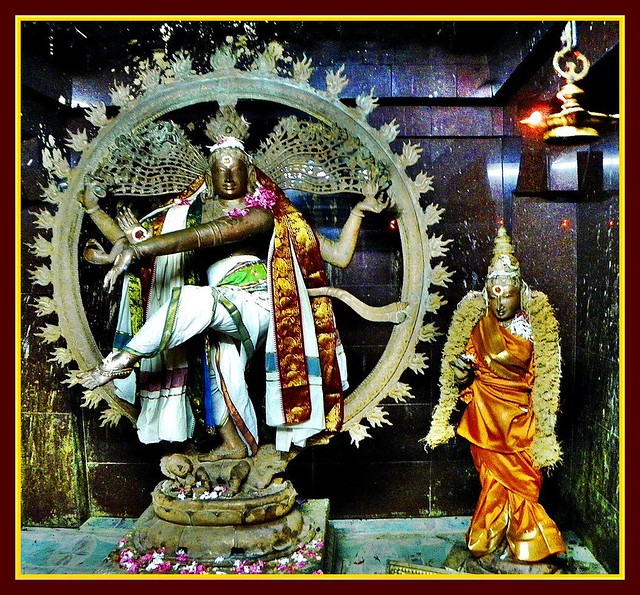 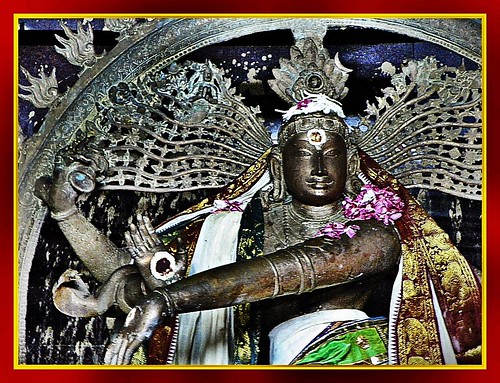 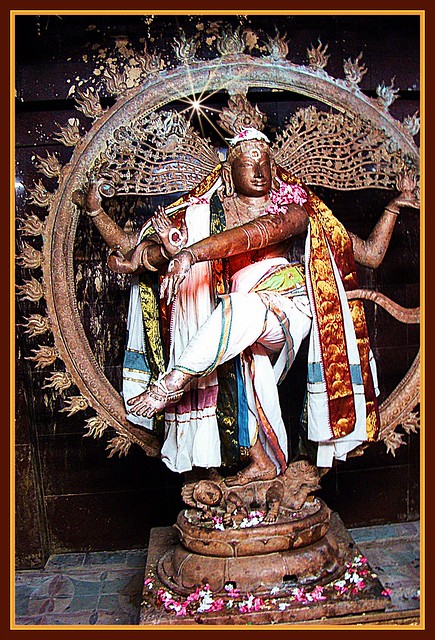 Bronze icons were made in the lost wax or cire perdue process in the Chola era. The tradition continues to this day at nearby Nachiar Koil and Swamimalai where a number of bronze and brass works turn out a variety of finely crafted, exquisite idols, lamps and other objects. The state government owned Poompuhar also has a workshop in both these locations.

Gnanaskandan proudly led us into a small ante room off the Nataraja enclosure where a smaller collection of castings of various deities were displayed. All these bronzes reportedly date prior to the tenth century. 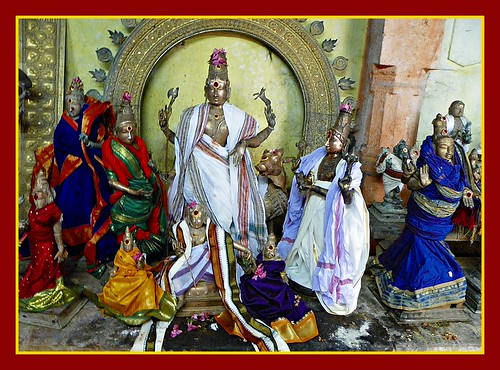 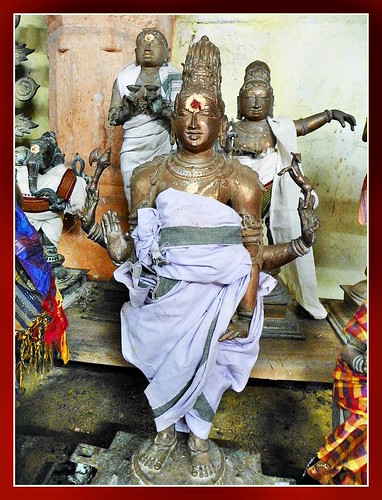 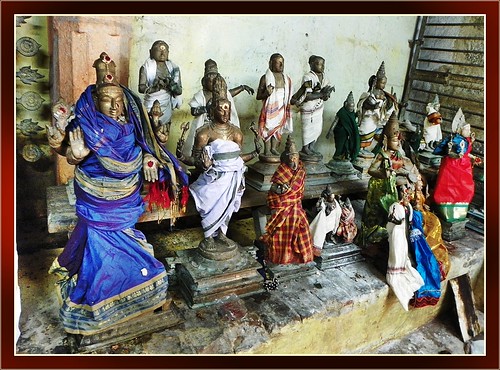 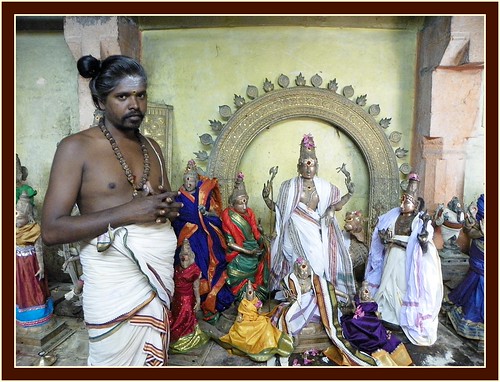 The Nataraja remains where it is but the smaller idols are taken out on ceremonial occassions.

Here is Gnanaskandan with a niche sculpture of Agasthya Rishi 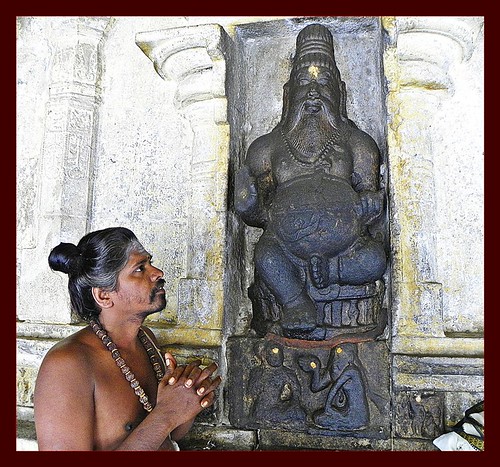 Queen Sembiyan Mahadevi in prayer before the Lingam. Observe the inscription below the frieze. 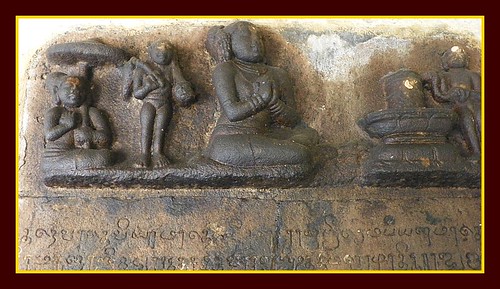 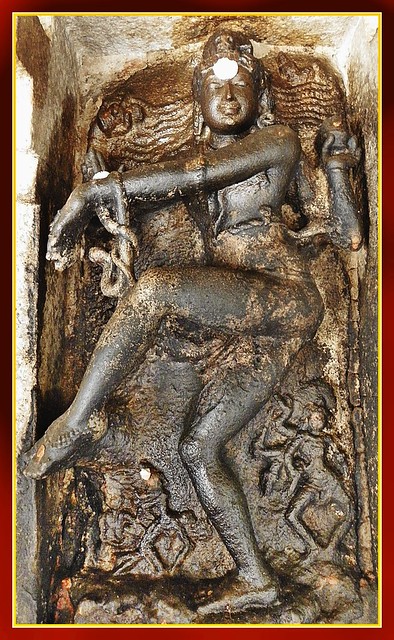 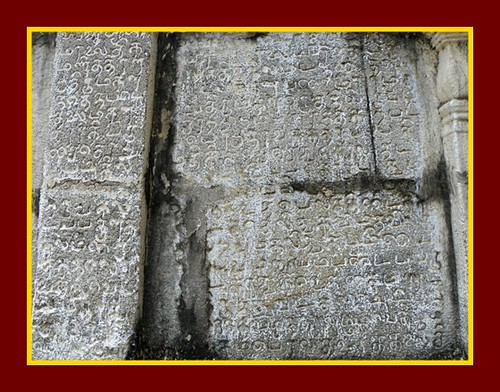 The Konerirajpuram temple is also well known for its beautiful frescoes. Sadly most are not well preserved with obvious signs of deterioration.

These are on the roof of the main hall 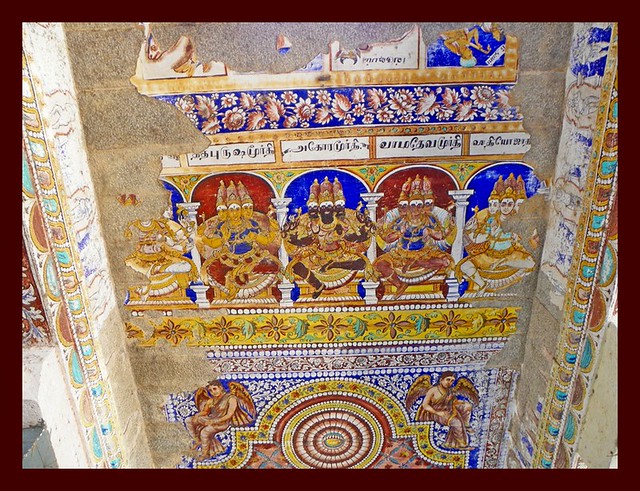 Some of the frescoes from the later Nayaka period are painted over the earlier frescoes. This one depicts a scene from daily life 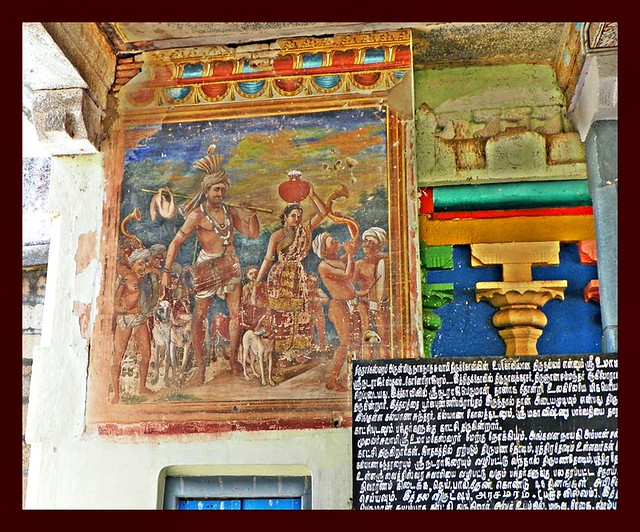 Damaged frescoes on the roof of the main hall. The temple lamp is also seen in this picture, along with bikes casually parked amidst these priceless treasures …. 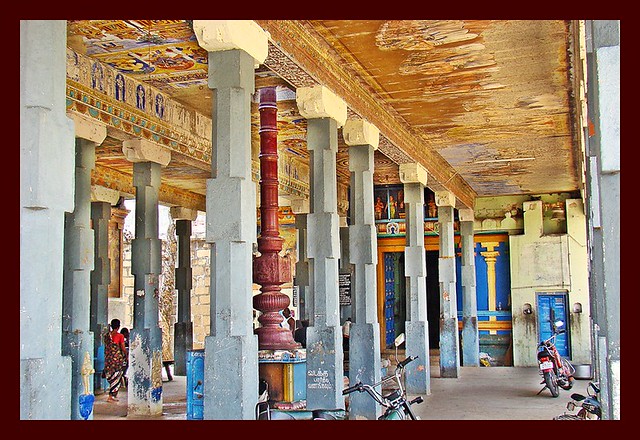 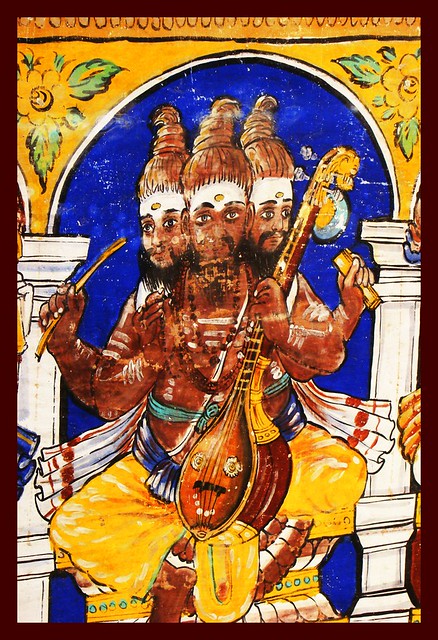 This is an interesting depiction of the British official making an offering to the temple in gratitude for being cured of leprosy. 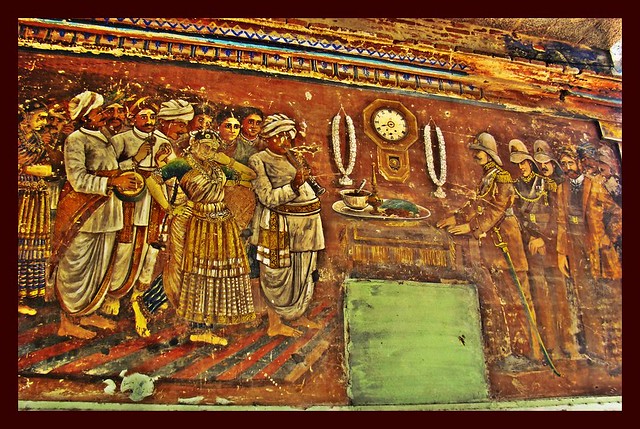 The Vaidyanathar sannidhi within the temple is locally well known as a healing centre for those afflicted with skin disease.

A small Gopuram within the courtyard 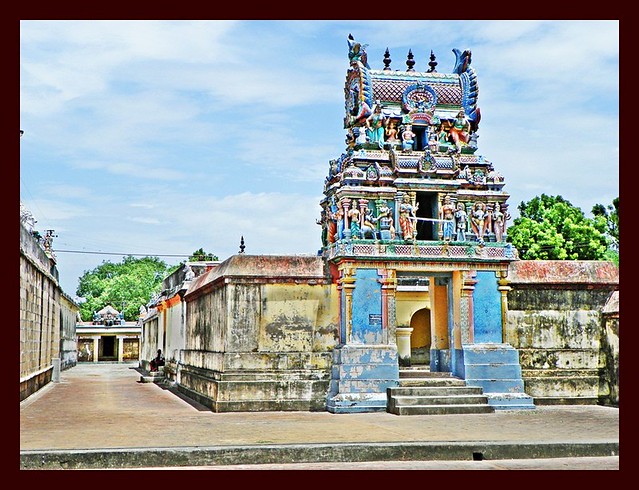 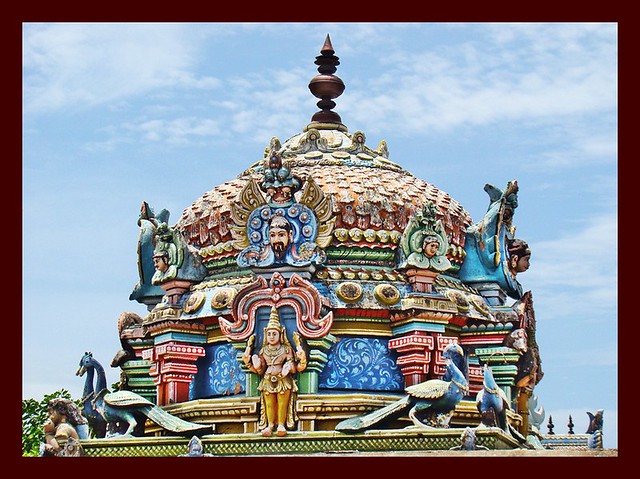 This was our second visit to Konerirajapuram. We had first read about it in Temples of Tamil Nadu by AV Shankaranarayana Rao. The village and the temple exude an ambience of centuries gone by, subtly urging one to return.

The Cauvery Delta is steeped in history and strewn with innumerable ancient living temples containing priceless works of art. On both visits, we stayed at Kumbakonam from where Konerirajapuram is a mere 25 minute drive on the Karaikal route.

Kumbakonam is well known as a pilgrimage centre, in particular for those on the Navagraha circuit. Once in every twelve years, the Mahamaham Kumbh is held around the tank of the same name, attracting millions of pilgrims from far and wide. Kumbakonam is also called Temple City with literally hundreds of temples of its own, most of them ancient. The big two are the Kumbeswarar Siva Temple and Sarangapani Vishnu Temple. Swamimalai, one of the six abodes of Lord Murugan is a mere 6 km away. The World Heritage Site of Darasuram is just outside the city. The Cauvery Delta is a must visit for those who enjoy ancient living monuments and stepping back in time.

More about our visits to the Cauvery Delta in future posts.

The Big Nataraja of Konerirajapuram was last modified: April 18th, 2020 by Gita AM

Trekking and walking by road is the best thing if you want to feel the naturalness of small places like Harsil. It was cold in the morning but still walk was very pleasant. My kids enjoyed trekking a lot. We reached back our room and taken hot water bath. We went for the breakfast and enquired locals where and what to visit in Harsil.
After taking breakfast we packed lunch and snacks for kids and visited the following travel spots with the help of local villagers. They are:

Dharali which is 3 Kms away from Harsil and easily approachable by road
Mukwas village is 1 Km away from Harsil, is the home of Goddess Gangotri during winters because due to heavy snowfall all the ways towards Gangotri Dham are closed.
Sattal is a 3 kms from Dharali and 7 kms from Harsil. Sattal is a cluster of seven different lakes where you can reach by road or go by trekking. The journey towards Sattal is beautiful and full of picturesque views.