Some of the original plantations of coffee were found to be unviable and abandoned over time. They have since merged with the surrounding forest and that is why wild coffee bushes are often seen in the middle of the jungle. 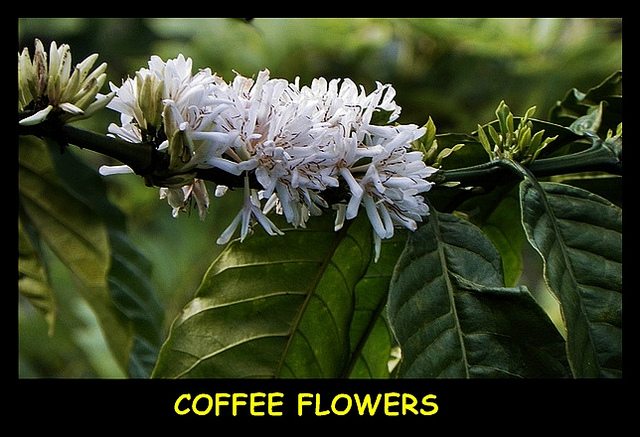 Malabar Giant Squirrels are found in large numbers in these forests though they are easier heard than seen through the dense foliage. A loud staccato clickety-clack means that a Giant Squirrel is up there somewhere!

It is not unusual to find them catching forty winks on a high branch of a tall tree. Why should they not want to indulge in their afternoon snooze like the rest of us lesser mortals?

The picture below was taken in low light without a tripod, is terribly noisy and over cropped. It is here just to show the Rab Ne Bana Di Jodi– in a perfect pose!

As an aside, from personal experience, the best place to see Giant Squirrels close up is in the mountains of Mahabaleshwar in Maharashtra where the forests on top of the plateau are severely stunted and the squirrels are that much closer to the “Line of Sight”. But for now let us return to Valparai.

The few remaining working coffee estates in Valparai are run by Tata Coffee. The production is mostly for the ‘instant’ market. Unlike in the rest of the state, it is very hard to get a decent cup of coffee to drink in any Valparai establishment. I am a very finicky coffee drinker and in all our lengthy stays, have yet to get a good cup of kaapi here. So following the ‘when in Rome’ principle, we stick to drinking tea in this tea town.

The people we met at the coffee estates were wonderful folk; all tea drinkers incidentally.

The coffee ladies in the picture above, hospitably invited us to share their lunch.

These workers are spreading deseeded coffee berries as fresh manure in the estate. What a good idea and it avoids wastage too. 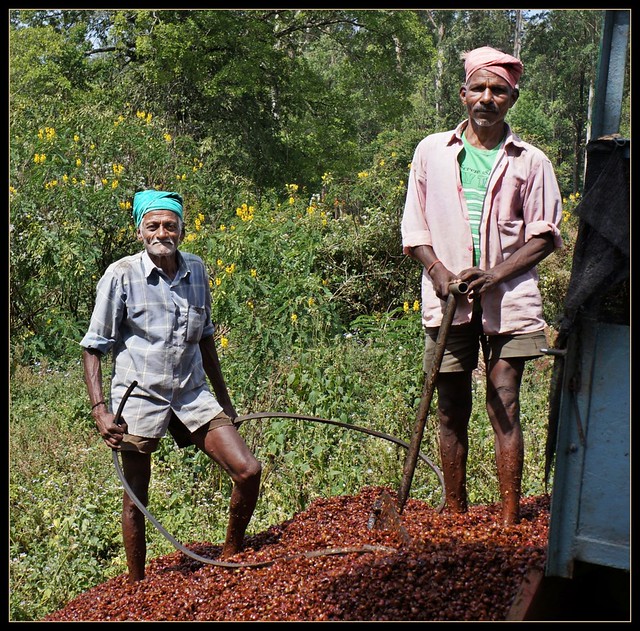 The coffee estates still retain some of the original rainforest trees which play host to a variety of species such as the Great Indian Hornbill (also known as the Great Pied Hornbill – Buceros bicornis). Though the numbers are diminishing, Valparai remains a known site where these magnificent birds can still be found . And seen, with a small dose of luck. We have been very lucky on all our visits.

Nilgiri Langurs can also be found in tall trees in the coffee estates. Nilgiri langurs are shy creatures unlike their better known Lion Tailed Monkey cousins.

Valparai is a bird watchers paradise even without the Hornbills. Those who are patient and willing to endure a crick in the neck, will be amply rewarded with a good variety of sightings. Here is a small sampling:

Wildflowers are abundant wherever light permeates. As with house plants, it is simply a case of more light – more flowers, so colourful masses of flowers are usually found in profusion by the roadside or at the forest edge.

I should have used the term wild ‘Flora’ instead of just ‘Flowers’. Ferns abound as well, some quite rare such as this Giant Fern below.

It is not uncommon to find a gallery of different fern species by the roadside, just like a natural botanical garden! 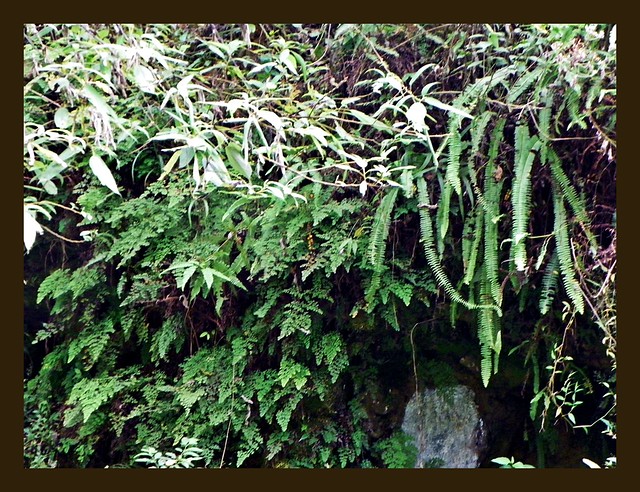 The Western Ghats are indeed a botanist’s delight. Flora found at higher altitudes of the W. Ghats have a strong affinity to that found at similar elevations of the Himalayas.

Such as these wild raspberries, locally called Raktha Pazham – ‘blood fruit’ for the dark red juice. The ripe berries we tried were sweet and refreshing.

The British era saw the most meticulous documentation of India’s natural resources. Sir Joseph Dalton Hooker’s The Flora Of British India first published in 1897, remains a benchmark reference even today along with several tomes penned by his fellow botanists.

Leeches have rightly been described as the forests first line of defence! Leeches here are not confined to the forest, they are found anywhere and everywhere, wherever the soil is damp – which is for the most part of the year. Valparai is leech infested … Uggghhh is all I can say – from personal experience.

The estate workers in Valparai have a very simple method to combat the leeches. Crush a few dry tobacco leaves and infuse in a bottle of coconut oil. Add a dollop of salt for added efficacy. Generously smear the mixture on your feet and legs. The effect lasts all day. We have tried this and it certainly works, though it is not the most fragrant of potions as one may well imagine. 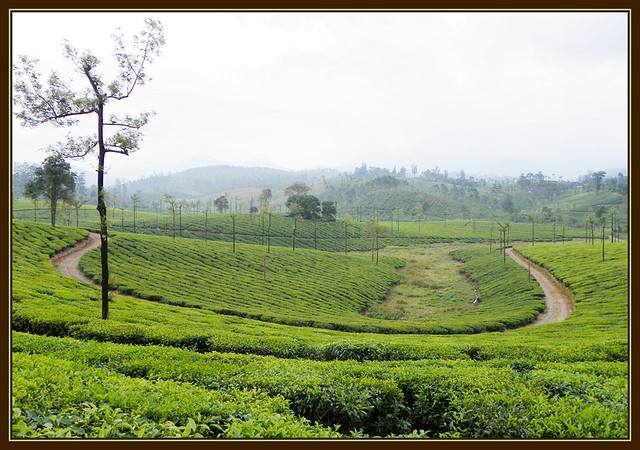 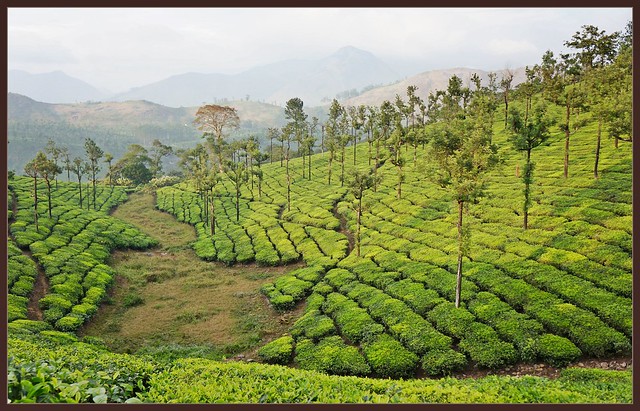 Sometimes you never know just who you might find there!

It could be just a gentle deer 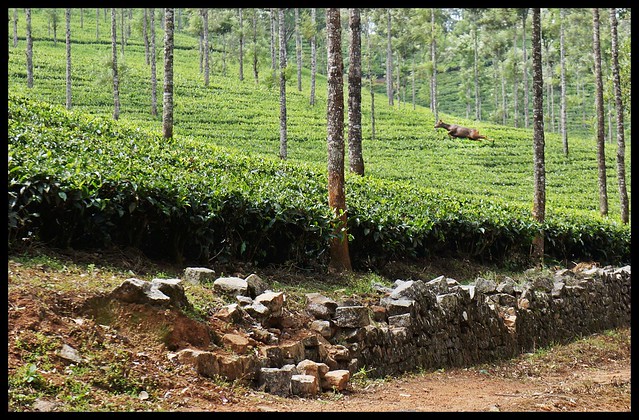 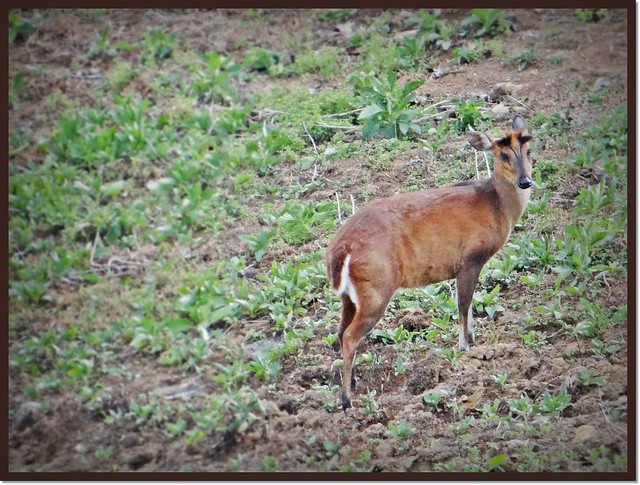 Or a VERY BIG BISON 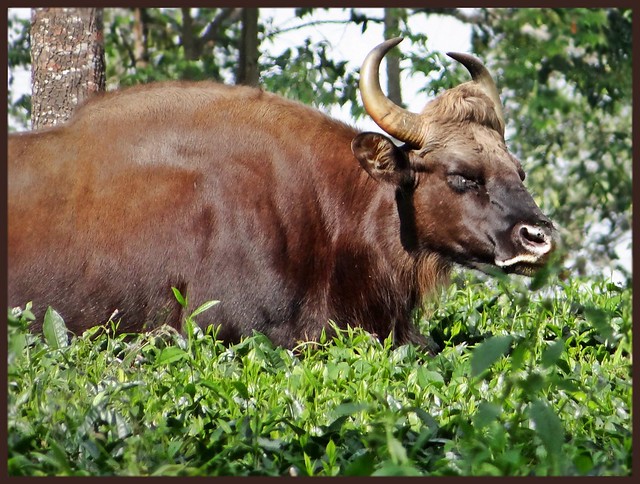 On a lazy afternoon while meandering through tea paths, we came across this amazing “Sleeping Beauty”, blissfully ensconced in a tea bush. 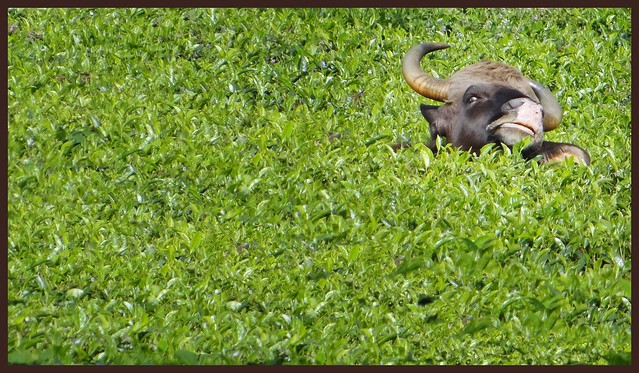 Sweet dreams are indeed made of this ..

Though elephantine in appearance, the Valparai bisons (Indian Gaur) are usually mild creatures who mind their own business. But which fool would proceed further ‘where angels fear to tread’? After taking our fair share of pics, we did an about turn.

Sometimes the wildlife comes out on the main road, much to their detriment. Wildlife killings by overspeeding F1 drivers is unfortunately all too common despite the many caution signs. This huge deer was standing barely 1 foot away at twilight. I realised he was next to me only when some bikers stopped to stare.

Bisons crossing the road, this pic from an earlier visit

The bulk of Valparai’s population consists of estate workers. By and large, they are simple rural folk without the street smartness characteristic of city dwellers. Wherever we met them during our walks, they were eager to chat and were curious about our lives in the big city of Mumbai that seemed light years removed from their little tea town. Entire families are employed on the estate, grandma and grandpa included. When the older generation retire, they continue to live in the same quarters on the same estate with their children. Nowadays, the educated younger generation seek jobs in the cities. I believe I mentioned this in my earlier post. 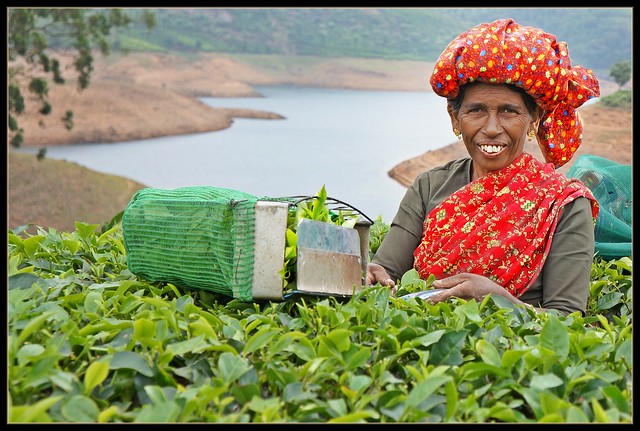 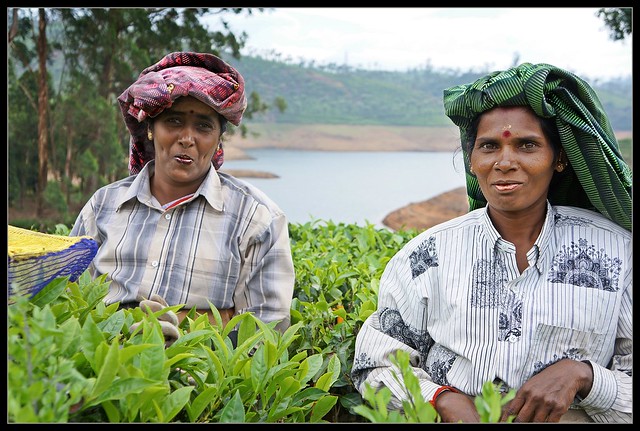 The gentle lady in the picture below is a tea picker at Tata Tea’s Uralikal estate. 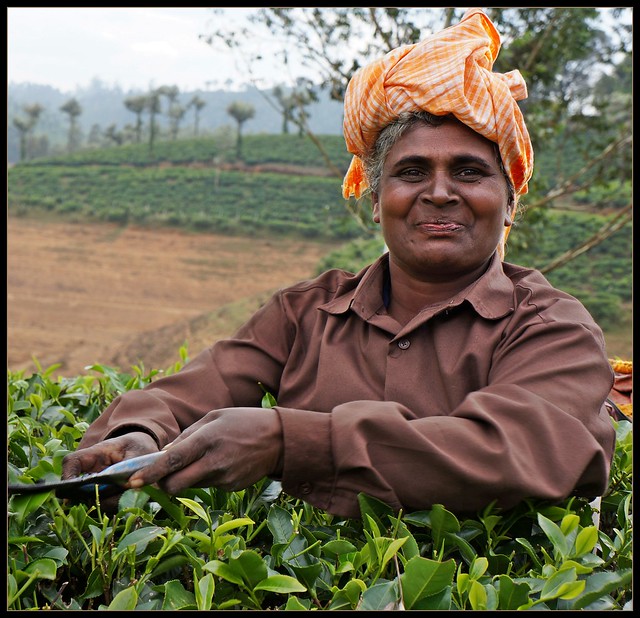 On our previous visit here, we had met her husband, a retired bus conductor who now engages himself in Bible study. There was no one else there at the time and he very kindly showed us how to get to an island in the Sholayar Lake. Some time later, he came around just to check that we were not lost. Such a nice man.