Next morning we left the Sai Ashram and reached the bus stand to board Shingnapur bound bus for our next leg of journey. Besides the buses, shared taxis (Tata Sumo, Tata Ace…etc) are also available from Shirdi for Shani Shingnapur at regular intervals. It is convenient if you are in a group, in that case you can book the complete vehicle. Generally, vehicles do not move until all the seats are full. Shani Shingnapur is about 75 km from Shirdi and it takes close to two hours to reach Shani Shingnapur from Shirdi.

It needs at least 5-6 hours to complete the darshan and return to Shirdi. The road connecting Shirdi and Shani Shingnapur was in good condition and it passes through many villages. As we were approaching Shani Shingnapur, we saw many people selling fresh sugar cane juice. They were using oxen to extract cane juice. These were not few but in dozens. It is worth stopping by and one can have a glass of fresh cane juice. We desire to stop there but as we were in a bus so no break was possible. 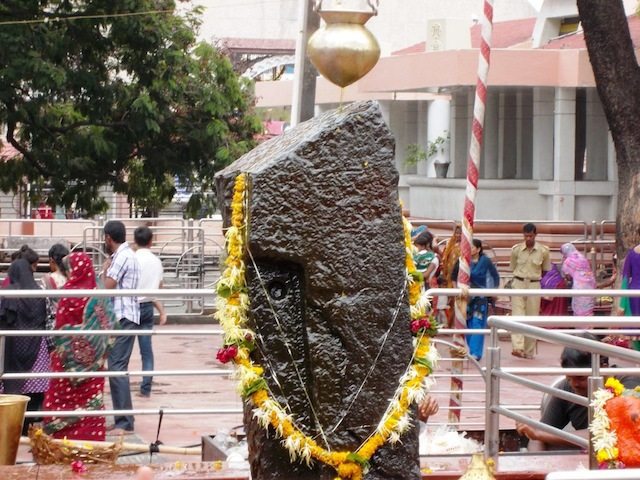 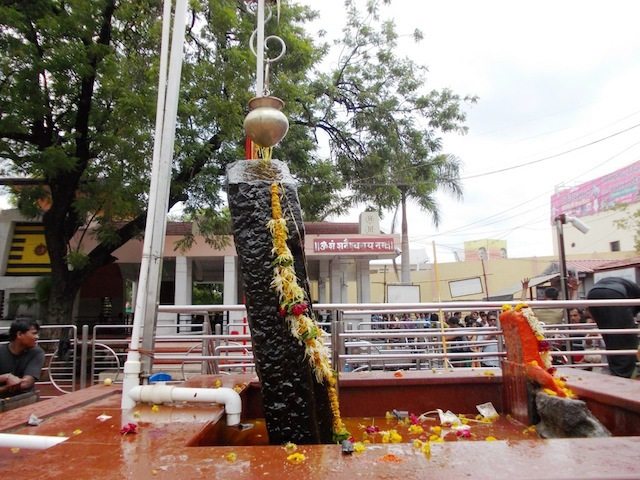 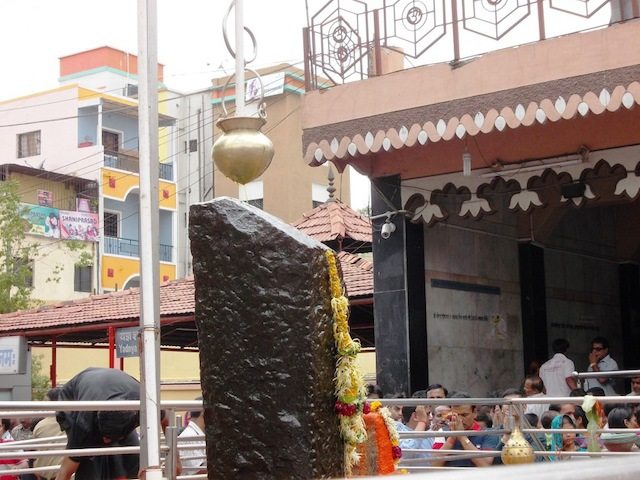 Around 12:30 PM we reached Shani Shingnapur.  The temple is on the left side of the road and parking and shops are on right side of the road. I have drawn a sketch of the location for readers so that they can understand easily. 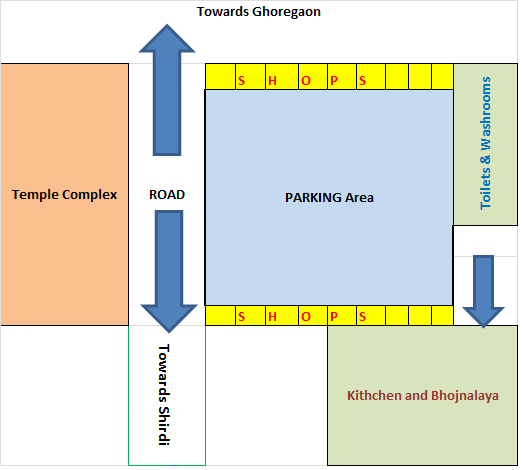 A rough sketch of the temple

We purchased the prashad from one shop and kept our bags and shoes in that shop. All shopkeepers offer free locker service for your belongings, in turn you have to purchase parshad items from their shop. Without wasting any time we rushed towards temple. There was no rush in the temple but only a few people. People were pouring mustard oil into the big containers. Through pipes and motor this oils is taken and continuously poured on Shani Shila. 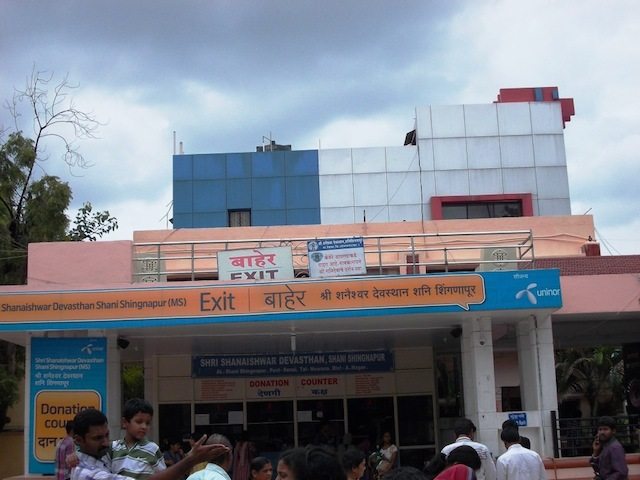 Entrance and exit of Devsthan

Shani Dev is present here in the form of a black slab and there is no roof above it. It is placed on a platform under open sky and that’s what makes it different from other Shani temples. One of the legends has it that the slab came here during a flood and got stuck in a tree. When some villagers tried to remove it, blood drops started coming out of the slab. On that night Shani Dev appeared in dream of a villager and asked him that he had decided to stay there only so they decided to install it where it stood today. 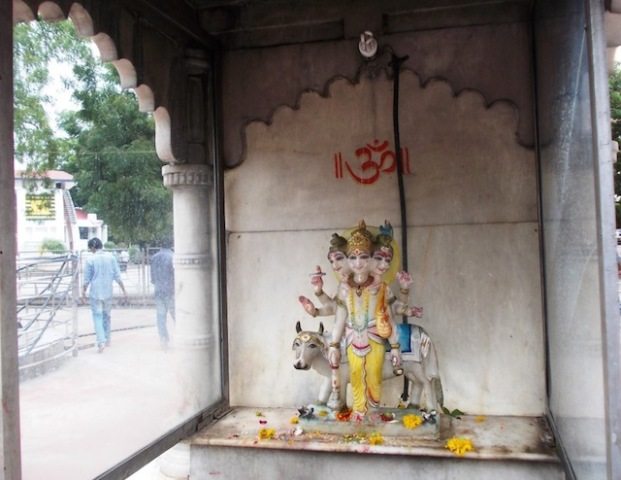 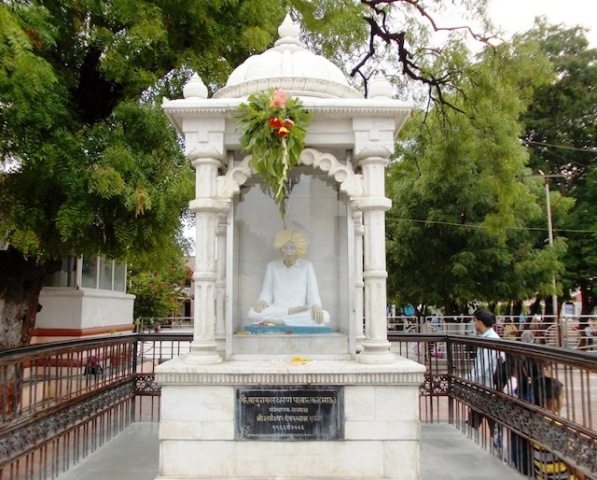 Without a temple and a priest, the inborn idol of Shri Shaneshwar build in 5’9” by 1’9” height black color stone is worshipped by thousands every day. Unlike other pilgrimage center, devotees can perform puja or Abhishek or any other religious rituals themselves. Here the idol stands on a platform of three feet height under the open sky.

He is standing here for the years together in all the seasons of rains, winter and summer without any shelter on the top of his head. The people tried to construct a canopy on the top but all in vain. It is living awake place but no temple. To the north of this idol, there has been an old Neem tree. If a branch of it grows and cast a shadow over the idol at noon, the branch automatically falls down. The shadow does not fall on the idol. 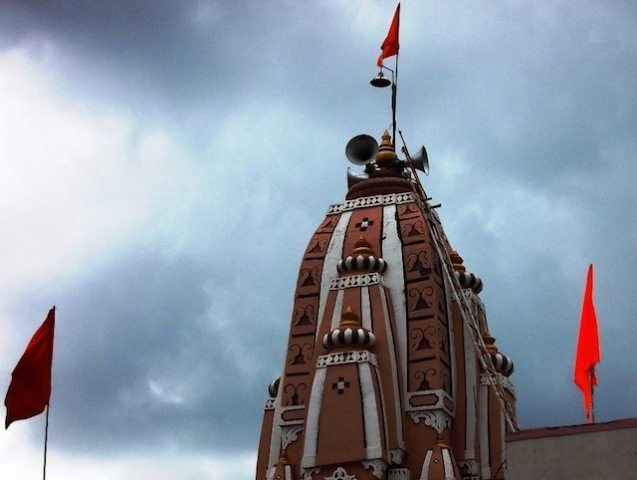 Lord Shani Dev is considered as the God of justice. He is the God who decides the fate of human beings based on the work they do in their lives.  In a horoscope where Lord Shani is sitting in a ‘Pratikool place’, that person encounters various troubles all his life. Shani is represented as having a dark complexion and is said to be the son of Surya, the Sun god. 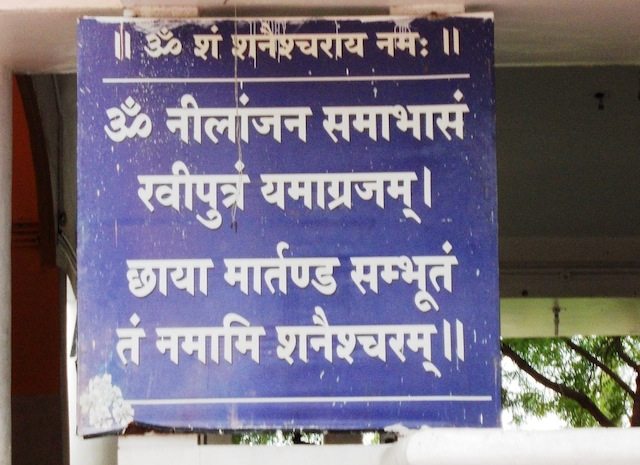 In Shingnapur no house has a door frame or a lock to safe guard, no shop has any door or lock in cash box. . It is believed that Lord Shani Dev keeps their belongings safe and secure. To protect the house and shops from dogs and stray animals, the people just put up the curtains or a bamboo partition. 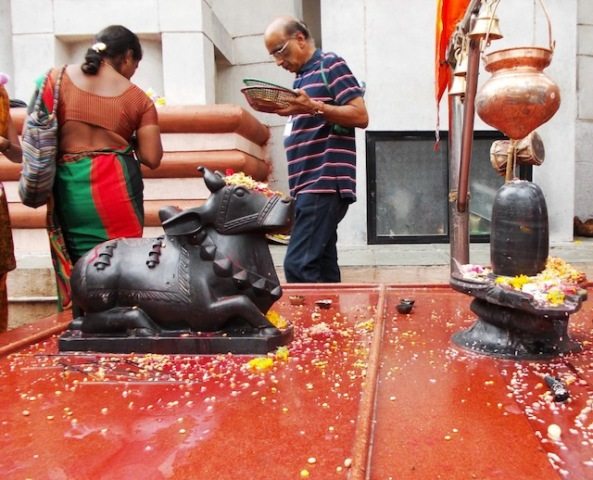 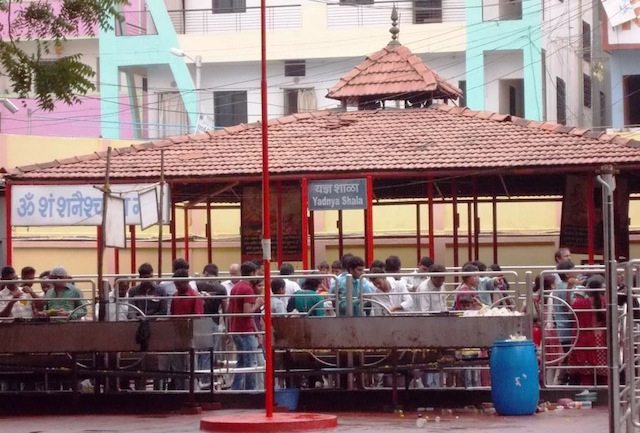 The presiding deity of Shingnapur Sri Shaneshwara Graha Devatha is worshipped with utmost reverence and devotion by multitudes of people from all over the world, irrespective of colour, caste, creed and religion.

The‘devasthan’ is open for 24 hours. Upon entering here, for guidance, the welcome room (reception) is available. Staying arrangements for devotees can be made at the office. Rooms are available on first floor upon shops. The cost of a cleaned room of 3 beds for 24 hours is Rs. 100. In the general room, if you have your own bedding then it is free. Otherwise, a sum of Rs. 10/- for mattress and Rs. 5 for the blanket is charged.

There is also a canteen known as ‘Prasadalaya’ run by the Shri Shaneshwar Devasthan trust. The ‘Prasadalaya’ is very neat and clean and offer hygienic foods to pilgrims. Foods are available in the morning from 10.30 to 3.00 and in the evening from 6.00 to 9.00 PM. Coupons are issued at reasonable price (Rs.15 or 20/-per head). We also took lunch there and were impressed by the arrangement. Dining hall is very big and more than one thousand people can dine together. We were served dal, rice, chapatti, vegetable and halva in lunch. 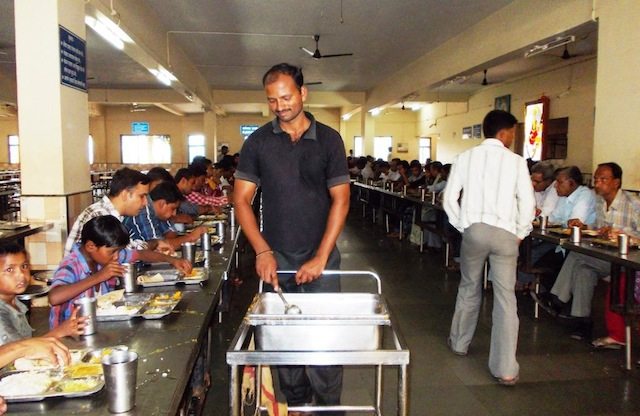 There is an arrangement, for men only, for the purpose of bathing and dressing in wet clothes to have the ‘darshan’ of the deity, and women can get a ‘darshan’ from the foundation itself. There is very good arrangement for ‘darshan’ but no compulsion about doing any ‘pooja’-‘archana’.One can do Abhishek for minimum of Rs. 11/-. The mass ‘Mahaarti’ of God Shani is held early in the morning at 4.30 A.M. and after sunset at 6.30. P.M.

We have a quick darshan as there was no rush; spend some time in temple, bought one book and some parshad for home and went for lunch at Prasadalaya. All these activities were completed in just one hour. 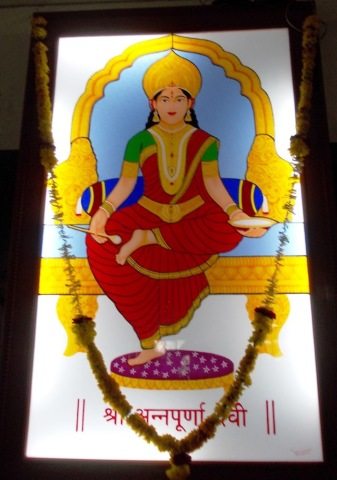 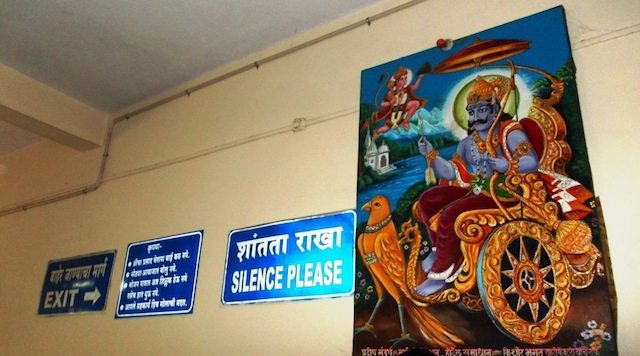 Picture of Shani Dev in Prasadalaya

For the next day, we had a plan of Grishneshwar Jyotirling darshan so after lunch we enquired about the conveyance for Aurangabad. We were told that we can get Aurangabad bound bus from Ghoregaon on Ahmednagar- Aurangabad highway. We hired an auto rickshaw for rs.100 to reach Ghoregaon which is 6KM away from Shingnapur.

By evening we reached Aurangabad and went straight to BSNL guest house which was pre booked for us. After some rest we went for a round in nearby area in Aurangabad. Next day after visiting Grishneshwar Jyotirling, Ellora caves and Daulatabad fort we again return to the Aurangabad. We saw Panchakki and Bibi ka Maqbara, the main attraction of Aurangabad. I have scheduled them for the last post and in next post I will take you to have Darshan of Grishneshwar Jyotirling.

Till then Jai Bhole ki……

Shani Shingnapur : The Humble Abode of Shani Dev, the Lord of Justice was last modified: January 4th, 2022 by Naresh Sehgal

Tribal circuit is one of my best trip I had so far, more than 1000 KM X Chandigarh in 3 nights and 4 days, exploring through the whole of Himachal, passing through two major high altitude passes, exploring the changing vegetation and roving to places where you bound to feel “This is heaven and I am God”. You probably get hypnotized by the nature and feel need of nothing and feel a peace which only god can feel. All worries are left behind, in fact at that height when you look below from the edge of the cliff you will feel like there are my big worries looking so small from here!