The previous installment of this series covered reaching the small city of Interlaken in Switzerland, and the disappointment of not being able to do the cruise on the same day since we were too late. Anyhow, we drowned our sorrows the first day in some drinks and food, and resolved to see what we could do the next day.
Day 2. I got up in the morning, and given that nobody else seemed to be up, I got down to taking a few photos from the hotel room (and was trying to be different – so took some photos from the reflection off the huge glass window). I had this huge camera (the Sony DSC R1) that is as big as an SLR and takes some great photos, so did some experimentation; and by then, people were ready to get up. 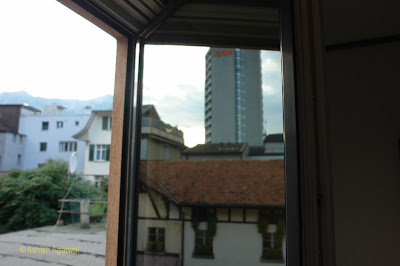 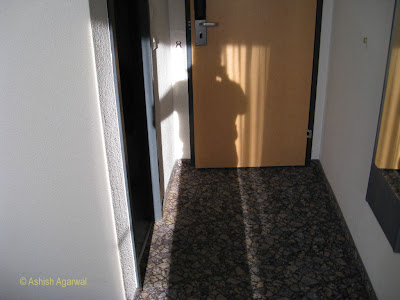 Goofy photo of shadow in morning

By around 9 in the morning, we were all ready to leave for the trip to Jungfrau (also called Jungfraujoch). We set out, lead by yours truly. Asking for directions goes against my ethos, so I confidently claimed that we would go to the Interlaken West station, and from there, would walk along the track to the Interlaken East train station (since the train starts from there).
As expected, this led to my lead position getting cancelled; the route I suggested was no good, and instead we (means the other people with me) asked directions and we were told that either we could take the bus from the West train station, or we could walk all the way (a 20 minute walk). We decided to walk (since we missed the bus) and off we went. It was a beautiful walk, with narrow roads, but mostly empty. There were some hotels alongside, but overall, we saw a beautiful large field (the place where the parasailers would land), and some street-side cafes. A good 20 minutes later, we were there, and joined the group of people waiting over there. For some reason, it was not clear as to where the train from Jungfrau would be available, and we had to ask people (maybe the reason was that the train does not go to Jungfrau, but only to Lauterbrunnen (Wikipedia)). 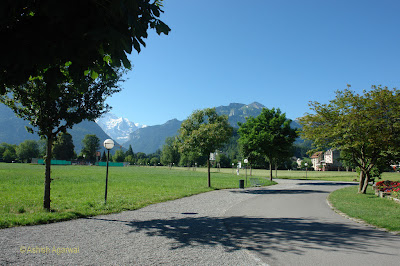 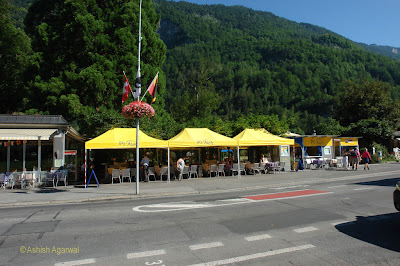 Soon, we got into the train, and starting heading out of Interlaken. The vista soon changed to become even more beautiful, and we started heading into a hilly territory, with a stream running alongside. Some time later, we reached Lauterbrunnen, and changed into another train, a green colored train. Here, there was no doubt, since there were plenty of people heading the same way, and train personnel were also busy guiding people. This train had a better journey, getting into the hills proper, and passing through some terrain with a beautiful view. The flip side was that the train was more cramped, and there was no longer a concept of first class travel. 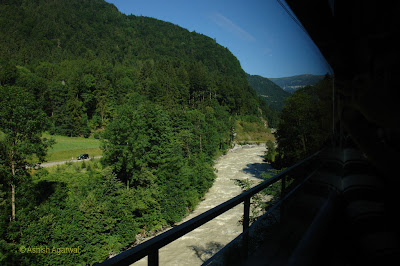 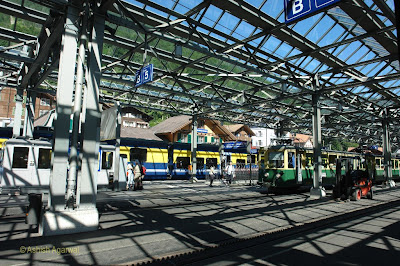 Train Station of Lauterbrunnen where you change trains 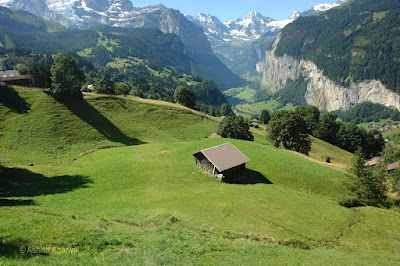 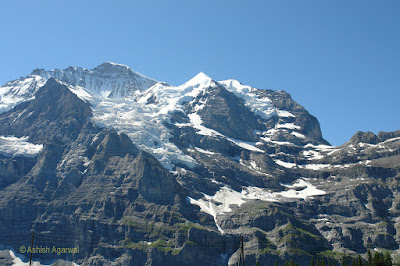 This train finally reaches a station called Kleine Scheidegg (Wikipedia) where we again change trains to climb into a cogwheel red train that will climb through the rocky terrain, through tunnels bored into the mountains and finally arrive at the Jungfraujoch. 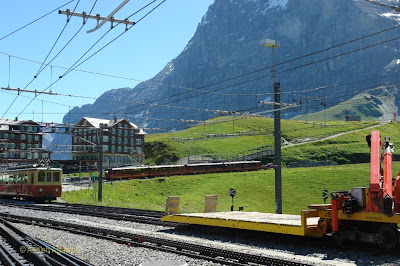 In between, when this train is passing through the mountains, it also stops at 2 stations called Eigerwand and Eismeer where you can get a great view of the mountains and the snow and ice glaciers (there are also rest rooms at both these locations if you so need them). And then, after 3 different trains, and a fairly long, but exciting journey, you finally reach Jungfrau.
The next post (this one became longer than I expected) will cover what all is available at Jungfrau, as well as the return journey.

When you unexpectedly get a financial windfall or time off, a holiday is always a good idea. Late deals are cheaper outside the school holidays, but click here to find out more.

Trip to Switzerland: Part 2 – Interlaken and trip to Jungfrau was last modified: August 15th, 2019 by Ashish

In our case, we approached Czech Embassy for the visa, since we were to spend maximum period (about 6 days) there.

Schengen Visa regime has also altered the procedure for entry into EU zone. For instance, since we took a FINNAIR flight, we changed flight at Helsinki. Now, after landing at Helsinki Airport, we shifted into ‘EU Zone’ part of the terminal. So, it was here in Helsinki that we underwent immigration/custom checks. Thereafter, once in EU part, all flights within EU were like domestic flights, despite flying from one country to the next.