One of our destinations in Ajmer city was Soni Ji ki Nasiyan. That was very close to Akbar’s fort and was situated on the present day Prithvi Raj Road, Ajmer. It took us hardly five minutes from the Akbar’s Fort to reach there. After parking the car on the side of the road, we entered the building through the side gate, which was open to public for viewing the gold-plated Ayodhya Nagri. 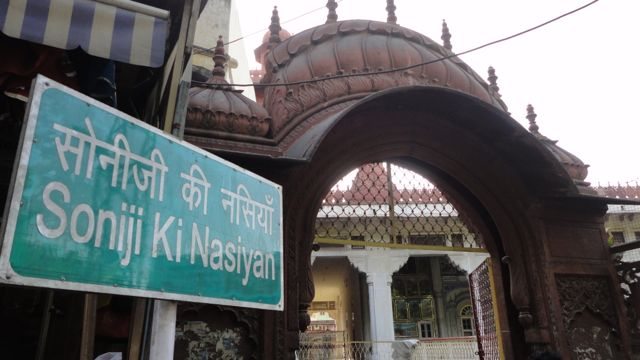 Soni ji ki Nasiyan is basically a Jain temple, belonging to the Digambar Sect. Rishabhdev, the first Tirthankars, was the reigning deity there. After the fall of Mughal empire in 1857, a Jain businessman in Ajmer started its construction in 1864. His name was Raibahadur Mulchand Nemichand Soni. The title “Raibahadur” is enough to understand that the said businessman was also enjoying the patronage of the British Government.

Architecture of the hall clearly reflected the influence of Anglo-Rajputana style. The use of coloured glasses and the design of doors with arches were British in my opinion. Since, the main hall of the temple was closed so we could not see the idol of the presiding deity. Moreover, the entry to the main hall was also barricaded with a yellow painted steel grill. To the right side of the barricade, there was a staircase for climbing up to the second floor to see the story and teachings of Rishabhdev in physical and symbolic forms.

The hall of the temple

On the second floor, we reached to a beautifully designed corridor. However, the corridor was made dirty due to misuse and by people, who try to immortalize themselves by writing something on the heritage monuments. But from the windows in the corridor, one could see the very beautiful craftsmanship of the Ayodhya nagri and the incidents of the life of Rishabhdev. The entire hall is full of beautiful models of different aspects of the life and teaching of Rishabhdev. The story is about establishing the Ayodhya nagri in Jambudweepa by Lord Indra, when all other worlds were destroyed. In this Ayodhya nagri, Rishabhdev was born. 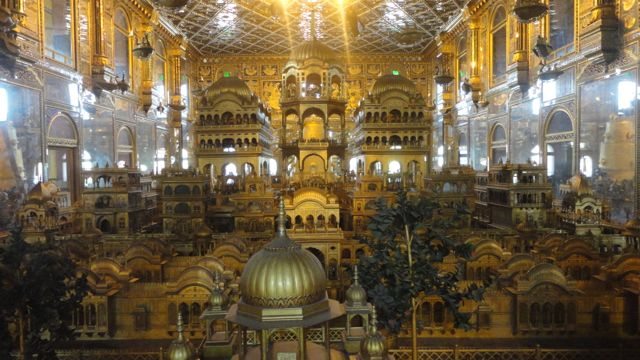 The Jains literature tells us about the 16 auspicious dreams seen by the mother of Rishabhdev, before the birth of her most exalted son. His birth was very auspicious to his parents and people at large. His abhishek ceremony was held at the Sumeru Mountain. The Gods showered flowers and Kuber showered many riches during the Abhishek ceremony of Rishabhdev. 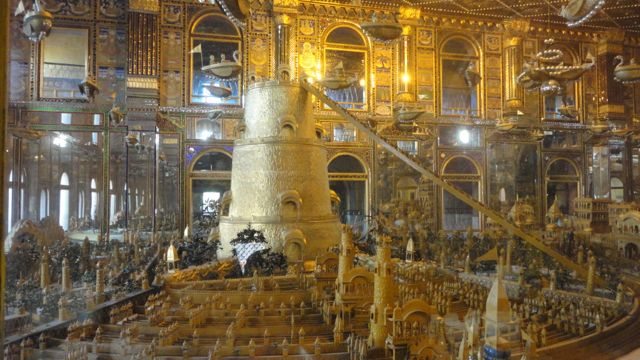 One day, Rishabhdev was watching a dance of Nilanjana (Apsara, the female spirit). During the dance itself, Nilanjana, the apsara died as her life time got over. Rishabhdev, then realized the knowledge, renounced the world and went for the Tapasya. After the tapasya, he got the ‘Kavalya gyan” at kailash Parvat.

There was a staff erected in the middle of the compound, which is called “Maanstambh”. It is 82 feet high. It was added by the Soni Family in 1953, ie., after independence. Red sandstone is extensively used in the construction of that temple. This gives the name “red temple”. The Jains call that temple as “Shree Siddhkoot Chaityalaya”. 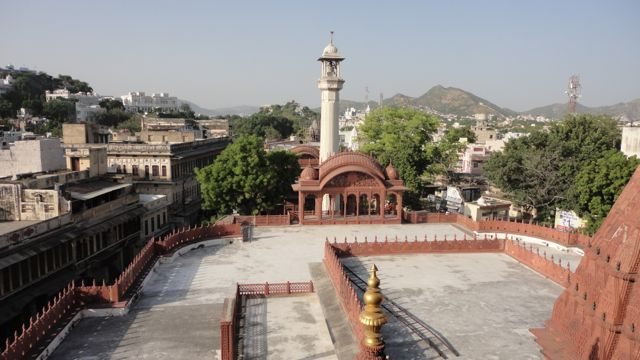 This Ayodhya nagri was very beautiful. Entire model was gold plated. It had taken about 25 years to build the model. It is mentioned in the temple literature that a huge celebration was organized at the temple in 1895, when it got completed. Even the ceiling of the hall was glittering as gold. I stood there spellbound and started visualizing the events in the history. The temple told me in silent voice that…. “O traveller! In 1192 AD, when Prithvi Raj Chauhan was defeated, the earliest Jain Temple of Ajmer was converted into a mosque. You can see it at the site of present-day “Adhai-din-ka-jhopra. However, the spirit and teachings of Lord Mahavir could not be broken. When the time was appropriate, a new temple was constructed, which was better than the earlier one.” I understood the emotional turmoils of the era gone by and said in a feeble voice……..“O beautiful temple! Every era has something to show and something to prove. But whoever thought of you, must be a very articulate man with keen sense of beauty. I wish your beauty remains intact for many more centuries to come.” 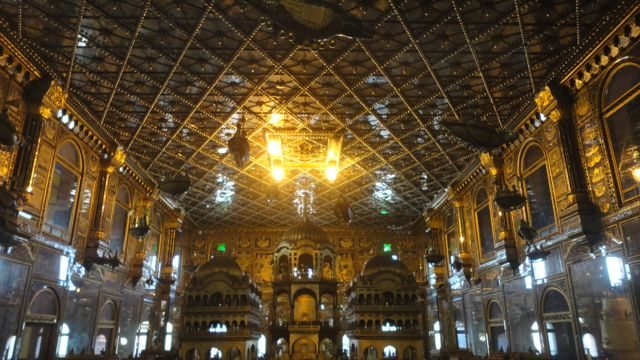 Admiring the beautiful craftsmanship, we came out of the temple and roamed around the area outside its premises. I have written earlier that the Soni Seth was given a title of Rai Bahadur by the British. The building adjoining the Temple was really a great example of the British Architecture. It was named Raghunath Bhawan. It indicated to me that the entire area was under the patronage of British during their reign over this city. 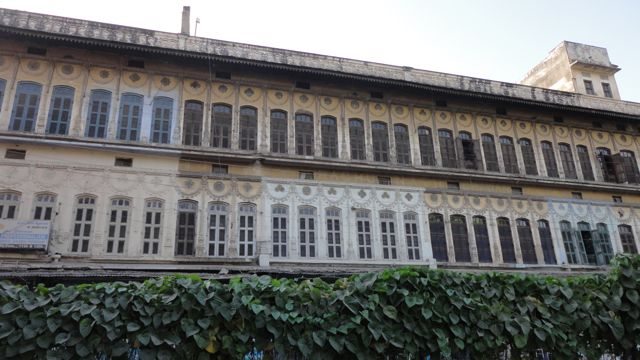 Outside the temple, there was a shop-keeper selling “Banta drink” or “Goli soda” drink. It is quite popular in Delhi. But I did not know how the marble/goli was fixed in the bottle and how the soda drink was made. So, we stopped at his shop and requested the shop-owner to prepare the bottle for us.
I observed that a Banta drink is prepared in three steps. In the first step, the dry ingredients and lemon juice etc. was mixed with the water. That liquid mix was filled in the special bottle upto its neck. 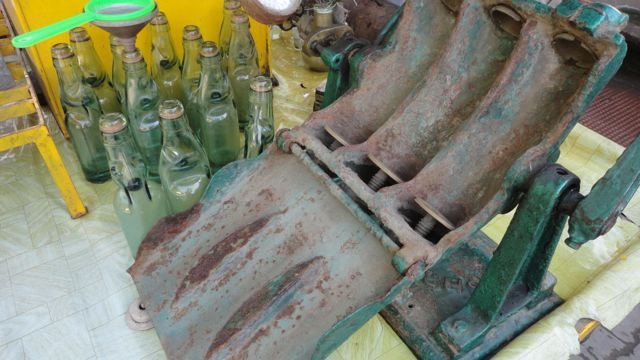 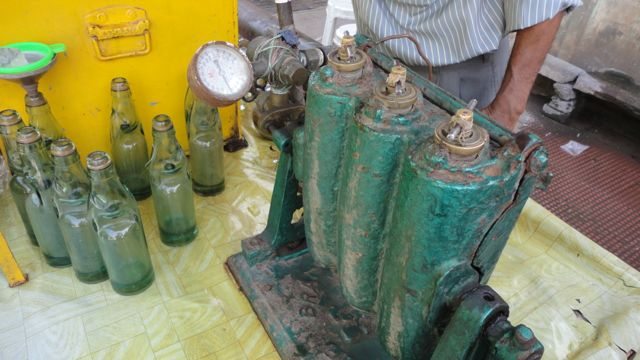 In the third and final step, the soda machine was rotated at least three-four times. The Carbon dioxide formed inside the bottle pushed the goli/marble to the top of the neck, where the goli got stuck. 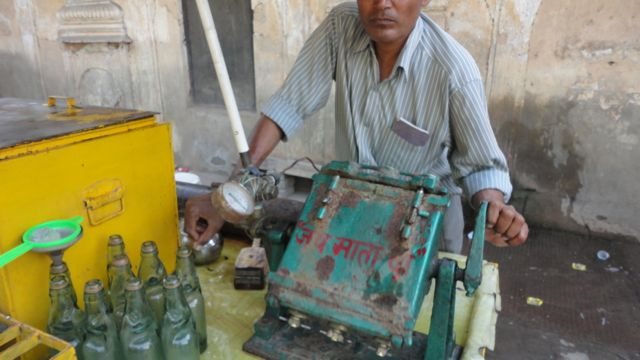 In order to drink, the goli needs to be pushed down in the bottle and the soda-water is taken out in the glass. Somewhere I had read that this system was invented in 1870s and it was in so demand at that time that the British merchants used to import special bottles from England. Anyway, the shop-owner was satisfied to get a curious customer like me. He prepared an excellent soda-water mix. After satisfying ourselves with the drink, we proceeded ahead to our next destination, i.e., “Anasagar lake”.