Blessed with sighting the magnificent shy-creature besides a handshake with Sher Singh, we were profoundly in high spirits. Somnath is not far on wheels, but it took us little more than two hours due to an unusual delay at Talala because of a mob agitating protest after death of two young children of an influential villager in a hit and run incident by a speeding bus. Appreciating part is that, despite in mourn and grief of gross loss of young lives, the affected family members with unbelievable courage, showing generosity and humility, engaged in making way for traffic keep moving. 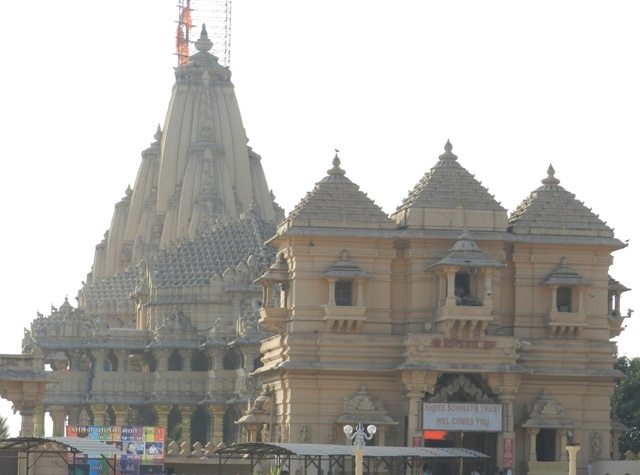 Soon, we reached at my fourth Jyotirling, Somnath. Parking the car a few meters away in a very large space with unorganized parking facility though I hurriedly jogged to have the glance of the magnificent temple about which I have read so much in our history books during school and also in visual media. Soon a right turn left me in awe with eyes wide open to see the magnitude and glamour of the historical and mythological grand shrine at the shores of Arabian Sea, an architectural marvel standing erect in pride.

A large boundary around the shrine, with many visible vigil eyes, armed guards, innumerable CCTV cameras and steel barricading with metal detectors, scanners besides checking physically to every entrant beyond the permissible limit, reminds the history of destructions of the shrine in the past and its prone to vulnerability in the future.

In Hindu mythology, Lord Krishna is believed to have built Somnath temple with Sandalwood. History starts with the materialistic construction of the shrine by the Yadava kings of Vallabhi in Gujarat on the same site in around 649 CE

Demolished by an Arab Governor, Junayad in 725 CE was magnificently re-built with red sandstone by Nagabhata-II, the Gurjara Pratihara king in 815 CE.

In 1024 CE, Mahmud of Ghazni destroyed the shrine again which was rebuilt with wood in joint efforts of King Bhoj of Malwa, Gujjar Paramara and the Solanki king Bhimadev-I between 1026 and 1042 later replaced to a stone structure by Kumarpal.

In 1296 CE, the temple was once again attacked by Allauddin Khilji and rebuilt by Mahipala Deva, king of Saurashtra in 1308 and the Lingam was installed by his son Khengar sometime between 1326 and 1351.

Lastly, in 1701, the temple was attempted to demolish by the brutal Mughal emperor Aurangzeb when his crown fell off while sighting the giant shrine infuriated him and left it half ruined.

Later on a joint effort of Peshwa of Pune, Raja Bhonsle of Nagpur, Chhatrapati Bhonsle of Kolhapur, Queen Ahilyabai Holkar of Indore & Shrimant Patilbuwa Shinde of Gwalior rebuilt the temple in 1783 at a site adjacent to the ruined temple.

The present state of the shrine, depicting glory of past symbolizes efforts of the Iron Man, Sardar Ballabh Bhai Patel and built to its present day magnificence by the government of India, post independence, now a heritage site. 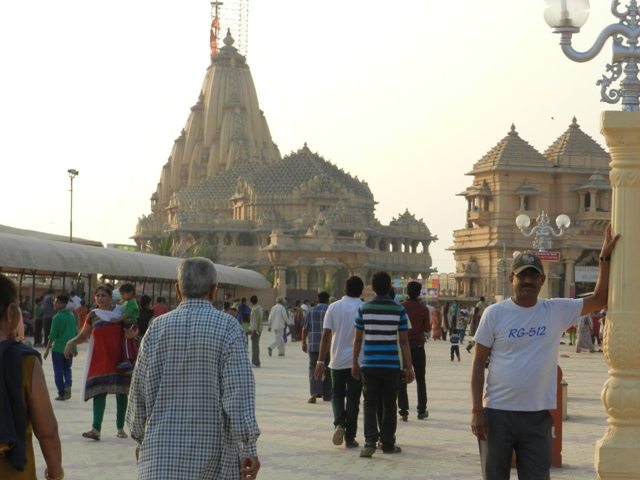 In remembrance of my presence

After so many rise and fall, looted and destroyed, rebuilt and restructured, the shrine is a lesson to learn that nothing is more permanent than tolerance and faith as truth and non-violence prevails. 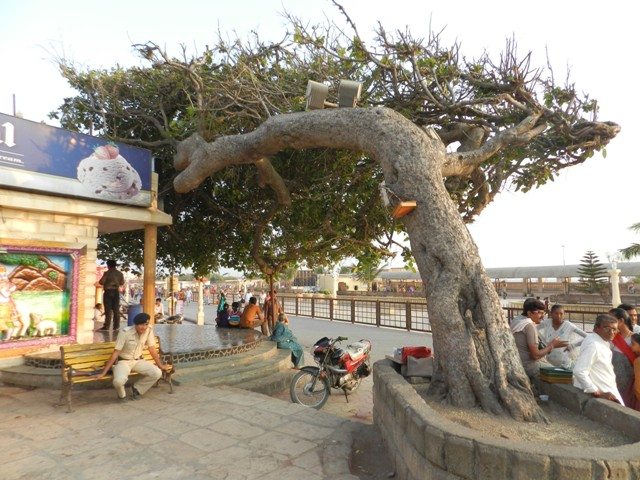 No camera, mobile, inflammables, leather items except your wallet are allowed inside the premise. One place that will make you feel proud and allow you to boast about sanctity, cleanliness, non-interference by agents is Somnath temple. With peace of mind, in a very systematic manner, you can enter into the shrine and pay your obeisance with much devotion. Sighting the pillar of light, Jyotirlingam, is an obvious delight with a divine feeling of enlightenment. A parikrama of the shrine is generally performed by all Hindu, so as a part of the mandatory practice, we did the one too.

The endless view of Arabian Sea touching the temple boundary is where you can sit for hours enjoying the moisture in the saline breeze, hovering water birds, clear blue sky, occasional sight of struggling boats and the deep sea far stretched upto the horizon takes you to a journey far beyond in the eternity. A blend of religious and naturalism is what I can describe with my limited vocabulary and falling in love in spontaneity is what I can guarantee about Somnath. 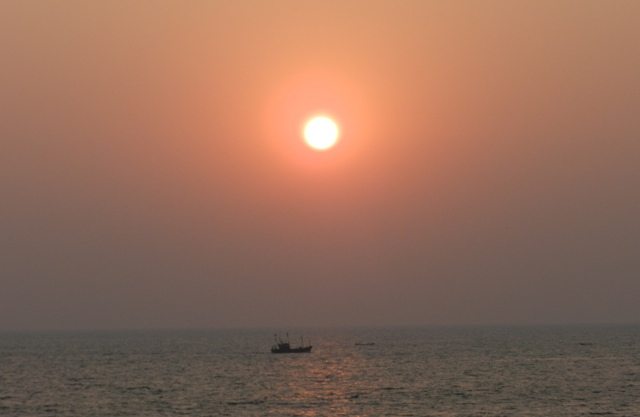 Sailing in search of Enlightenment

We were no exception, sitting long hours, trying to grab the eternal memories and hold it enduringly back home, were lost in infinity. It was almost 3 pm when we realized to fill our stomach to get enough physical strength for retaining the spiritual energy in our soul. There is an arcade with small but good shops in rows systematically built and well kept, outside the temple premise. Also, we needed to find a comfortable stay, as we changed our mind to go Diu same day and wanted to grab more spiritual edification by sparing a night at Somnath. 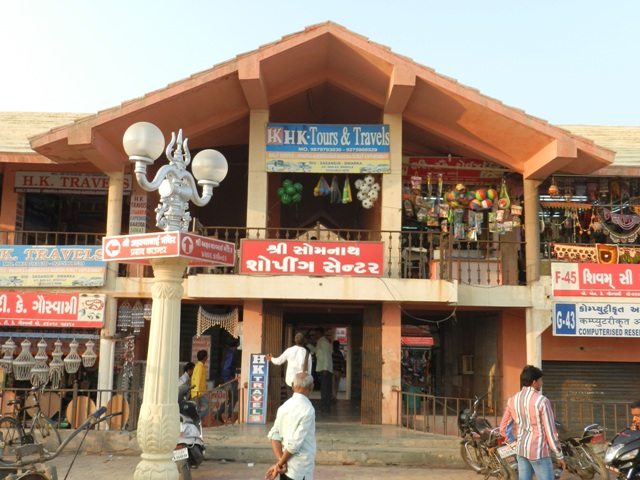 First job first, a sumptuous meal in one of the many food joints then checking in any one of the Guest Houses excellently maintained and managed by the Shree Somnath Trust. Large boards beside the cloak room in the shrine premise describe every detail of all such Guest Houses, which can easily confuse you to choose one from a range of options. Our job was made easy by the information that the Double Bed rooms are not available except in Lilavati. A non-ac room for Rs. 600/- was an excellent deal for a well maintained accommodation, better than any commercial hotel, with all basic facilities. 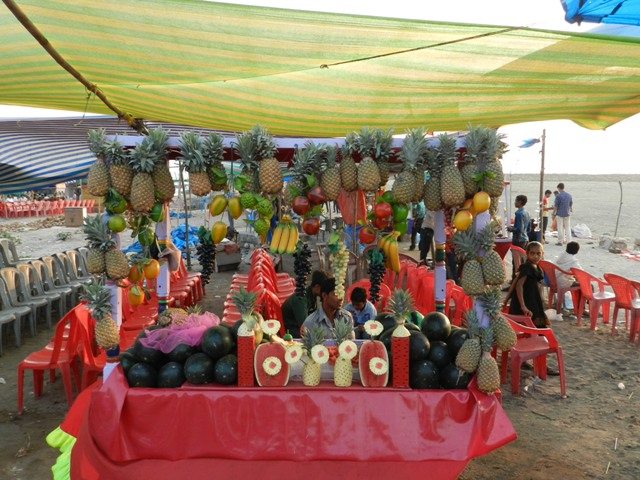 Ready for a Ride 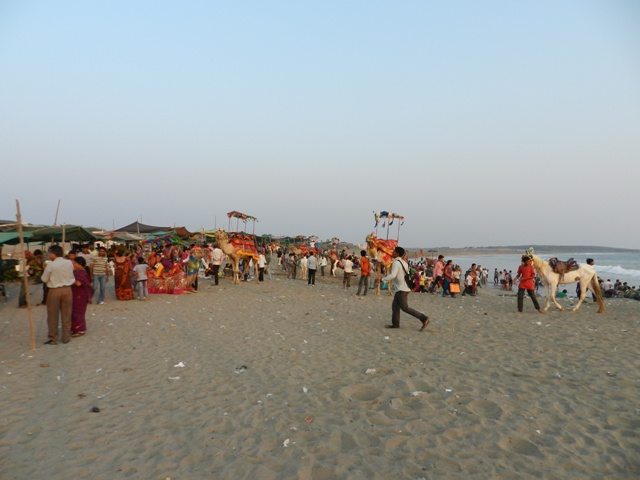 After quick refreshment, we were back on the beaches to enjoy the brilliant sun-set walking through the wet sandy path leading to Choupati. A hawker selling fruits-salad grabbed my attention with beautifully decorated shop by all types of fruits, a pair of camels decorated ornamentally and finally to the turbulent sea which was so calm a few minutes back. A swinging boat sailing amidst the turbulence was playing hide n seek with people watching it from the shores. The daring fishermen enjoy their catch every day deep inside the sea, is not for adventure but a mandatory daily chore and source of income. The sun-set view along with the sea cannot be framed from the beach because a large man made rectangular land mass created for reasons not known, perhaps for serving as a harbour to the coast guards, was obstructing the magnificent view. I tried to capture it hence, I moved around for a better place hurriedly before I miss the chance. Finally, settled to an adjacent land mass and did the rest of my photography. 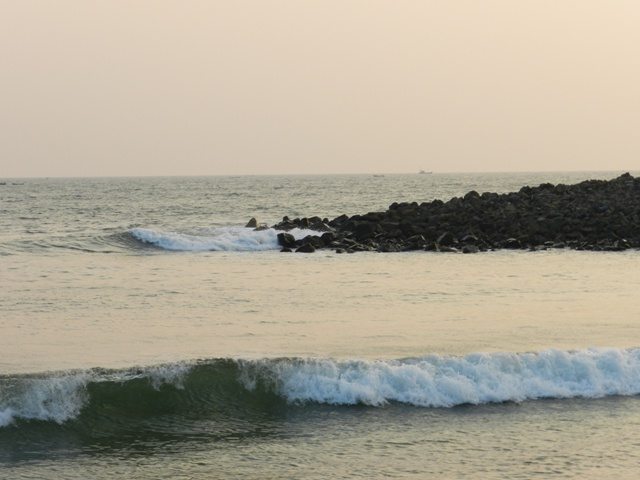 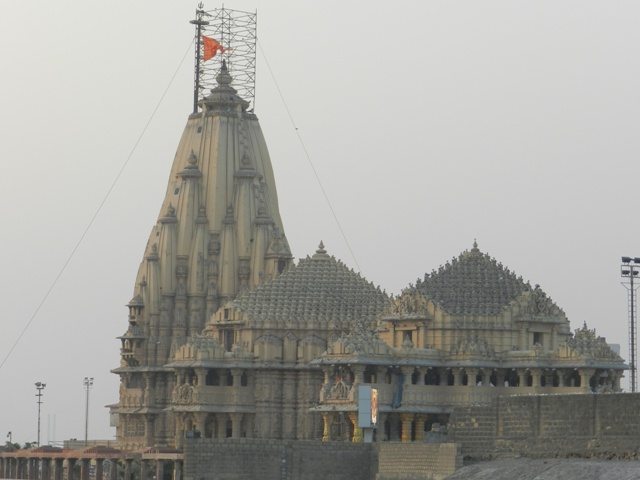 Soon, it was dark, substituted with artificial illumination gradually by lightning up with adequate arrangements, a little later the magnificent view of the Lingam was on display in the giant LED screens on all corners of the temple premise. The entire atmosphere inundated in waves of devotional, odorless fragrance with the magnificent view of the architectural structure of the shrine in lowly lit light with darkness on its backdrop.

People moving away of the invisible sea-side steadily gathered closer to the premise witnessing the extraordinary view of the mesmerizing well-lit surrounding. Every thing seemed live and vibrant and so were the enthusiastic visitors reaching out from all corners of the earth, with varying dialects, different apparels and distinct identities still bearing same trust and devotion with common motive. Small and big stalls, shops, hawkers, professional photographers, food joints, artifact and handicraft sellers to police officials, guards and other vigilance agencies were suddenly back on their duty and busy in a super-active mode in their own chores before winding up the day’s schedule successfully. Evening Aarti is performed at 7 pm after which hassle free darshan with a closer view of the deity from the permissible limit is a boon to the visitors staying back. The temple opens for devotees at 6 am and closes at 9.30 pm but the market remain hospitable till much later.

End of the day 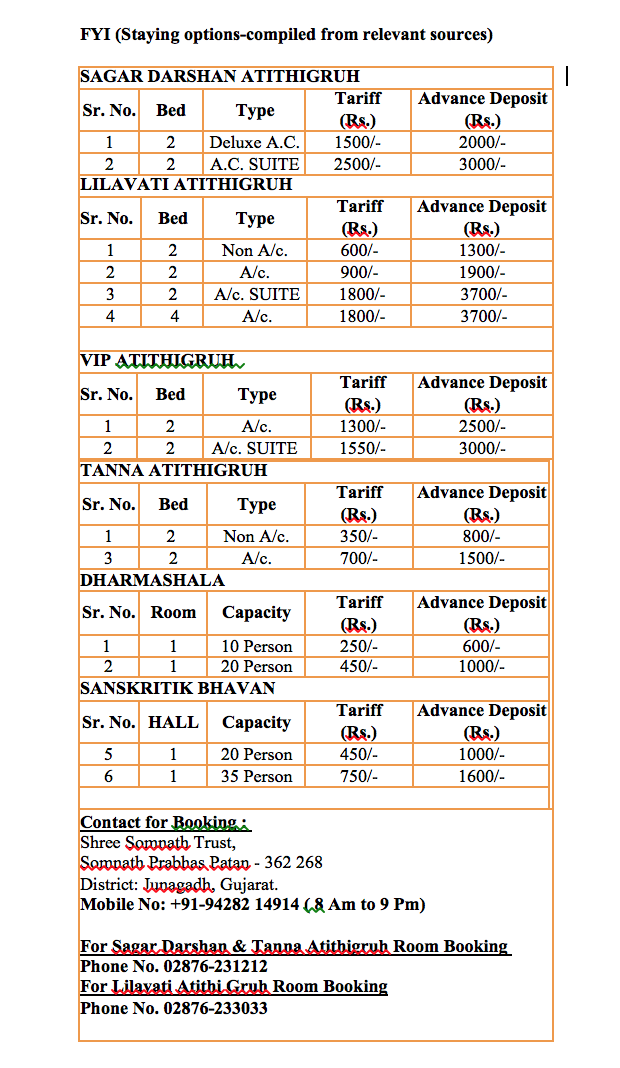 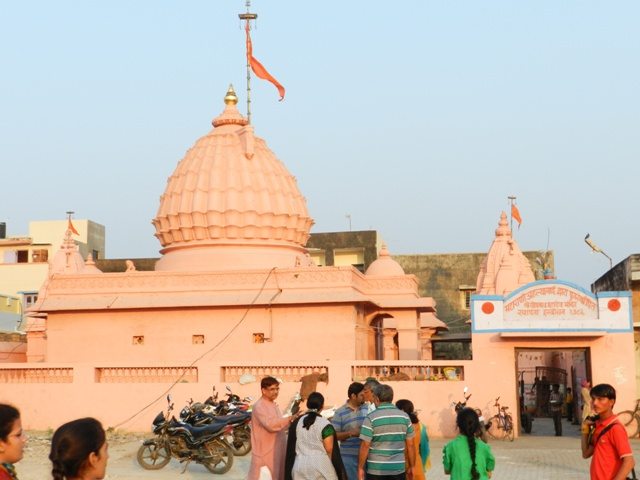 The 1783 CE, temple constructed with joint efforts of Raja Bhonsle of Nagpur, Chhatrapati Bhonsle of Kolhapur and Queen Ahilyabai Holkar of Indore & Shrimant Patilbuwa Shinde of Gwalior is still revered and situated adjacent to the modern shrine. Other smaller temples around there are also worth visiting with historical and mythological relevance. 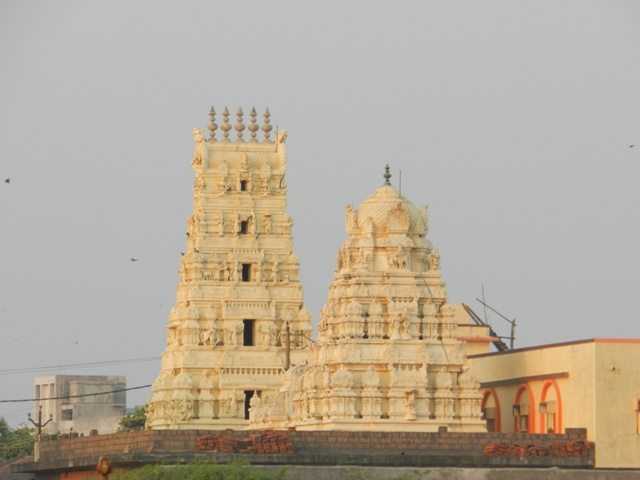 A statue of Veer Hamirji Gohil installed in honour to the the unsung hero of Gujrat who along with another less known brave savior Vegado Bhil fought till martyred in 1297 CE against Alauddin Khilji’s army in a futile effort to defend the plundering and destruction of the Somnath Temple. 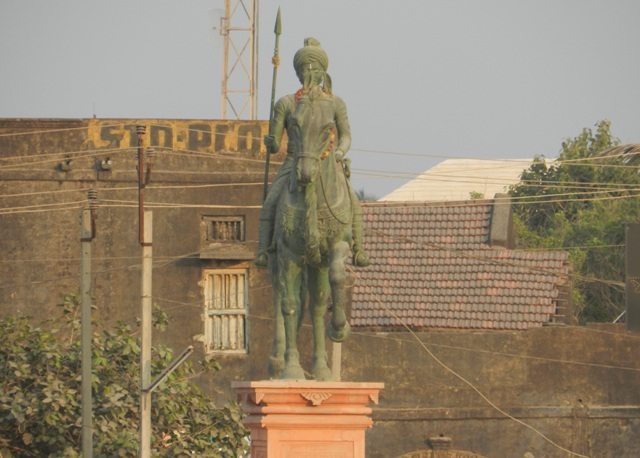 Browsing the previews of photographs taken so far on the camera screen, we soon lost in dreams till early next morning. At 7 am, we visited the temple again for another divine darshan of the deity and participated in the morning Aarti, after which we were set to visit Diu for transformation of the religious mood to a lighter, youthful and vibrant one.

Road Journeys – Towards Somnath, In search of enlightenment was last modified: September 17th, 2021 by AJAY SHARMA

It was fourth day of our W.Sikkim trip in May 2007. We woke up early and jumped out to see Mt kabur. It was…