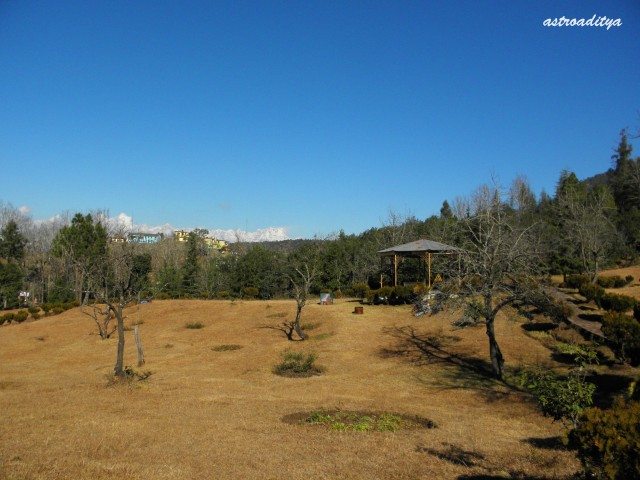 The bed, the pillow, the blanket, everything i touched was icy cold. I was trying sleeping but gave up the idea soon so i got out of the room and went to the balcony. I stood there for some time basking the sunlight and watching the clouds lifting up towards the deep blue sky and then suddenly disappearing in the air. The life was at peace again. The time passed by and the clock struck 1.30 pm and i woke up Adhiraaj.

We both needed something to eat as we were super hungry and went to the market in the village. It was not the market that one would find in the metros or hill stations like Shimla or even Chakrata. A minute was enough to go through the shops here.  We went to the only shop which was located at the entrance of the village and looked like more of a confectionery shop, hesitantly i asked the owner that if he could get us something to eat. His confident yes was enough to clear the doubts in my mind and we had a hearty lunch of Aloo Prantha’s, Maggi and Tea. I asked the shopkeeper of what place we could go around Khirsu and he gave us to options – 1. To walk for 5 km upto Rakhal for a clear view of the Himalayas and the sunset. 2. To trek 5 km uphill in the forest on the Adi Badri Marg to a temple and also for a clear view of the Himalayas and the sunset. It was 2.30 pm and the 1st option seemed within our reach.
Note – Apart from the restaurant at GMVN Guest House, you’ll find only 1  other place to eat in Khirsu Village with very limited options and that too closes by 8.30 pm. 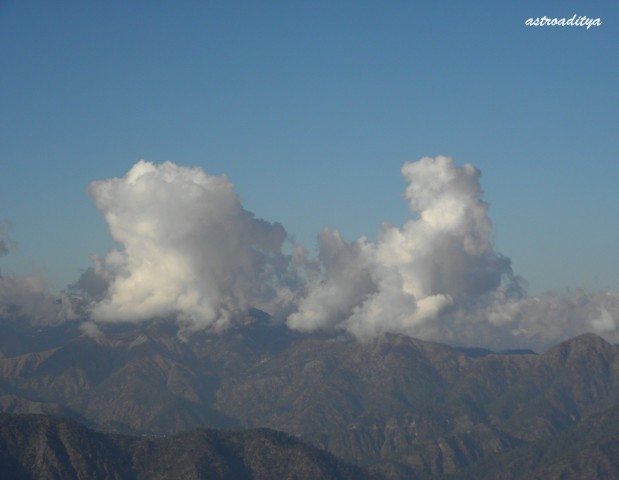 We were out again and had plenty of time to kill before the sunset. So we went to a park nearby. It was a nice place to roam around and pass time. I suppose all the tourists in Khirsu were present there. Also we located another place to stay in Khirsu – ‘The Nature Camp”. I saw the board in the morning but couldn’t find the place and their it was at one end of the park. After spending some time in the park we started walking towards Rakhal. After some 2 km the road divides and the one going down connects Khirsu with Srinagar. Further on the way i saw a board signaling our entrance to the forest area. I saw a group of women up on the hill collecting firewood’s and then dropping  them on the road. It was around 4.15 pm and we reached Rakhaal. The view from their was mesmerizing, and to enjoy it a shelter has been made there. Their was still some time left for the sunset and we sat down their after removing dust from the concrete benches. 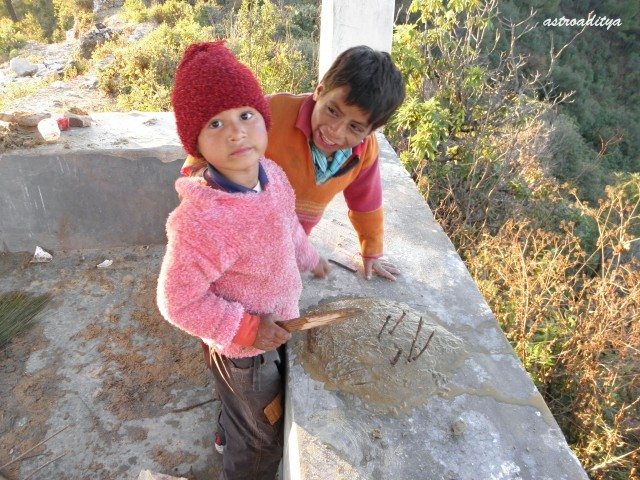 I sat their listing to the sound of the wind gushing past and a view of the imposing Himalayas to treat my eyes. I was in the state of trance. The sun was going down, the color of the snow capped peaks kept changing and the chill in the air was increasing. I saw 2-3 women coming along with their kids from the village nearby. They were busy gathering rocks and then sat at one side of the road and started hammering them. The kids came in the shelter and got busy making birthday cake of mud and placed wooden sticks in place of candles. When done they used a wooden knife to cut the same and started celebrating.

I was busy clicking but a sudden thought brought me to a halt. It was 6.00 pm, light was deteriorating fast we were some 5 km away from Khirsu and we had to walk back  those amidst the forest area in the dark and it was icy cold. We hurried back but the view was holding me back. I couldn’t stop myself clicking some more pictures. 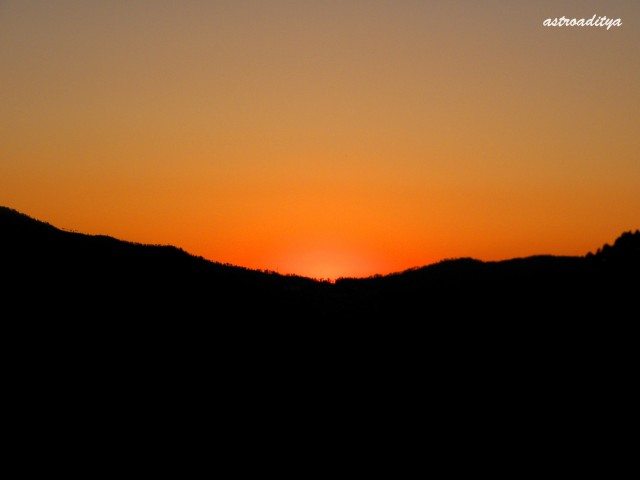 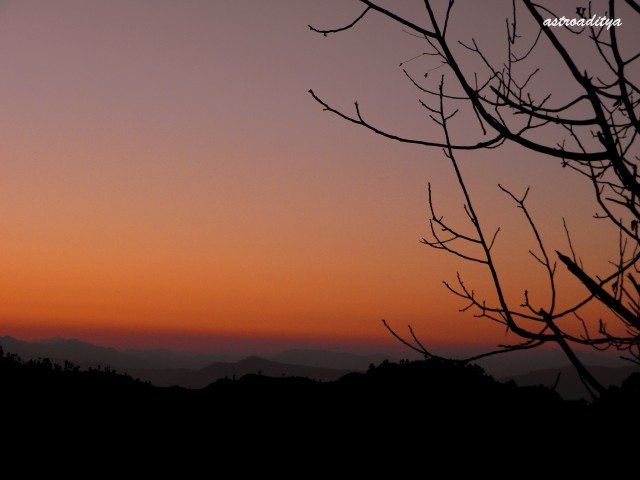 We barely covered 500-600 mts. that we heard a sound coming from behind. We looked back and saw a white ambassador coming towards us. I waved and the car stopped. The man looked well into his 40’s and was going to Khirsu. I asked him whether he could drop us and he promptly agreed. Of what could have been taken us another 2 hrs was covered in 10 minutes flat, also taking out the possibility of an animal attack that night and feasting on our bodies out of the  equation.

Their was still some light as we reached Khirsu. With all our heart, we thanked and offered him some money which he declined and then we moved towards the village. My camera was out again and i got busy clicking some final shots of the day. 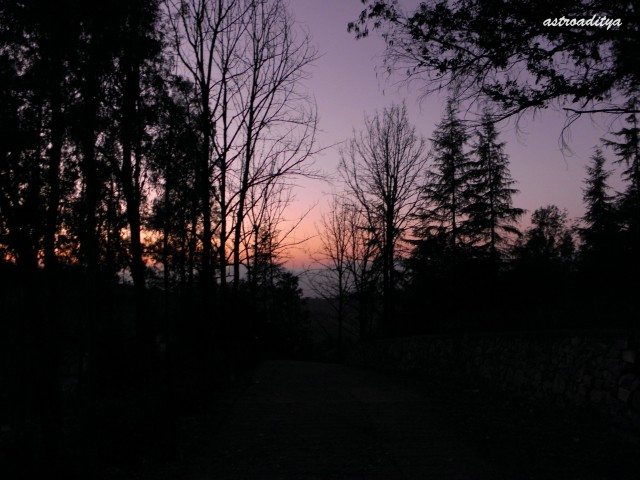 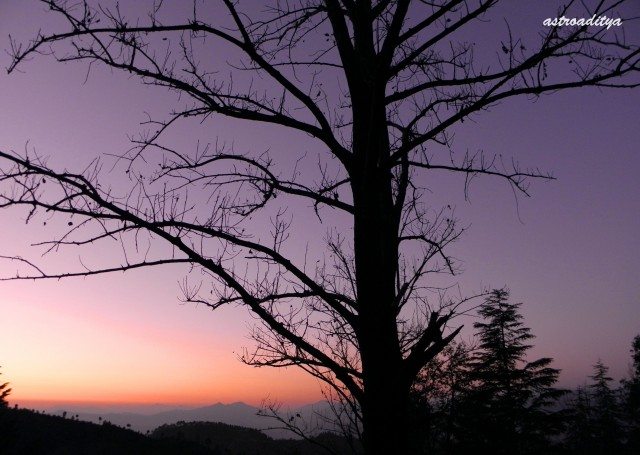 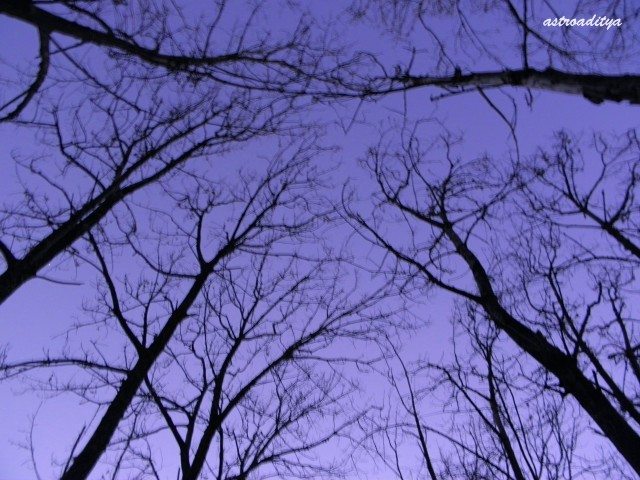 We entered in the GMVN premises again to catch the view and we thought of having dinner in the GMVN’s restaurant. We stood their for some time in the fading light and decided against GMVN and went to the same shop again. Dinner was again Parantha and Tea but we spent close to 2 hours chatting with the owner and a taxi driver from Delhi who came their for the dinner as well. Adhiraaj told me about his plans to go to Srinagar to meet his friend the next day, so after some discussion it was decided that we would leave from Khirsu early next day for Srinagar and then move to Haridwar by evening to catch the Ganga Aarti. The shop owner told us about the routes and timing of buses and taxi to Pauri and Srinagar from Khirsu which he repeated for 4-5 times during the entire conversation. The taxi driver also joined in and told us about his experiences in Uttarakhand and his client-age which included some famous bollywood stars. 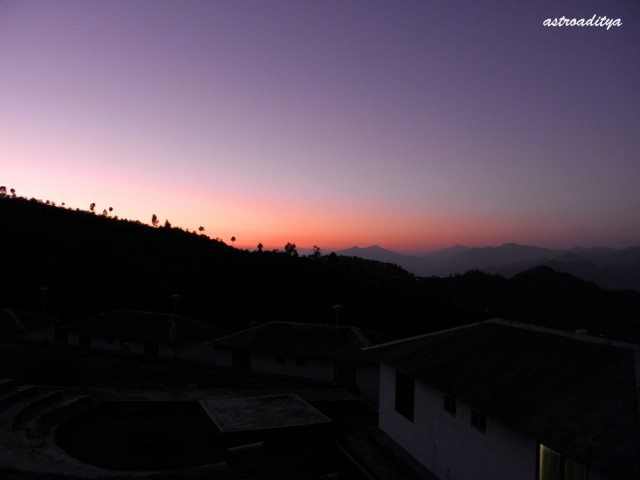 It was 8.30 pm, we stepped out of the shop and it was pitch black. I looked at the sky and saw million’s of stars. I was all excited as i was looking forward to spot galaxies, milky way, constellations etc. and we hurried towards our guest house as i switched on the flashlight of my mobile and Adhiraaj advising me to switch off the light as soon as i see eyes glowing on the way. Safely, we reached to our Guest House and the caretaker came rushing towards us and asked about our whereabouts and was worried as it was not safe to venture out after dark in Khirsu because of the visiting animals from the surrounding forest area. We waited some time for the lights of the Guest House to go off and then i went to the balcony. I was shivering uncontrollably because of the cold as the temperature was nearing zero degrees but that didn’t stop me to spend some time under the stars. It was a rare sight for the city dwellers like us, gazing at the night sky with a million of stars and the milky way going through. Back in Noida it was very easy for me to count the stars but here it was next to impossible. I woke up Adhiraaj again from his comfort zone so that he could witness this rare sight and then we spent some time gazing at the stars and I was rewarded with a sight of numerous shooting stars, galaxies, star clusters and constellations that night marking the end of an epic 1st day of 2011…..

Background It all started from a discussion with Nandan when he gave an idea for a long road trip from Delhi to Mumbai. It…