Hi, I would like to share our first long journey trip via road in our toyatafortuner car.  My husband, my 2 lovely kids and I love travelling,  so we normally  plan our trip well  in advance. This time around, we suddenly planned to travel to Bangalore via road from pune.  My husband and I were excited and at the same time worried if we could make it.  We referred to some reviews but couldn’t get 100% details, hence, the idea of  writing about our trip in detail , I thought,  will help many who plan to travel, especially for the first time.  At the end of this report , I have also given a detail report about the toll booths and the amount to be paid .

We started on Friday 12th May at 6.30 a.m., as we wanted to avoid the city traffic which will start after 7.30.  Even then , there were a lot of tourist buses and trucks on the  road till Satara.  We halted at  Hotel Abhiruchi , near Satara for breakfast at 8 a.m. We started again at 8.30,  The Quality of  Road was  okay, but you will  have to drive cautiously as there were many trucks , 2 wheelers and people crossing  especially near Satara. we reached Kolhapur at 11.15 a.mthe distance  approx..  was 240 kms. from pune.  .. Since, we wanted to do a bit of sight-seeing in  Kolhapur, we halted that day there.

In Kolhapur,  we had booked at Chandralok suite,  which was not up to our expectations and was only moderate.  We wanted to book a hotel somewhere close to the bangalore highway,but since it was  a peak season, no other rooms were available . our hotel was like a guest house.when I saw the ad and review in booking.com I got a different picture of this room.  The afternoon went off very bad , we couldn’t rest as the A/c. in the bedroom was not working Contrary to their ad there was  no bunk bed for the kids, and somy husband had to manage sleeping  on the sofa  in the living room.

The cost of the room was around 3900/- per day,  but I didn’t find the facilities upto the cost they charge.  The  kitchen and bathrooms  could have been more neat.  Evening at 4 p.m., We went to the famous laxmi temple and did a bit of Kolhapur sight-seeing, the weather was excellent .   We used the local transport (auto) in kolhapur , compared to pune I felt the auto drivers were very cordial and the rates also not very high. There was a reasonable amount of crowd in the temple but got the darshan within 1 hr.   Outside the temple, I  just enjoyed the sight of the lilies and the lotus flowers all over the market. We enjoyed the rain after the scorching heat in the afternoons.

Next day, exactly at 5 a.m., we started off to Bangalore. Bye ..Bye… chandralok suite!We filled our petrol tank full immediately as we reached the highway.  The road  here was excellent and  very smooth and there weren’t much traffic at this time of the hour, so my husband could easily drive at 100 to 120 km/hr. 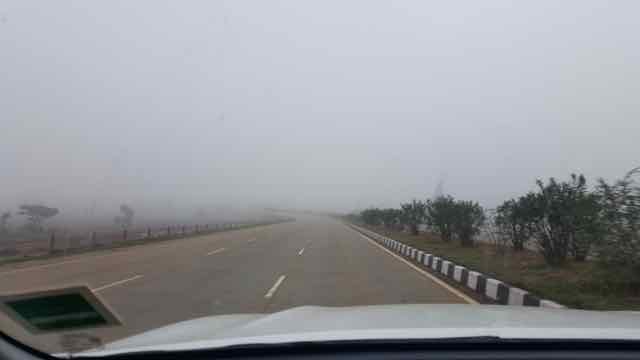 Kolhapur to banglaore at around 6.15 a.m.

Entered Karnataka. The beautiful first rays of the sunrise. 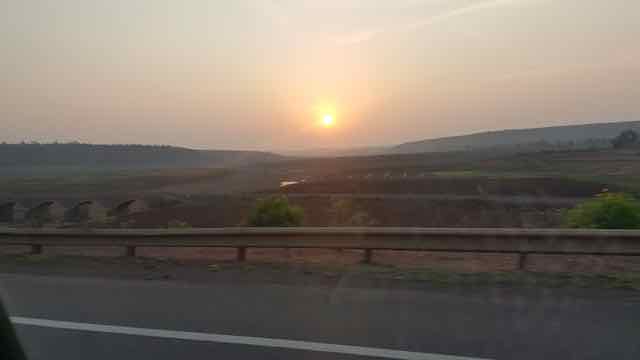 Nearing Belgaum. Thoroughly enjoyed the scenery and the weather was excellent and perfect for this drive.

Around 6.40 a.m. we reached belgaum bypass.  You will not find any restaurants on the highway till kittur  so if you are person who has early breakfast, its better to carry some snacks .  We stopped for our breakfast at Kamat Upachar at 7.20 a.m..  The food was very good.  I was so excited to talk in kannada after a long time. 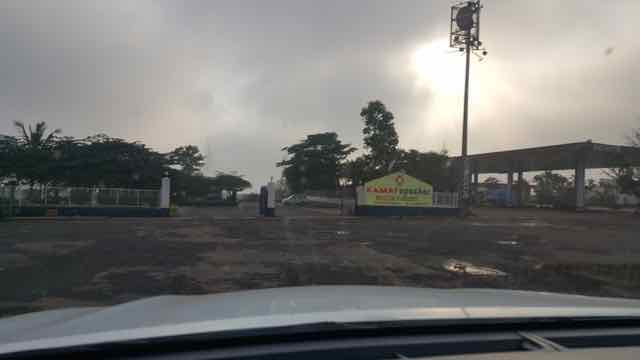 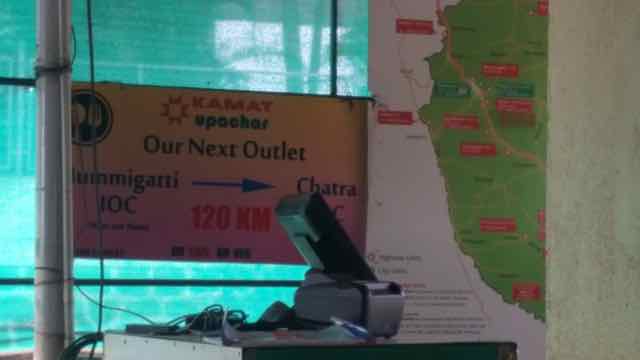 This poster we clicked inside the restaurant. Later found out that there are Kamatupachar almost every 120km. until u reach Bangalore.

If we miss this eatery, then you find Ramya residency in another 2 kms from there, but not sure how the restaurant is as we did not stop there.  After that we found 2 to 3 more restos near hubli, but we did not bother to halt anywhere.  We came across a few café coffee day also on the way.  It is a single lane from Hubli to Dharwad , hence the speed also reduces to 60 km/hr. as we were not able to overtake the trucks  and the road is also not so smooth.

You will come across a temple of gomateshwara  (around 14 kms. after hubli) on your left side.  The toll bill given at the nandi highway ie.Hubli – Dharwad bypass has to be shown on the other side so keep it safe. At 10.30 we reached Chitradurga, the city of Forts,  do enjoy seeing the mountains.  the weather was excellent so we really enjoyed the drive. 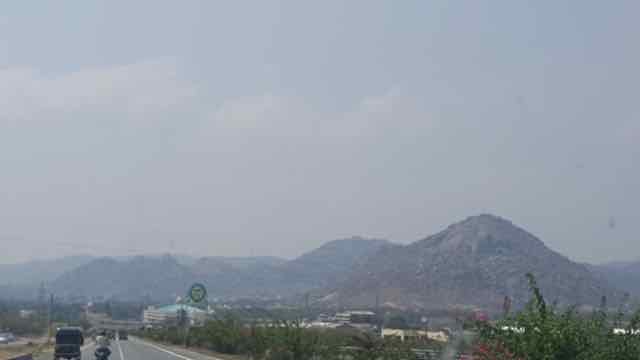 The city of Forts -Chitradurga. 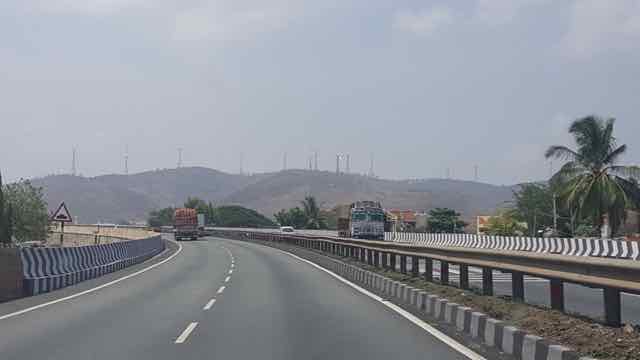 Around 1 p.m. we took a break for lunch in tumkur.  There were many Kamat Upachar all the way through, but we chose to stop near tumkur.  Immediately after the tumkur toll there was this Kamat.  The lunch was excellent .  They also serve in the traditional banana leaf.  Enjoyed the food,  the quality was very nice. We took quite sometime  at this restaurant and left by 2 p.m. to Bangalore.  We reached the turn to BEL Circle road by 2.30 and since our destination was new bel road, we only had little traffic near the bel circle, and reached our destination by 3 pm.

So, the total time taken for us after all the breaks from Kolhapur to Bangalore was 10 hrs.

We left back to pune after 3 days stay in Bangalore.  Again, we started early by 5 a.m. from new bel road,  as we wanted to cross tumkur before the traffic starts.  The journey was very dry this side ,  we had problems to find a good restaurant for our breakfast.  There were many café coffee day, but we didn’t find any restaurants where we will come across some nice breakfast.

With the speed of 100- 120 km/hr., we reached near kolhapur by 1 p.m. and atlastwe  found smile stone restaurant , which was good.  After that there were many restaurants, until you reach pune, but since the traffic was heavy, there are many road works going on and the local traffics are merged with the highway, it took more than 4 hrs. for us to cover the 240 kms. fromkolapur to pune.  We reached our destination in pune by 6.20 p.m..  I would like to say that if one has enough time , he/she should try the roadways.   This trip was a very memorable one and  We Enjoyed it. 

Toll Booths from Pune to Bangalore.

This is what we had to tell you about the garden city of Bangaluru. Hope you enjoyed reading it and do tell us your experiences as well.