Till now, we have almost seen the Edinburgh Castle, had fun at the expense of some inanimate museum artefacts, booked a ghost tour, walked up and down the Royal Mile, peaked inside the Scottish Parliament, and boarded a cab to get to our mysterious hotel.

And now, we were standing on the doorsteps of the hotel with no apparent way to get into the reception. Stuart called the “hotel-people” from his cellphone and was given the code to punch into the keypad to open the main door. He did that and once we were inside, the voice on the phone informed him that our keys were on the reception desk. There was no one at the reception so we grabbed the keys and headed out to find our rooms. One room was on the first floor. Kelsey and I grabbed it while Hannah and Stuart were forced to share the other room which we found was in the basement. The hotel was absolutely silent so we assumed that it wasn’t really full. We were wondering why we couldn’t have got the two rooms together. There were those quintessential long, carpeted corridors and those creaky staircases that are unique to old, wooden buildings. Hannah and Stuart dropped their bags in their room and came to our room. It was here that I was introduced to “Come Dine with Me” – a show I would be hooked on to for many a month to come.

After a while, it was time to head back to the town for the Ghost tour. For some reasons, I was almost chickening out. And my friends weren’t having it because it was my idea to take a Ghost tour and we had already paid for it. We headed to a pub to have some drinks to soothe our nerves. It turned out to be a ‘not-so-great’ idea for reasons that I’ll share later. Anyways, after a while, I felt brave enough to head to the place where we were supposed to gather to join the ghost tour.

Some Coke to Calm our Nerves 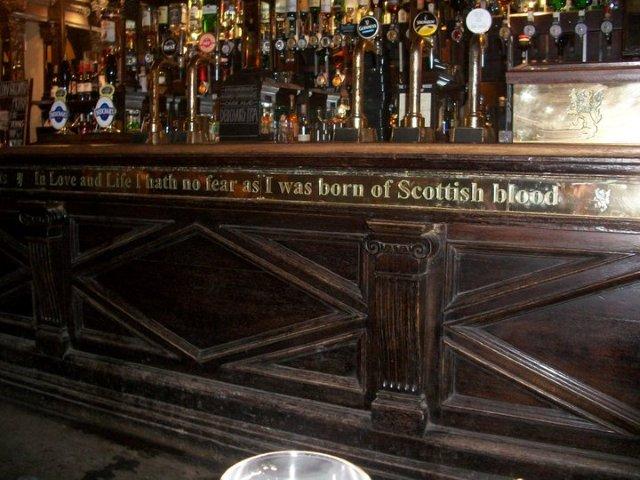 The Pub’s Message to Us

We had been there for some time and we were chatting happily when there was suddenly a loud exclamation as a pale guy dressed in a black cloak announced his presence. Our hearts had almost come out of our mouths and it took a while for our heartbeats to calm down to the non-fatal levels. This was going to be the scariest part of almost the entire tour, except…well hold on to your horses.

The guy had now calmed down enough and introduced himself to us as Martin, our tour guide. He tried to make conversations with everyone who was going to be a part of the tour. When he came to our group, here is how the conversation went:

As he moved on to other groups, we discussed his awkwardness and decided that he did not know how to make conversations. And we also wondered why he was spending so much more time talking to other groups. Obviously he did not like people from Newcastle!

And then the ghost tour started. I’ll not give you the details of all the stories he told and all of the places he took us to but would just want to share that some of them became more scary and vivid as we mulled over them in our brains and imagined those events taking place. However, the impact of the stories was dampened by groups of drunken guys walking across the street and shouting out to us. “He is lying! He’s lying!” and making rude gestures at poor Martin. He handled all of this with grace though.

The last part of the Ghost tour was a visit to the dungeons. Keep in mind that this was after 10:00 PM and dungeons are under the ground, are kept from caving in by lining the walls with huge, cold stones, and have a musty, dusty, underground odour that is so typical of Crypts. This was the part I was most looking forward to and dreading at the same time. And this was the time when we realized that those drinks were not such a good idea because some of us had to use the restroom but there weren’t any around. They ran off to a nearby hotel. The rest of us were just beginning to think (or hope) that we’ll have to abandon the tour when they came back, smiling.

And then we were escorted deep into the earth, down a staircase lighted by the flickering lights of a few candles, into the dungeon. The dungeon was a series of interconnected stone chambers of various sizes. Apparently this was the place where several people had sighted unearthly beings during ghost tours. There was absolutely no other light except that of a single candle in each chamber. And that too had to be extinguished as we exited each because our guide professed that he was too chicken to come down alone later to extinguish these candles. As each candle went out one by one, we were surrounded by almost complete darkness in the last chamber. At this time, nervousness was running high and we were ready to jump at the slightest sound of the wind blowing. It was almost like being in a grave. And to make things a little more morbid, we realized how it must feel to be buried alive. Needless to say, we rushed out like mice from a drowning ship when our guide showed us the way out.

The purpose of the this video is to give you an idea of what the dungeons or vaults feel like. This hasn’t been recorded by us.

Though the ghost tour was over, our ordeal wasn’t over yet. We had to go back to that creepy hotel and stay there for the night. And when we got back, the hotel looked as deserted as it had earlier. There wasn’t a soul (at least one inside a living body) around. And though both me and Kelsey had earlier professed our respective resentments for having to share the room with each other, I am sure that both of us were secretly glad of not being alone that night, in that room, in that hotel, in that city.

Day 2 :
Day two began with a hasty exit from the hotel. All through our stay, we hadn’t come across another human being, no guests, not even any of the staff though our towels had been changed and bed sheets replaced. After a quick breakfast in one of the cafes, we took a taxi ride to the castle. And, lo and behold, there was absolutely no crowd. The queue wasn’t too long and before long we were in the possession of our tickets to enter the Castle.

No Crowd and no Queue

After spending our precious money on the tickets, we wanted to scale every inch of the castle so we looked at each and every exhibition, chamber, cellar, canon, and each bit of each armour in great details. 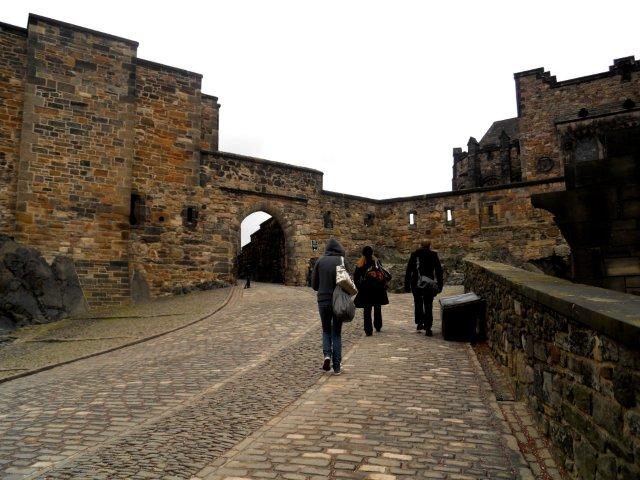 Scaling Every Inch of the Castle

Stuart even explored the insides of a Canon.

We didn’t want to miss anything

We even looked over the high walls of the castle. And were rewarded with excellent views of a lower garden and even of the entire new town. 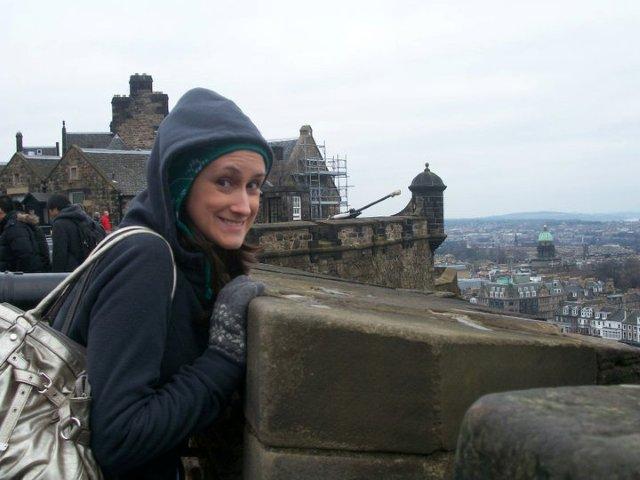 No! We didn’t want to miss anything. 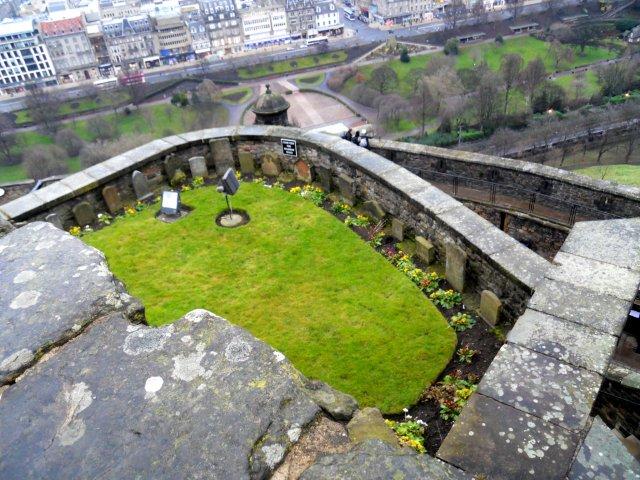 Over the High Walls 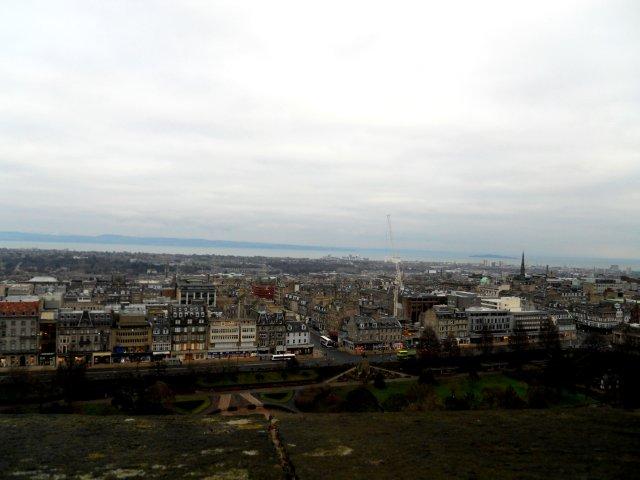 A View of the New Town and the North Sea beyond 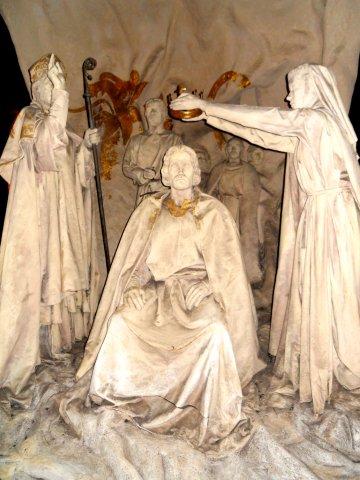 The Crowning of a King. 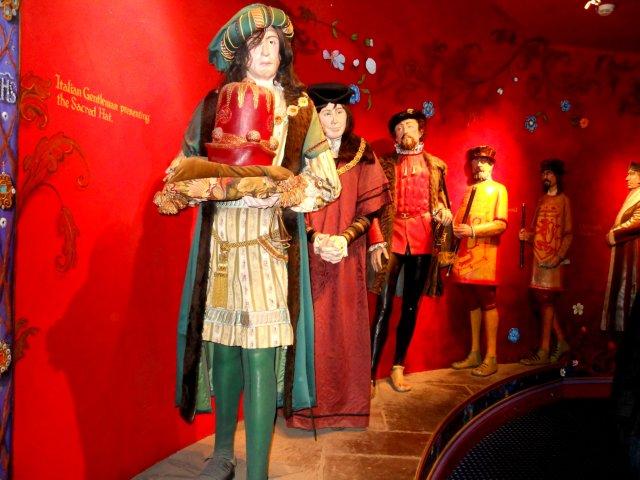 Almost the entire morning was spent at the castle. And after that we went in search of the fabled Writers’ Museum. And we again ended up scaling the entire mile up and down before accepting that it was probably a myth. Well don’t take our words for it. Try locating it yourself and do update me if you are successful.

With a few hours to kill before our train back to Newcastle, we decided to enter all of the free museums and exhibitions on the way to the station. In this process, we came across the Museum on the Mound which was all about the evolution of money. Here, Kelsey and Stuart played all games including jigsaw and building a house. The last stop was at the Royal Scottish Academy to look at contemporary art. We loitered around, not having the faintest idea about art. I was slowing down the group because I felt obliged to read the description of each painting. Anyways, we still had time to kill and had run out of all the free options by now.

Shortly, we boarded the train back to Newcastle. On a serious note, I didn’t know it back then but I realized how much I had fallen in love with the historic city when I visited it again in September. The cobbled streets, the happening crowd and the lively Scottish people are all etched in my mind along with Martin of the Ghost tour and the spooky hotel. In my memories of the UK, Edinburgh stands right after Newcastle in terms of my knowledge of the city and also my affection for it. 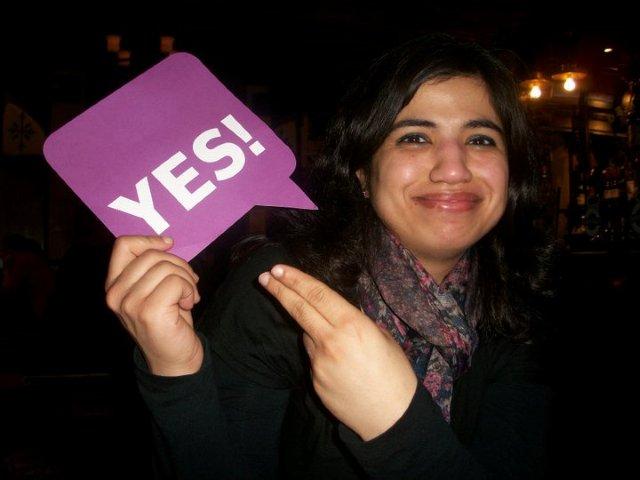