Till now you read that after visiting Jwalajai, Rewalsar, Parashar, Manikaran, we stayed at Pandoh.  Everyone was happy that we were not going back to Delhi and going to Jalori pass.   I had extra excitement because I had never crossed any mountain pass in my life.  Two times I was near Rohtang and both time it was closed.

During our last Himalaya yatra, I had suggested Jalori, but my co-passangers did not like the idea because they thought Jalori – ye bhi kya naam hua, kya hoga wahan par ?   Although Jalori is lesser in height than Rohtang, but is not very common among tourists mainly due to its very difficult roads and dangerous curves. 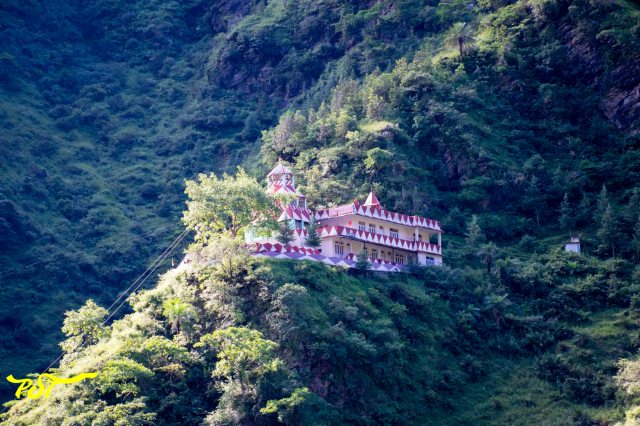 We started early and reversed cars towards kullu again.  In the way we came across Hanogi Mata temple.  The temple is on the other side of Beas River. There is a temporary bridge and a small cable car to cross Beas… another 30 mnts hike and we reach the temple.  The temple is situated among lush green mountain.  We continued our journey towards AUT, the longest tunnel in Himachal or rather in India. 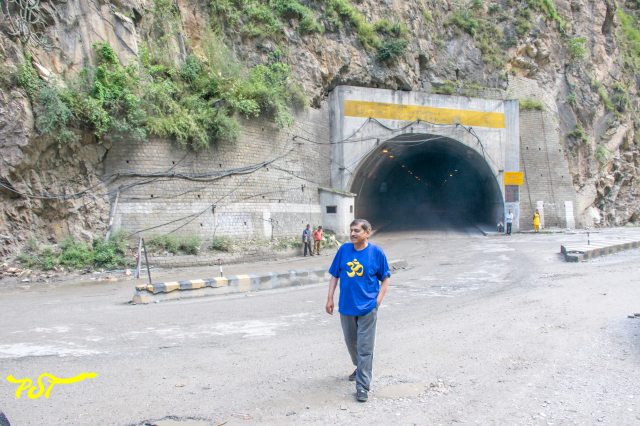 We had crossed this tunnel yesterday, but today we were not going to enter this tunnel.  We continued on the older route towards Larji and then on a sharp turn towards right, we took the Jalori Pass road.  The road was very small yet  beautiful .  We had entered the Tirathan valley…still not bustled by tourists and only adventure loving people roam around here. 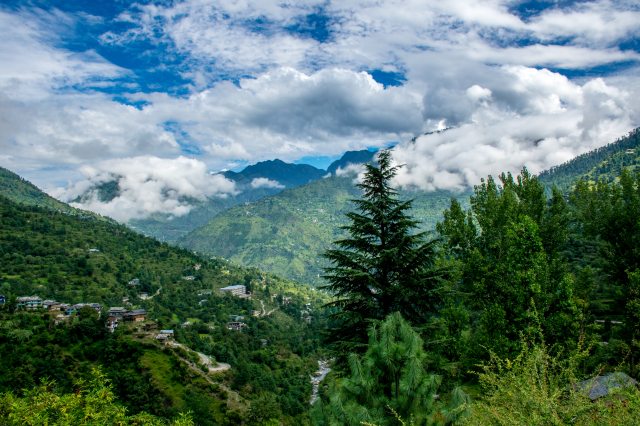 The scenes around were so beautiful that we had to take lot of breaks in between to view and photograph the scenes.    No one can imagine that just near the busy Manali highway, we have this little heaven, with no traffic horns, no crowd of vehicles… the only sound being breeze whispering to the trees and birds chirping…… Aha !!  one has to be there to feel the magic !!

We had never been so relaxed in whole of journey… there was no hurry, no tension and no tight schedule.  The small road winding though the lush green valley, was reminding all the best song I had heard in my life like for example:- 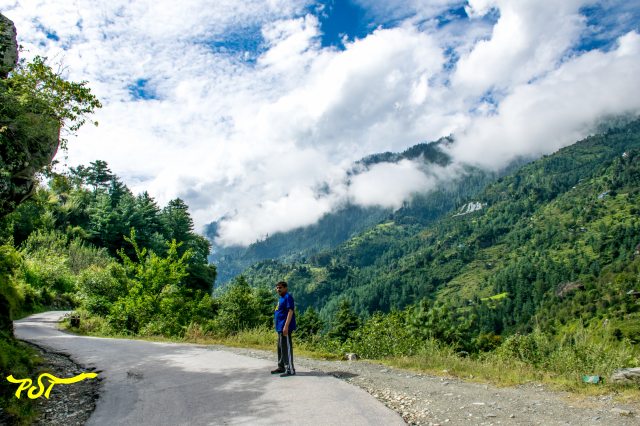 The road was quite good till Banjar and then we started having some bad patches…but still the road was free of potholes…  Bolero is quit strong jeep and is quite fit for these roads.   We were meeting dozens of Boleros on the way, but all of them were plying as goods carriers..perfect for such hilly roads…. also in all these days we saw a lot of Nanos in Himachal… it looks all the Nanos were purchased by Himachalis… if you remember, on way to Parashar, it was Nano with its five passangers, that encouraged us to reach Parashar. 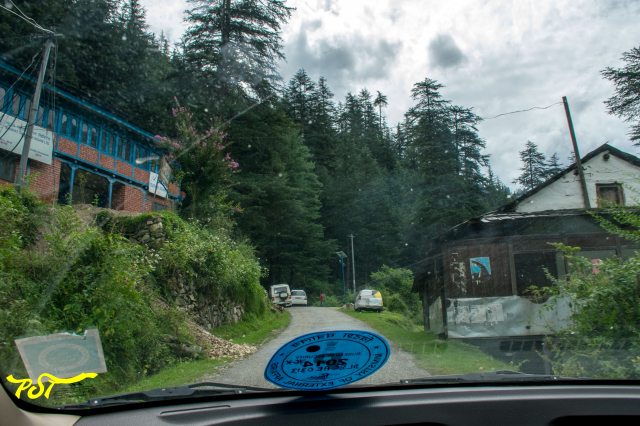 The road remained small and broken till Shoja.  The curves were becoming sharper and we were gaining height very fast.  And the moment we entered Shoja we stopped.   In the beginning of the little sleepy town of Shoja, was this guest house called Raja guest house.  No one had ever told us about this, as most blogs talk about Banjara Camps in Shoja. 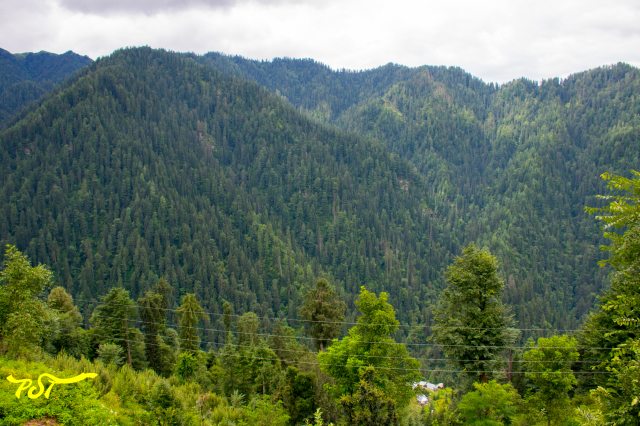 We stopped at Raja’s and ordered tea and pakoras.  I cant think of any bigger luxury than drinking hot tea and eating crispy pakora at the height of 6000 feet, with nobody around and with mind-blowing vistas around.  Raja’s had 6 beautiful rooms to rent, each room having a view of the valley, which is indescribable in words.  The rooms were 1100 Rs. per night ……just 1/3 rd of Banjaras.   Since we had not planned to stay here tonight…we promised ourselves that the next program will be made with a stay here for night. 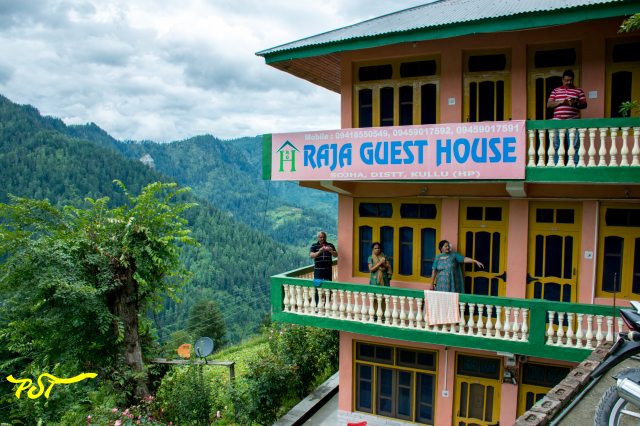 The Guest house had plenty of apple trees laden with red ripe apples.  We checked with the manager, if we can pluck some apples and to our surprise, he immediately said yes with a smile.  We tried our best to reach the apples but they were far from our reach from all sides…now we knew why manager allowed us to pick apples, because he knew we cant reach them :)  Then on his wife’s request, Laxman decided to climb the tree and pick some ripe apples….  प्रेयसी के लिये चांद तारे तोड़ने की बात तो बड़े आशिक करते हैं… पर 50 से अधिक की उम्र में 6000 फीट की उंचाई पर और भयानक ढलान पर लगे पेड़ पर चढ़कर, पत्नी के लिये सेब तोड़ना असली प्यार होता है… 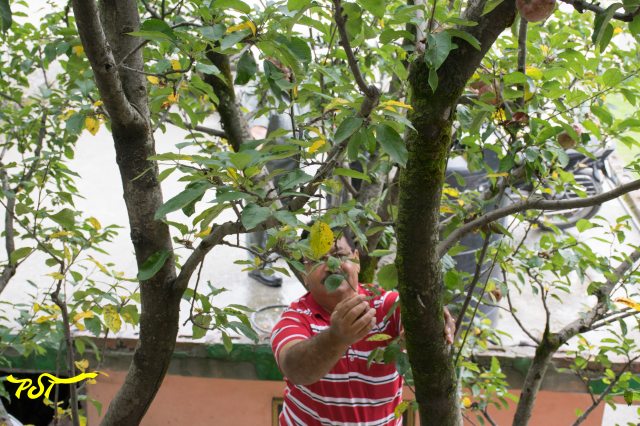 Laxman came down with 3-4 apples, which were not ripe nor sweet, but seeing the dedication of Laxman their taste felt like that of nectar. 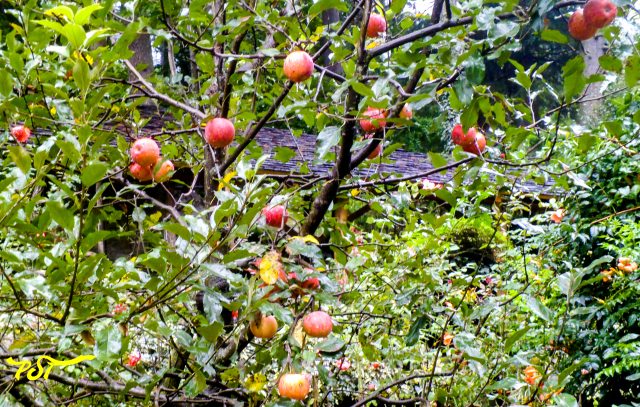 The manager showed us a small building up afar and revealed that it  was Jalori Pass where we had to reach.  The vistas were beautiful and Jalori looked very far still 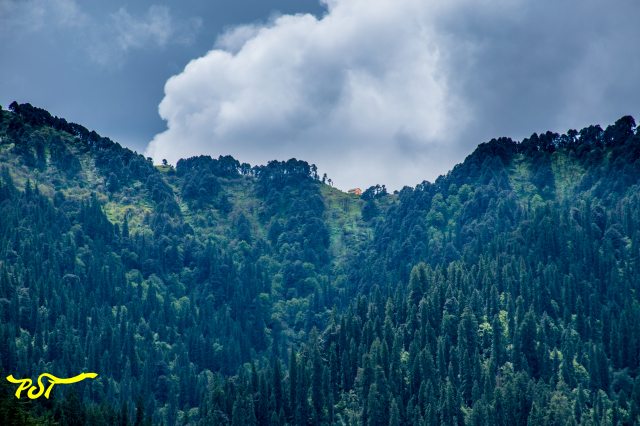 That red hut up there is Jalori pass…. zoomed from Shoja

Jalori was just 5 Kms from Shoja, but the steep road, pebbles and potholes, made us complete this journey in about 25 mnts….all the way upto in 1st gear.

And finally we reached Jalori pass……at the height of 10,821 feet…with no population or village around… Jalori pass has a small and beautiful Mahakali temple and a few shops offering basic food. 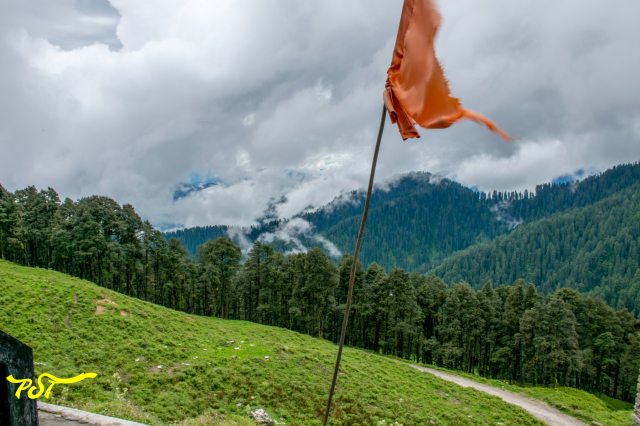 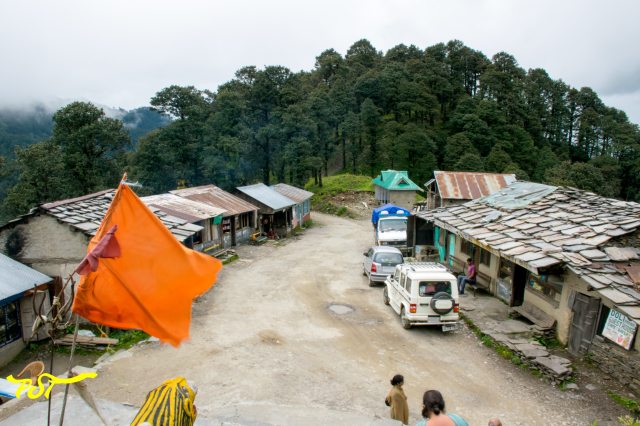 Five Kms trek from Jalori takes you to Serolsar  Lake…an easy trek but was left by us for next time.  We stopped at Jalori and first went to the Mahakali temple, to pay our respects to Mother Shakti for letting us reach here without any problem. A policeman present there told us that there is a beautiful tent colony at about 1.5 Kms from Jalori.   If we plan to stay here for night, we can utilise that resort…  well that was a very attractive offer, but alas we had not planned to stay here for night… next time may be ! 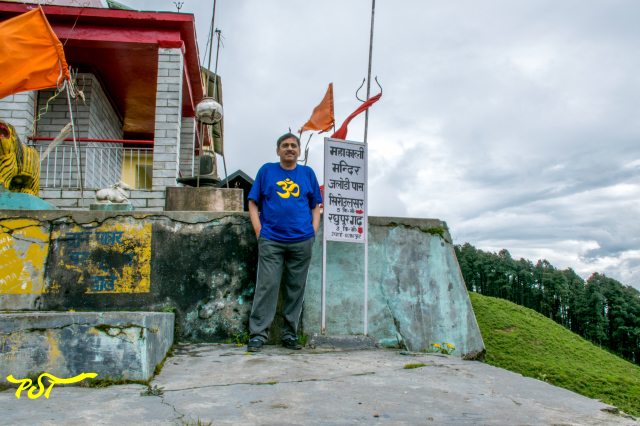 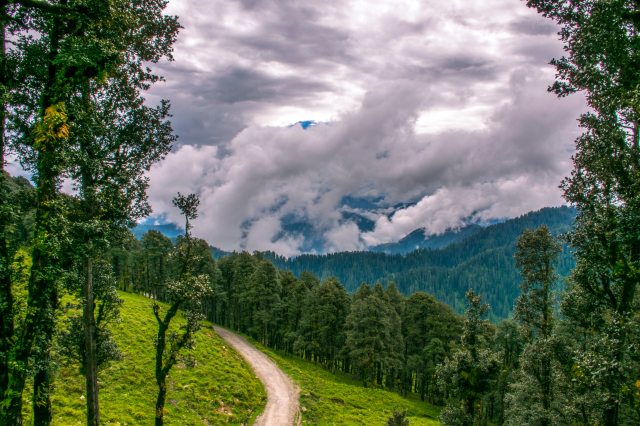 We enjoyed some tea and hot pakoras.. Jot was completely empty of tourists…only some local villagers who had a stopover here for tea and snacks. 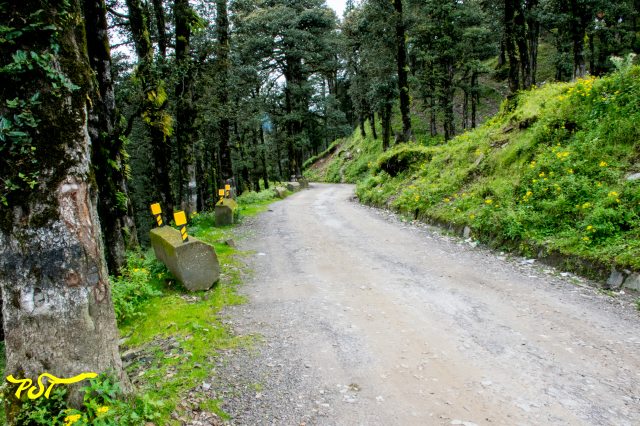 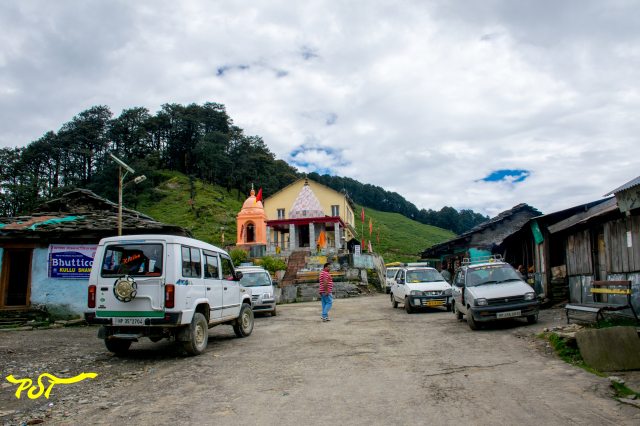 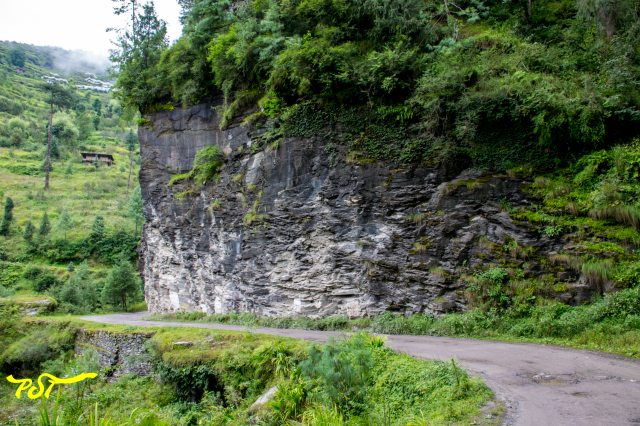 After about two hours enjoying at Jalori Jot, we started our descent toward Narkanda on the other side of Jalori….  The road was not bad…Kuccha for about 10 Kms ..On this side of Jalori, the road is not as steep as from Kullu side….  We continued further… in no hurry because we were going to stay at Narkanda today night..