Our trip to “Paradise on Earth” began with an adventurous note. I had booked our onward journey to Delhi from Pune through Air India. I was warned about Air India, but I threw caution to the winds! The delays, the strikes reported in the newspapers always happen to others right? It never happens when we travel … well that’s what I thought! I could experience firsthand what was being reported in the newspapers. The flight that was supposed to take off at 7.45 am was rescheduled several times and eventually to a state where I could have missed my connecting flight from Delhi to Srinagar. I have to do last minute cancellations and re-bookings at the airport that set me back by 45k. Our aviation regulations are still at their infancy. Airlines should be made to pay for their follies. Anyhow, the silver lining was the ease by which I could quickly book seats on different airlines without impacting my overall schedule.
My story dates back to January’ 12 when I along with my college friends of yore, started planning for the Kashmir trip. As we did not have a clear understanding of the security situation in Kashmir and the fact that we were travelling with families we found it prudent to take the services of a travel company. After talking to a few travel agencies we zoomed on to Sachin Travels who have been providing Kashmir tours for last twenty five years. The tour itself cost us Rs.23,000 per individual. 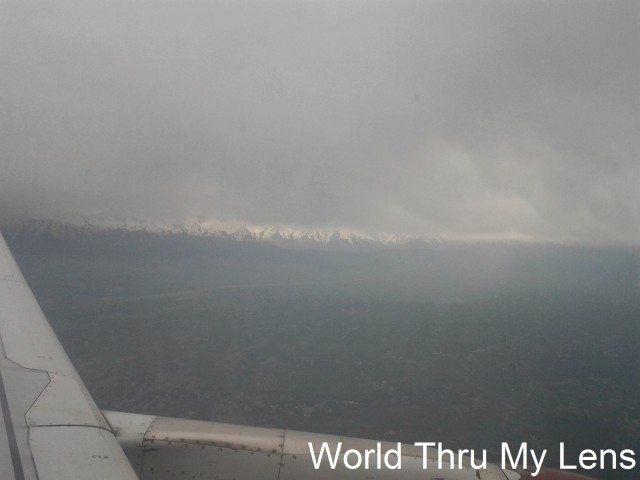 Aerial snap of the mountains

As we walked out of the plane, the sun was just setting. The cold evening air was a welcome change against sweltering weather we were briefly subjected to, at Delhi. The route from the airport was equally lined with army personnel as with trees! The presence of army has definitely brought peace to the valley. The locals have taken the presence of army as part of their lives. I felt the mood was generally upbeat amongst the locals as they look forward to the tourist season. I felt secure.

We were put up at Grand Habib – a fine hotel with all the modern amenities. The travel agency goofed up our reservations. They booked a room short and for the first two days we had to adjust. As we settled for dinner that night, our tour manager informed us that our trip to Gulmarg next day had to be deferred as the Gondola ropeway to Khilanmarg has snapped. We had to change our plans on the fly and decided to do local Srinagar sightseeing the next day. 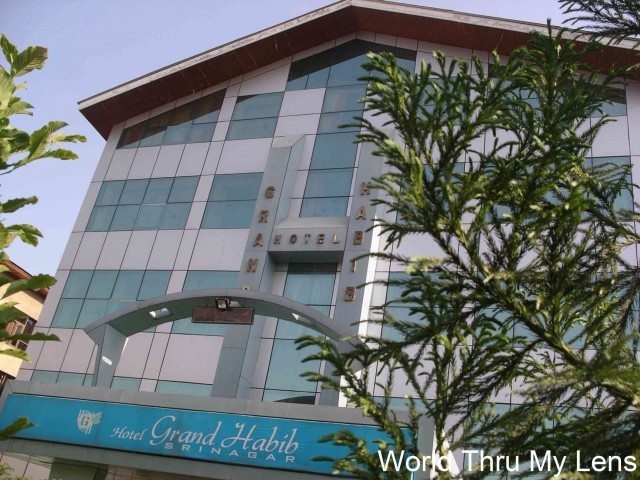 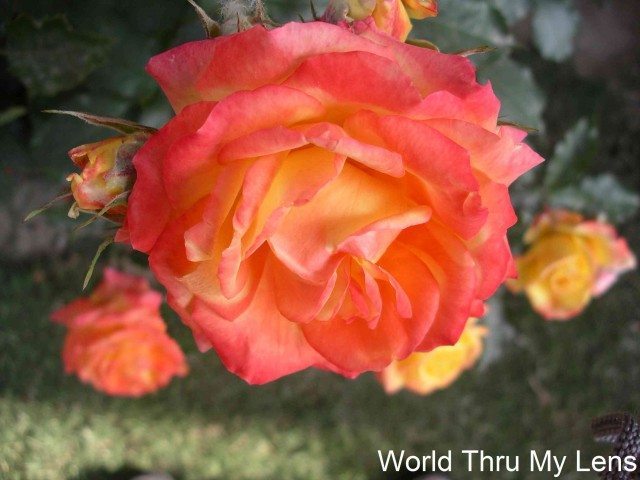 We retired for the night eagerly looking forward to a memorable trip.

The entire tour group comprised a total of 80 people. To ensure that the group stuck to the timings and to make the overall process efficient half the group was put up in a different hotel. Cooks from Sachin Travels were available at all the locations we visited and dished out delicacies throughout the trip. At times, this was a pity as we missed out on the local culinary.

We commenced our tour with a visit to the Sri Sankaracharaya temple. It is situated at a height 1100 feet above sea level. One has to climb 270 steps to reach the temple. The view is spectacular from here. Unfortunately, the security is very strict about cameras, cell phones etc. We just clicked the view in our memory and moved on. The temple was built in the 1600s but still stands tall and overlooks Srinagar. The small cave within its precinct houses a Shivling.

The morning was spent following the footsteps of the ancient Moghuls who had the foresight to design beautiful gardens like Chasmeshahi, Shalimar and Nishat Baug. It has been truly an era of creativity. The sheer range of their creativity from small intricate carvings on wood to magnificent mega gardens is mind boggling.

There is magic in the air! These formal gardens of the Moghuls are definitely a treat for sour eyes. I have never seen roses and other flowers of such different colors and sizes before! I am not in to floriculture but it definitely left me mesmerized looking at the wave of hues gently swaying in the breeze. I am positive that the beauty of the region is largely due to mineral rich water flowing from the Himalayan ranges. Our guide insisted that all of us taste the cold water from the flowing water in the garden. Let me assure you that it is nothing like the water we drink in our cities. The richness is hard to describe. 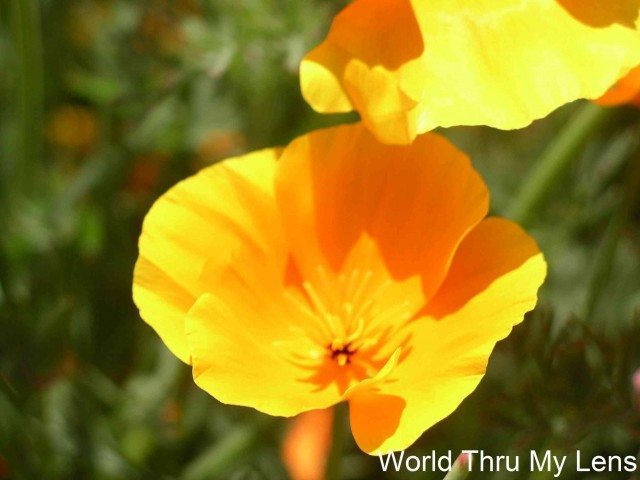 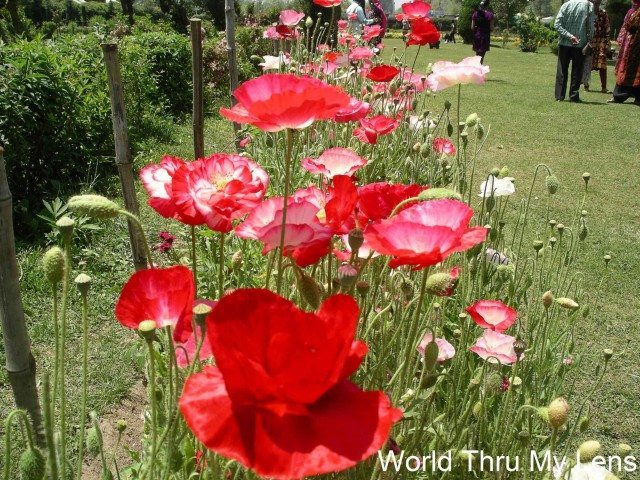 I was pleasantly surprised to see so many Indian tourists in Kashmir. This also reflects the changing perception about the security situation in this region and it would make any Indian proud. We were not fortunate to see the Tulips in full bloom as it was not the season.
The epicenter of this lovely place is the Dal Lake. With the House boats lining the banks of the lake and the Shikara’s idling on the lake, it’s a picture perfect setting. The evening sun played cat and mouse with the clouds creating a magical effect over Dal lake. As the odd boatman winding his business for the day slowly rowed past, one could hear the sound of oars gently pushing the water as if not to hurt them! The sun rays glided on ensuing ripples creating an image of crimson Kashmiri carpet urging the onlookers to take out their cameras to capture the ethereal beauty. 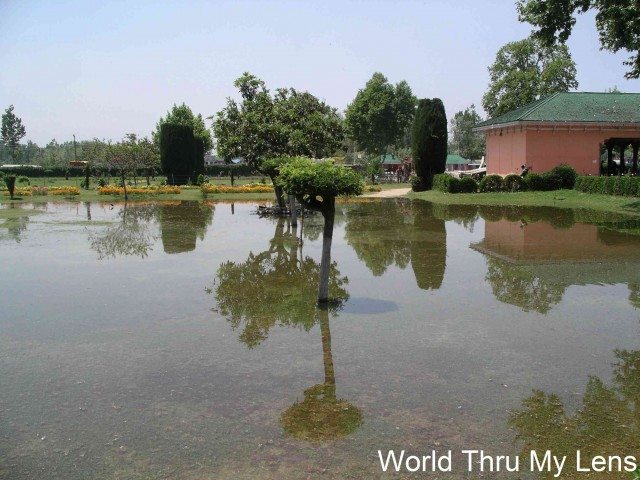 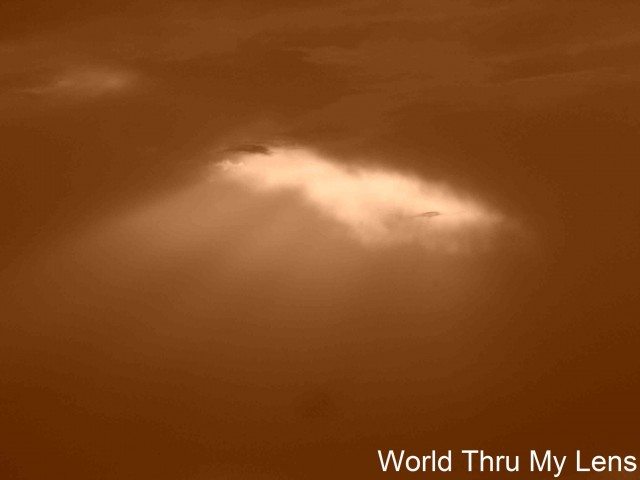 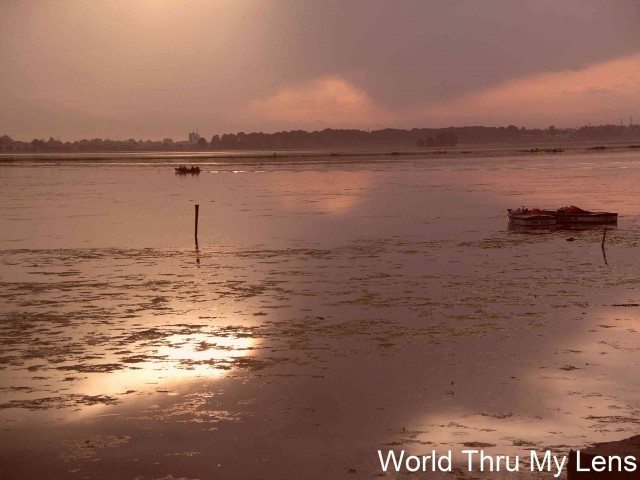 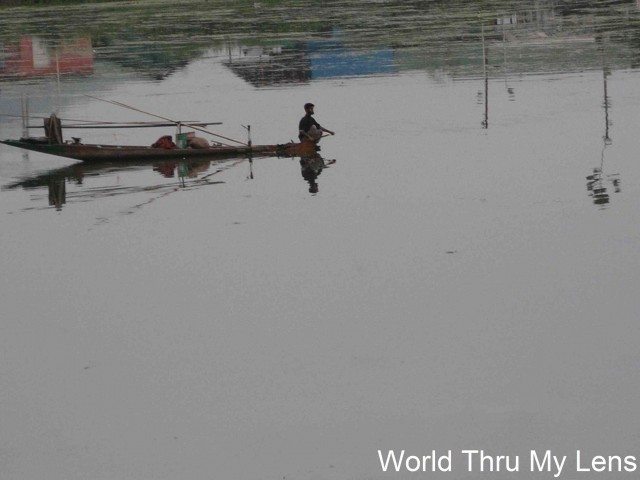 We ended the day with a stopover for shopping. Kashmir is famous for dry fruits, saffron and handicrafts. The carpets of Kashmir are famous but surprisingly there is no formal industry. The carpets are made at home with the secrets passed from generation to generation. We tasted our first “Kawa”, equivalent of Kashmiri tea. It’s made of herbs and Saffron and is served hot with no milk added. It was energizing and refreshing after the exhausting day. The shoppers in the group satisfied their initial appetite with some frantic shopping of dry fruits, saffron and Kashmiri handicrafts.

The next day had some exciting events in store. We will be visiting Sonamarg to catch the retreating snow. In the evening we would be shifting our base to houseboat. A great day to look forward to!

Mehrauli quickly became a hotspot for construction which continued for centuries and today perhaps boasts of more monuments than any other part of Delhi. The building of Mehrauli started just a kilometre away from Fateh Burj where Ghori and Aibak entered Qila Rai Pithora after defeating Prithviraj.