I got up late had a leisurely breakfast. Just wanted to laze around and do nothing. That was just a wish. We had to pack our stuff and push our luggage to the tour manager. We were going to Pahalgam. But wait, we had not done our Shikara ride yet? That was the plan for the first half of the day. We had a fantastic morning in store for us. We assembled at a small pier. At Rs. 300 per head many of us had a go at water surfing.

We have to stand atop a small plank which is tied to a pair of ropes. This will be pulled by a motor boat taking us for a spin around the lake. With no safety gear it was a risk… but that’s the fun part. This was followed by a 2 hour absolutely relaxing ride on a Shikara – a small covered row boat with wide tastefully decorated seats. We will be going around the Nagin Lake free of any disturbance for the next two hours … so I thought… I have heard of going to market… but never heard or seen market coming to us. This is exactly what happened. Just as my lids were drooping somebody nudged me and wanted to peddle some stuff.

I literally fell off the boat. Another Shikara had noiselessly glided next to us and my wife was busy negotiating! I felt as cheated as a Kingfisher who thought it had caught a fish but had weed in its mouth! For the next two hours we were accosted by wares as varied as wooden handicrafts, Paper mache, Jewelries, Cloth, Flowers, seeds…you name it. Instead of fighting them, I did the next best thing…I joined the shopping frenzy. I was to later rue this decision. I bargained a “Walnut wood” handicraft and later found in Pahalgam market that the same stuff was available for 1/5th of the cost! I should have done one of two things …either not buy at the floating market or more importantly not enquired the price in Pahalgam market! …a case of curiosity killed the cat? 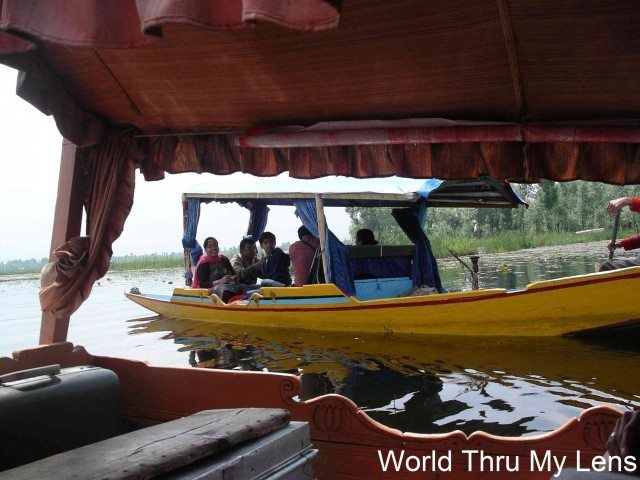 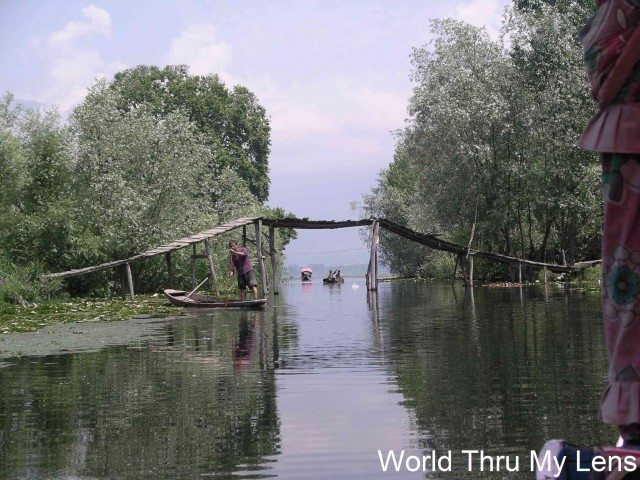 After lunch, we started for Pahalgam approximately 96 KMS from Srinagar. Our buses were parked outside the city as buses are not allowed within the city limits during daytime. Local vans were arranged to transport us to our buses. All of us were much more relaxed after the Shikara outing. Enroute to Pahalgam we passed Saffron plantations at Pampore. Saffron farms are unique to Kashmir valley and does not grow anywhere else. (Saffron was selling at Rs. 200 per gram).On the way, we stopped at the cricket bat factory. This place is famous for Kashmir Willows. These bats are used till the Ranji level in India. We passed the ruins of Avantipura temple built by Raja Awantivarman. We stopped at the Sun temple (not the ruins) before proceeding to Pahalgam. 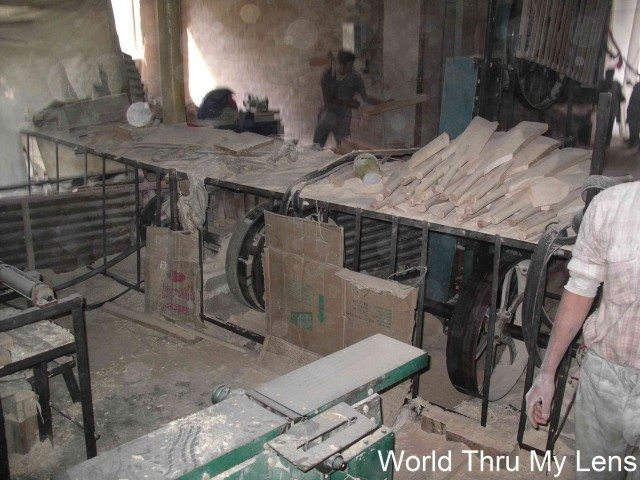 Pahalgam is one of the tehsils of the Anantnag district. We reached our resort late in the evening. We were warned of unpredictable weather in Pahalgam. Our resort was nestled amongst the hills and was decently maintained. In winter, Pahalgam gets inundated with snow. The snow has retreated to the greater heights during our visit. The melting snow contributes to the Lidder River which flows around Pahalgam. One can discern the purity of the water as it descends majestically from the heights. 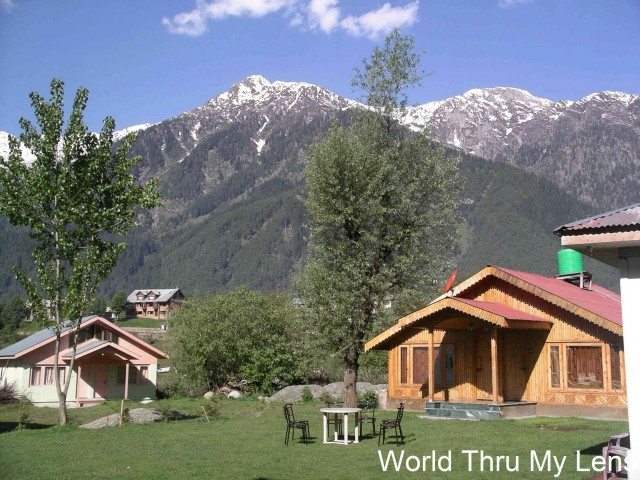 The night suddenly turned cold. We turned in early to shake away our exhaustion.

The morning was chill but pleasant. After breakfast, we hired local jeeps to reach Chandanwari and Aru Valley. Each is at a distance of 12-16 KMS from Pahalgam. The road to Chandanwari is rough and is not well developed. But the local boys knew how to maneuver and do maximum speed in the narrow roads. On the way passed Betab valley which was stupendous. Many popular Bollywood movies have been shot here. 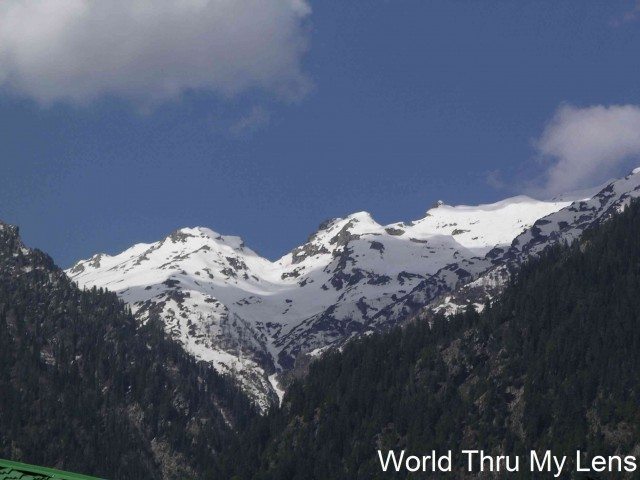 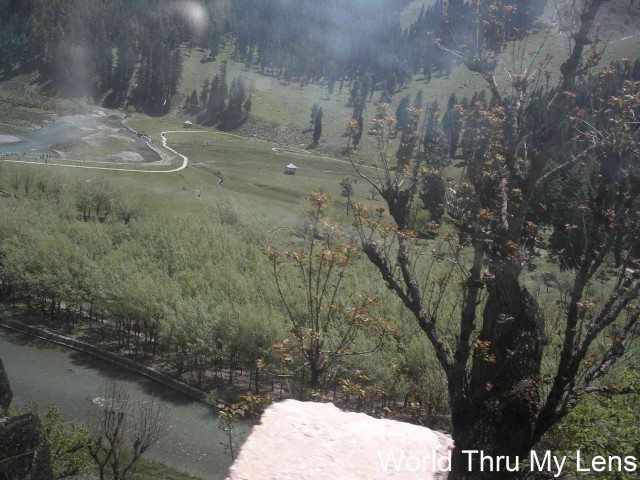 It is worth noting that Pahalgam is dotted with meadows and Pastures with tall pine trees which make it very picturesque. We reached Chandanwari, which is also the base station for the Amarnath Ji yatra. Amarnath is around 32 KMS from here. The snow still had not melted and offered a good background for photography. 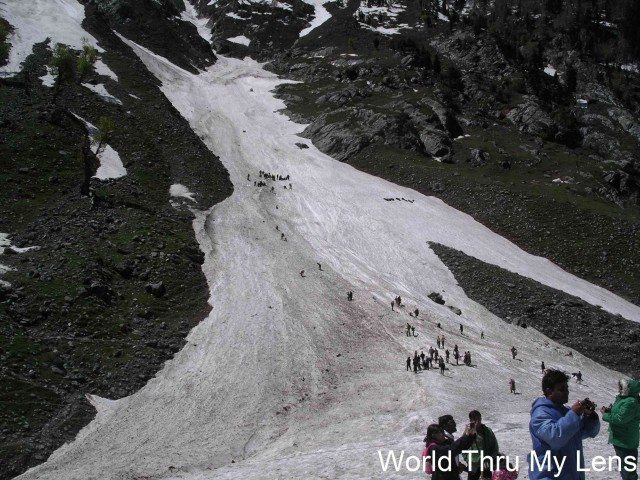 From here we headed to Aru valley. The road here is much better. Along the road one comes across well-kept meadows and identified areas for day picnics. We did not spot brown bears but it is a local inhabitant in the pine and cedar forests of the region. The Lidder river kept us company all along the route. Its rushing waters winding through the Pine trees, amongst the backdrop of the Pir Panjal range and bright blue sky gives you a feeling of absolute serenity. This is a place where the journey is equally beautiful as the destination! Aru valley is a cul-de-sac. The road ends here and the green meadow takes over rising and falling gently like a wave in an ocean. The meadow smoothly transitions into the mountains over the horizon. 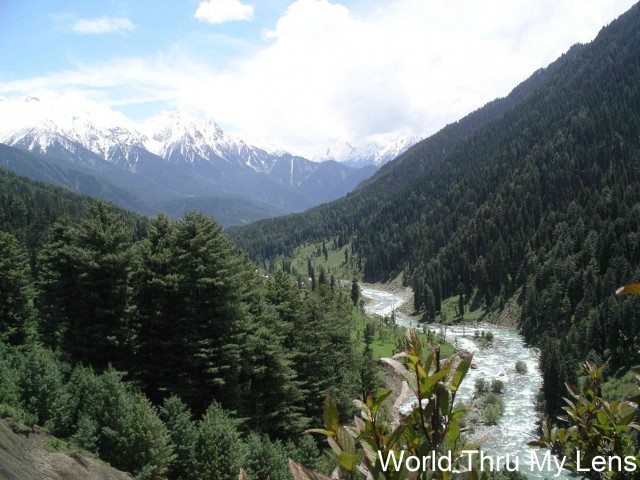 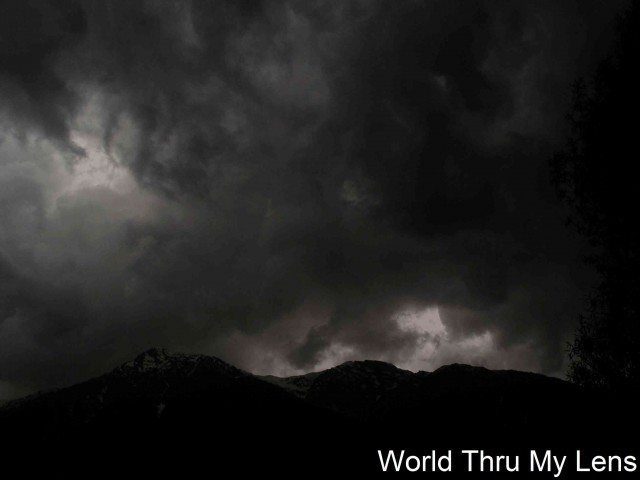 In the afternoon, we had two options – either take ponies and visit “mini Switzerland” and other local spots or take a walk to the local market for some shopping. I chose the latter. Is there a better way to cherish memories? The local tehsil has developed huge parks on either side of the road and they are very well kept. The market is itself a long stretch of road with shops on either side. Though the structures could be better maintained, given the natural settings everything looks beautiful. I found Pahalgam to be more affordable compared to other areas we visited. I was fascinated by “Feren” or the local outfit worn by males to keep the cold at bay. I was voted out from buying – both by friends and family alike. The long walk back to the hotel with roasted sweet corn laced with lime and masala is still fresh in the memory! 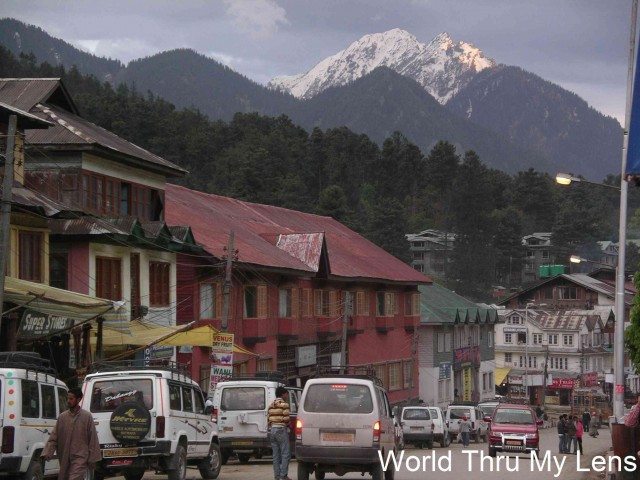 Our next stop is Katra – rendezvous with Ma Vaishnodevi. We have to push our packed bags outside our door by 10.30 PM and get up by 4 AM. Not much sleep tonight….