After an early breakfast we proceeded to our first stopover – Hazratbal Durga, an ancient mosque with a rich history. It is going through a facelift as some modernization efforts have been undertaken. Women were not allowed inside. An army personnel stationed outside was gently telling the male visitors to cover their heads with a scarf before proceeding to the Durgah. The silence inside was palpable. A wizened old local man appeared from nowhere and told us about the importance of the place. Ancient emperors, the past and the present chief ministers of the state and former Prime ministers of India including Pandit Nehru have visited the Durgah, He pointed to a glass dome high up in a small balcony in the hall and added that a hair of Prophet Mohammed is housed in it and is displayed once a month for the public.

Our next stop was Sonamarg, around 83 KMs from Srinagar. Sonmarg is situated in the Sindh valley at a height of 8950 feet. The snow clad mountains over the horizon that we got used to by now was like the clouds in the sky. Something that you could see but not touch! Things were going to be different today. As the bus raced towards Sonamarg, the group burst in to songs. We had some accomplished singers amongst our midst who doled out some choice Bollywood songs of yester years. We stopped at a small hamlet for mid-morning tea. Surrounded by tall hills, with a stream flowing very close to the restaurant cottage, dotted by Chinar and pine trees the place was very scenic. A low mist hung around the area giving it a romantic feel. There was a nip in the air and we had to rush for our warm clothes. It was a perfect welcome to the place where we were heading to. 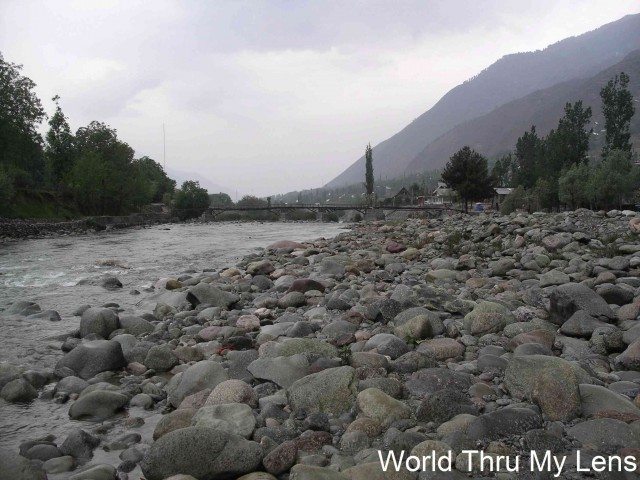 Place where we stopped for mid-morning Tea 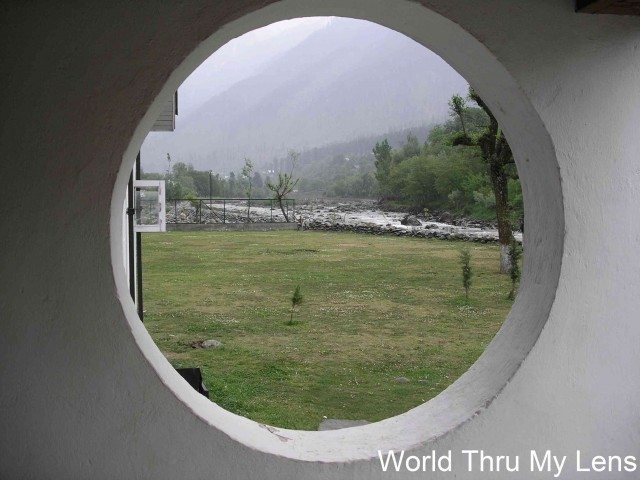 Around the little hamlet

We finally arrived at Sonamarg. There was a small marketplace to cater to the tourists. Our cooks were ahead of us and ready with a steamy lunch. We had to now shift on to Tata Sumos for the onward journey. We were heading towards Thwajiwas glaciers and had to negotiate mountainous terrain. Before heading out all of us “rented” warm overcoats and boots from Sonamarg.

The Pir Panjal range is ….hypnotizing. The blue sky, the white snow decked mountains, the melting snow starting as a little brook pushes downwards clearing the rocks in its path and forming a larger stream rushing faster and faster trying to keep it’s appointment with the ocean and creating a musical gurgling sound in its wake …the little pebbles, the smaller and bigger rocks, the tall trees interlaced with green grass carpets … all seemingly part of a grandeur heavenly design. Our vehicle has stopped and I had stepped outside trying to assimilate with all my senses nature’s gift to mankind. 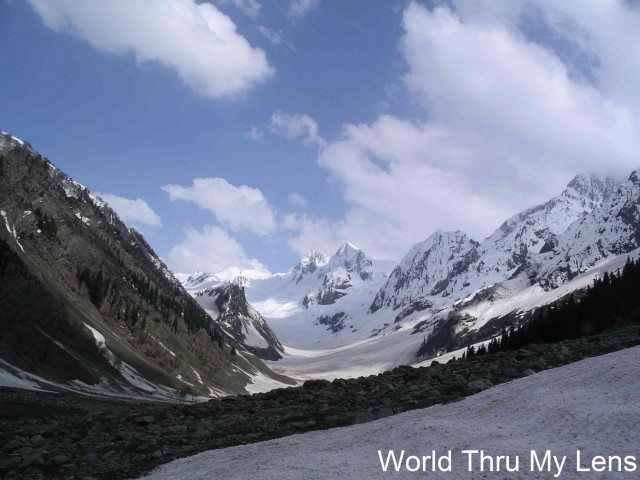 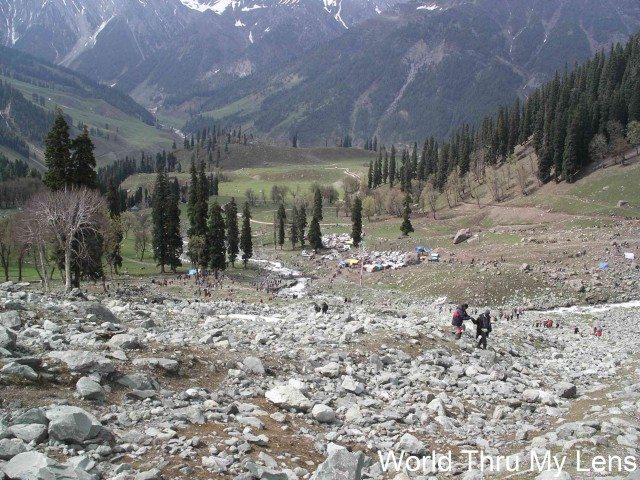 Sonamarg – View of Parking from the Glacier

We had to trek uphill over rocks to reach the tip of the glacier. The reward – play on fresh snow and come sliding down over a sled … tempting …. My wife and older daughter took the longer route on horseback. I decided to climb along with my 8 year old daughter. Even the trek of 2-3 kms is tiring. Our breathing becomes laborious. Fortunately, I hired the locals who put my daughter on a sled and dragged the sled up the glacier. I met the locals at the agreed point. Meantime, some of my friends also joined us. I probably spent more time balancing myself on the steep glacier than enjoying the snow! Going downhill on the glacier was exhilarating! 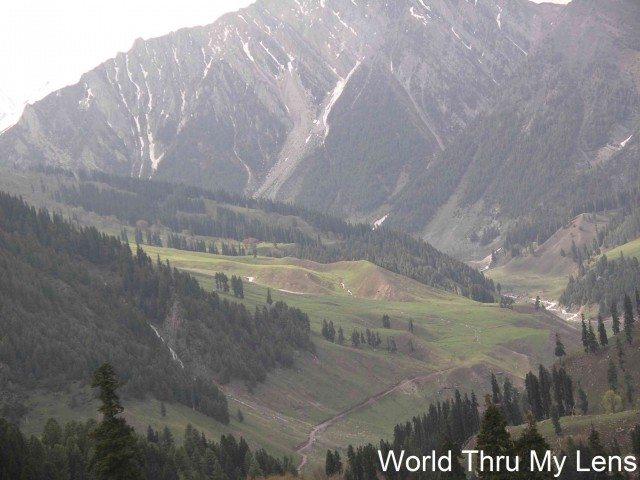 Sonamarg – View of Meadow from the Glacier 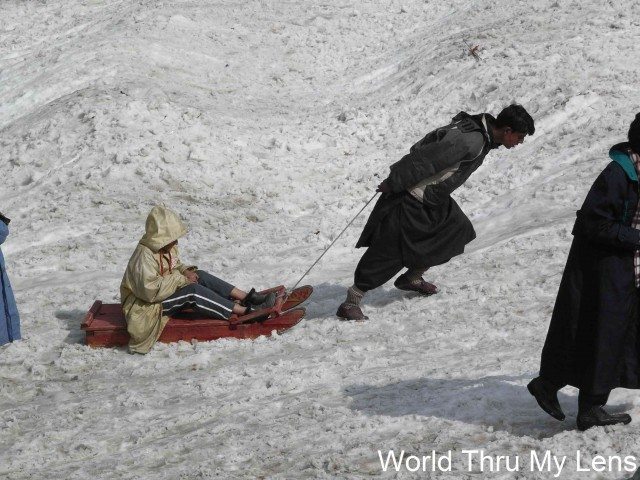 Sonamarg – My kid getting pulled up on the Sled

Sonamarg – View of the Glacier

By the time we reached our bus we were thoroughly exhausted. Someone in the group got lost in the wilderness. He probably will have a tale to tell to his grandchildren! All the energy and enthusiasm has waned by now and we just snoozed all the way back to the houseboat. We reached the houseboat around 10 PM in the night. No time or energy to explore. Have to wait till tomorrow …..zzzzzz

18-May-2012 DAY 4
I got up early to explore the houseboat. The houseboat aptly named Shangrila had 8 bedrooms on the first level and a huge bedroom on the second level. The boat itself is made of Cedar wood and has elegantly carved interiors. With built in bathrooms in each bedroom and plush corridor, a huge common sitting room and dining area and well carpeted floors, the houseboat had all the luxuries of a modern hotel. British were allowed to own Houseboats but not land during Mughal times. That practice probably continued till the early 1950s. Our Houseboats were in Nagin lake – a comparatively smaller lake than Dal lake.

A view of Nagin Lake 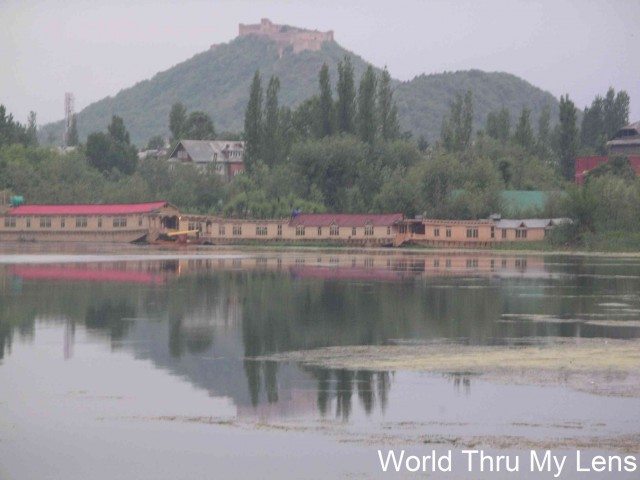 As I stepped out in the early morning to take a look at our surroundings, the tranquility of the place was invigorating. All the lakes in Srinagar are abound with different varieties of Kingfishers. You could spot them easily swooping down to catch fish.

Today our plan is to visit Gulmarg. At a distance of 55 Kms from Srinagar we will be reaching the highest altitude of 10,000 feet and above during our tour. This was our fourth day of continuous travel and it started showing telltale signs amongst the group. We had cases of motion sickness, heavy headedness et al. Higher altitudes do have its effects but modern medicines had an answer to all these ailments. We had kids 4 years and up in the group and they would be and running early morning however grueling the previous day had been. 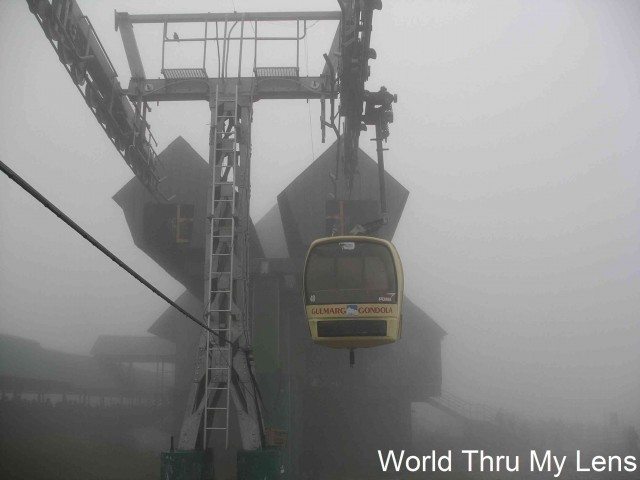 All along the route we could see the presence of military. Suddenly the traffic stopped at a junction. The road ahead was clear but we saw some of the vehicles ahead of us take U-turn and head in a different direction. At a distance we could see Khilanmarg engulfed in mist. After 10 minutes of wait all of us got down. On enquiry we were told that few km down the road there was a traffic jam. As suddenly as it stopped the traffic began to move. We stopped at Tangmarg to pick our overcoats and boots. When we reached Gulmarg we had our lunch. The altitude was not helping. I for one skipped my lunch. I was feeling heavy headed. I took a paracetamol to clear my head. We walked around 2 Kms to reach the Gondola ropeway base station. Fortunately for us, our tour manager had arranged our tickets. There was a serpentine queue to just get the tickets. Every once in a while there would be an announcement that the Gondola has been stopped. I believe this was done to wait for the “return cars” from Khilanmarg. There was confusion whether we should be standing in the queue. Some of just pushed ahead and joined a different queue. Some of the ladies had brought Camphor on the advice of their doctors… helps breathing at higher altitudes …so they claimed. The Gondola, with a capacity of 6, keeps on moving. One has to quickly enter and exit. We reached 10,050 feet. It was cold and the visibility was poor. We could hardly see beyond 20 feet. Our plan was to reach 13,000 feet by taking another Gondola. The weather was bad and the next level Gondola was suspended. We spent some time exploring the place and returned. 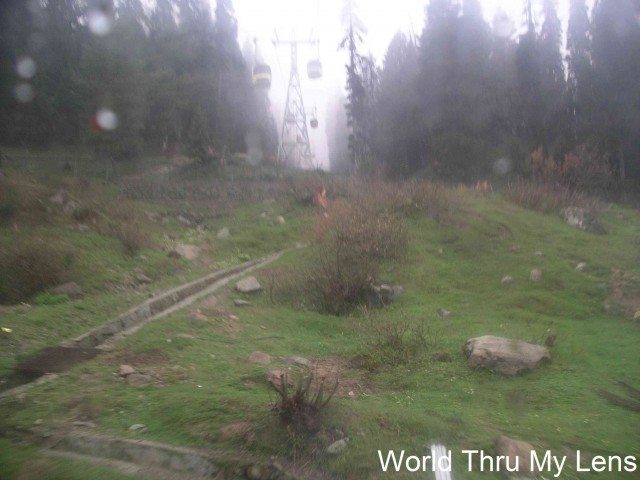 A view from Gondola

By now the weather had cleared a bit and we could see a well laid out Golf course (probably a 18 hole). With no energy left, we took a horse ride back at Rs. 150/- per head. We reached our houseboats around 10 PM and crashed too exhausted. Enough of mountains and snow …..or so we thought..

Riding the waves in an old wooden boat on the unpredictable Indonesian sea is exciting. While I sipped coffee, the crew got busy with…