Well, this being my first post on Ghumakkar.com, I would like to dedicate it to the memories I collected during my honeymoon trip to Himalayan Queen Darjeeling. I got married on Oct 5, 2009 and as it was preplanned, we had to proceed to Darjeeling on 11 Oct, after visiting and taking blessings of Mata Vaishno Devi. We came from there on 9th and after one day’s rest we came to Delhi as our flight was scheduled on 11 Oct, 12:30 pm. We had got our tickets confirmed few months back with a very good and budget offer. Thanks to Kingfisher Airlines.

11 Oct, 2009 – We reached airport one hour before flight time for all checking and other formalities. While roaming on the airport premises waiting for boarding call, I suddenly saw someone whom I knew very well but could not recognize at the moment and when he passed me, I suddenly shouted  ‘Ajay Devgan‘. He was there on the airport also waiting for his flight to be scheduled. My husband was making fun of me later for first not recognizing him and then shouting his name :)… Soon after few minutes there was a boarding call and we boarded our flight. As I was flying for the first time, I was both excited and nervous at the same time.

The flight was till Bagdogra which is the nearest airport to Darjeeling which is almost 94kms and it takes nearly4 hours to reach Darjeeling. We reached Bagdogra by around 2 pm and started moving to Darjeeling by taxi we hired from Bagdogra airport. As soon as we passed through Siliguri there were tea gardens on both sides of the road and after some time we were climbing up the mountains leaving plains behind. Roads to Darjeeling are not much developed and some times you come across many scary and steep turns. Thanks to our Driver Shingye Tamang for his experienced driving skills. We passed through beautiful valleys, cloudy mountains, green woods, Darjeeling rail tracks, having world famous Darjeeling Tea and yummy momos. We reached Darjeeling by around 6 pm.  Weather was amazing as it was raining lightly. We had our room booked in Hotel Sonar Bangla which is easily approachable. The room we got was also perfect as we could admire deep and beautiful valleys of Darjeeling, buildings decorated with prayer flags and mighty Kanchenjunga clearly from the window.  We had dinner in the hotel only and since we were a little bit tired so we decided to remain in the hotel and retired to bed.

12 Oct – Next day, we wake up lazily and after getting ready, we head on to roam around the city and stated with a  hunt for breakfast. After asking some people, we reached Hasty Tasty  Restaurant located on Nehru Road which proceeds towards famous Chowrasta of Darjeeling. Being Punjabis, both me and hubby love to have paranthas and punjabi food, so we ordered Aaloo Paranthas with curd followed by Darjeeling tea. After that we moved towards Chowrasta, as the day was beautiful and sunny, we decided to sit for sometime on benches there ans bask in the beautiful sunlight and  feel Darjeeling air and just roamed around the market nearby. In the evening after lunch we visited Padamaja Naidu Himalayan Zoological Park where I saw Red Pandas for the first time and they were just adorable, then we headed towards Natural History Museum which has a collection of over 4300 specimen, then to Tenzin Rock and last point was Happy Valley Tea Estate. The tea estate is astonishingly beautiful with deep green valleys and amazing tea gardens, totally a treat to the eyes. We had some photographs there, had some tea again and bought some tea packs for home and returned back to Chowrasta where some cultural festival was being organized which we enjoyed very much. We enjoyed having  chicken lollipos and veg buns  form some side vendors near Chowrasta. Then we took some photographs, visited some shops nearby, had dinner and returned back to our hotel.

This collage of photo graphs will take you to a virtual tour of Darjeeling…. 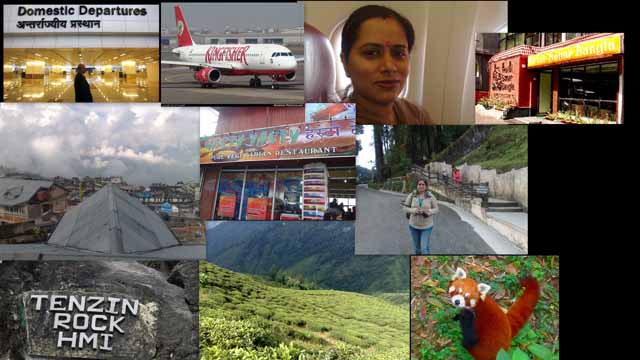 My Honeymoon Trip To Darjeeling – Part 1 was last modified: April 3rd, 2020 by shefali26

This video has been created by my daughter Vrinda (7 years), we call her Kuhu at home, and my niece Pihu (12 years). We love to go on road trips and many a times it gets difficult to keep kids entertained while one is on the run. In this video, Pihu and Kuhu share some of the games that we love to play while travelling. Most kids love these games. These can be played with grownups as well. Each of these games is educational game in it’s own way.