I woke up well before sunrise to admire sunrise in the hills and took position at a vantage point. Kalpa is pretty popular with Bengali tourists and there are hotels catering exclusively to them with signs written in Bengali. Many of them were up and ready to look at the sunrise. The entire hour or so from initial light to complete immersion of the valley in sunlight was like a light show with many hues from orange to blue and the sunlight diffused by the mist. Once sun was up there was an urge to have a hot cuppa so I climbed down to the Kalpa village. But there was no shop open as yet. took a round and found a stall open. 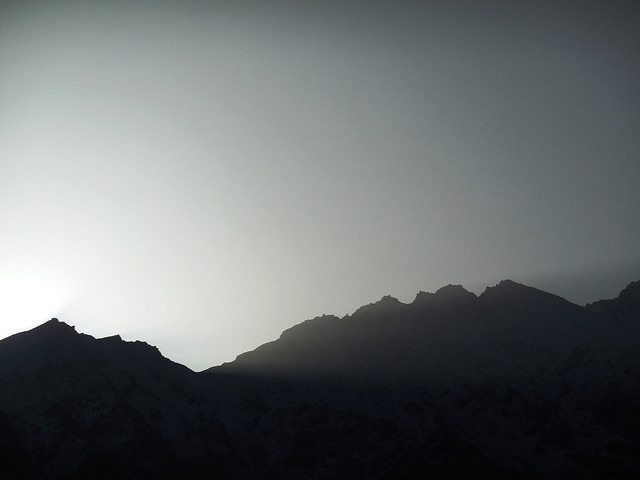 After readying up we went to visit Reckong Peo this being a free day for us. We first went to Monastery of Mahabodhi Society which has a huge statue of Budhha and lots of flowers. Watching the statue against the backdrop of KK range was gorgeous. After that we went to a couple of Tibetan/Buddhist and Hindu temple which are adjacent. They both had typical small structures with intricate wooden carvings. After that we went for walk and shopping in local market. We bought some Kinnauri Rajma, Walnut, some herbs and woollens. In the evening we went to suicide point or windy point which is on the way further than Kalpa on the road to village called Roghi. The place has view of deep valley down below and its quite a windy place due to hills around. That ended the day for us in Kalpa.

After returning from Spiti tour this time we stayed at Bridge View Regency on the Mall Road, steps away from HPTDC Lift. The location was nice and easy if one has to roam around Mall Road and Ridge but a little away from Heritage structures of Shimla. The hotel itself has weird layout where one has to climb steps before/after lift. Thankfully we got a room with great view of entire main Shimla. The hotel had things lacking one of them was availability of water. Secondly, there was no ceiling fan or AC as probably the time the hotel was built there was no need for fans but now with hotter summers even in Shimla, they have provided only table fans. Lastly, their breakfast buffet was disappointing, no fruits or juices, only oily poori/bhature with aloo/chana and bread sandwiches with either boiled egg or omelette, no eggs to order. We had better breakfast at lesser equipped places in Spiti.

Finally in Kelti it was transformation. There was a cellular tower standing right in front of house where we used to stay and the building added more rooms above and in front. Now there was a new motorable road upto Kelti from backside which was non-existent at that time. Houses had cars parked in front! Though there was familiar silence and sound of wind which I experienced at that time but still lot of construction unsettled me. Even in the valley down below which used to have only trails now seemed to have paved paths and there seemed more houses and fields in the hills on the other side of valley. There is a temple called Dhengu temple which is on a hill above Sanjauli. I remember me and my father walked to that temple on the day next to Rajiv Gandhi’s assassination when all govt offices were closed. It was still there but now it had a red colored ugly looking tomb. Having nobody to meet per se, I left the place with mixed feelings.

Next day we decided to visit some heritage attractions which surprisingly I didn’t visit when I used to be here in early 90s. Perhaps because that time there was no information or interest. We took a cab to Viceregal Lodge which is on Observatory hill. Its a grand structure with great gardens in front and the back. The front garden was full of flowers and plenty of butterflies. The rear gardens are more relaxed where visitors can sit on grass. There is a HPMC outlet selling juices. The interiors are grand and the entrance hall is completely wooden. Lot of important decisions regarding India’s independence and partition were carried out here. Nowdays it house Indian Institute of Advanced Studies which has research programs in humanities and liberal arts. Looking at the location and solitude its a perfect place to research on these topics. There are guided tours here which run at intervals of 45 minutes with entry fee of Rs. 40/-. They take you through 3 photo galleries and view of library and main entrance. From there we went to Himalayan bird park. It had birds found in Himachal though not very impressive collection. Mostly it had hen/cock and pheasants. Then we came to Himachal State Museum. The building is tucked away up in the hills and there is a steep, long climb to get there. However, it is worth it as it has many items in display both from Himachal and outside like sculptures, paintings, arms etc. Then walked upto Mall Road via Vidhan Sabha and other official buildings. This part of Shimla is silent and quite walkable. Once the Mall road started solitude gave way to crowd.

This was complete three train journeys over 2 days. We started with Kalka-Shimla Himalayan Queen Express @ 10:30 am. The journey though seemed to be long but soon we were enjoying. There was light drizzle in the later part of travel. The best part was the moment train arrives the solitary eatery comes alive with people extending hands furthest to be served first.

Kalka to Delhi was by Shatabdi with same standard food and service. At New Delhi, we were taken at platform 1 and had to cross 16 platform and more to reach Ginger Yatri Niwas. Tired from day we were looking forward to sleep but had to wait for 30 minutes as rooms were being cleaned. Apparently, they over book passengers including day guests and allot rooms as and when available. Though the room themselves are quite reasonable for the price and efficient.

Next day we took a cab from Yatri Niwas to Hazrat Nizamuddin and boarded the train. The return journey was nice with company of families with kids.

We walked to the rocky path to the top point in the evening there we could see the Shiva Temple. There is a Rock with a hole and it is believed if barren women enter this hole they will have children. It was a thrilling experience at the temple and the nearby Suicide point where we stayed quite some time seeing the Sun set and the moon rise and the chirping of birds of different kinds.

A sort of Red flowering plants could be seen all over. The red flowers seen is Brass/Buransh is the Pahari/Hindi name of Rhododendron Arborium. Its Juice is said to be good for reducing Cholesterol. The Oils extracted is good for Skin. There are hundreds of such medicinal plants here. This plant is seen all along the way up mingled with other flowers of different kinds. These preparations are available at Haldwani but not on top of the hills.