From the mighty lake Bhimtal till Kathgodam the road was good with few patches, and we were descending that time from the hills. Maximum stretch of the road was a descend with huge traffic from the reciprocal course. Though it was still a hill terrain but unlike the whole Kumayon characteristics of numerous u turn and hair pins, may be because of the psychology of mine to found that a easier road as we were coming down from hills. It was a relief from those sloppy road indeed but personally I felt sad to left those virgin beauty of clear mountains. As the plain became nearer the climate grew hotter and I was taking glimpse whenever got chances to release attention from the incoming traffic, of the smoggy city far down below.

Soon after we came down to the plains and from Kathgodam, left NH109 to take a diversion to the left, to avoid the congestion of Rampur near Haldwani. We completed our breakfast there. From there the diversion merged into NH 109 at Patwadanagar, Haldwani which continues all the way upto “Bilwa” near Bareily and took a diversion of a unnamed road like a patchy village road of around a kilometer to take the smooth Bareily Bypass,i.e. NH 530, which joined to NH 30, a continuation of the bypass. From “Katra in Uttar Pradesh the main stretch of NH 30 goes through “Sahajahanpur”, “Sitapur” to reach Lucknow instead we took the “Jalalabad”, and “Sandi” to merge with “Lucknow-Agra Expressway” from “Newal”.

NH 109 was quite good except few places of road construction and for Bariely Bypass and all the way up-to the “Lucknow-Agra Expressway”, the highway was extremely smooth except few places of market and locality. The last 50 kms through expressway to reach Lucknow was a bliss like before. In the midway we completed our lunch in a eatery near ” Bilgram Police Station” around 35 kms before Expressway. though it was not so decent one but managed as it was already passed midway.We reached our destination, “Hotel Megha By SSJ” near Charbag station area at Lucknow around 1530 hrs on 27th may.

The hotel had a decent interior and calm inside contrary to the very hot and clumsy station area out side. The railway station was very near in a walking distance and all shorts of traffic, crowd, auto rickshaws were making the place hotter. We took rest for three hours before we went for famous “Hajratgunj Market”.

We did some shopping of special Lucknow garments famous for its “Chikan” embroidery in the humid evening. While returning I must remember about a place where we finished our dinner, “Dastarkhan,” a nice place for the food of “Nawabs”. Specially the types of biriyanies and Kababs. 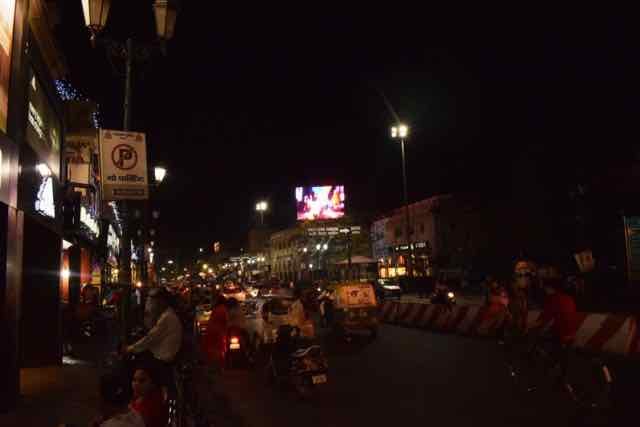 Morning of 28th May had a busy scheduled plan for us. Though we had that night stay at Lucknow but “the City of Nawab” is worthy and much graceful for the sweat to flow down in the hot summer. We started in the morning just after breakfast at around 0830 hrs as most of the visit places were not open before that. In the list, first was “Rumi gate” and some other famous places nearby within walking distance.

Rumi Darwaza was one of the architectural projects taken up by the fourth ruler of Awadh, Nawab Asaf-ud-Daulah, as part of his relief operations, to provide work and help to the famine affected people in his state in seventeenth century. The gateway is believed to have been constructed over two years.

The “Rumi Darwaza” goes upto a staggering hight of 60 feet. The uppermost part comprises of an octogonal umbrella carved beautifully.

The Bara Imambara of Lucknow is one of the most famous monuments of the city, after the name of the Nawab of Lucknow who got it constructed, it is an important place of worship for the Muslims who come here every year to celebrate the religious festival of Muharram. The Imambara is specially known for its incredible maze, known as Bhul Bhulaiya locally, which is located in the upper floor of the monument.

Said to be the world’s largest unsupported structure, Bara Imambara is considered a marvel of engineering and a fine specimen of Mughal architecture. The Bara Imambara has a unique style of construction. The central hall of Bara Imambara, which is said to be the largest arched hall in the world, measures 50 meters long and goes up to a height of 15 meters. The whole building is made of a special kind of bricks called “Lakhanui”, which are a bit small in size, and lime plaster. No wood or metal has been used in the construction. One can also have view of the grave of Nawab Asaf-ud-Dowlah and his crown, which are kept in the central hall.

The famous “Bhulbhulaiya” is a unique place to see, from every junction of way goes three wrong ways and a right. The guide first tests us and at the end gave a hint that if one wants to go downwards then have to take the single distracted way which goes comperatively upwards and vice versa and it worked I suppose. The walls are highly conductive ,as one can even listen a wisper from very far which also made justified by the guide.

He also told us the story of drought followed by a famine at the long gone time when Nawab decided to contract the structure to feed his people by paying. Inside the large enclave a mosque was there and “Sahi Baoli” on the other side.It was constructed around a large well that had been initially dug as a reservoir for storing water for construction work near the Imambara. it turned out to be a perennial source of water, being connected underground with the river flowing nearby.

The total “Imambara” experience was just fine except a thing to add from my side, there were numerous ticketing system to travel inside the monument rather to fix in a single or two.

The Chhota Imambara, or the Imambara of Hussainabad is one of the most beautiful and attractive buildings in the old city. The imposing monument lies to the west of Bara Imambara. Chota Imambara was a congregation hall for Shia Muslims built by Muhammad Ali Shah, the third Nawab of Awadh in 1838 and was to serve as his own mausoleum and his mother’s, who is buried beside him. This 19th century building is also known as the palace of lights because of its decorations and chandeliers during special festivals.Chota Imambara is often touted as the most prominent historical structure of Lucknow by many locals.

Architecturally, it is a wonderful amalgam of Charbagh, Indo-Islamic and Persian structural designs.The interiors are designed and maintained with intricate details and utmost care.

Not far from Imambara, the “Husainabad Clock Tower ” was built in 1881 and since has been the tallest clock tower in India. It is 67 meters high, displaying Victorian-Gothic brilliance with a 14 feet long pendulum and a dial in the shape of a 12 petal flower.

“Satkhanda” was the next, which was near by and we decided to had a look. “Satkhanda” means seven storyed but the monument was constructed upto four and later on abandoned but still a splendor for its architecture and obviously historically.The tower was constructed by “Muhammed Ali Shah”, the brick tower got influenced by great leaning tower of “Pisa” and Muslim influence. It’s framework and pediments reflect Greek structural design whereas arches of the gates and windows show influence of Islamic structural design.

It was around 1200 hrs with a blazing sun on the top and we were much exhausted to roam a little more so decided to touch “The Residancy” and “La Martinear College”.

At 1775 “The British Residency” was constructed for the british residents on 33 acre of land where only northern part of the houses were called “Residency” but after the battle of 1857 the whole area termed as “The Resedency”.The ruines of “the Residency’ stood apart for the remembrance of great uprising of year 1857 and are preserved in intact condition from the taking over under central protection in 1920.

The ruined constructions here and there all over the surroudings is enclosed by beautifully maintained lawns, flower gardens and abundance of green even in hot scanty summer, Numerous numbers of squirels were running all over.

The Residency, a look back in history

“La Martiniere College” at Lucknow, established in 1845, was founded in accordance with the Will of Major General Claude Martin. Born in Lyon, France, in 1735, the Founder died in Lucknow on 13 September, 1800. The day of his death, by his own instructions is commemorated as ‘Founder’s Day’. The college premises has a beautiful landscape with well maintained structures, a must visiting site for tourists.

It was around 1330 hrs when we completed the places and headed for our hotel, which was not very far. Had a lunch and in the afternoon went to the tomb of “Saadat Ali Khan”.

Just almost opposite the tomb was “Begam Hazrat Mahal Park”, which was build in the honour of a beautiful and courageous woman, dated back in 1962. The state government build this monument to be remembered for her contribution in 1857 revolt. The marbled monument constructed inside a soothing green park inside the city. A relaxation from a hot afternoon.

Our next place was “Ambedkar Memorial Park”, which was constructed by Mayawati Government in “Gomti Nagar”, well, apart criticism, with a whooping 7 billion rupees approx.The park was built to glorify those people who dedicated their lives for equality and human justice like Dr. Ambedkar, Kanshi Ram and others. Numerous marbled structures with so cleaned reflective floor silhouetted the construction, backdrop of sunset mesmerized us with the faded hot breeze from the river “Gomti” nearby. 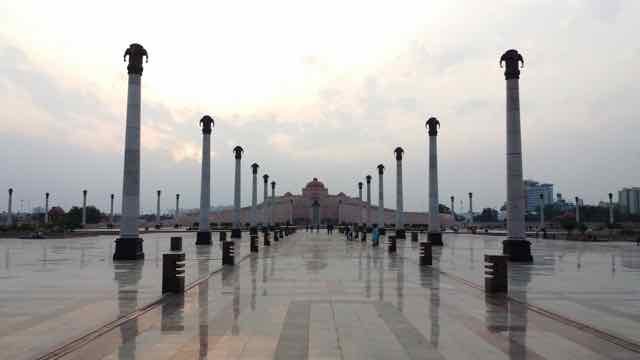 The next was “Riverside park ” at the bank of river “Gomti”. Nicely maintained park. With lots of play areas for kids. We went there after sunset and by lots of exercise managed a parking on the road as the parking provided was full. The park looked beautiful. No entry fee required which attracted huge crowd and many vendors all over. There was a musical fountain and a display of blue lighted river bridge view.

A nice place to hang out in the evening.

Kolkata to Kumaon – At Lucknow was last modified: August 6th, 2022 by Debjit Chakraborty