Now after sharing our main focus in the previous parts of story, I should give some words about the hotel as well. 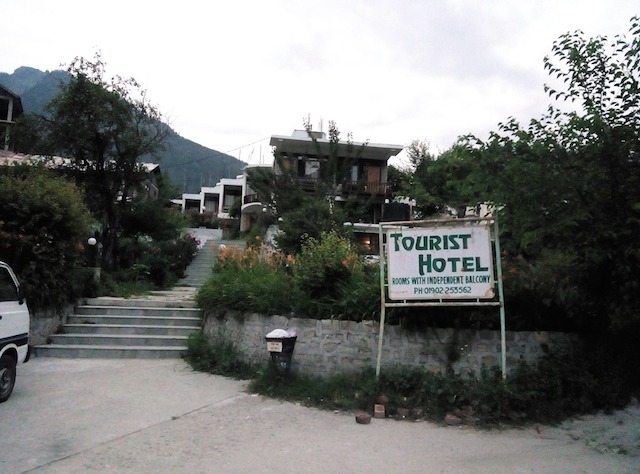 While choosing the hotel, I had four things in mind; Cost, Parking facility, location and good reviews. While the rates may vary over time, Rs. 1150/- per day was quite reasonable for the season even if late of June and one doesn’t expect five star facilities but trust me, there was nothing left to us to wish for.

Narrow route to the hotel

Cozy & clean room, water heater in bath room, really warm soft blankets (not one but three of them), wooden floors making ambience perfectly suiting to the hills. Being at first floor, even if it wasn’t a family suite kind of with balcony but a sofa outside the room with kind of views, one won’t have any complaints either. 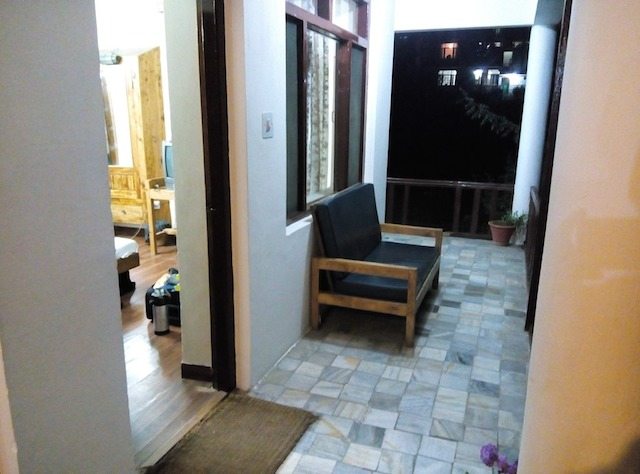 Then comes to hotel staff, we happened to meet only four of them; one at reception, one at Traveldesk, one attendant & one in kitchen. From taking our luggage to room to proving water, serving our orders etc, I had no complaints. They always been detailing as well like our Traveldesk guy suggested us against starting from 2AM than 2.30AM. Informed us about keeping alarms on as wakeup calls won’t be available from hotel side as reception staff resumes by 6AM. The attendant also happily agreed to wash my car by next day at an expense of Rs 50/-.

Overall, services been perfect & location of the hotel was at walking distance from Mall road, while 2km away from Vashisth Temple & similarly short distance from Hidimba Temple. If I had to visit the place again, then I would gladly chose the same hotel again than any other place. Only if there was Beas river around the hotel, then it would have been even great and may be wider road to reach the hotel.

When I thought that best part about Manali was Rohtang along and rest would be boring like many of hill stations, then Manali was to come back on it to tell me that how wrong I was. I was yet to visit Mall road, Vashisht Temple, Hidimba Temple and Van Vihar.

As we had skipped other hot springs in the way, we had to visit Vashisht temple, for which I started by 9.30AM after resting a while & then having bath at hotel. My choice was taking an Auto though wife wanted to continue with car, later on it came out that I was right. A paid private parking in the way informed us that it would be hard to drive further in very narrow street, but I thought that it’s just marketing ploy, just to realize my mistake within mins when I was to hold my vehicle again and again on steep slopes to start again with efforts. Managed to park it only somehow. 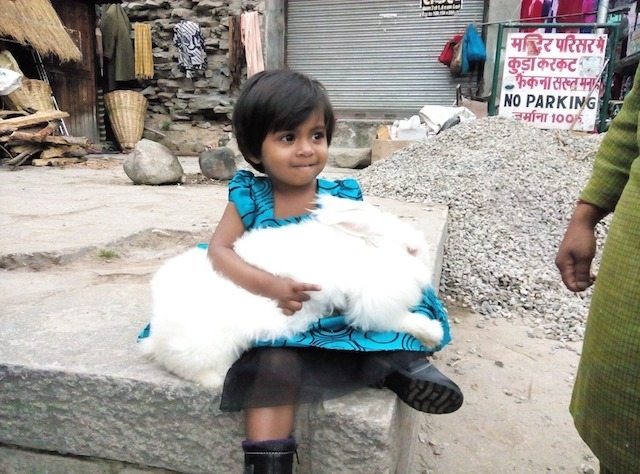 While walking towards the temple, many shopkeepers tried to sell us some sparrow blankets but we walked ahead of them only to find that the temple wasn’t of that spectacular view. Too crowded, narrow place with hot spring. We taken a look over the hot water, which was even flowing outside from the temple and then walked backwards. In the way, we checked out Shawls etc & almost bought Cashew from a roadside shop but left the idea as it didn’t tasted good. We also paid to a local there for giving their Angora rabbit to have a snap. 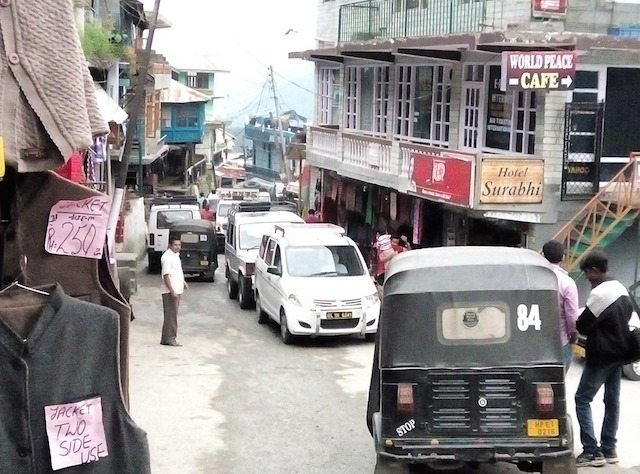 The jam on narrow route to Vashisht Temple

It wasn’t easy to drive back as one truck was there on this narrow road where two vehicles couldn’t pass together and then long chain  of other vehicles, but somehow the saga ended and we were back. It was no point roaming with the car after that experience and we were back to hotel. 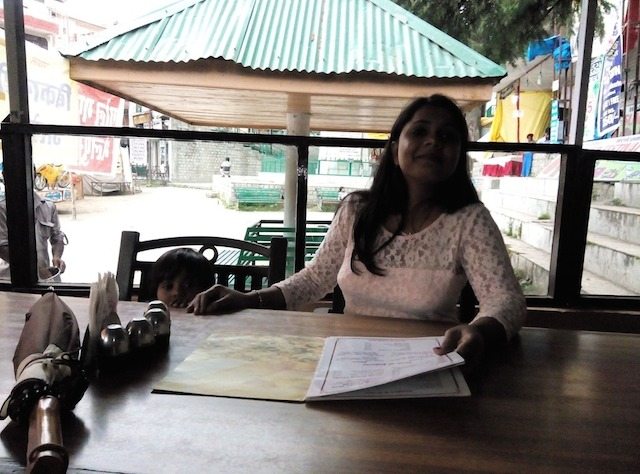 Finally the lunch at Manali

After some rest at hotel, we walked out to have lunch. I took Chicken Fried Rice while wife had a plate. I also thought to give kiddo a ride over Jhulas there but wife warned me against it. We took an auto to Hidimba Temple then (Rs 80/- for just 2km but it was at an elevation like Vashisht Temple). 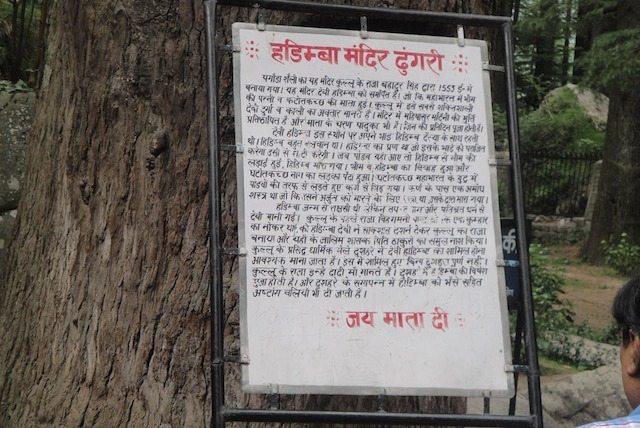 Notice board at Hidimba Temple 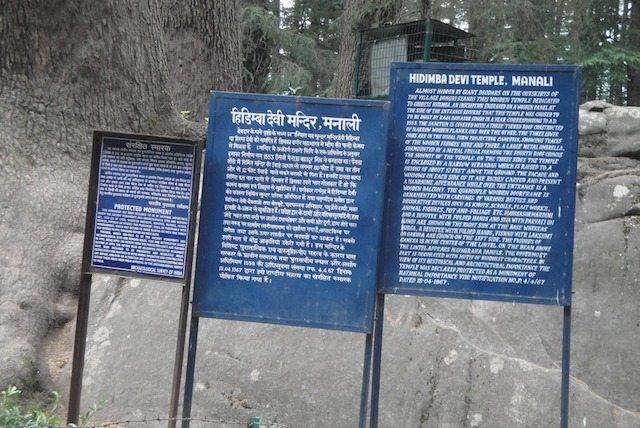 The story of Hidimba Temple 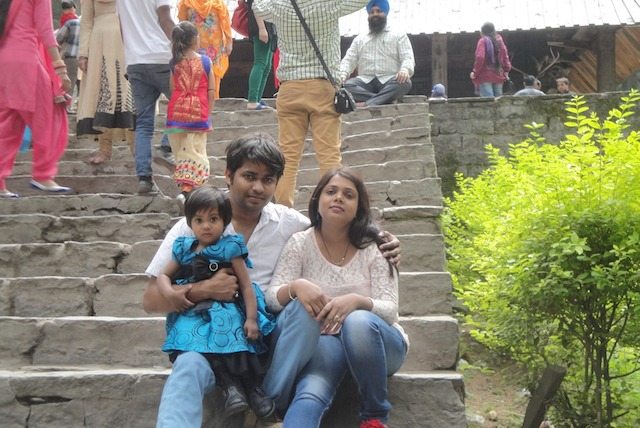 Next stop was Hidimba temple & we were thinking if that also doesn’t come out the way Vashisht temple was, but thankfully that wasn’t the case due to scenic view & pine trees around. Though we missed to keep the mattress with us (it was left at hotel room), which would have been even better as we sat over the grass for a while there as Wife said no to me for walking insider the temple due to non-veg food that I took few mins back. AbsolutelyAbolutely must go when you visit Manali otherwise you seriously missing everything that Manali has to offer. 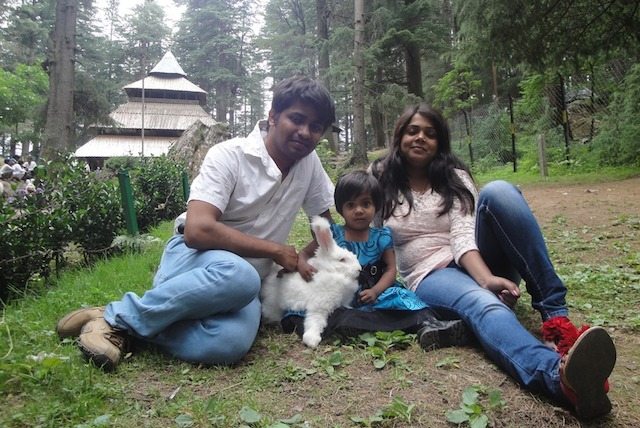 Family Picture with an Angora Rabit

Same Angora rabbits been here as well and kiddo wanted to play with them. Wife had some other doubts in mind about these rabbits that why they don’t run away and why this much lazy against the nature of normal rabbits. But nothing of these had to come in the way of Kiddo and rabbit.

A 360 degree view of trees around Hidimba Temple

We sat there and looked at various couples wondering freely thinking what if we would have came here before the kiddo birth. 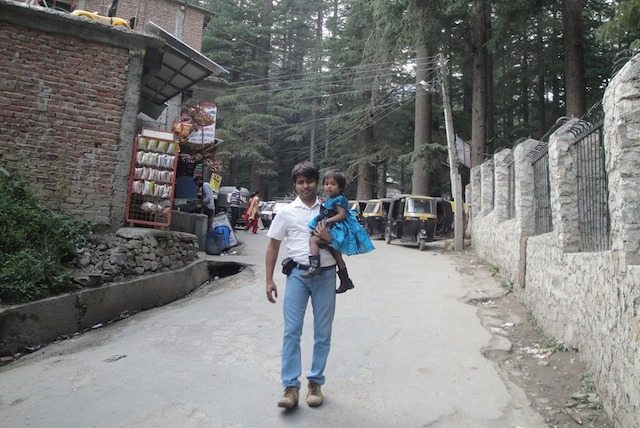 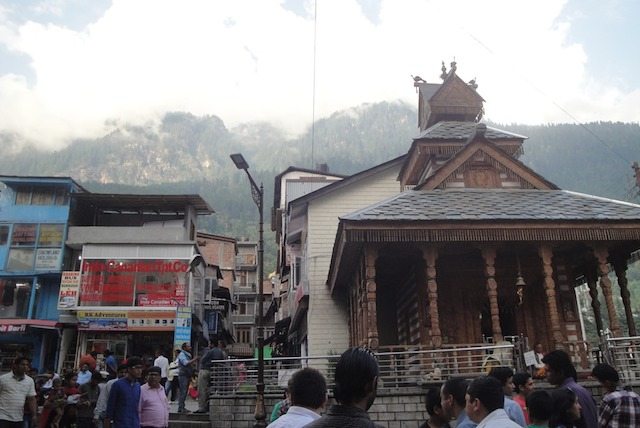 After Hidimba temple, we took auto back to Mall road and then spent a long while there. Rs 100 for 8 pieces of Chicken Momo, a bubble maker for kiddo and similar small items. The view of hills from the mall road was kind of perfect with clouds and little sunshine left of the day. 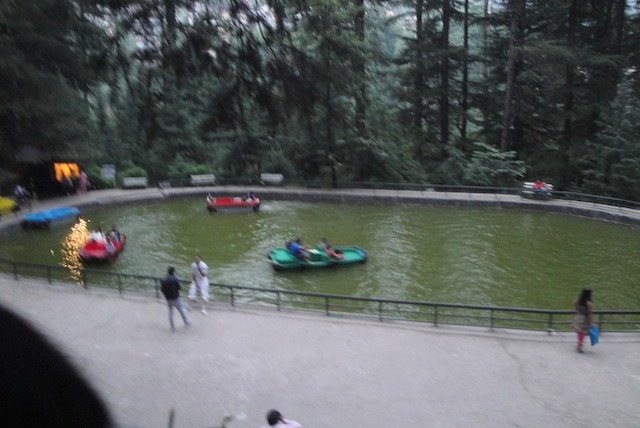 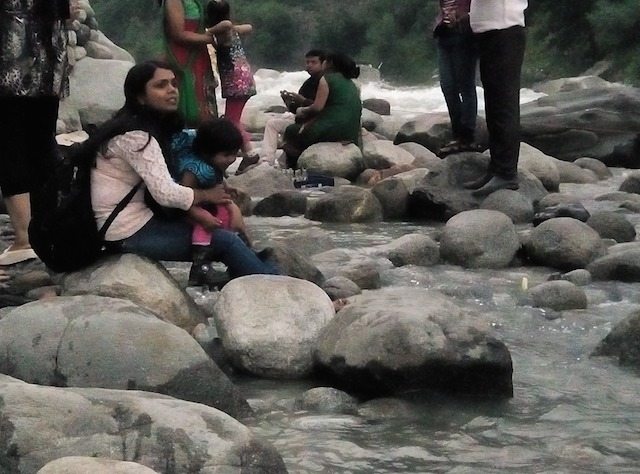 Done with Mall road, we wanted to sit nearby river and asked that which side it might be. Someone suggested us to go nearby park. There was a ticket to enter the park and then it greeted us with lots of Jhulas and Pine trees around. Some better ones were occupied as the place was well crowded. After spending a while, we walked at end of park where there was pool which would have been of interest to us but due to crowd, we left that part. On the riverside, some were offering sports & adventures while people were just roaming around. We took sips of tea and coffees.

While coming back from there, we tried to find Aaloo Paranthas at Mall road but it wasn’t available there and if it was then it was only Tandoor ones. We decided to come back to hotel and take the dinner there only as it was getting late and our plan was to hit the road early as we had a satisfying day so far and rather than spending one more day, we decided to come back and then have a day in hands to take rest before joining office life again.

Hotel food was ok type. No complaints, no special mentions either. So far the lunch we had in Mandi was the best as per taste but we didn’t had much outdoor food in this journey either. The rest was almost eventless apart from the fact that less air in front tyres of car was worrying me and I was thinking about morning time availability of pumps etc.

We had to take a long sleep to be prepared for the longest drive of the journey, direct from Manali to Delhi.

From wider canals we came to the open lagoons. In the beginning that was a welcome change. Very soon we realized that the cruise was more interesting when we were seeing the human life around us. In open vistas the only relief was the occasional sightings of Kettuvallams.