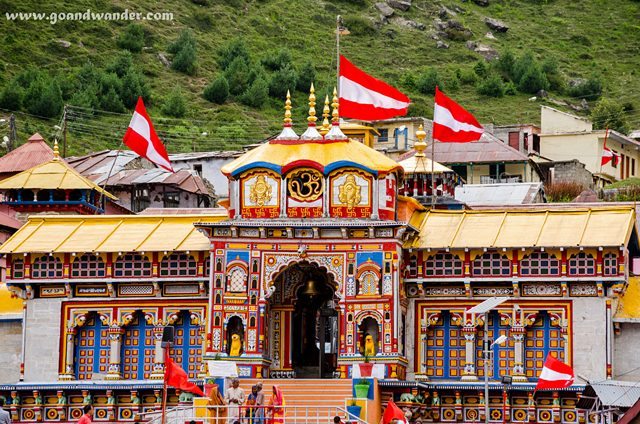 Holy Badrinath Temple, one of the Char (four) Dham (pilgrimage centre) in India, is the temple of Lord Vishnu in Uttarakhand. Nestled in the lap of Himalayan mountain ranges, this colourful temple stands with the river Alakananda flowing on its front and the magnificent peak Neelkantha, also known as ‘Garhwal Queen’ on its back.  Just imagine, there you are, at one of the most popular pilgrimage sites in India, the Badrinath Temple! 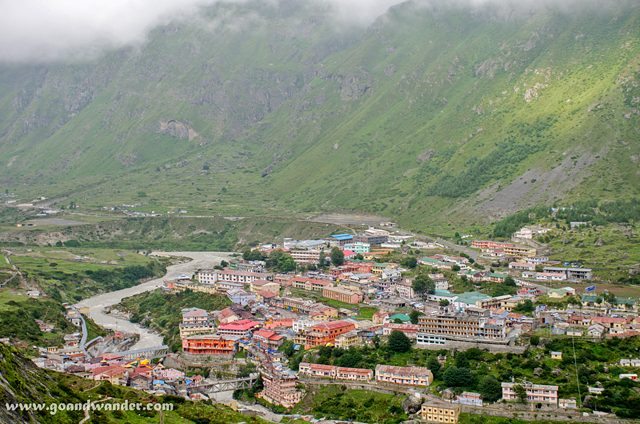 A small valley town, Badrinath, is located between two Himalayan mountain ranges, Nar and Narayan. The river Alakananda flows right through middle of the town. Badrinath is one of the holiest places in India, one of the Char Dham, the other being Puri, Dwarka and Rameshwaram.

It was already late in the afternoon and was drizzling when we reached Badrinath town. We were there in late August and by that time of the season, number of pilgrims were less in Badrinath. So getting accommodation was not difficult at all for us.  There are many hotels and ashrams in Badrinath which offer decent accommodation but no deluxe kind of thing. In this pilgrimage destination, one gets only vegetarian foods. 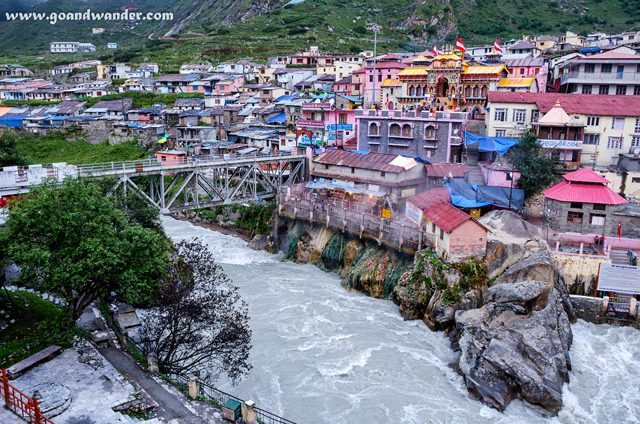 Badrinath Temple on the right bank of river Alakananda

After the lunch, we went to the temple. Situated on the right bank of river Alakananda, the colourful temple of Badrinath was visible from far. We reached the temple and saw pilgrims were entering the temple after taking a holy dip in the ‘Tapt Kund’ which locates next to the temple. A Tapt Kund is a natural hot water pool fed by sulphur spring. The bathing area of the kund has arrangements separate for men and women. 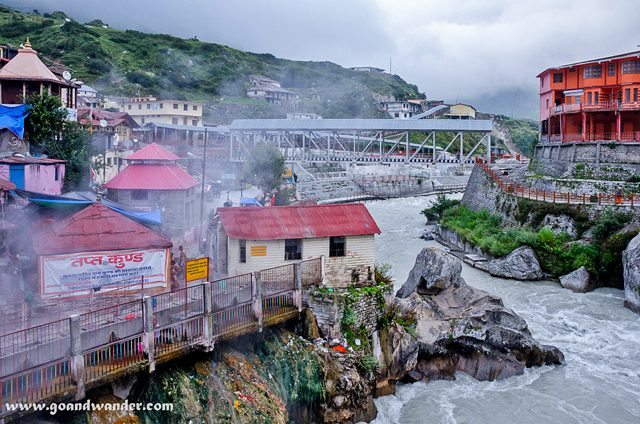 Tapt Kund next to the Temple 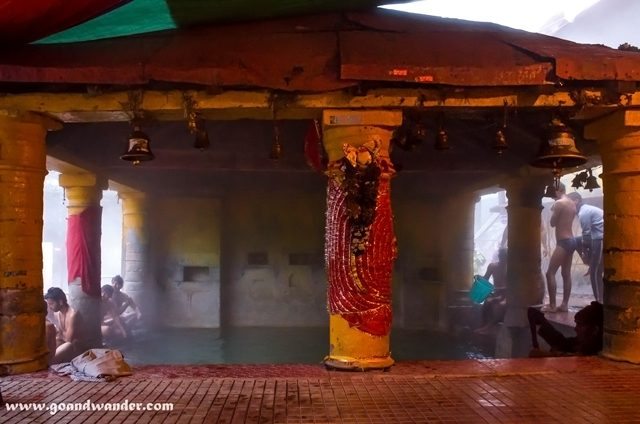 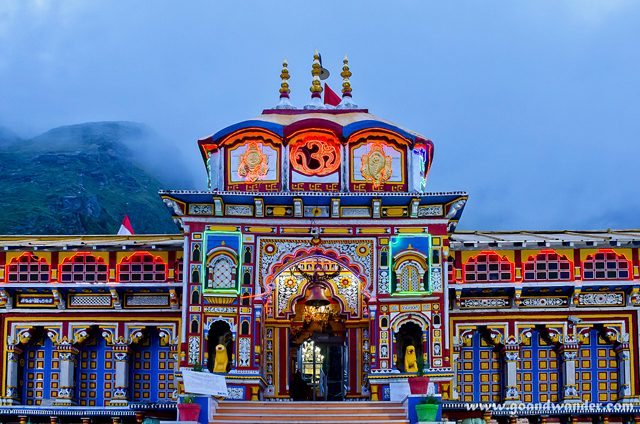 In the sanctum sanctorum, we saw the image of Lord Badrinarayan made of black stone. Then we saw the devotees singing prayers in the Sabha  Mandap (assembly place for devotees). Photography is strictly prohibited inside the temple but it did not come to my notice and I had already clicked a picture of Sabha Mandap by the time all the devotees started shouting. 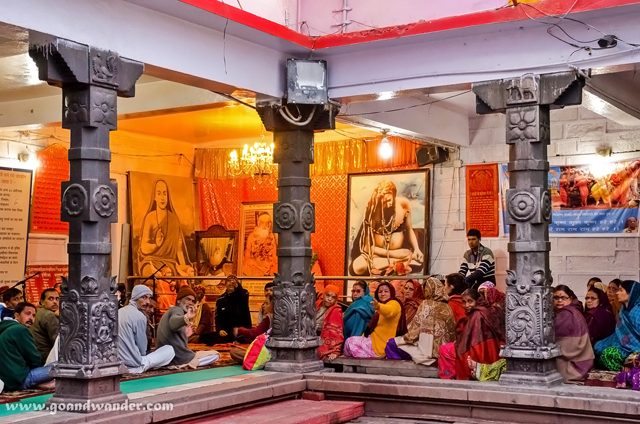 Lord Vishnu as Badrinarayan or Badrivishal, resides on the banks of Alakananda river on the Garhwal hill where every year more than ten lakhs pilgrims visit this holy shrine. Though this holy shrine is located in Northern India, the head priest is traditionally a Nambudari Brhmin from Kerala.

The daily rituals at the temple starts at early morning, around 4 – 4.30 am with abhishek puja and closes at around 8.30-9 pm with shayan aarti. The temple remains close for visitors’ Darshan between 12pm to 3 pm. Due to the extreme weather conditions in the region; Badrinath Temple remains open only for six months from end of April to the beginning of November.

Besides Badrinath temple, there are many attractions in and around Badrinath Valley. You can go for a short trek to Charan Paduka which is believed to be the foot prints of Lord Vishnu that lies on the way to the towering Neelkantha peak behind the temple. Mana, the last Indian village on this region before the Chinese border is only at a distance of three kilometers from Badrinath. From Mana, one can take a short trek to the spectacular Vasudhara falls which locates 5 kms from Mana.

How to Get There

The road to Badrinath starts from Rishikesh, the nearest Railway head which locates at a distance of 297 Kms. The distance remains almost the same if you select Dehradun to be your choice of Railway station or nearest airport which is 314 km away from Badrinath. 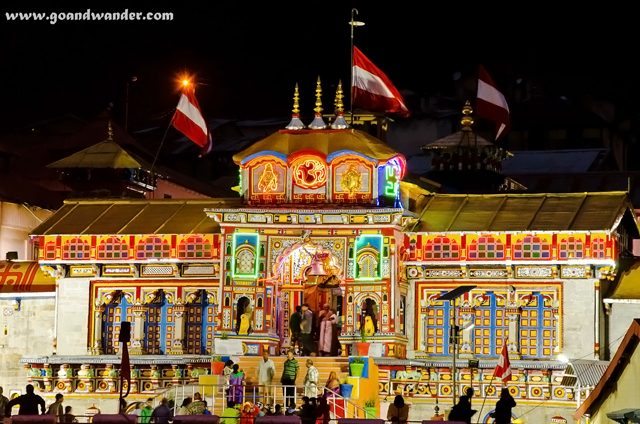 Even if you are not a religious person but a nature lover, Badrinath valley is the place which you should visit once. So get ready and gear up for your next journey into the Himalayas, to the holiest shrine of India, Badrinath. The imposing Garhwal queen Neelkantha peak, Mana Village, river Sarswati, Vasudhara falls, Badrinath temple and the valley will certainly occupy your memory for long.

Badrinath Temple – One of the Holiest Dham in India was last modified: April 19th, 2022 by Anupam Chakraborty

We found out that the rafting at Rishikesh was closed at this time due to heavy rains in Uttarakhand. “Heavy Rains” that triggered an idea. Why not enjoy the rain itself and live our childhood again. Why not a bike trip to Rishikesh?