Morning :
We had the perfect sleep last night. I got up at after sunrise. Some of my friends already woke up. I wished them good morning and took out my camera. Like yesterday, I took snap of the rising sun from the window placed near to my head. 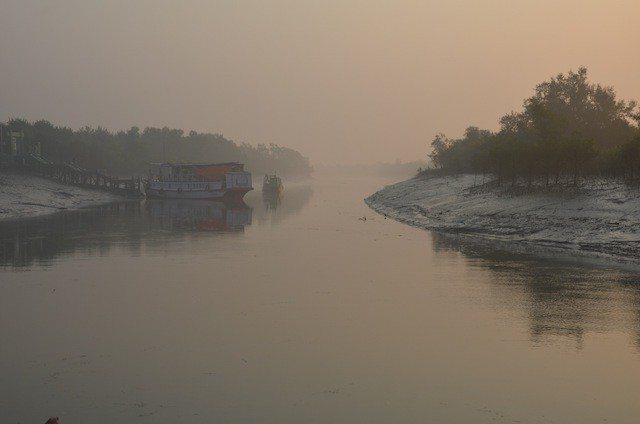 The day was sunny, entire surrounding was glittering with bright sunshine. Gradually, we assembled on the upper deck to have hot tea and snacks. The first question I asked, whether any tiger tried to embark into our launch. Our crew members confirmed that no untoward incident happened in the night. So the tension, which was running in the background of my mind, had gone. We moved to the gate of Bonnie Camp, which was near to the place where we anchored our vessel last night.

Group Photo (me 2nd from left)

This island was just like a picture. The encaged area consisted a Banbibi temple, ethnic cottage, round-shaped lodge, dormitory, park, artificial pool over a small pond, staff quarters, watchtower everything. I liked it very much because of its freshness. This may be because it was located far away from other easily accessible ones. 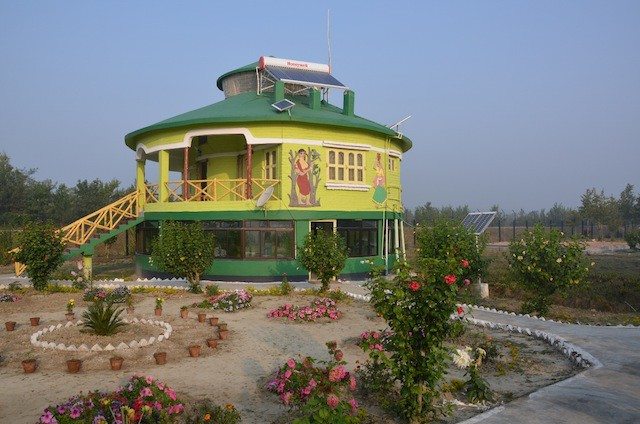 Added attraction of the park was a deer enclosure. The enclosure was actually an encaged area specially reserved for the deer. We saw plenty of deer moving within that area. When they saw us, they came nearer to us. Only the wire mesh wall stood between us. We took snaps to our fullest satisfaction.

Group of Deer Inside Bonnie Camp

In the meantime, Dy.Ranger sahib arrived to visit the island. We get introduced with each other. Then we decided to visit a nearby island, which was otherwise not meant for tourists. It was a deserted island, where an ISRO funded project was installed. Purpose of the project was to measure air pollution of the Sunderbans. Separate instruments were installed to measure methane and carbon dioxide content of the air and velocity of the air. All these instruments were fixed in a tower installed at a place apprx. one and a half km from the river bank inside the jungle.

Visit to the adjacent island :

Assistant of the Dy.Ranger unlocked gate of the island. We entered and saw no sign of regular visit of human beings. Afforestation of plants taken place throught the initial 200 metre area. There was a watch tower on the right side. After 200 metre, an encaged corridor started. It was narrow. There was small cement pedestal at every two feet. So that a person can place his/her foot at every pedestal. We headed towards the interior part. 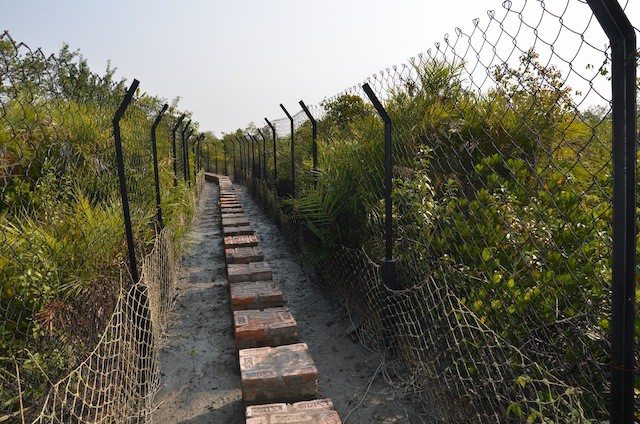 Narrow Walkway Inside the Island

The Dy.Ranger was leading the journey with his gun ready in hand and the last person was his agile assistant. The jungle just outside the wire caged corridor was dense. We felt something was there nearby. Dy.Ranger told that a tiger was following us from a distance. It was not appearing before us, as we were enough in number and there was a gun in the hand of Dy.Ranger. We saw fresh footprint of a tiger in the soft adjacent land outside the encaged area. 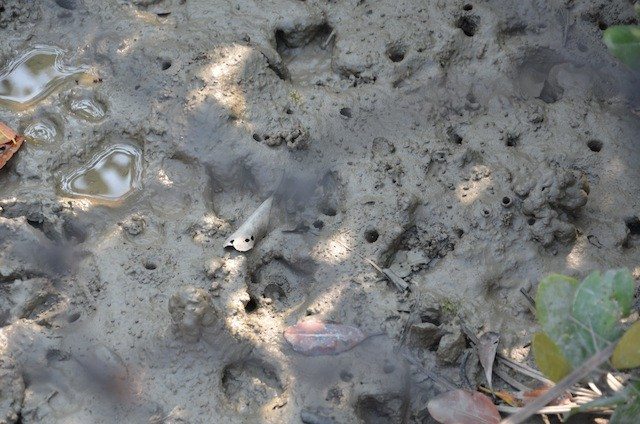 We started to talk aloud with an intention to keep the animal away. We crossed two weak wooden pools. Stream was underway. 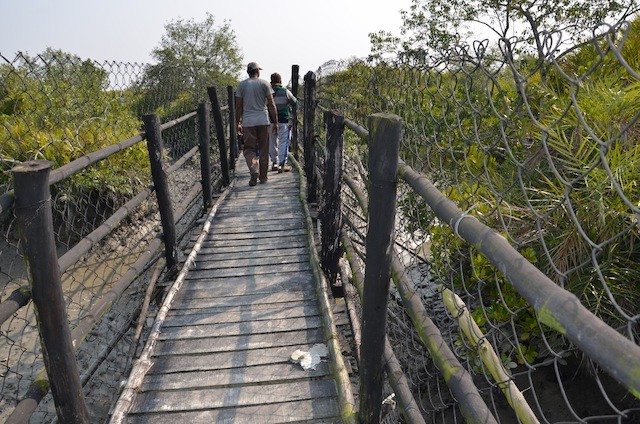 Wooden Pool Inside the Island

Then we found the tower. It was just like a mobile tower. Various instruments were there as I written above. The encaged are ended there.

Outside the area, a camera was fixed in a tree for catching glimpses of movement of tiger. Previously tiger census was done considering footprint. But now a days, it is done based on camera recording, as explained by the Dy.Ranger. We stood consolidated at that place and looked at the adjacent jungle with an inquisitiveness of a little boy.

After a few more moments, we returned to the river bank through the same route maintaining full alertness. We thanked Dy.Ranger for allowing us to have this rare trip, which was unplanned, beyond our schedule. We got into our launch. 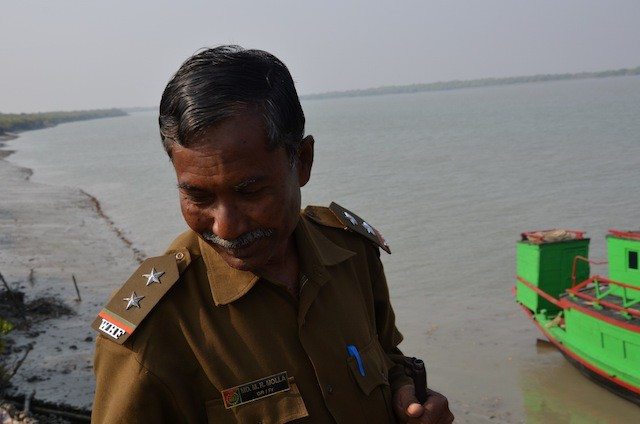 We started our return journey to go back to Sonkhali ghat, the place from where we started our Sunderban trip two days ago. We were silent, travelling within our own minds and remembering what a beautiful trip we made with sincere and full support of our tour operator and vessel crew.

The return journey was the longest one. As we were at the south most point, we had to cover a very long route from Bonnie Camp to Sonakhali, which took almost four hour and fifteen minutes. 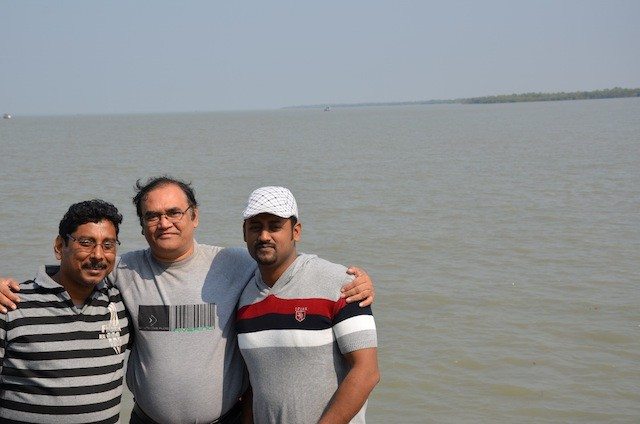 Myself in the Centre With Friends

We started around 10.40 am. While returning, the pilot of the launch made a small stopover at his own village. He made a call from his mobile to his family. So his wife, daughter in law, grandsons etc. came to the river bank to meet us. The gesture was so simple and homely that it touched our heart. We got down from the launch and walked a few steps inside the village while gossiping with them. The pilot started to chase us up, because we had to go back to Sonakhali. We bid goodbye to the family members of the pilot and again started. 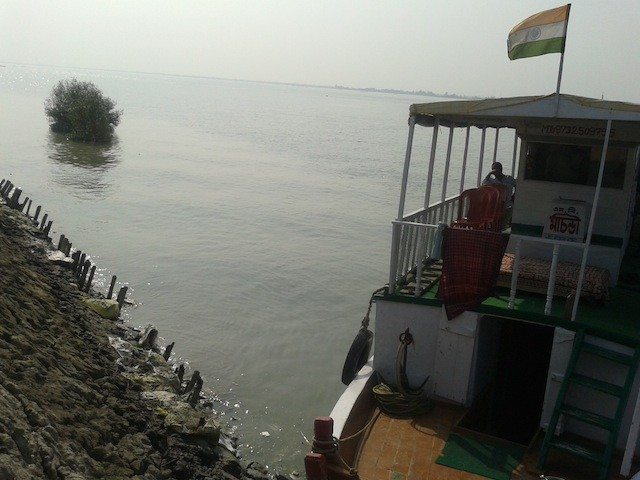 Halt at a Riverside Village

We reached Sonakhali ghat at 2.50 pm. We took our luggage and thanked the pilot and his team for their splendid support. They left no room for any kind of complaint. From Sonakhali, we went to Canning station for catching the return train to Kolkata.

Before concluding, I must mention that, from time immemorial, Sunderban attracted attention of various writers and novelists of several languages. “Mansa Mangal Kavya” has been the most ancient one. “Life in Sundarbans : A Participatory Rural Appraisal” by Samares Kumar Das gives a picture of inner life of this area. Part of the plot of Salman Rushdie’s Booker Prize winning novel “Midnight’s Children” was also set in the Sundarbans. Most of the plot of prize-winning anthropologist Amitav Ghosh’s 2004 novel “The Hungry Tide” was set in the Sundarbans. The Sunderbans have been the subject of numerous non-fiction books, including “The Man-Eating Tigers of Sundarbans” by Sy Montgomery for a young audience, which was shortlisted for the Dorothy Canfield Fisher Children’s Book Award. Similarly, “Tigerland : A Journey Through The Mangrove Forest of Bengal” by Caroline Alexander and “Forest of Tigers : People, Politics and Environment in the Sundarbans” by Annu Jalais give a detail picture of this famous area. Apart from literature, a photographic journey was published by noted photographer Intisham Kabir under the title “Sundarban”. Some famous films were also made on the Sunderbans. In 1960, a film named “Ganga” was made in Bengali, where Ms Ruma Guha Thakurta (1st wife of Kishore Kumar, mother of singer Amit Kumar) acted. “Padma Nadir Majhi” was made into a movie by noted director Sh.Goutam Ghose, based on a novel of Sh.Manik Bandyopadhyay. In 2014, a Hindi film named “Roar : Tigers of the Sunderbans” was released, directed by Sh.Kamal Sadanath. A BBC documentary named “The Man-Eating Tigers of Sundarbans” was made, directed by Ingrid Kvale. The area provides the setting for several novels by Emilio Salgari, (e.g. The Mystery of the Black Jungle). Thus, Sunderban has always been point of attraction of writers, film makers, anthropologists, apart from millions of tourists.

If we touch major viewpoints of the experienced authors, film makers, photographers etc. before going to the Sunderbans, our outlook will be much different. At the end I conclude that, I enjoyed every moment of the tour, which will be cherished by me throught my life.