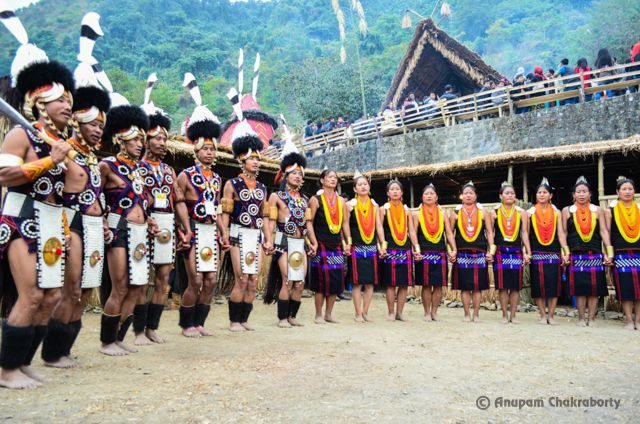 A moment from Hornbill Festival of Nagaland 2014

Words are not enough to describe what the Hornbill Festival is all about! All I can say that, it is THE mega cultural extravaganza of North-East India. It is the joint celebration of sixteen different Naga tribes to exhibit their cultural display at one venue and is, therefore, also called the “Festival of Festivals”.

The Nagaland Express arrived at Dimapur Railway Station early at dawn. I got down from the train along with my two friends Prakash and Kamal. Prakash was earlier posted in Nagaland so the place was known to him. He went ahead through a foot over and we followed him till the exit.

Hornbill Festival is held in the village Kisama which lies about 10 KM from Kohima, the capital city of Nagaland. Kohima is 74 kilometer from Dimapur and approachable only by road. So one who wishes to visit Kohima may fly to Dimapur or arrive here by train. 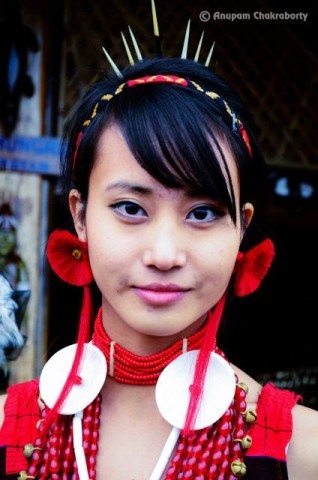 It normally takes two and half hours to reach Kohima from Dimapur and hence we thought not to waste much time outside the station. Quickly we finished the rituals of initial bargaining and hired a car at Rs.1100/- for our journey to Kohima. 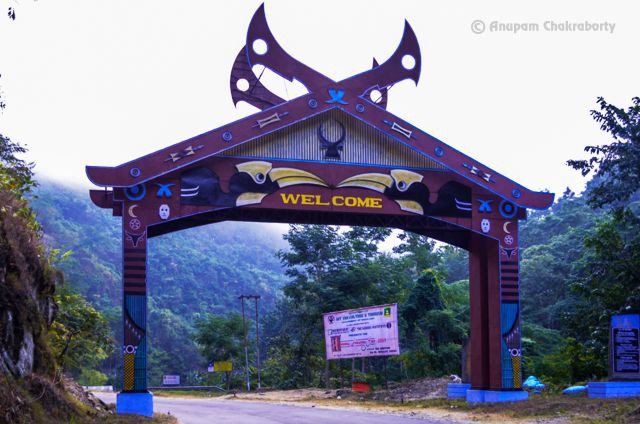 The zig zag hilly road to Kohima was not too bad and we were enjoining it. At the entry check post we were stopped for checking. Before boarding on a journey to Nagaland it is a must for domestic tourist to obtain Inner Line Permits (ILP) from the authorities.

We were carrying it but the Policemen did not ask for the same and allowed us to move ahead looking at our face. It might be because we do not look like Bangladeshis or might also be for the reason that our Prime Minister would pass through this road for inaugurating the Hornbill festival. Whatever might have been the reason we enjoyed the privilege and continued our journey. However this privilege was not granted near Kohima and our cab was directed by a policeman to follow a jam packed road. The delay was inevitable. 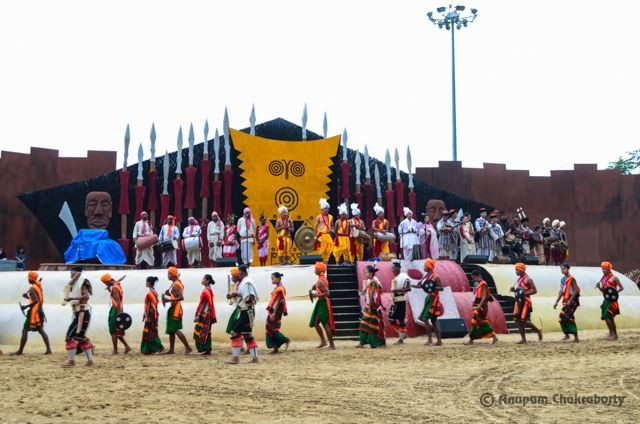 Stage of Hornbill Festival in the Main Arena 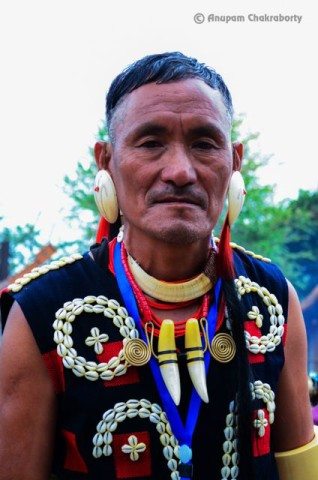 A Naga man in traditional attire

Hornbill festival inaugurates on 1st day of December every year and it goes on for long ten days. We were suggested to attend inaugural ceremony which is a wonderful event to watch though closing ceremony is also nothing less. Inaugural function generally starts at 10 a.m. and the gallery around the main arena gets occupied fully by 8 to 8.30 am. We were already late and hence did not waste much time after checking in the hotel. We rushed for taxi to reach the festival venue.

Crowds at the Festival Venue

About 10 Km from Kohima, on the Kohima-Imphal road, locates the festival venue Kisama, the Naga Heritage Village. We reached the venue before the Chief Guest, Shri Narendra Modi, our Hon’ble Prime Minister. Alas! we could not beat them who arrive at the town previous day and by that time already secured their seats in the gallery.

The locals were also much enthusiastic to hear our prime minister and turned out in huge numbers. We were left with no space near the main arena but to get lost in the huge crowd where everyone was trying to have a glimpse of the stage over the head of others. With much effort I could only find a place less crowded which offered me a tiny view of the stage. All hopes to see the inaugural ceremony ended in smoke and I was getting pissed off for not coming at Kohima a day before. 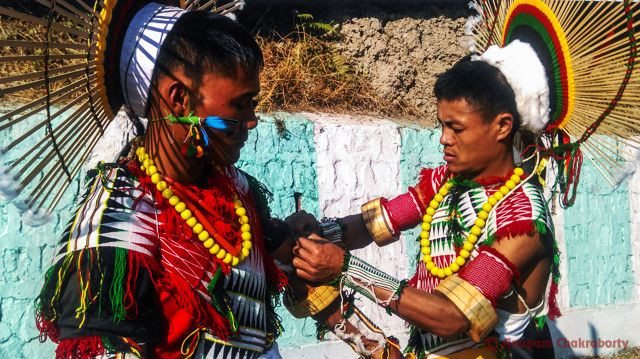 Last minute adjustments by the Participants

Our all efforts to find a place where from we could see even a little of the ceremony went futile. Nobody would have thought Nagaland, a State of North-East India, which has been struggling to maintain internal peace for long and still maintaining the ceasefire condition, would make the festivals of its 16 different tribes reach every part of the world within a period of little over a decade since its first launch in the year 2000.

The presence of large number of foreign and domestic tourists as well as huge turn up of local people compelled us to get lost in the huge crowd. We had two options, either to stay there and refresh our mathematics by counting numerous human heads which were only visible or to leave that place for trying out to do something meaningful. We decided the later. 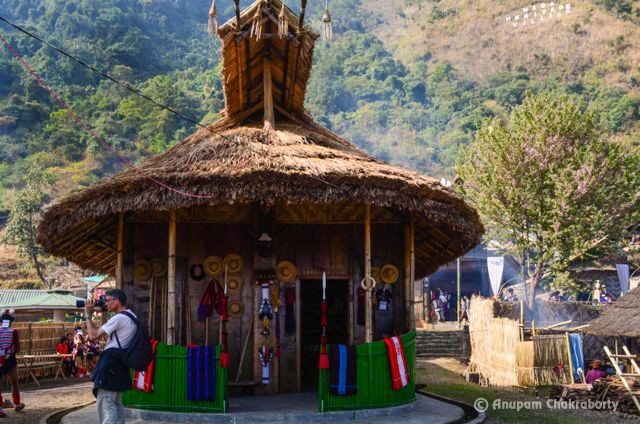 A Morung or Traditional Tribal House at Heritage Village

Participants Rehearsing at their Morung

All the sixteen Naga participating tribes had their own Morung at Kisama Naga Heritage Village created in the indigenous typical Naga style. Morung is the tribal house and a youth dormitory. All such Morungs were different and unique and made according to the traditions of each tribe.

We started visiting these Morungs. In all the Morungs the Nagas were displaying their traditional lifestyle including folk songs and dances. It was a nice way of providing opportunity to interact with and be a part of them. All Morungs had also their own restaurant where they served specific delicacy. 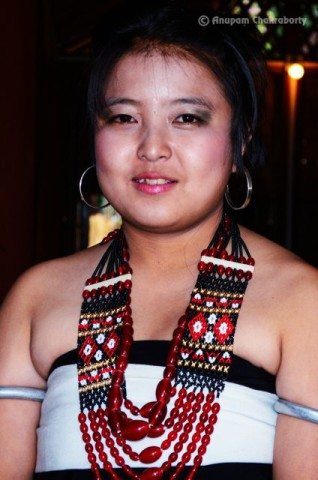 A Naga Girl welcoming visitors at her Morung

Traditional Naga Kitchen inside the Morung

I was neither missing the actions happening in the main arena nor did I have the wish to go back and fight for a place there. It was so interesting and engaging visiting from one to another Morungs. It was a lovely feeling staying for a while in each Morung and watching them dancing and singing their folk songs. It actually transported me to another world. For those Naga tribes it was the time to showcase their rich cultural heritage and tradition to the world and for the visitors to experience a different world. 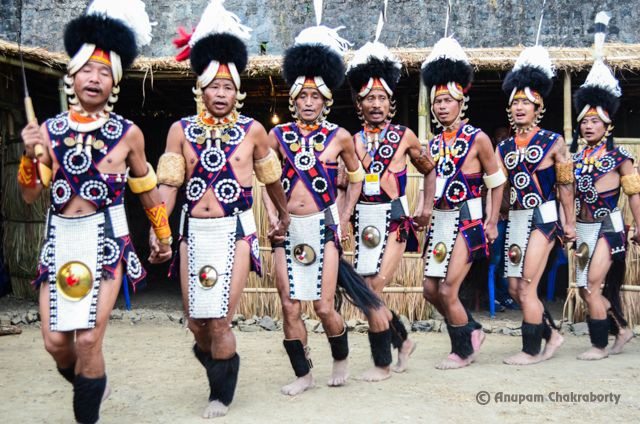 A moment from Naga Tribal Dance 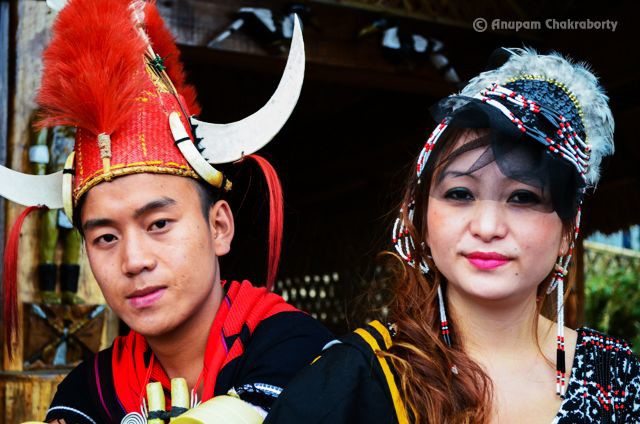 A Naga couple sitting in front of their Morung 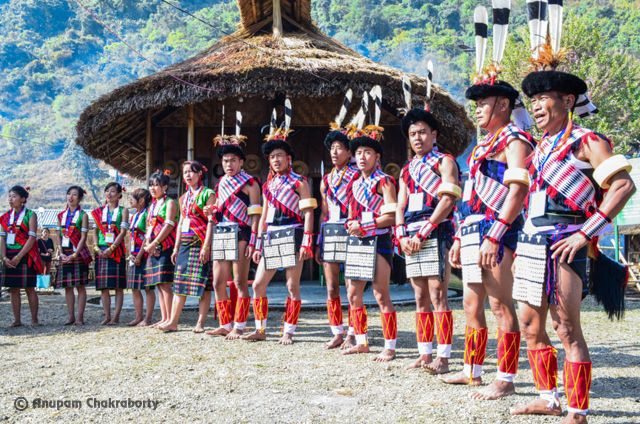 Participants rehearsing songs at their Morung

Our Hon’ble Prime Minister remained in the inaugural ceremony for limited hours and returned back according to his schedule. While walking down in front of the Morungs the Prime Minister waived his hand to bid adieu, everyone including the participants rushed as close as possible for a glimpse of him.

Few minutes later, the crowd got scattered and I rolled down to the main arena. I saw beautiful Naga girls were walking on the ramp wearing Naga traditional dress. Suddenly I became a part of them. Was I dreaming? 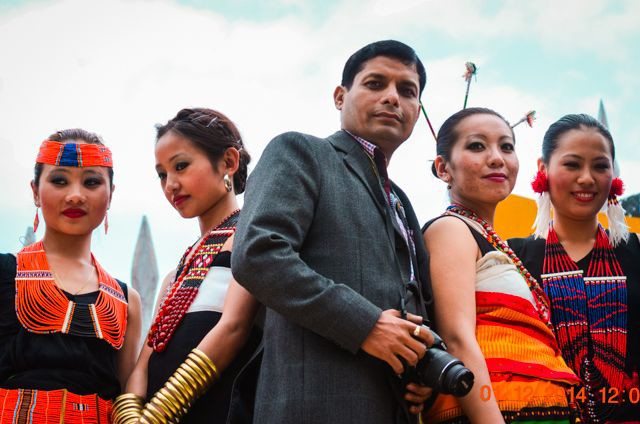 Hornbill festival is organized in such a way that visitors get occupied in most parts of the day. It was the time for Chilly eating competition. In that competition the person who could eat maximum number of chilly in 10 seconds would win handsome amount of cash prize. These chilies are not normal chilies but very very hot! They are also called King Chilly or Raja Mircha. A team of doctors and nurses were present there to attend the participants who might have fallen sick after eating the chilly. Was their presence giving the participants a moral boost or scaring them I am not sure! 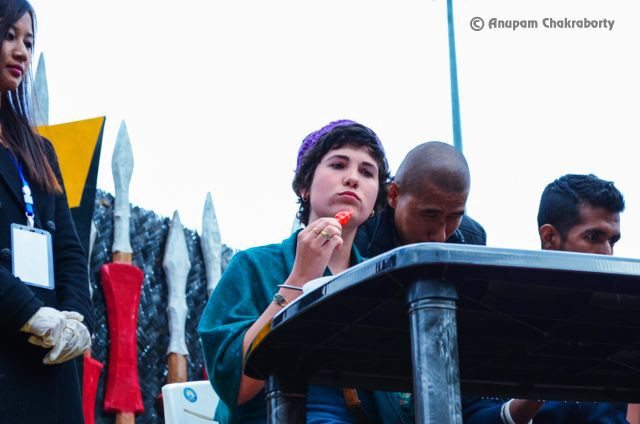 Nights were also not free of any event and the visitors could enjoy the rock musical contest or might even take a stroll in the Night Bazaar. We opted for the later for experiencing something new. 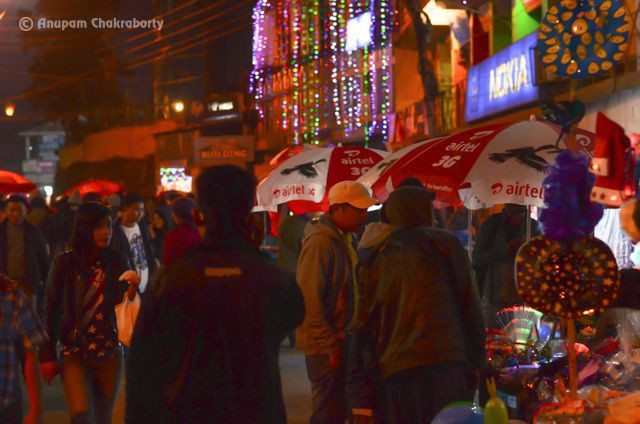 A Glimpse of Night Bazaar

Night Bazaar is a night carnival for shopping and merrymaking along with the street entertainment events, road side food stalls, handicrafts and ethnic delicacies for both the locals and visitors. We saw girls and boys were wandering around the Bazaar wearing colourful musk and some of them had also painted their faces. 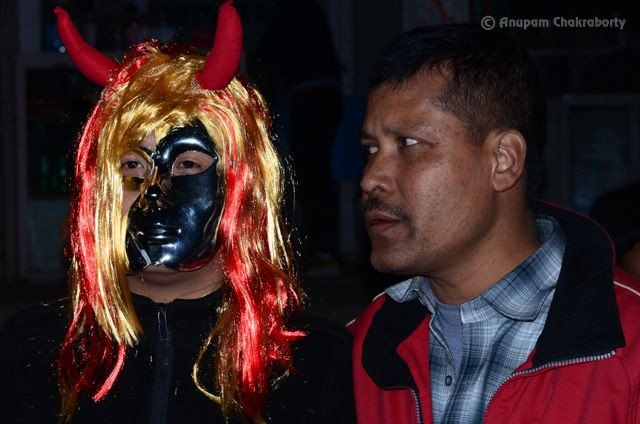 Face at Night Bazaar with my friend Prakash 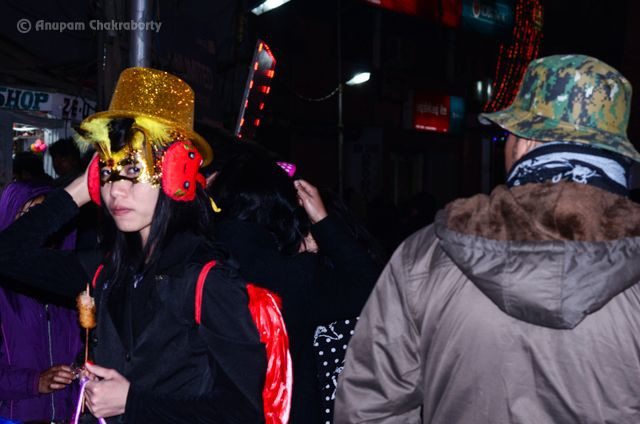 Girl with the musk at Night Bazaar

Stay tuned to read more about the forthcoming Hornbill Festivals when hangover of night would roll into the next eventful day.