Lahaul and Spiti are some of India’s remotest regions. Spiti is characterised by completely barren, snow capped mountains in a high altitude cold desert. Sparsely interspersed by small patches of greenery, it has picturesque villages of whitewashed mud and brick houses clinging to snow fed streams and rivers.
The Spiti valley ends at Kunzumla where Lahaul starts and together, they form the district of Lahaul and Spiti. Lahaul is greener, though it becomes arid and a cold desert as one drives away from Keylong and towards Leh on the Manali-Leh highway. Our exploration of Lahaul started with Chandratal yesterday. We look forward to traversing through to the northern most point of Lahaul with Sarchu being our destination today.

Yesterday, we entered Lahaul via the Kunzumla and saw the beautiful Chandratal. This morning our aim is to make it from Chandratal to Gramphoo before the water crossings become even more hazardous due to swelling waters closer to mid-day. Our tight schedule puts paid to any idea of visiting Chandratal once more in the morning!

19 Jul 2014.
We leave after a quick breakfast by 0630 hrs. Monsoon is making its presence felt in this rain shadow region with the slow drizzle refusing to stop. The fog hugs the mountainsides and progress is correspondingly slower. We cross the bridge across the Chandra and reach Batal. A couple of bikers are sipping steaming tea at one of the tea stalls in the chill of the morning. Batal is a two shop and a HPPWD guesthouse place with nothing else around.

The (dirt) road winds along at the river level and what a road it is! The track is filled with jagged rock fragments from weathering like scree and the smooth water worn pebbles and stones. Huge boulders intrude on it arbitrarily. There are uneven overhangs and blind foggy corners when the river is running close and the road rises up the cliffs. Streams take possession of it whenever it is convenient…! There are still snow drifts along the path and at times, the road has been cleared through them or around them. 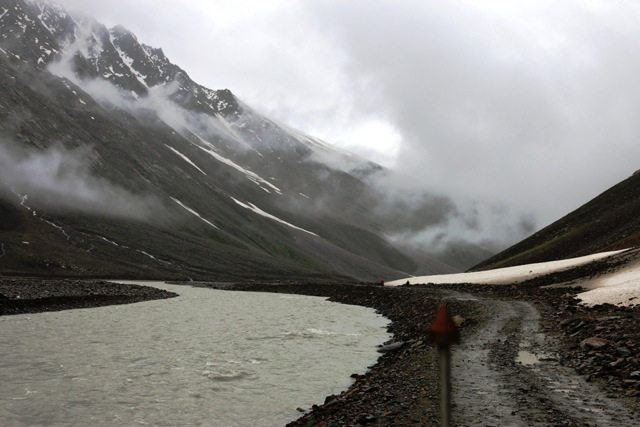 Road to Gramphoo just after Batal 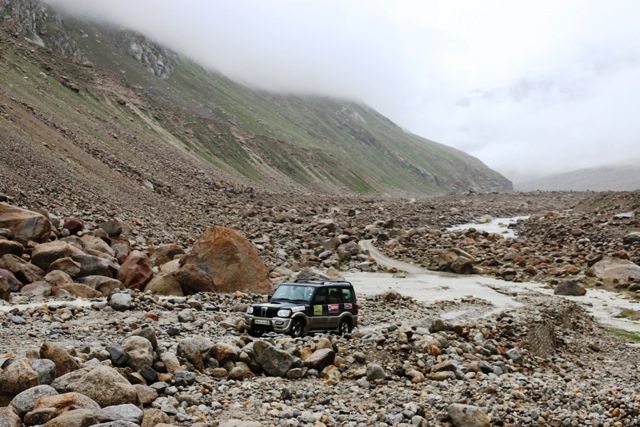 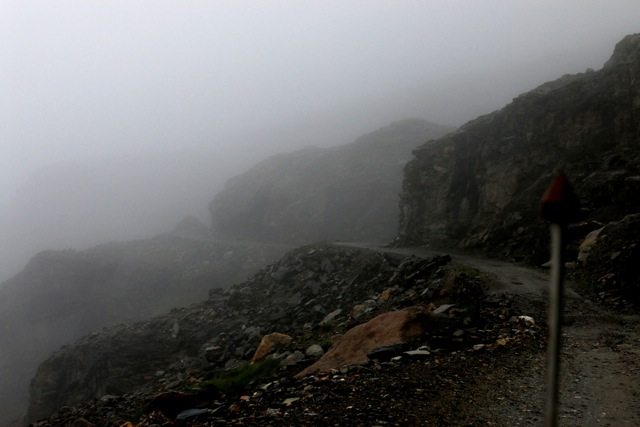 Between Batal and Chota Dhara

We cross Chota Dhara and the not so ‘chota’ water crossings thereafter! Driving through the water is rough because the mud and finer gravel has been washed off leaving the larger stones and sharp rock fragments. At one point I see an i20 being driven ahead of us. It stops at one of the large water (almost river!) crossings and the passengers all get out. They wade through the rushing waters and the car is laboriously and precariously driven over with much stopping and pushing. Only after it crests the incline on the other side are the passengers allowed back in. In fact this continues in the next big crossing too but we find some space and overtake this adventurous bunch! The pictures below will give a better idea of the nature of the roads… 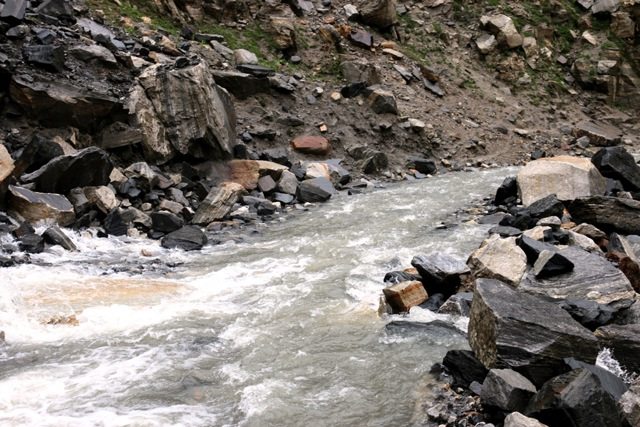 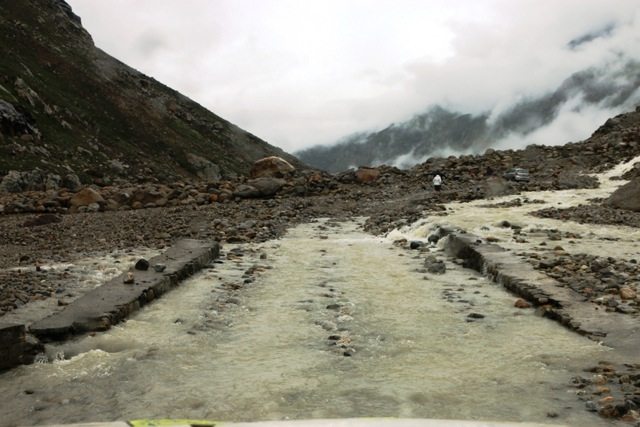 We reach Chhatru which is the end point of the Hampta pass trek starting at Manali and crossing over the Rohtang range to end here. We cross over to the left bank of the Chandra and the ascent towards Gramphoo begins. The streams still cross the roads with impunity but in between, the road improves. An abundance of tiny colourful flowers in patches of lush green grasses signals the beginnings of a wetter biome. 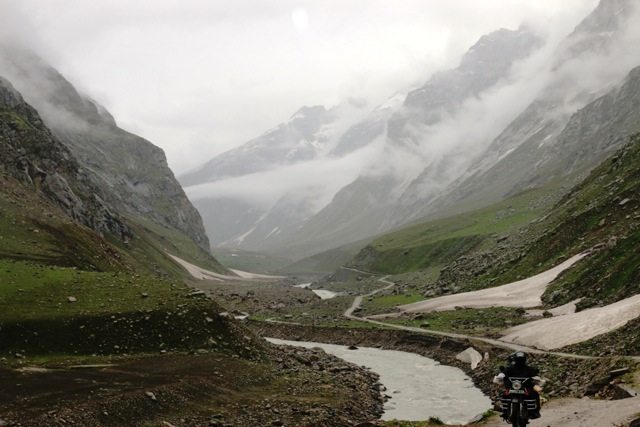 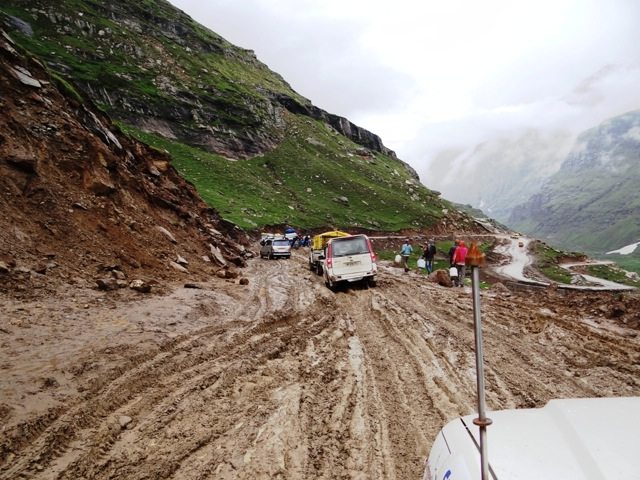 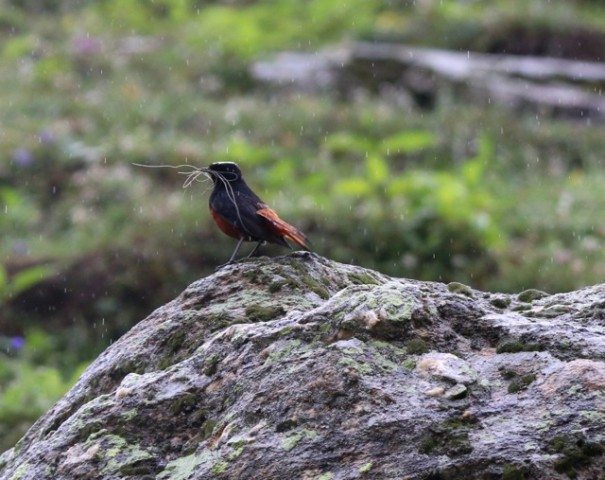 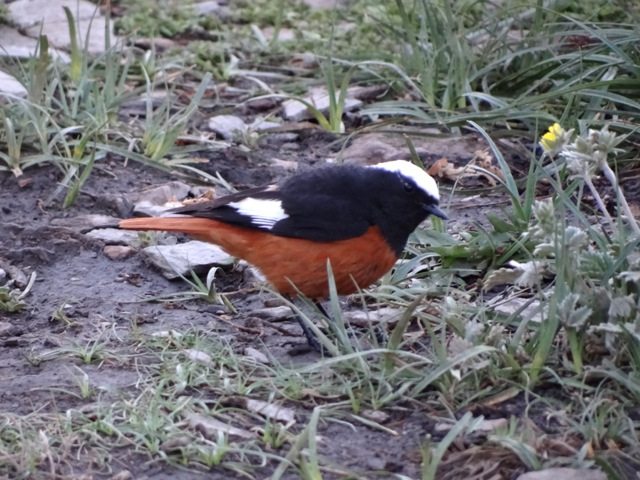 On these roads, distances do not count. Time taken for travel is hugely dependent on the condition of the roads, the terrain one is traversing and the magnificence of the landscape which will force numerous (photo) breaks. We take about 4 hours to drive the 50 odd Kms to Gramphoo and we count 36 sizable water crossings on the way!

Gramphoo welcomes us with very heavy traffic creeping through the thickest slush I have ever seen on the roads. I can feel the vehicle slip and slide loosing traction on the stretch. Very dicey with over laden trucks for company!

Once on the other side, it is smooth sailing. The water crossings are a breeze after what we have just gone through and the well tarred road a luxury! The green all around is a feast for deprived senses. Hypnotic though the charm of the spartan Spiti Valley, Lahaul entices us with abundance… and we are captivated! 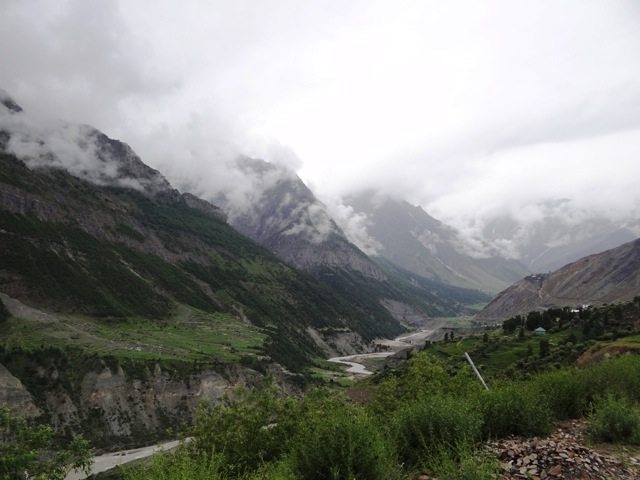 Henceforth, it is a straightforward route to Sarchu with mostly good roads and even better views.
The Chandra River originates at the glaciers near Baralachla and heads south, flowing past Chandratal, Batal… Chhatru to reach Tandi. Bhaga flows west from Baralachla and then southwest through a series of gorges to emerge near Darcha in a wider valley finally reaching Tandi. At Tandi we see the confluence of the Bhaga with the Chandra. Here onwards, it is known as the Chandrabhaga which gets renamed as the Chenab once it enters Jammu and Kashmir. This stretch through Khoksar, Tandi and Keylong is quite verdant before the drier regions start after Jispa, Darcha and get really bone dry around Zing zingbar and onwards to Sarchu.

Spring, summer and autumn are compressed into just a third of the year in these parts. This time brings new life and it is bursting out with a vengeance. The trees are all luxuriant with new leaves and laden with fruit. The birds are busy feeding the young making sure they get strong enough to withstand the harsh winter to follow. Lunch at Keylong at a roadside Hotel Padma and then off again. 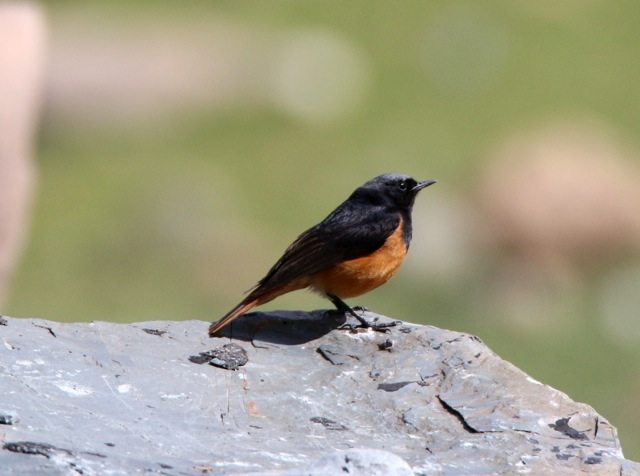 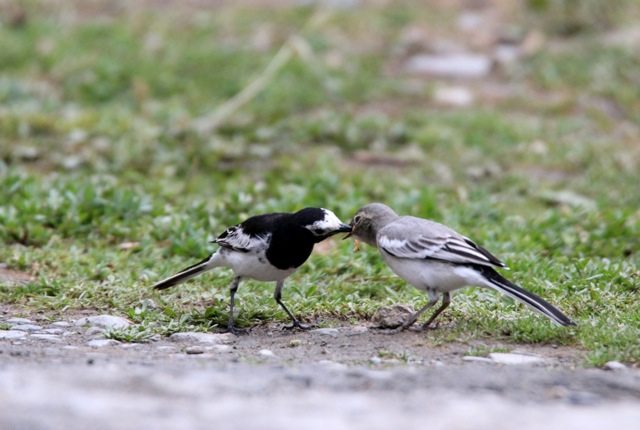 Jispa passes by followed by Darcha, all the while the flora declining to just stunted bushes and then grasses as we head higher towards the mighty Baralachla pass. Deepak Tal is a glassy turquoise pond near Patseo, a little before we start uphill for the pass. As the road ambles up, a good smattering of snow patches gives a very dalmatiany look to the mountains around. The snow patches get denser as we reach higher and many a times the road has been carved out of the frozen slope. 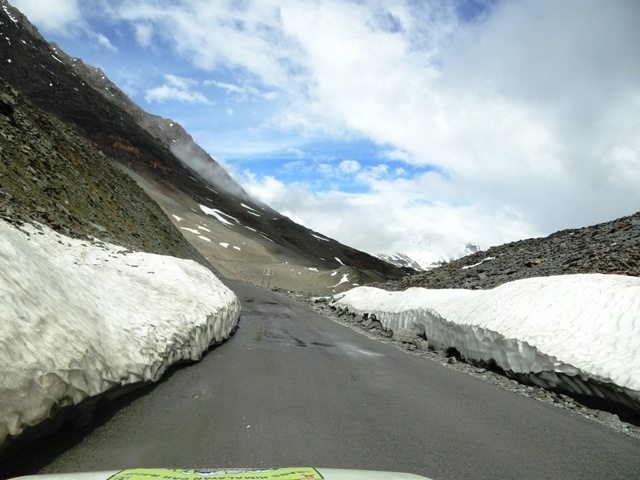 Our Scorpio against a snowy slope at Baralachla 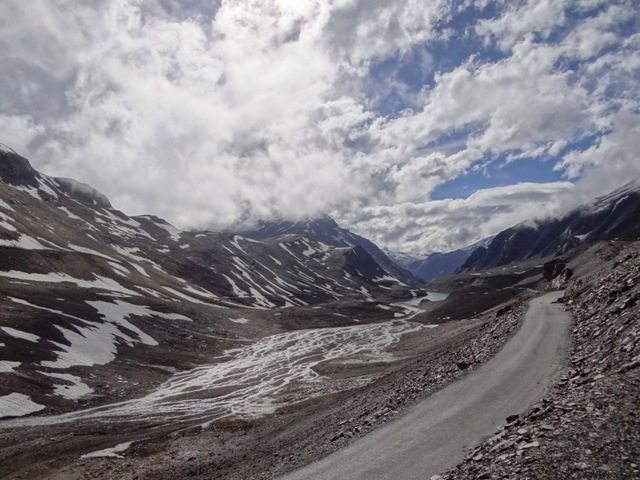 Suraj Tal, literally the ‘Lake of the Sun God’, is an exquisite emerald green lake bounded on its left bank by the Leh Manali Highway. The lake is fed by glacial melt and its pristine waters form the source of the Bhaga River. Our attention is caught by a little bird with a wavering gait on the snow near the road. It is a Horned Lark juvenile, learning the ropes! We drive just three more kilometres. And we’re at Baralachla (4883 m) … an exhilarating feeling! 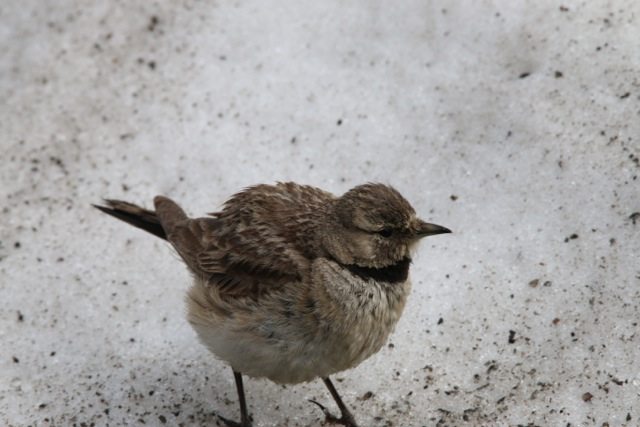 Horned Lark chick on the snow in 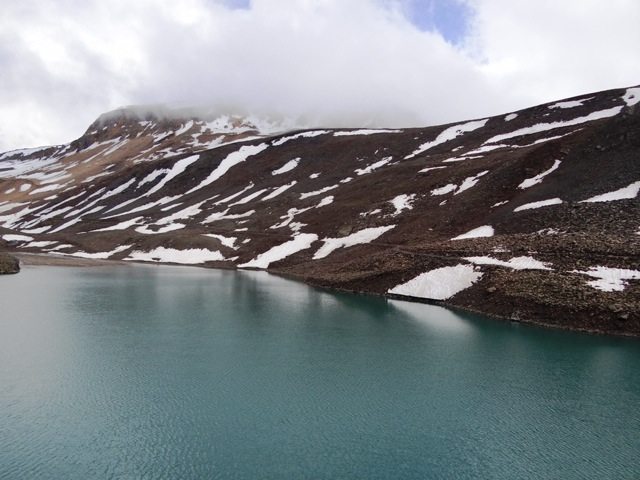 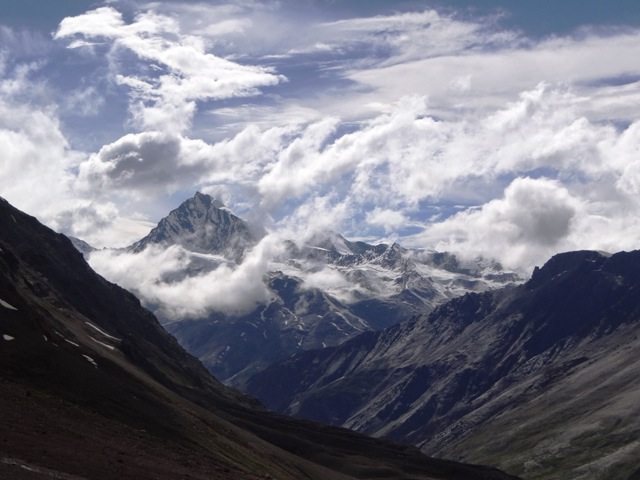 The other side of Baralachla also has a river flowing down, the Yunam river, a tributary of the Zanskar which in turn joins the Indus. In fact, the pass acts as a boundary between the watershed areas of the Bhaga and the Yunam rivers. 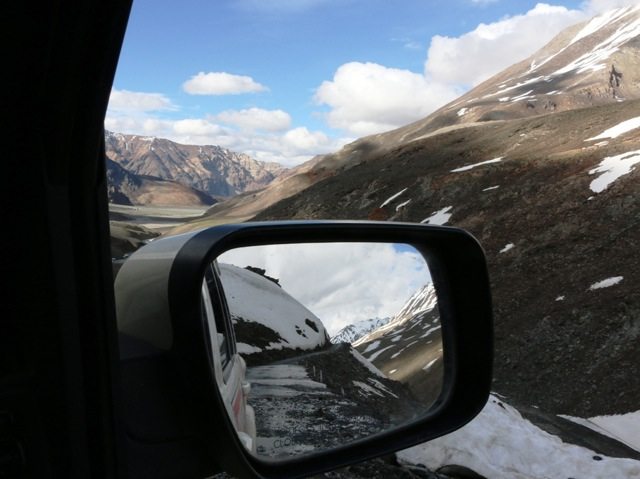 The Yunam is just a little sliver on the riverbed contrasting sharply with the dry, rugged terrain around. For kilometres there is no road to speak of, just a dirt track kept distinguishable from the rest of the debris dotted area by the occasional vehicle plying on it. Right there, is a bright splash of red. Turns out to be an elusive Crimson fronted Rosefinch. There are surprises in the most unexpected places!!

Just this morning I was overwhelmed to see the abundance that water has bestowed in the southern part of Lahaul. I thought that is glorious. And now I stand awestruck in this dry and desolate landscape where soaring mountains surround a vast high altitude rolling plain through which is a deep gorge and a river flowing through it… We are a little short of Sarchu and these are the Lingti plains where there is virtually no precipitation even in the winters…

And finally, Sarchu! There is virtually nothing in the place except a few tented camps during the summer months and a small army detachment year round. The wind howls making me burrow deeper into my jacket the minute I step out. We take a walk around the place and soak in its unique charm. But nature has been kind in all its adversity. Or maybe it is the stark unspoilt and unpolluted beauty that I am so taken with. Such places need no adornment, no embellishment. Just this raw, unadulterated nature is enough. This is a place one must travel to at least once in this lifetime! 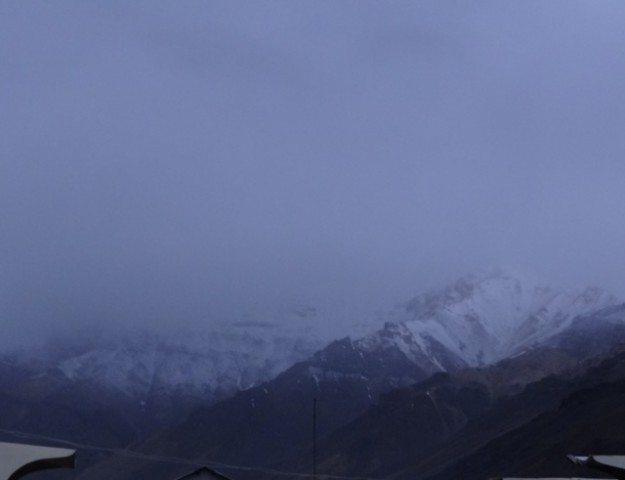 Snowfall in the higher reaches at Sarchu

This morning started with this grey overhang of clouds accompanied by a drizzle which gives us company till Gramphoo. On and off, it has been with us through the day and by now, the ominous clouds are threatening to open up and the biting wind drives us indoors. In minutes, it is snowing on the higher reaches of the surrounding mountains.

The team is happy to have come this far mostly ticking off all the points on our agenda. The Docs’ have been dishing out AIDS advice and awareness at every opportunity be it tea stalls or remote camps. Tomorrow will be the last leg of our journey when we reach Leh.
The journey continues…

Chandratal to Sarchu… a picturesque drive through Lahaul was last modified: October 16th, 2018 by Naturebuff