I am sharing my experience about Family trip to Jodhpur. The trip was taken last year in the first week of October. This trip is also memorable as my 4 years old son had his first train journey.

I had travelled to Jodhpur many times in past 15 years. The city has many attractions, including Mehrangarh Fort, Ummed Bhawan Palace, National Handloom, Janta Sweets & many more.

By coincidence, I had travelled to Jodhpur approx. 10 times in a short span of 3 months of June to August last year. Every time, I spoke so high about this city with my wife, that she decided to visit it as soon as possible.

Finally, the plan was made to travel in the first week of October, utilizing holiday of 2nd October in journey. I booked tickets of Mandore express on both sides, with 2 days & 1 night stay in Jodhpur. As my son was just 4 years old, so we didn’t need to book tickets for him. My son as well as my wife were eagerly waiting for the day. Specially, my son was so excited that the only topic of discussion for him for many days, was “Jodhpur”.

Finally, the day of travel arrived. We packed our stuff in a big suitcase, with ample space in it, left for accommodating the goods from shopping in Jodhpur.

Mandore express starts at 9 pm from Old Delhi Railway station. We booked a cab for 7:30 pm & reached station at 8:15 pm. The waiting time was spent in giving a guided tour of Railway Station to our Son. He was nervous as well as astonished to see so many trains there. His long existing query about “how such a big train takes a U turn” was also answered. Shortly, Train arrived at the platform, we boarded the coach & got settled on our births.

The train started at scheduled time & after a comfortable journey, we reached Jodhpur next morning at the right time. Mild rains welcomed us in Jodhpur. An auto was hired & we reached our hotel, Hotel Apex International, near Sardarpura Police Station. Tariff : Rs. 2400 for double occupancy. Breakfast included in the same. It is situated at the main Sardarpura Market. Many garment outlets, restaurants, bakeries & other shopping options are available at just walking distance.

After check in, we rested for almost 2 hours as my son didn’t sleep well in his maiden train journey. We have booked a cab for a full 2 days, which was expected to reach hotel by 11am.

We got ready & had our breakfast in the hotel restaurant. We left for Mehrangarh Fort around 11:30am & reached there in next 20 – 30 minutes. Morning rains had stopped & weather was very pleasant. This was a great relief as Jodhpur, also known as Suncity, is famous for its hot weather.

Mehrangarh fort is situated on a hill & is a beautiful monument of Rajputana Dystany. It was built by Rao Jodha in 1460 AD, after he felt that their old fort of Mandore is no longer safe for them. 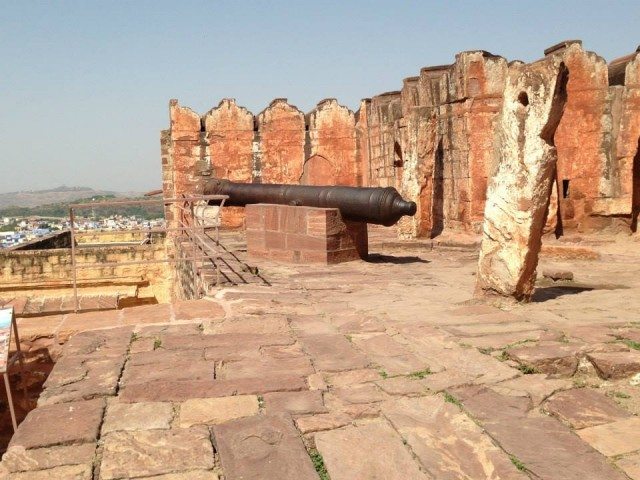 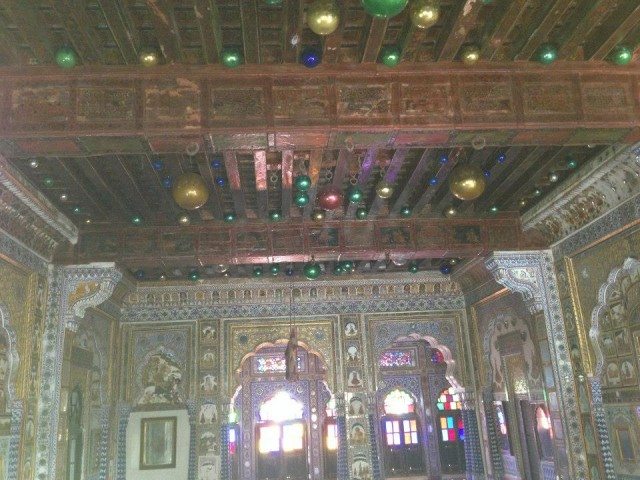 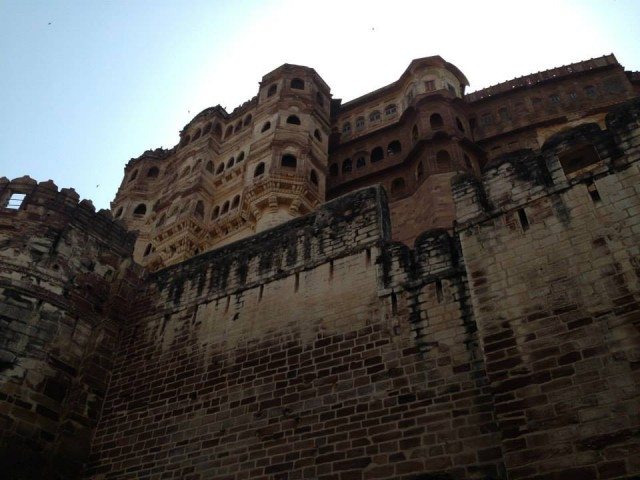 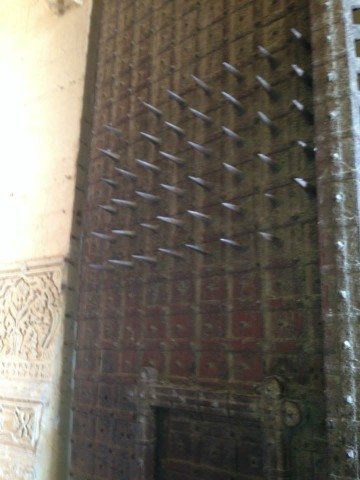 There are many gates in the fort. Each of them is huge & has iron points on them, which was placed to prevent attack by enemy army elephants. Each gate is placed in a zigzag way from the previous one, with increasing height, so that breaking them is not easy with push of force & motion. There are marks for cannonball hits, which were fired on the fort by troops of Maharaja Jai Singh during a long lasting war. (As briefed by local guide there).

After entering from last gate, there are hand marks of Satis of Rajput families. Then comes the main entry of the Palace. The Palace is very beautiful & huge. There are many Mahals in the Palace, mainly Sheesh Mahal (Full of shinning Glass), Phool Mahal, Moti Mahal & many more. The palace also has a museum, which consists many historical articles like costumes, maps, furnitures, musical instruments, Pagadis etc. 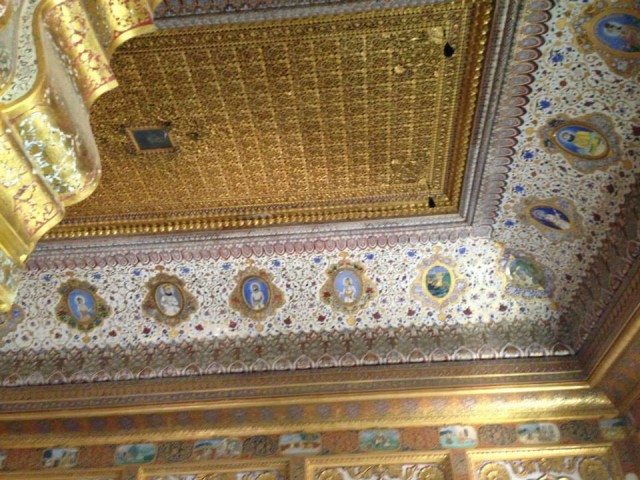 Once you reach to the top floor, breathtaking view of Jodhpur city astonishes you. Blue houses, lush greenery (Our visit was just after the monsoon) & Ummed Bhawan Palace are clearly visible. We stayed there for some time & enjoyed the cool breeze. 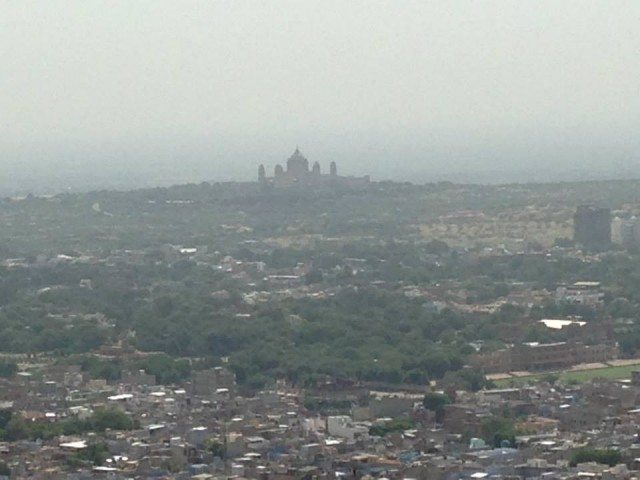 There is a temple situated near the exit gate. We visited the temple & had the Darshan of Mata.

Slowly, we came out of the fort, boarded the cab & started for the next destination – Nai Sadak.

Nai Sadak is a main market of Jodhpur & one can visit it for garments, Jodhpur footwears & many more Rajasthani items. It is situated near to the railway station. We decided to explore the market on our own & hence asked cab driver to drop us at the beginning of this road.

Since we had our breakfast very late, we decided to skip the lunch & had some snacks at famous Janta Sweets. This sweet shop is quite old & very famous in Jodhpur. Apart from sweets, they also prepare Kachauris, Samose, Mirchi Bada & many shakes. The shop is situated at the beginning of Nai Sadak & another outlet is a few yards before Railway Station. Both of these outlets are crowded any time in the day.

After it, we started exploring different shops & landed at the National Handloom emporium. This outlet is few shops ahead of Janta Sweets. We could buy Rajasthani Garments, Laakh ki Choodiyan & few other items. After it, we spent some more time in the market. Then we returned back to our hotel by approx. 6pm. 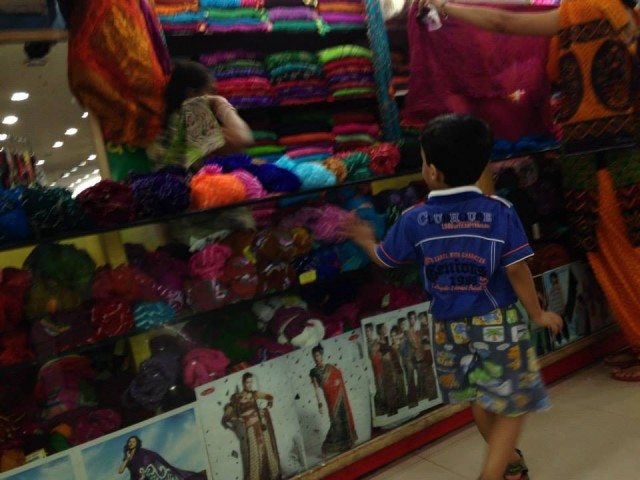 After a rest of approx. 1 hour, we left for dinner, which we planned to have at “On The Rocks”. This restaurant is located near Ajit Bhawan Palace & Circuit House. It is built from rock stones, hence comes the name. There are 2 blocks in this property, 1 is with Bar & other is exclusively for families. We went to 2nd Block & had our dinner. The restaurant serves both non veg as well as veg food & is quite popular. Due to bar, it is a great happening place in Jodhpur.

After dinner, we left back to the hotel. After reaching the hotel, we retired for the day, as another exciting day followed with return journey was waiting for us.

Day 1 was tiring as we could not sleep well in previous night train journey. Hence, we decided to start our day 2 little late. After our breakfast at our hotel, we called the cab & started for City Palace, also called Ummed Bhawan Palace. Probably the latest constructed palace in India, Ummed Bhawan is a great example architecture, royalty & Rajputana grace.

1 part of this Palace is residence of Royal Family, 1 part is converted into a hotel (Managed by Taj Group) & rest is for tourists as museum. A collection of Classic Cars of royal family is also for display for tourists. The collection also has the Car called “Ram Pyari”, used in shooting Amitabh Bachchan movie named AKAYLA.  Jodhpur airport, which is shared by Indian Airforce as well Airport authority of India, is also visible from Palace. One can see the fighter planes, the bunkers to park these planes and also take off & landing of these planes. 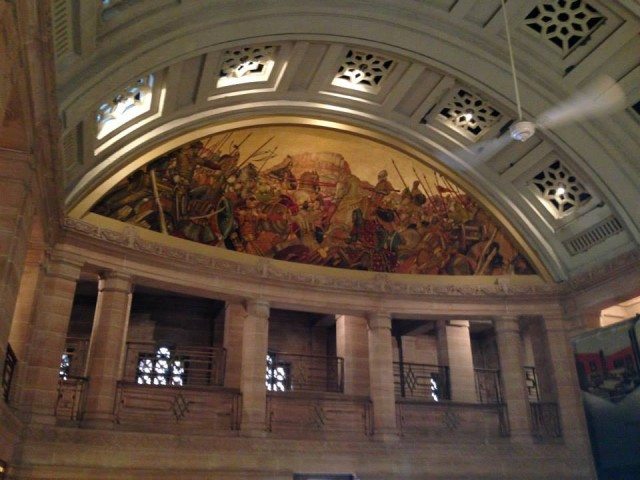 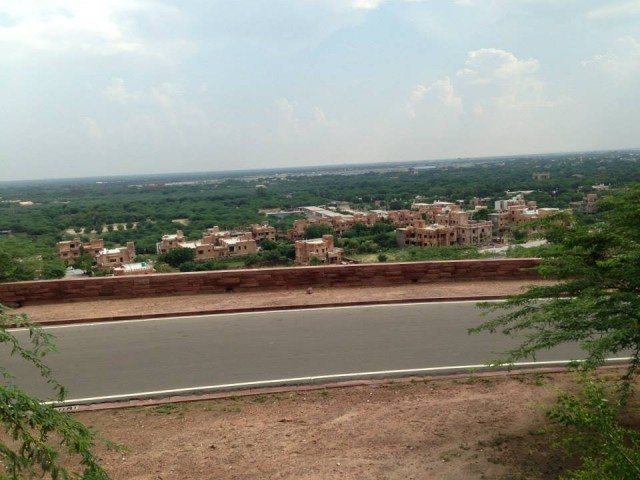 Since it was lunch time, we visited the famous GYPSY Restaurant at Sardarpura. This restaurant serves authentic Rajasthani vegetarian food & is a must visit. Restaurant serves only Thali & doesn’t serve Ala Karte. Food is unlimited & rich with Pure Ghee. Rajasthani dishes like Baajre ki Khichdi, Bati, Lahsun sabzi are unique. We ate till our satisfaction & left for hotel. 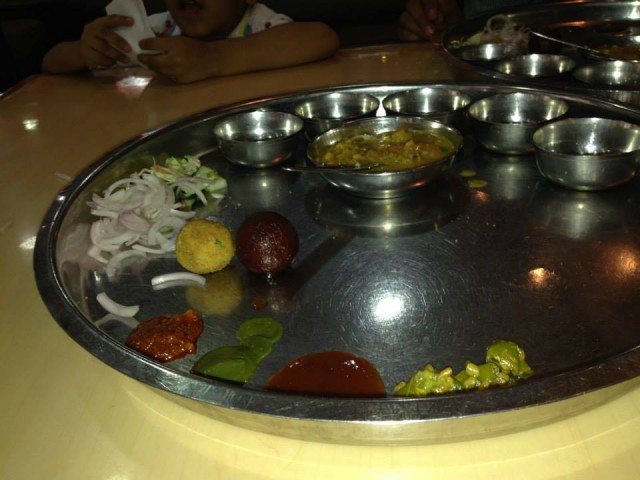 Our return train was at 7:30 pm in the evening. We left from hotel at around 6:30, visited Janta sweets for buying some sweets for home & reached station, where our train was already on the platform. This 2 day trip ended so fast but left us with lot of memories. With a promise to explore another Rajasthan city soon, we ended this trip.

Thank you so much for reading. Since I have been to Jodhpur many times, if I can answer any question then please do leave a comment.

Family trip to Jodhpur – Must do things was last modified: March 11th, 2022 by Pravesh