As I pulled down the glass, a chilling wind rushed inside, welcoming me, and telling about the atrocity, that the season is yet to offer in the coming days.
The driver said, “its how the time is ….welcome to Kashmir”
We planned it long ago, but somehow, it was not happening. The news, the climate, its like some invisible barrier. Then one day somebody got killed, people were on the streets, the afternoon sun might have seen some colours in the black and white panorama. I am not a political man, nor a magician…I just wanted to see the city, one last time.

I had been to this place thrice. It’s a love affair, spending a good time in my childhood days, wearing the pheran and strolling around the Dal gate on a bicycle. The clear waters of the Dal, back then was bright enough to capture the shadows of the Shankaracharya hills in ample hope.

The word hope has diverse meanings, yet mostly relative.
It was a daring attempt to visit Srinagar, with family. Everybody around me, were pretty much concerned about the socio-political condition of that place. Every other day, we get to know about the troubled scenario and the movement associated with this city.
The rain greeted us with a temperature of about 7 degrees, the time was 11.30 AM. We pre-booked a hotel and the owner sent a cab for a pickup from the airport.

The prime location of Srinagar, where the tourist movement can be seen at its height, is near the Dal Lake. The Dal lake is a huge natural waterbody, dotting Srinagar approximately to its east. There is a small waterbody called Nagin lake to it’s west. Both of these lakes are heavily populated with an estimated population of about 2.5 lacs. These waterbodies are the lifeline of this city, surrounding which (with a periphery of about 45 km) a, road has been constructed with ample footpath, for the cars and the pedestrians , known as the Boulevard Road. At many places, one can see numerous Chinar trees (Platanus orientalis or Oriental Palm), with their beautiful five pointed palmate designed leaves that creates a sense of true romanticism in the air. If you are visiting in November, the onset of winter and the receding autumn might create a surreal view in your mind.
Our hotel was just a 2 mins walk from the Dal lake. All along the lake, Ghats or artificial banks have been built (names as ghat-1, 2 etc), where one can board the shikara for a leisure cruising. Shikaras are small boats, with a canopy, that can accommodate four people comfortably. During the winter months, the boatmen keep blankets inside, which help to get rid the chill. 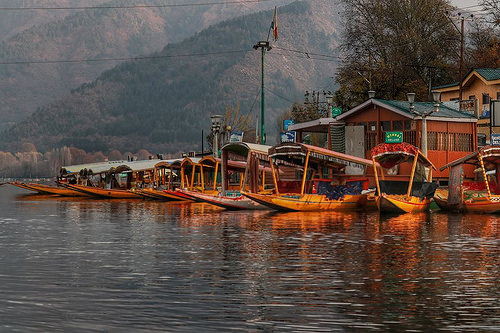 The fare of the shikara varies according to the season, and the number of point he/she, may wish to visit. There are points like, Nehru garden, Char chinar , floating garden, floating market or if you love birding along with cruising, you can pay the extra bucks to visit the open Dal for numerous migratory species.

For local sightseeing, the hotels arrange private vehicles. An innova may cost INR 1800 to 2000 per day, depending on the tourist flux.
As I wrote earlier, I had a great memory of Srinagar, when I was a child, back then the city was not that populated, as it is now. The beauty of this city lies in the secret of amalgamation, of the old with the new. A stroll along the alleys of the Dal gate reminded me of my long lost childhood, where, I used to play with the local children, and jumped into the abandoned shikaras to take a glimpse of the silvery fishes in the crystal clear waters of the Dal.
Now, it’s a commercial agenda, a city has to survive out from its romanticism. That’s what we all like to do, now a days.

Our driver( though he was a hotelier too), Sajjad, was a 25 year old chap, with a fantastic sense of humour, sometimes a bit dark…he was just the one I need for the road. He talked relentlessly about his heritage, the city, the way people think of Kashmir, sitting in their cosy home corners. The stones that occasionally get flung on the “other side”. The bullets, that creates ricochet , and the eyes of the school child, where the fantastic reflection burns like an ember.
I was just a tourist, and the city was made for the Gods perhaps… Human are too sophisticated for this place to endure.
Sajad said, “aaj tak kisi tourist pe koi aanch nehi aane diya hain humne, Kashmir, tourist ke liye hi to bani hain, aur… kashmiri o ke liye”
(Till date tourists remained unharmed in this city, Kashmir is for the tourists and for the Kashmirirs alike)
Along the Boulevard Road, a small detour can take you to the numerous beautiful Gardens of Srinagar.
Some of them are, nishat Bagh, Shalimar Bagh, Botanical Garden, Chashme Shahi or Mughal garden, Pari Mahal, etc.
All these gardens are maintained by the Government, and one can see them by paying a small fees of INR 20.
Chashme Shahi is famous for the natural mineral water spring that has got many anecdotes associated with it. I personally brought 2 bottles of that water, and consumed to get a healthy life…or afterlife…which ever it may deemed fit. 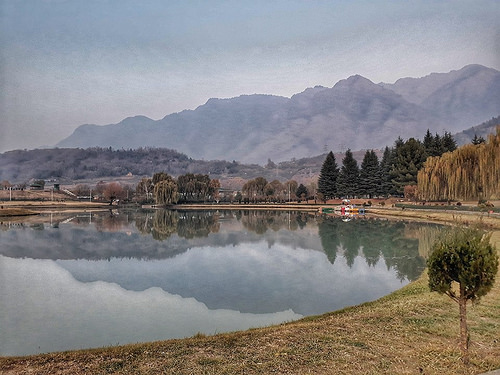 All these gardens has water fountain system, which gets activated during the summers or spring. If you are planning to visit this city during spring time, you may like to take a look at the Tulip Garden, which remain open for a short period of time, and certainly
worth a visit.

One evening, we decided to explore the Dal, and boarded the Shikara of Ashfaq Sahab, from behind the Dal gate. It was late afternoon, and incidentally the sky was clear, Ashfaq, our boatman, took us to a journey of dreams through the misty cold water, I would like to write the rest as a dialogue between him and me :-
Ashfaq:- “Dal is, being our livelihood since long, need to be the center of this city from its existence point of view.”
Me:- “what about the water? Do you think it needs proper cleaning?”
Ashfaq:- “The Lakes and Waterways Development Authority are trying their best with modern machines and equipment….but, there are a huge number of people living inside the lake, the wastes accumulate here can create devastation”
Me:- “what’s the mean of disposal of waste from houseboats?”
Ashfaq:- “ Its pity, many dispose the waste directly to the water.”
Slowly we travelled towards the Nehru garden, it’s a small island, where you can take photographs wearing the traditional Kashmiri attire, and have your coffee from the J&K Tourism Restaurant. There is a small book store inside, for to sit and read a while. 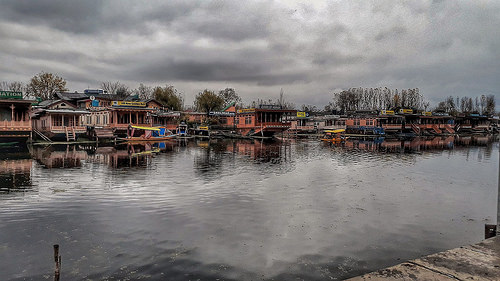 Ashfaq:- “ This is a floating market, you see its so vibrant during the summers, but during these days, power cut is a big issue…..we have so many power, but hardly we can use them”
Me:-“ what’s the reason? That power is an issue in this place?”
Ashfaq told me the same old story, that the people in the valley talking about. I am just a listener, and for a prolonged period, hearing the word “Indian” makes you foreigner to this land. But its just a state of mind, as statistically India contributes to a huge number of tourists in this part of the country.
Ashfaq:-“People in Kashmir, love the way the wind blows, the aroma of the hot Kahwa, sipped through the silver goblets, and takes us miles away from the strife and the horrors. We are suffering since long”
It was almost dark, the silhouette of the great Shankaracharya temple was above us. The chill was unbearable and the blankets that Ashfaq provided were not enough. We saw the amazing floating vegetation, known as the “floating garden”, which has become a place for cultivation and habitation.

Ashfaq:- “ that’s why , You know? They don’t refer to this place anymore, people are occupying the patch for permanent settlements.
On the next day, when we were on our way towards Pahalgam, Sajad, told us much about the Kashmiri rice, “its red, its sweet, and its divine”, my bad luck, never got my chance to dig my teeth into one…literally.
On the contrary, he took us to some shops for good quality Saffrons ( cultivated in Pampore, near Srinagar), and local traditional handicrafts showrooms.
If you like to eat non vegetarian foods, this place can be just right.
The Kashmiri Wazwaan, with rogan josh, rishta, gustaba,yakhni and kanti kebabs, prove the rich culinary traditions of the state.
“kaisi lagi Kashmir jenab? Do you think we are that bad as a host? I tell you, during those times, I took tourists for sightseeing, and stayed till midnight, stones were all around, my wind shield got cracked thrice a day, but all….all of the tourists were safe”
Sajad was every jovial right from the beginning.
“tell me how do you like Kashmir?”
I said….I like Kashmir, like the mist on the evening waters that descends slowly from the sky, kiss the water, stay there for some moments….till the sun, comes and soak it away with his might….
I have been to Kashmir Thrice…and I assure you….you must… at least once….for I am the one, who will go back once more……

I am Sanjay Bose, an engineer by profession. My passion is photography and travelling, visiting places that is offbeat, or even blend into the local culture of a city. Life for me, is to see and explore the possible boundaries of the nature, up till the limit, that my own self permits. It's just a life to spare...But so much more to see...to learn...

This is part 2 of my previous blog on the same place. You can read that by clicking here : Sin City and More…