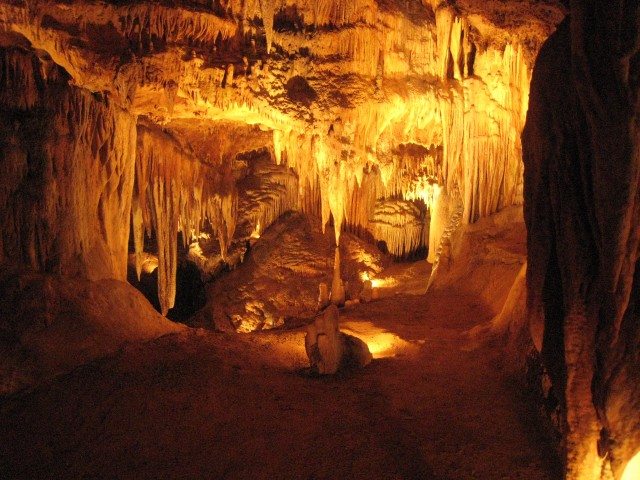 Luray Caverns is a world famous sub-terrestrial natural wonder that attracts millions of tourists every year. Located about 95 miles (~2 hours) southwest of the nation’s capital (Washington D.C.) in the Shenandoah Valley, this is an absolutely must one-day trip if you are around the area. Most people visit it on their way to or from the Shenandoah National Park in Virginia.

There is something magical about the formations of stalactites and stalagmites that will make you marvel at the artistic wonders of nature as you witness the evolution of millions of years worth of limestone artistry. It is said that more students visit this cave every year for educational reasons than any other cave in the world. The National Park Service and the Department of Interior designated Luray Caverns a Registered Natural Landmark, marking this as a valuable site illustrating America’s natural heritage and contributing to a better understanding of the environment. 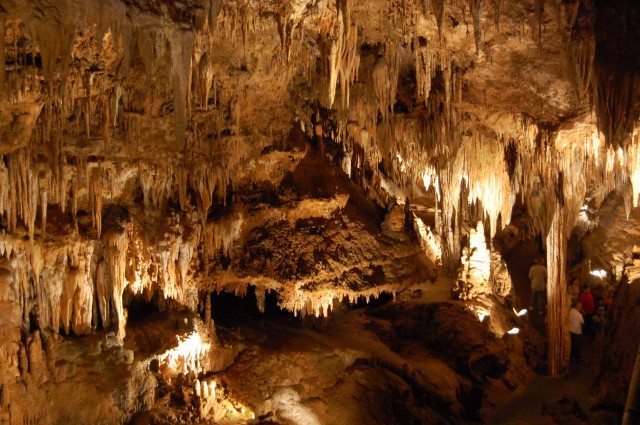 The tiny people below gives a perspective of scale, and the largeness of the caves

Luray Caverns was discovered in 1878 by a tinsmith and a local photographer called Andrew Campbell. As the story goes, cold air rushing out of a limestone sinkhole blew out a candle Mr. Campbell was holding. He and his group (including his 13 year old nephew) started to look for a cave, digging loose rocks for four hours before the candle blew off.

When they discovered the cave, they slid down a rope inside it, discovering the largest series of caverns in the eastern United States. They were the first people to see the caves by the candle light. Their discovery was a secret for a while. When word got out, there was a sudden rise in the value of property around the area. Soon, the Smithsonian Institution had sent a delegation of scientists to examine the formations of the caves. According to the reports, they said,

“…..it is safe to say that there is probably no other cave in the world more completely and profusely decorated with stalactite and stalagmite ornamentation than that of Luray.” 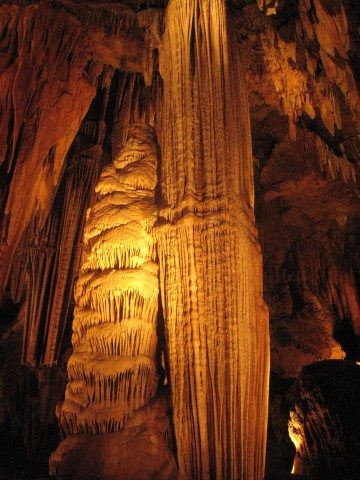 The caves resulted from the accumulation of layers of limestone over millions of years. The caves are confined to a 100 feet thick zone. Rain water trickles, dissolving the carbon dioxide to make a mildly acidic solution of carbonic acid (secondary school chemistry, people). The acidic water percolates through the limestone, eroding layers and carving out shapes in the cave.

A precipitate of lime forms, making stalactites from the ceiling and stalagmites from the ground join together to form limestone pillars. It is like witnessing a chapter out of a Geography textbook right in front of you. This is an active cave and new deposits are formed @ one cubic inch in 120 years. 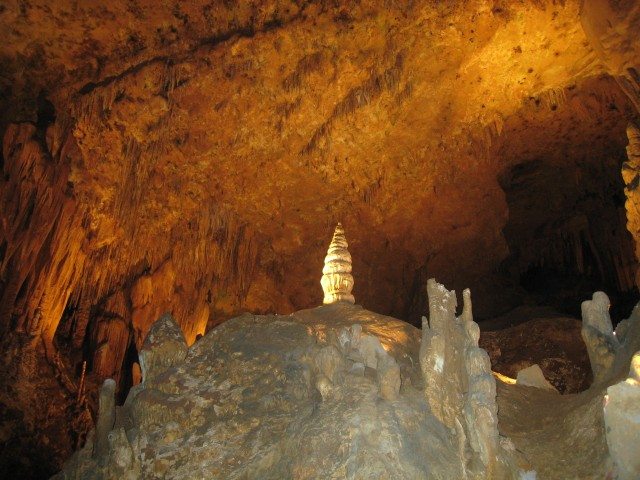 Some of the decorations are also a result of mineralized water spreading over the pillars and limestone walls. They result in shapes that would amaze you- frozen waterfalls, jaws and dentition of large animals, mollusks, draperies, veils, fallen tree trunks, and even fried eggs. While some of the shapes are very clear (for example, waterfalls and fried eggs), the others go as far as your fertile imagination can go. 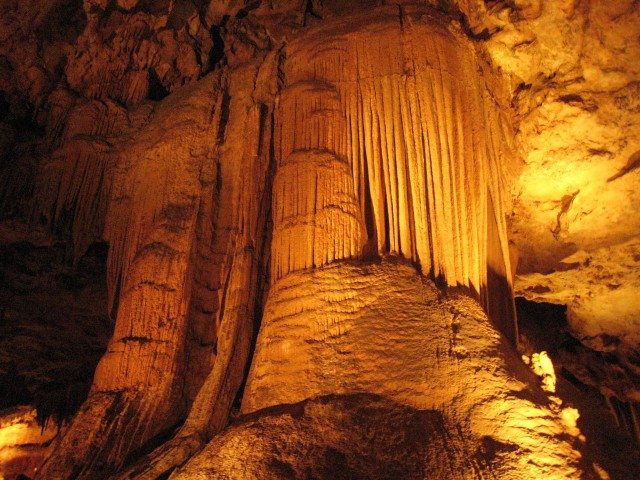 The hour-long tour inside the cave consists of well-lit paved walkways through cathedral-sized rooms. The ceilings are ten storied or even higher. The caves are divided into enormous chambers filled with towers, draperies, columns, and the wishing pool. Here are some of the main structures inside the caves.

Titania’s Veil: These are white and shimmering formations of crystalline deposits named after Shakespeare’s Fairy Queen from A Midsummer Night’s Dream.

Pluto’s Chasm: This is the main horizontal channel in the caves caused due to erosion that happened over 400, 000, 000 years ago. These chasms are over 500 feet long, and the acidic reactions dissolve up to 1/10th of an inch of limestone per year. 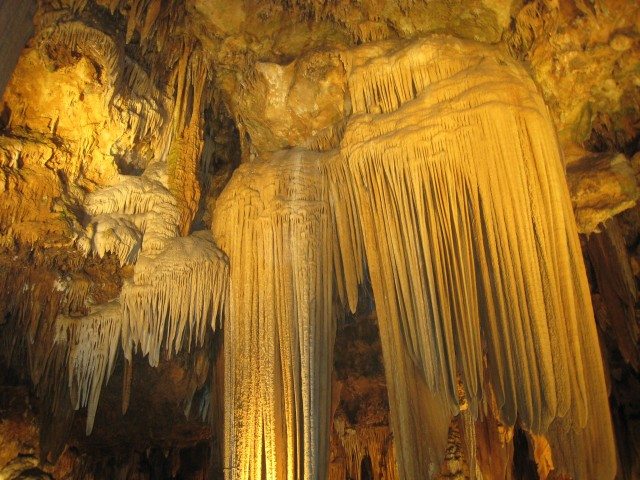 Saracent’s Tent: These are structures resembling scarfs and shawls. Some of them are pristine snowy white in color. They are so thin and translucent that a candle held behind them could reveal all the structures within. They appear smooth and flowing, and are one of the most perfectly formed curtain-like structures in the world. They give an appearance as if see through sheets were parted like an entrance to a tent, giving it its characteristic name. 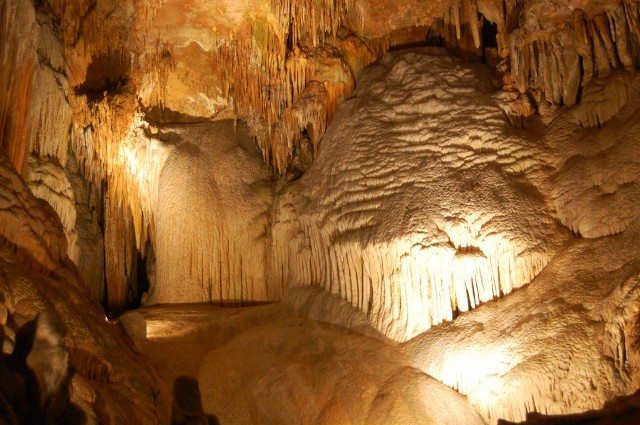 Frozen Fountains: They are the purest form of naturally white limestone that look like fountains that have been frozen and made into ice. This is formed due to water dripping through the ceiling for thousands of years, forming huge stalagmites. 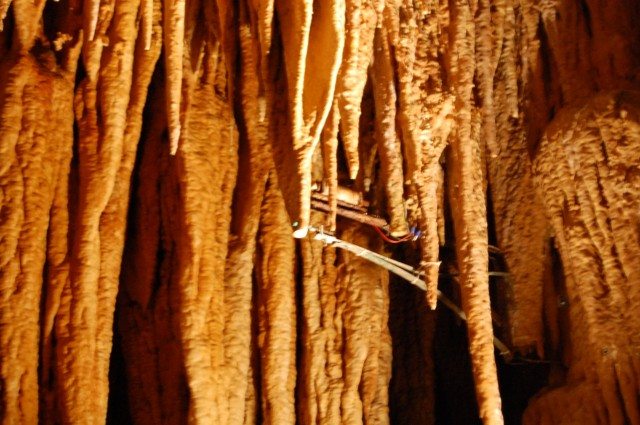 Wiring in the stalactites for music

Stalacpipe Organ: I found this as one of the most interesting structures in the caves. It is located in the Cathedral, and is the world’s largest musical instrument. The concept is fascinating. Stalactites covering 3.5 acres of the surrounding caves produce sound of symphonic quality when electronically tapped by rubber-tipped mallets. This was designed by a mathematician and electronics scientist at the Pentagon named Leland Sprinkle. When he visited the caves with his son, he heard organ-like sounds of a stalactite being tapped. He came up with a highly complex and sophisticated plan for a stalactite-tapping instrument.

He spent 3 years searching the vast chambers of the caverns to select stalactites to match the musical scale, and 36 years to research, design, and experiment. After all this time, he found only two stalactites that naturally matched the tunes. Hats off to such dedication and motivation. The console of The Great Stalacpipe Organ was installed and connected to the various stalactites with over five miles of wiring. The organ plays a variety of songs while the haunting chords reverberate through the ceilings in the caves.

This is the world’s largest musical instrument, and makes music of concert quality from the surrounding stalactite formations. You have to see it and hear it for yourself to believe the incredible result of a natural wonder and man-made designing. The organ can also be played manually from the console. 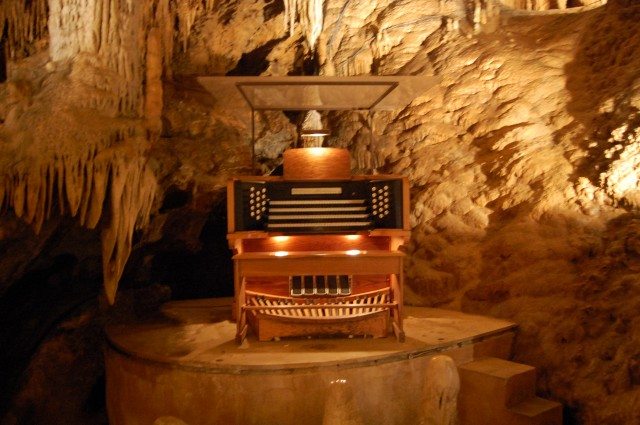 Double Column: These are the largest rooms in the caverns. Standing close to 47 feet, these are the tallest and most spectacular formations in the caves. The colors of these, and those throughout the caves, are natural, formed by the mineral deposits of the seeping underground water. The ceiling alone is more than 60 feet high.

Empress Column: This is a massive white stalagmite formation that looks spectacular ! 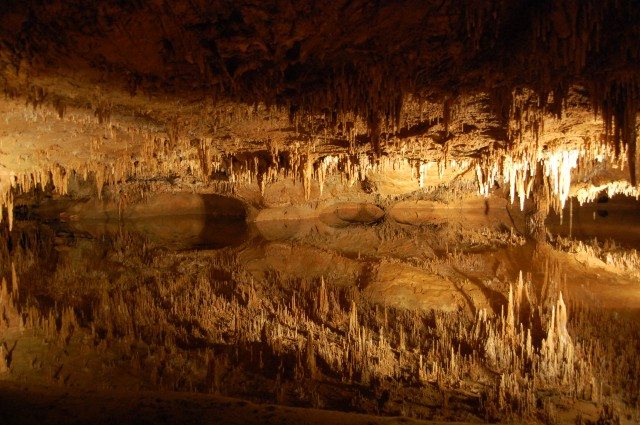 Dream Lake (the lower half is the reflection in clear water)

Dream Lake: The largest water body in the caverns, they are not more than 18-20 inches deep, and the crystal clear waters of the lake reflect forms and creates a mirror image of the stalactites hanging from the ceiling. The water is so pure and sparkling that you would not believe that half of what you are seeing is a mirror image. 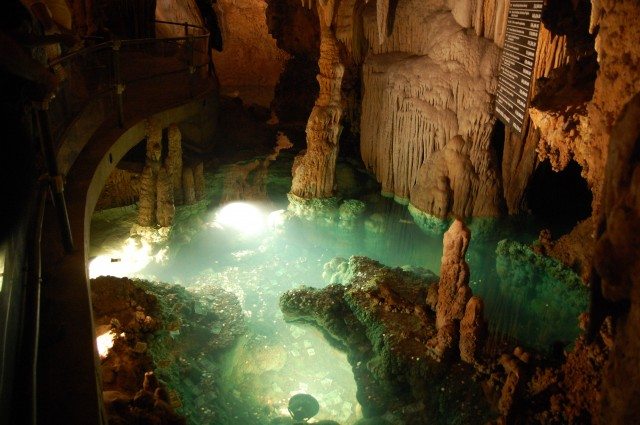 Money collected over the years from The Wishing Pool

Wishing Well: This is a green pond where people toss coins and bills 3 feet deep at the bottom. While the dream lake looks deeper but is not, the wishing well looks shallow (3-4 feet deep), but is actually deeper (6-7 feet). There is a board with estimates of the hundreds of thousands of dollars collected from the pool every year. 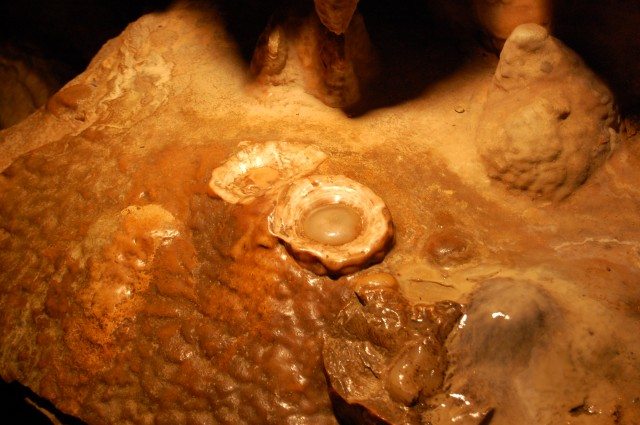 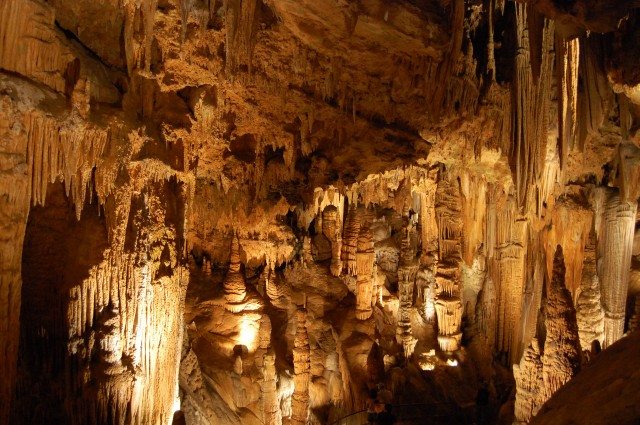 Thousands of other interesting structures include pillars, adornments, folds, fountains, cascades, flowers, and so on. Allow yourself to spend a few hours inside the cave, marveling at the awesomeness of nature that carved intricate patterns and designs over the history of time, leaving an ornate result of artistry one can only gape at with fascination and incredulousness. 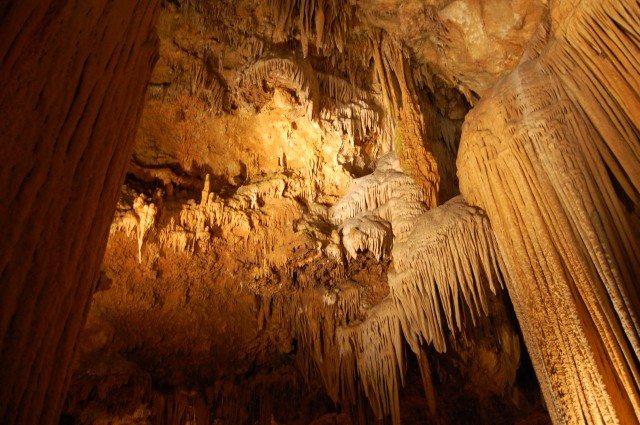 General admission rates are roughly $23. This includes entry to the caverns, one hour tour of the caverns, entry to the Car and Carriage Caravan Museum (a nice place to spend some time, but nothing like the caverns), and access to the Luray Valley Museum. There are discounted rates for children, senior citizens, groups of 20 or more, and student groups of 15 or more. One can purchase the tickets online, or upon arrival. It is open every day of the year, between 9 am and 5/7 pm (depending on season). For more information, you may visit this site.

Caves, rock formations, and geology in general is fascinating !!

Source: pixabay INDIA– A divergent country commonly known as the land of vibrant colors. There are various incredible places to explore and fantastic things…