I woke up early in the morning on Diwali day, refreshed after a good night’s sleep. My body badly needed it after a hectic day, reaching Coorg. Being used to it back home, it was strange not to hear the continuous bursting of crackers early on a Diwali morning. May be people in Karnataka, like those in the North of India,  celebrate Diwali the day after we celebrate it in South India or may be it wasn’t the most important festival in the region. I was to get my answer in the evening. With my wife still asleep, I ventured out for an early morning walk into Madikeri town. Once out of the hotel, the biting cold reminded me that I was in a Hill Station, even though not one as high as Ooty or Kodaikanal. Finding not even a single tea shop open, I sneaked back into my room and switched on the TV.

As the sun was breaking out, I texted back to all the Diwali messages I had received overnight. I called my mother, my sister’s home and  my friends wishing them on the auspicious day. We got ready around 8 AM and came out to have breakfast at the in-house Poornima Restaurant. Our driver had got ready by then and joined us. We all stuck to our preferred South Indian dishes of Dosa and Pooris and the taste didn’t disappoint us. Here I must add that the Vegetarian dishes in Karnataka, especially the tiffin items, are much tastier than in other parts of the South, though the Sambhar and Chutney tend to be on the sweeter side. Also the prices in restaurants here are much cheaper than in TamilNadu. Our breakfast for three cost us just 130 Rs. The hotel in which we stayed, Hotel Chitra, is a safe and decent budget option for families. My Deluxe double room cost me 900 incl. tax which I found to be slightly on the higher side. But the room was spacious and room service pretty good. Also being festival time, I couldn’t bargain much. Coming in the off-season ie monsoons, I think one can get the same rooms at half the price.

This is what a good night’s sleep does to you

Hotel Chitra, where we stayed

Every visitors’ must-see destination in Coorg is Talacauvery and that is where we were first heading to. It is the birthplace of River Cauvery and is 48 kms from Madikeri Town. I had hoped to start around 7.30 Am to reach the place early and enjoy the surroundings before the rush started. But since Madam had overslept(!)our start got delayed by an hour.  We stacked up on some snacks and cool drinks before we left Madikeri. 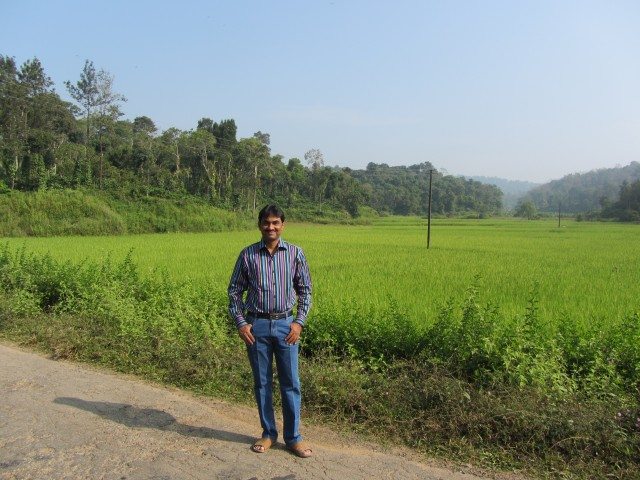 Here is some information on TalaCauvery. It is a place widely considered to be the source of the river Cauvery and is located by the Brahmagiri Hill in Kodagu District of Karnataka. There isn’t any permanent visible water flow from this place to the main river, except during the rainy season. It is situated at a height of 1,276 metres above sea level(which is 200 m higher than Madikeri). A tank has been built at the place which is said to be the origin of the river. There is a small temple on one side of the tank, where the pilgrims offer puja. The river supposedly originates as a spring(right in front of the small temple) feeding the tank. The waters then apparently flow underground, to emerge as the river Cauvery, some kms away. The temple has been renovated extensively as recently as 2007.(Courtesy: Wikipedia).

After driving through hilly terrain and lush green farmlands, we reached Talacauvery around 10 AM. The packed car parking area indicated that a decent crowd was already in the temple. On the way is Bhagamandala temple, which we decided to visit while returning from Talacauvery.

Entrance to the Talacauvery temple complex 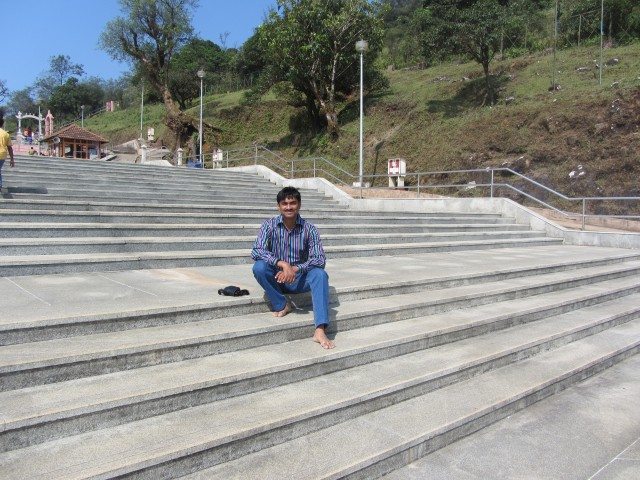 On the steps leading upto the birthplace of Cauvery

There was a small queue at the little temple in front of the pond, the birthplace of Cauvery river. Pilgrims offer puja there to Goddess Cauvery. Some throw coins in the spring in front of the deity. The guards at the place implement strict restrictions on pilgrims, who are allowed to take bathe in the pond but not swim and frolic in it. Strangely, the guards too barred me from taking pictures of the actual frontal view of the tank and the temple. So, I am providing you a couple of pictures of the water tank/pond and the temple on its side, downloaded from Wikipedia which illustrate how much the place has changed over the years. 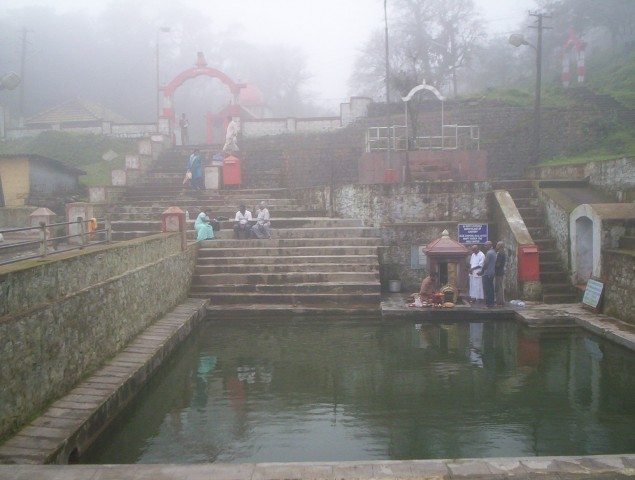 An old file picture of Cauvery Janmasthan at Talakaveri(wikipedia) 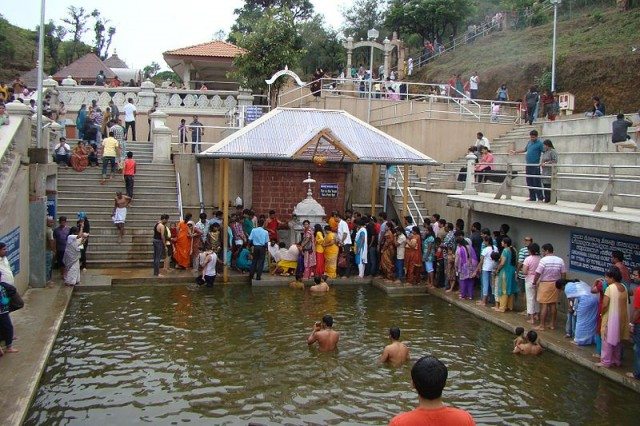 After offering our pujas to Goddess Cauvery, we reached the next level of the temple complex where the temples of Ganapathi and Shiva are located and offered our prayers. The temple here is also dedicated to Lord Agatheeswara which denotes the link between Cauvery and Sage Agasthya. 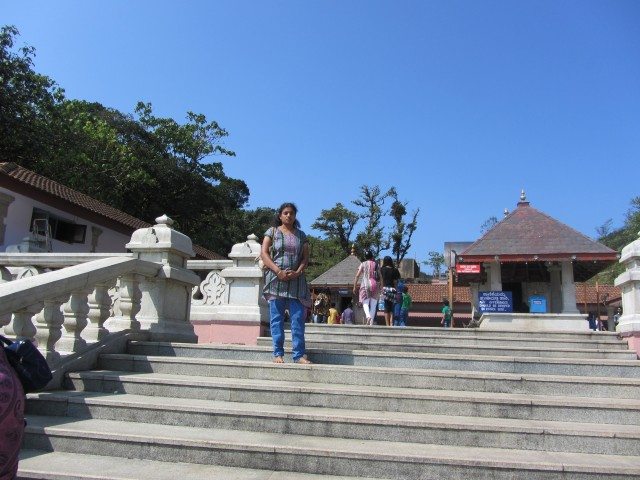 Another major attraction of Talacauvery is the Brahmagiri Hill, situated right beside the temple. The top of the hill can be reached by a series of well laid out concrete steps. The steps must be around 300 and apart from the very elderly or the sick, it is not too difficult a climb to reach the top. After resting for a few minutes at the base of the hill, we started our climb. There was a big crowd of all ages climbing along with us. The weather was pleasant and the views of the temple complex and the surrounding hills got better and better as we reached the top in under 15 minutes. 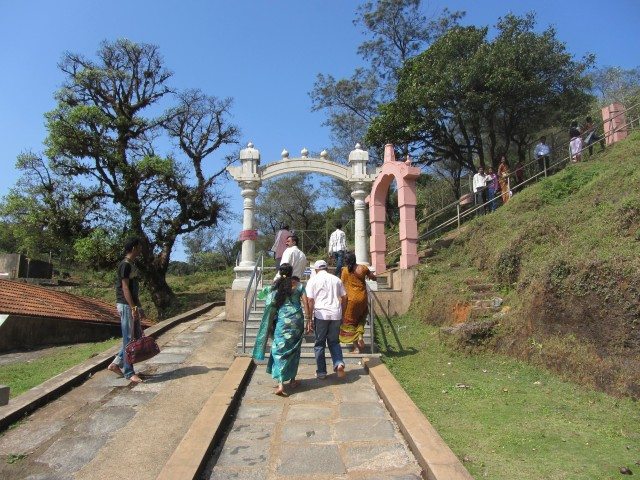 The start of the climb to the Brahmagiri Hill 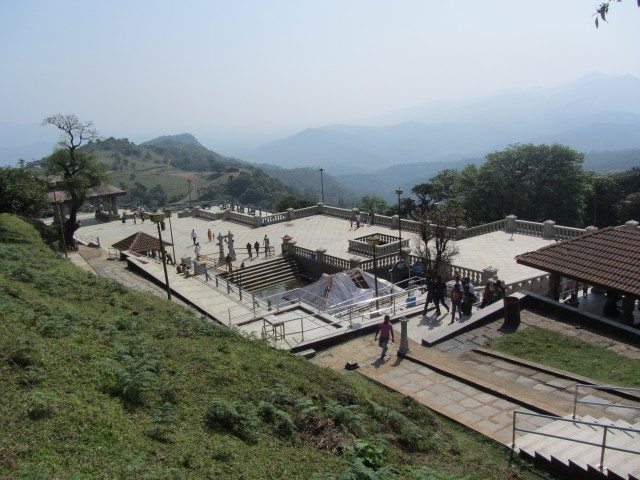 View of Talacauvery temple on the way to the Hill 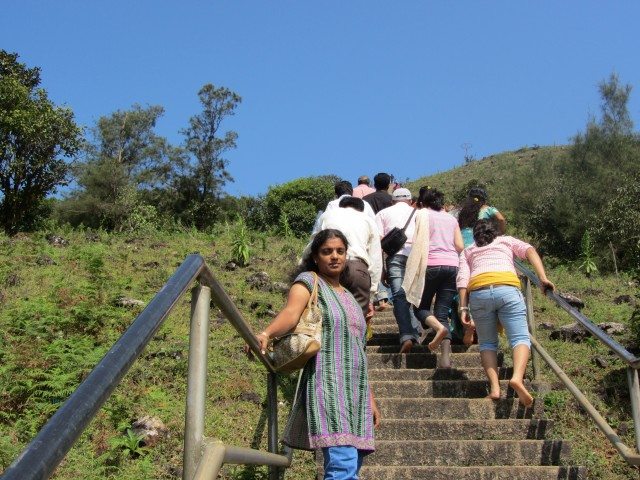 No shortage of company on the way up 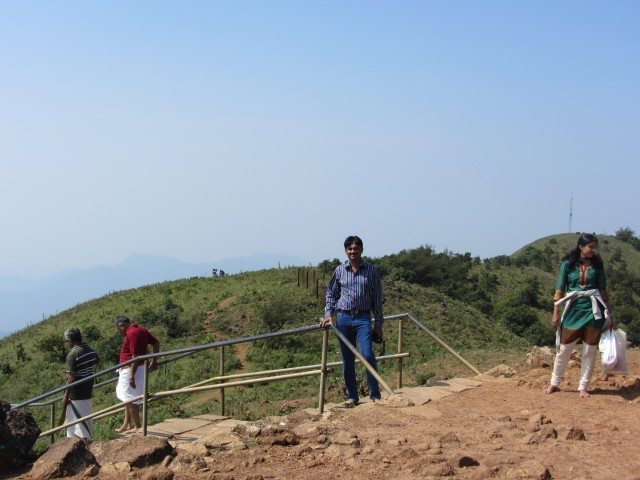 The views of the Brahmagiri Range from the top of the hill are amazing and well worth the climb. There was a large crowd at the top enjoying themselves taking pictures of their groups, from various parts of the hill. We too clicked a lot of pictures at the top. Here are some of them. 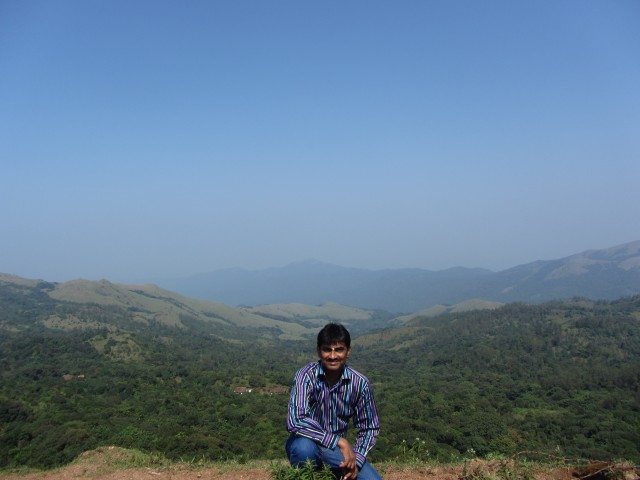 Views of Brahmagiri range from the top of the hill 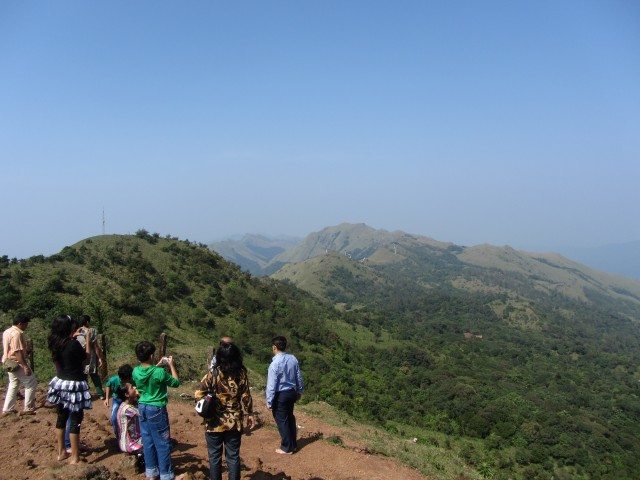 We could see the windmills in the distance 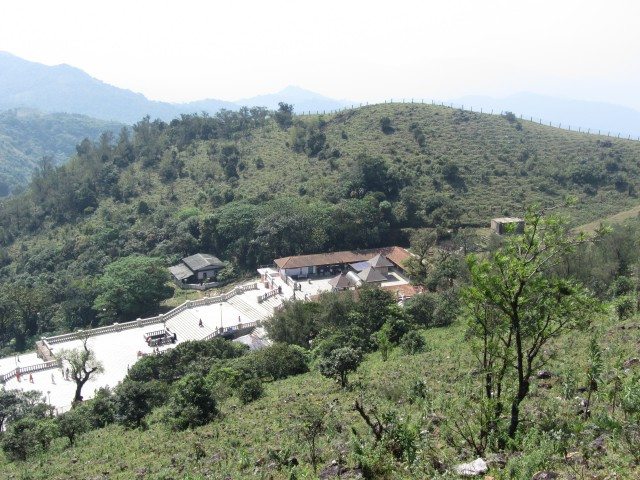 View of Talacauvery from top of the Hill

After almost an hour at the top, where the snacks and Maaza came in very handy, we climbed down and started our journey back. We reached Bhagamandala, 8 kms from Talacauvery around 12 Noon.

Bhagamandala is a pilgrimage place situated by the river Cauvery. It is also called the Triveni Sangama by the local people, beacause the river Cauvery is joined in this place by two tributaries, the Kannike and the mythical Sujyoti river. By the banks of the river I could see some families performing rituals for their ancestors. Not too far from the river banks is the Bhagamandala temple.

We freshened ourselves in the crystal clear waters of the Cauvery and had a peaceful darshan at the temple. The whole architecture and atmosphere at the temple resembles those of the temples in Kerala. The limited crowd inisde the temple was a blessing after what we saw in Talacauvery. The mid-day heat was baking us and thankfully tender coconuts were aplenty to cool us. With the mandatory purchase of souvenirs done, we started our drive back. 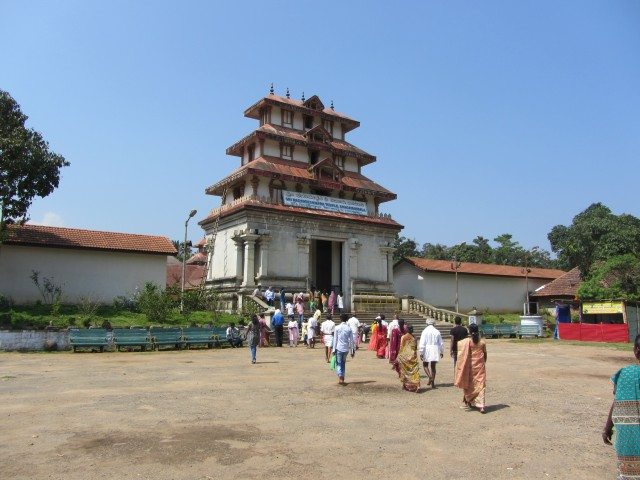 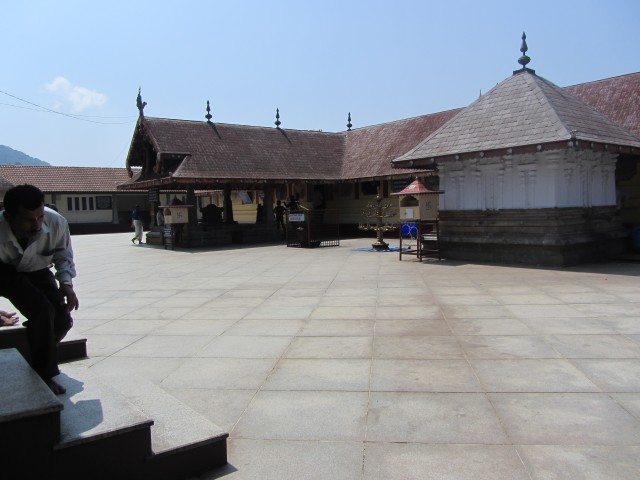 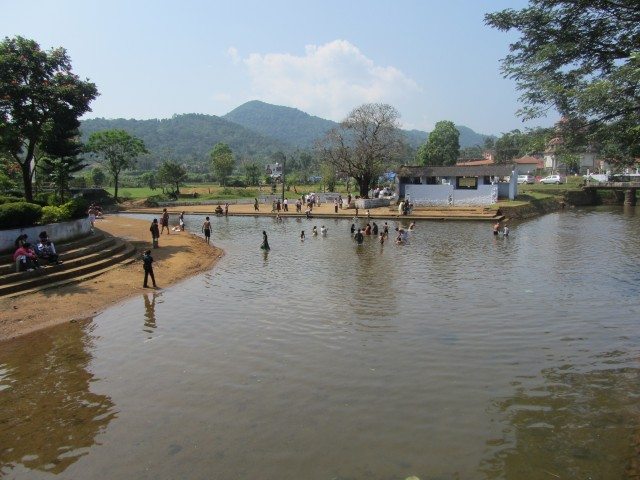 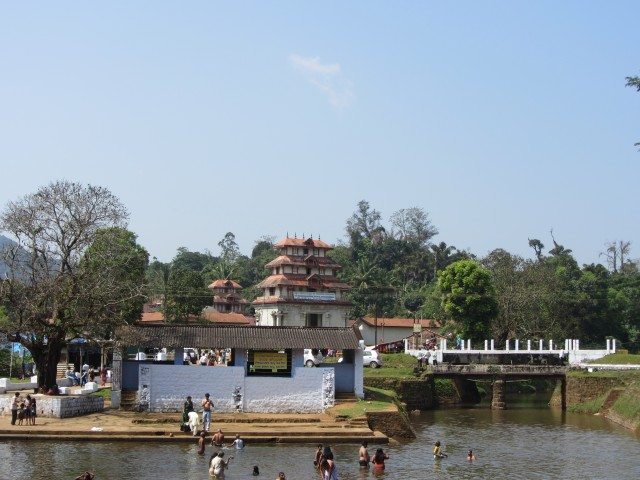 View of the temple from the Triveni Sangama

We were too tired to admire the views on our return journey.It was almost 2 PM when we reached Madikeri.  The locals recommended Athithi Restaurant for a homely vegetarian lunch. Yes, you read it right. We were looking out for a Vegetarian lunch, because it was Amavasya day and on that day non-veg was strictly off limits. Sure enough the restaurant,  popular among both locals and tourists, lived upto its reputation. The rice accompanied by traditionally cooked Sambhar, rasam and vegetables were a treat and reminded us of our home. The service too was excellent and at Rs.60 per head, it was a steal. No doubt, this is the preferred Vegetarian restaurant in town.

After such a fulfilling lunch, all we could do was head back to our rooms for a nap. A visit to Dubare Forest Camp was in our agenda for the evening. Details of that in my next post.

Coorgi Delights – Talacauvery and Bhagamandala was last modified: May 28th, 2021 by Venkat

I put on my eye gear, tied my hair tightly and let Ellis attach me to his harness. We were waiting for our pilot to sign us when we would reach the 12,000 ft mark and as he waived a Thumps up….Oh F***, we have to jump now….NOWWWW!!!!!!….we crawled our way to the entrance of the plane, I could see the Palm Jumeira view and he said Jump….I bent my knees, jus couldn’t think anything and I jumped….we both jumped together, the freefall was amazing, the cool air dashing my face. Was I flying?? Have I reached heaven???? Is this really happening??? Am I a bird???? Wait wait wait….I was so shocked by the whole experience, so stunned by the beautiful views of Atlantis and Palm Jumeira and the lovely infinite blue and green ocean…..its just like a different world….Mind blowing !!!!!