To kahan le chalen aaj aapko… I’ll take you all on the virtual trip that had been talked about by Swami Vivekananda and Swami Ramtirtha also.

I woke up quite early next day and along with my wife went for a walk. Kids were sleeping and the situation was same when we returned after half an hour, one change being Vishal was awake. His first question to me was what to have for breakfast? We decided to have a light breakfast of biscuits and tea(milk for the kids) and then go for our  excursion. I had thought to begin this trip from KHEER BHAWANI temple. At about 9.30 A.M we were finally ready( you know how it goes with kids) and were seated in the Qualis of Mr. Bhajji. When we got on to the main road on our way to the temple in Srinagar itself I observed many local buses plying in the city. Buses were quite decorated similar to the truck art decoration style in Pakistan. Only Urdu was written as route name so I could not understand but from the voice of conductors in various buses came to know about areas like Khaniyar, Bemina, Lal chowk (I had heard and read about this), Hazrat Bal, Habbakadal etc.

At that busy chowk I had tried to ask some passerby , the way towards the temple but could not be successful as they spoke in Kashmiri….. As it was busy chowk I was not keen to have a traffic jam there so instructed Bhajji to turn right from there , pass Hazrat Bal mosque on the way and get out of the city. After coming out of Srinagar we got to know the exact way to the famous temple. I observed that not many tourists at that time were visiting the temple for reasons unknown to me. Qualis passed through 3-4 villages on the way. The villages were beautiful , typical pahadi villages. We passed on the way in the city itself, landmarks like Hazrat Bal mosque, Nagin lake, Kashmir University and Nagin club but these were not our destinations at that time.

After about one hour we reached the temple complex.

Devi, MahaRagya was pleased with the devotion of Ravana and gave Darshan to him. Ravana installed a statue of the Devi in Sri Lanka but displeased with the misdeeds of Ravana , the goddess instructed Lord Hanuman to brig back the statue from Sri Lanka and place it at the sacred pond of TulMula. Historian Kalhana also mentions the place in his “Rajatarangini”.

MahaRagya Devi is considered to be the form of Devi Bhagwati. The temple is considered to be the most sacred pilgrimage of Kashmiri Pandits. It is said that Kashmir’s Yogi Krishna Pandit rediscovered the place after the Devi gave her Darshan to him in a dream. Historically, it is believed that Swami Vivekananda and Swami Ramtirtha had visited this temple in their days. It is believed that the water of this sacred spring present at this place can give indication of the times whether turbulent or peaceful. Brackish or dull water indicates towards turbulent days ahead. 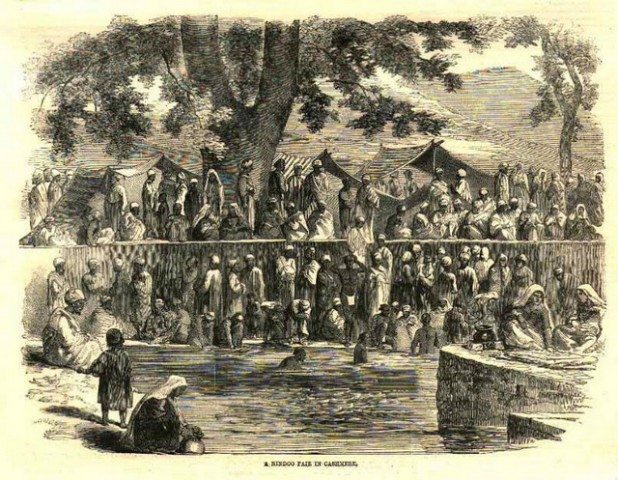 Another Kashmiri Pandit, Krishna Taploo is also said to have dream of a serpent goddess, same Devi Maharagya and he was also led to the marshy land of those times. Slowly the word picked up and the place became the most revered one for the Pandit community of Kashmir. The place has been talked about by British chroniclers also:  The temple has got a mention in the writings of Walter Lawrence, the land settlement commissioner to Kashmir in 1888.

The modern premises and the temple itself is said to have been completed during the times of Maharaja Pratap Singh.

A view of the temple

We reached the temple passing through the town of Gandarbal and many picturesque villages in the countryside. One can catch a glimpse of rural Kashmir life on this way en route. After about one and a half hour we were in front of the temple. We had been questioned 2-3 times on the way by paramilitary forces as they thought that we were proceeding towards Sri Amarnath Yatra unofficially as the Yatra had not started till then. As we had no plan as such, it was duly told to them. The unique special point of this sacred place in my viewpoint is amalgam of modernity and antiquity. 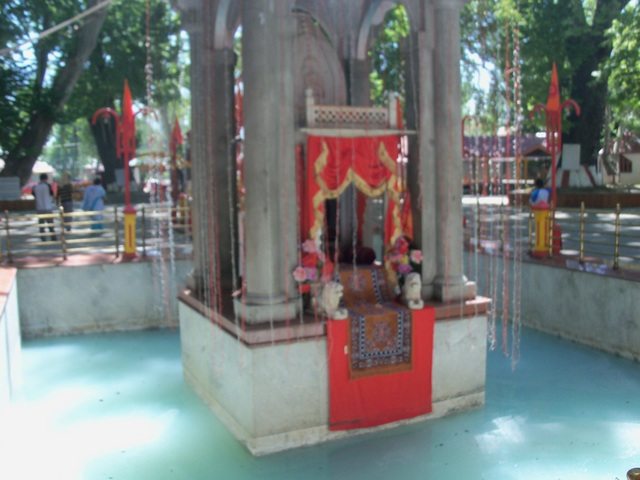 Another view of the revered temple

A fully marbled structure within a sprawling courtyard represents today’s temple with a Shivalinga and idol of Devi installed there and on the same note huge Banyan trees , serene and calm environment, fewer number of pilgrimages (at that time) and chirping sounds of birds gave the place embedded in antiquity. The premises now is heavily guarded by paramilitary forces Indian army men  Just outside the entrance one can found numerous shops selling Parshad and eatables. A few shops are to be found inside the complex also. Firstly we all paid our salutations in the main temple. Apart from us one Kashmiri Pandit family comprising 10-12 members was there and after a brief chat with one of the members of that family I came to know that the family had left the valley and different members are now settled in Mumbai, Delhi and abroad and they come to the temple as their annual pilgrimage to perform Puja and visit their native homes also. After staying there for sometime we paid our salutations to the sacred Sarovar there and rested for  while under the huge Banyan tree. 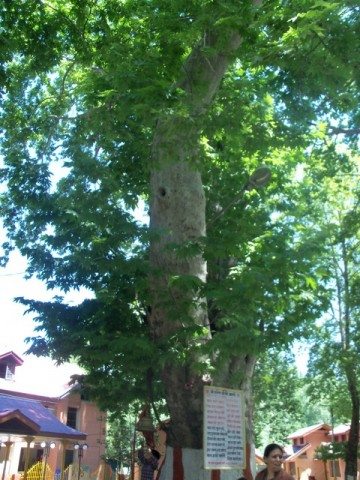 The famed tree at the premises

Another view of the tree at the complex

Ab to bhookh bhi lag rahi thi sabko… There were a few shops inside the premises selling breakfast or we can say brunch items. Kids wanted to have poori chana with halwa. Myself and Vishal decided to have finger chips (french fry). While observing those chips, we found that these were more fair in colour than the usual finger chips. (May be , we were in Kashmir afterall…). We took about 250 gm of these chips and while taking first bite of it I found that these were a bit hard to bite. When I inquired about this from the vendor then we found that those chips were prepare from lotus root (kamalkakkdi) and not from dear potatoes. People there used this vegetable to prepare the chips. It was with very difficulty that we ate those finger chips as I usually don’t relish lotus root. Anyway the divine experience of that place made us forget lotus root experience. After coming out of the temple complex all of us including Bachcha party relished the cold drinks and made plan to visit Dal Lake as our next point. Yes, we certainly took Parshad of Kheer inside the temple. 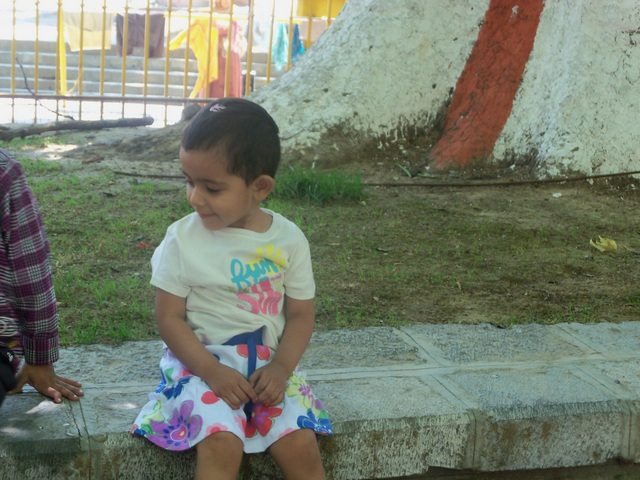 Dear Pavani at the temple

A lot of people wanted food from this restaurant, and so it took me a good 20 minutes to get out of there with food in my hands, and those 20 minutes were for this microscopically tiny plate of little strands of crispy-fried pork. It was like a golden fried piece of heaven. It had been deep-fried, thus the bacon had gotten crumpled up, but the flavour of the bacon had been retained. There was an almost silky, foreign taste of the oil used. It wasn’t anything in particular. My first guess was olive oil, but it was somehow tangier than that, with a hint of almost a peppery taste in it. One more plus point was that this one wasn’t too salty at all, which is generally the problem with bacon – usually the salt overrides the taste of the bacon. This was, as previously stated, like a crisp-fried piece of heaven.