Thekkady Wildlife Sanctuary is a popular travel destination for travellers all over South India. Somehow, a visit to this place had eluded me all these years, in spite of my city, Tiruppur, being just 250 kms away. I decided to visit Thekkady during the Diwali holidays of 2011, since being the tail end of the monsoon season, Kerala would be lush green. Also, I wanted to avoid the Sabarimala peak season rush starting from Nov 15th and continuing till January 20th every year. Initially my co-brother’s family agreed to join the trip and it was decided to do the trip by a hired vehicle. But they opted out because of limited school holidays to their kids. Also, persistent rain in our city right until Diwali day was a huge dampener. As Diwali neared it was apparent that it would just be me and my better half who would be making the trip. I decided to try my luck with Railways Tatkal tickets and got two tickets from Tiruppur to Kottayam for Oct 26th night. The return tickets were booked from Kottayam for Oct 29th night. I booked a Tata Indigo cab for 3 days through Kottayamtaxi.com.

We left Tiruppur on the night of Oct 26th and reached Kottayam Station at 6.30 am. After freshening up, I called the cab people and our Tata Indigo arrived promptly (1300 Rs per day-125 kms per day free-every additional km charged at 8 Rs). After a nice, simple breakfast at Anand hotel near Kottayam City centre, we proceeded to our first destination Idukki Dam, 105 kms away. The route from Kottayam to Idukki passes through Ettumanoor (has a famous Shiva temple), Pala and Thodupuzha. We reached Thodupuzha in an hour and from there the hills start. Just as we approached Thodupuzha town, it began to drizzle. Accompanied by the Thodupuzha river all along, we reached Malankara Dam, 9 kms from Thodupuzha. Though the dam was relatively small, the surroundings were lush and beautiful. Unfortunately it was just a brief stopover at the dam because of the persistent rain. 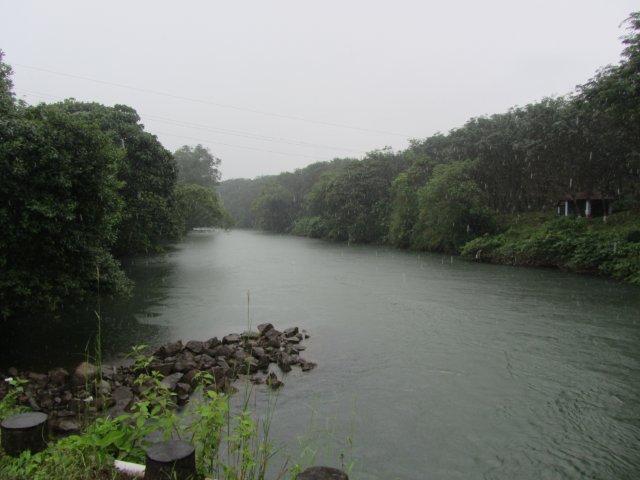 Waters flowing out of Malankara Dam

As we moved on towards Idukki, the rain got heavier and the drive became difficult. Our driver Rajesh, informed us that though he was a resident of Kottayam, this was the first time he was driving from Kottayam to Thekkady via Idukki. Hearing this made me more anxious, and I began to worry whether I had chosen the right time to visit the wettest district in Kerala. Soon we reached Moolamattom town which has the biggest underground hydro electrical power station in India. Water from the Idukki dam is carried by underground pipes to the power station. The power station is off-limits to tourists. We purchased some snacks at Moolamattom and moved on. 6 kms up the hill road from Moolamattom, lies Naadukani Pavilion, a view-point from where one can have a panoramic view of Moolamattom power station and Moolamattom town. It was pouring when we passed this place and we skipped the viewpoint. Same was the case with Kulamavu Dam (10 kms from Moolamattom) one of the three dams of the Idukki Dam project.

Our luck turned as we reached Idukki Dam. The rains let off and we drove straight to the Hill View Park, some 2 kms from Idukki town. The park situated on a small hill, offers panoramic views of Idukki Arch Dam and Cheruthony Dam. And what a sight it was! All our frustrations from the rain, turned into pure joy. For the first few minutes after getting out of our car, me and my wife stood absolutely awestruck and speechless at the view in front of us. We and our driver, apart from the few staff at the Hillview Park, were the only souls at that breathtaking spot. No words can describe the view of the Idukki Arch dam from the hill view park. I will just let the pictures do the talking. 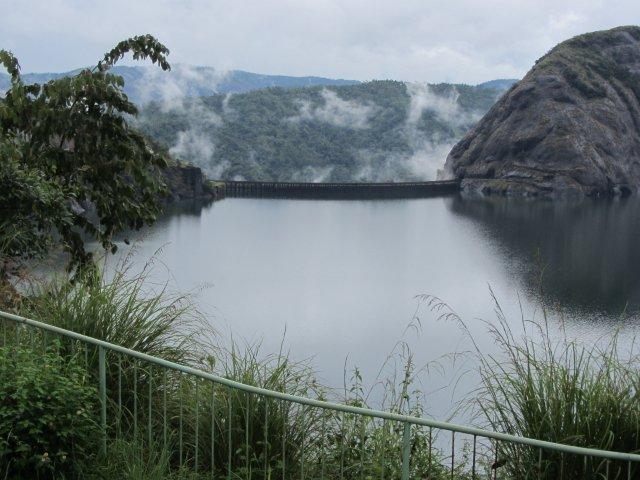 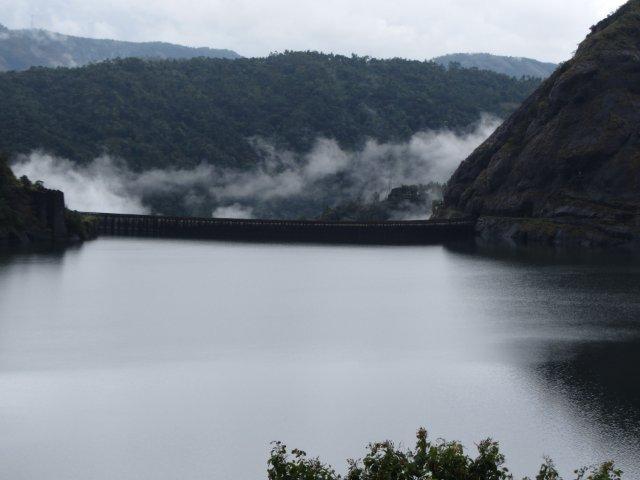 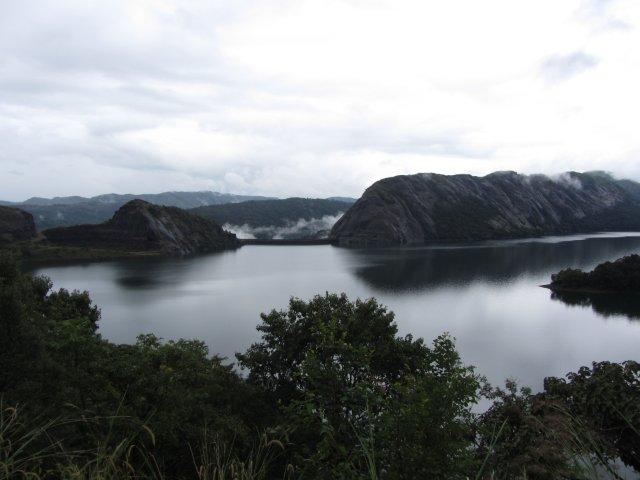 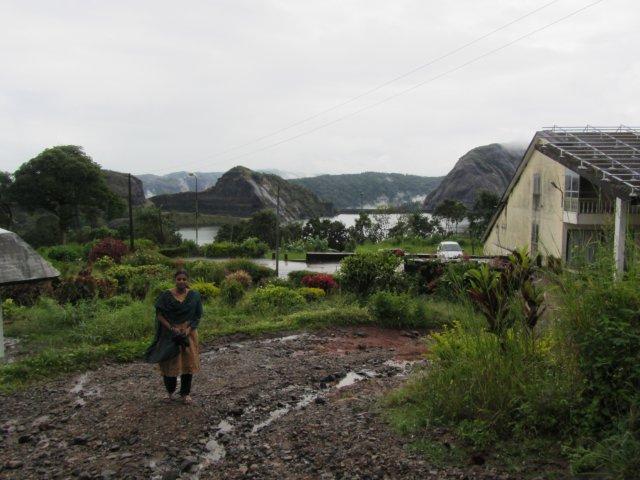 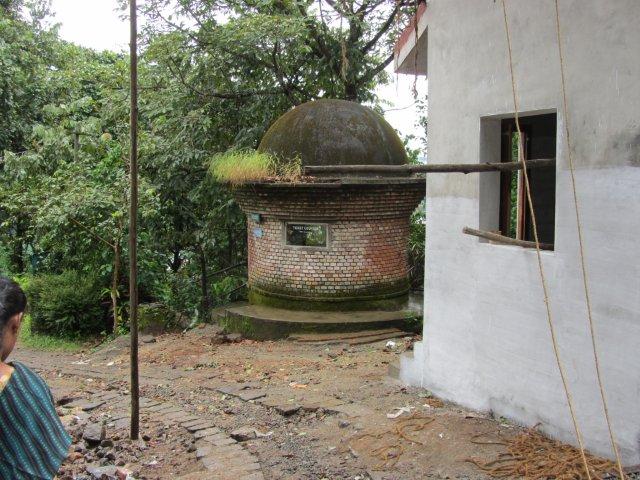 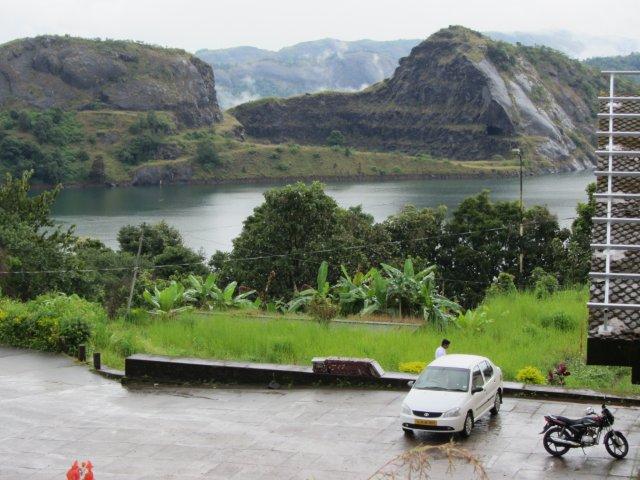 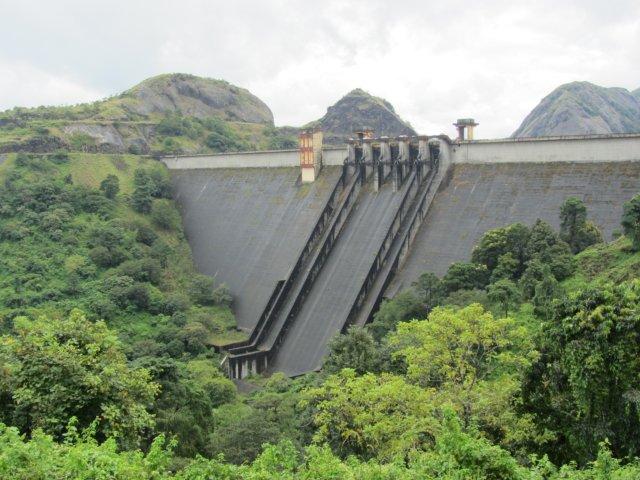 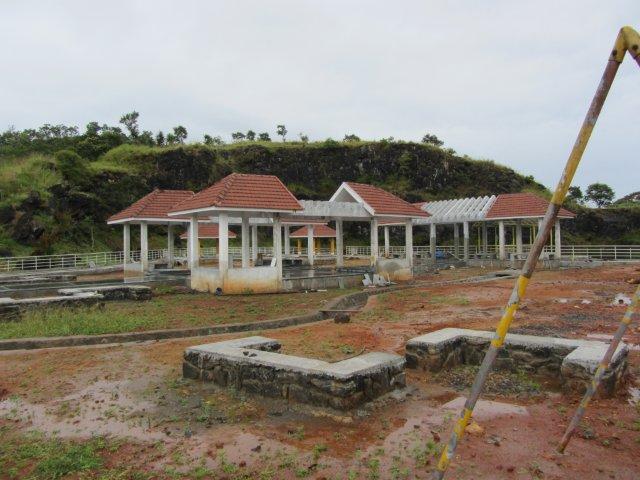 Facilities for tourists being constructed at Idukki Hill view park

After the gorgeous views for our eyes and souls, we went looking out for lunch and to treat ourselves to the famous Kerala cuisine. There are enough hotels at Cheruthony and Idukki that provide staple Kerala fare. Do not expect too much variety in the menu at these places. We chose Sahyadri Restaurant, run by a couple in Idukki town. Though we couldn’t have the Chicken Biriyani and Fish fry we desired (we were a little bit late for that), we got some good Chappatis and Fish curry. The place also provided Choru (Kerala rice meals). After lunch, we reached the other side of Idukki dam for the view from the Bottom. And the views were equally spectacular.

Closer to the bottom

The road which leads right down to the bottom

It once again started raining after we crossed Idukki. Our next planned destination was Calvary Mount. This place provides a birds’ eye view of the backwaters of Idukki Dam. This spot lies on the 10th mile from Idukki on the road to Kattapana. There are boards clearly mentioning this place. From the main road, there is a hilly road for 1 km. Vehicles can be driven up to the top on that road. From there you have an uphill climb on foot following crosses planted on the hill. Just as our vehicle reached the top, the rain got heavier again and the mist became thicker on the top of the hill, shrouding the pathway. We aborted our climb with a heavy heart and got back to our vehicle. 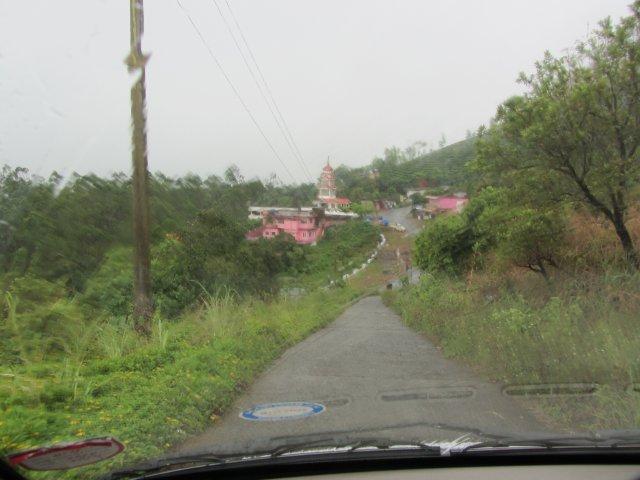 Hill road leading upto Calvary mount from the town below 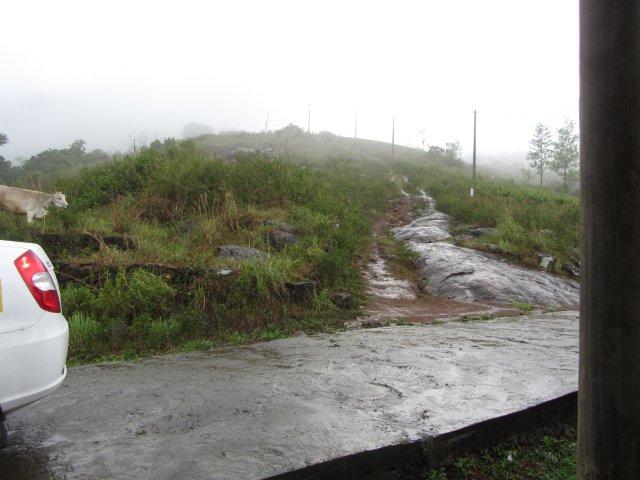 Though we were frustrated, we clearly made up our mind to visit the same route during a drier part of the year. From there we just decided to not endure any more frustrations in the rainy weather, and made up our mind to reach Thekkady and rest our bodies. But little did we know that an unexpected and unplanned bonus awaited us on the way.

We passed Kattapana, one of the bigger towns of the region, and proceeded towards Thekkady. Since the weather had made us skip many spots on the way, we were reaching Thekkady much earlier(around 4 pm) than we were scheduled to. Since we had confirmed accommodation at Thekkady and our planned boat ride in Thekkady was only the next morning, we decided to visit some places on the way before reaching Thekkady. And it was the best decision we made all day ! Our driver informed us that there was a water fall on the Tamilnadu-Kerala border, some 10 kms before Thekkady. He had visited that place once some years ago. After enquiring the routes to those falls from the locals, we reached the spot. We take a walk for some 100 metres from the main road, through the woods. As we reach the end of the pathway and towards the edge of the cliff, we begin to hear the roar of the waterfalls. It was a breathtaking sight. The waterfall was in its full glory as it was the rainy season. It was an unplanned and unexpected bonanza to our day and our camera clicked away merrily. Really these waterfalls are a little known gem and a not to be missed for one touring Thekkady. We were grateful to our driver for this gift. 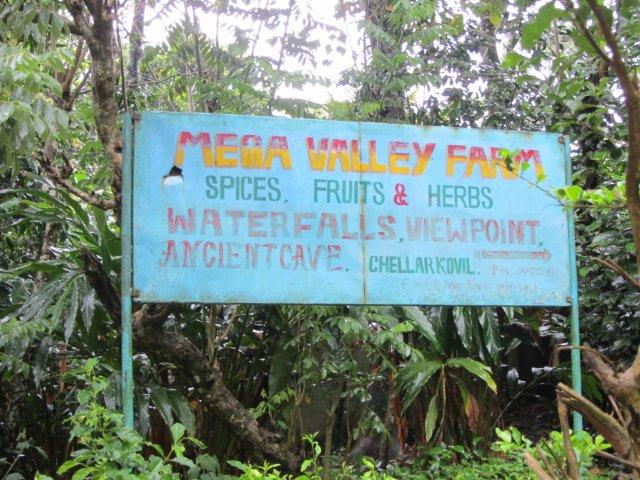 Detour to the waterfalls starts at this place 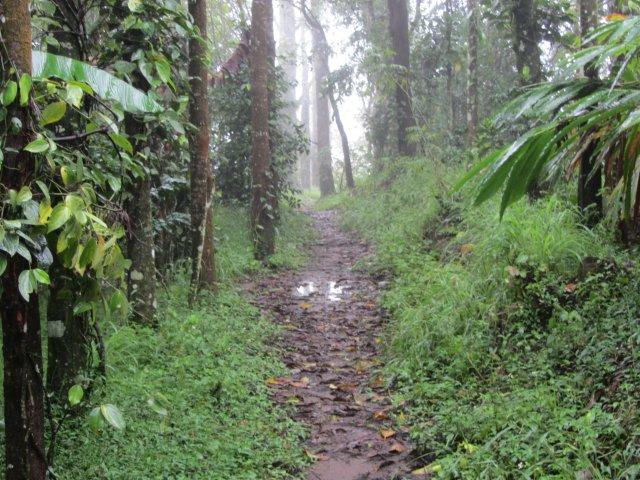 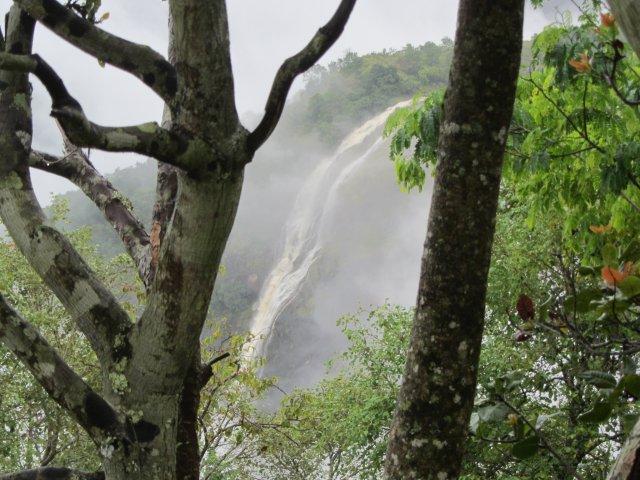 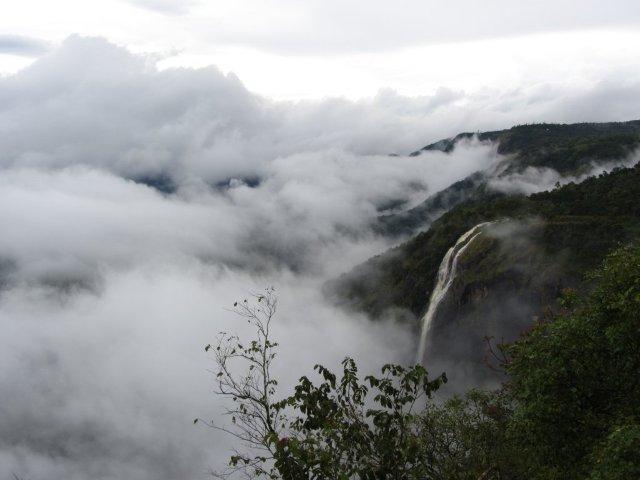 View of the Plains of Tamilnadu from Chellarkovil falls

Rejuvenated after the waterfall visit, we reached Hotel Highrange Residency, checked into our room and hit the bed for some much-needed rest.

The thrills at Thekkady Wildlife Sanctuary in next instalment.

But surely, there is one thing in common in all our expeditions. It is the seed of thought on our mind which grows and matures into a fully well planned and executed trip. A thought about where to go next is the seed I am talking about. While some of us get inspired by learning about places from friends, the new trend I see is the trend to explore the unexplored virgin places. Not bad at all, isnt it?