It was April and temperature had risen to 42 degrees in Bandhavgarh. Traveling to Madhya Pradesh at this time meant burning ourselves in scorching sun. But this was the best time to spot “The Tiger” in the wild. The tiger lover in us overpowered our delicate personalities and we decided to visit Bandhavgarh Wild Life sanctuary to see the Royal cat in his natural habitat.

Bandhavgarh Wild Life Sanctuary, located near Jabalpur, Madhya Pradesh, is one of the best habitats for Tigers in India. With 400 sq kms of sprawling forests settled at the backdrop of the famous Bandhavgarh hills & fort, the jungle boasts of having the highest tiger density in India. Also, the landscape is such that it is easy to spot tigers in the wild. This information was crucial because initially we were not sure which sanctuary was the best; Bandhavgarh or Kanha. But some research on Tripadvisor and other travel forums sorted our confusion and we choose Bandhavgarh.

Madhya Pradesh is alluring enough for travelers to club places like Bandhavgarh with excursions such as Khajuraho or Bhedaghat. Since we had been to Khajuraho, we decided to spend a day at Bhedaghat, which is only 14 km from Jabalpur railway station (one of the nearest stations to Bandhavgarh). Bhedadhat is famous for Dhuandhar waterfalls and marble rocks (river Narmada flowing in between the rocks). The song “Rat Ka Nasha” from movie Asoka (Kareena Kapoor and Shahrukh Khan) was shot here.

On 02 April 2012, we began our trip and reached Jabalpur next morning after 17 hours of train journey. We took an Auto (Rs. 300) to reach Motel Marble Rocks in Bhedaghat. Sadly, the auto was too slow and instead of 20-30 minutes, it took 45 mins to reach hotel. It is advisable to take auto after careful scrutiny because the road to Bhedaghat is deserted and one can land in trouble if the auto breaks down in the middle. It would be better to take a taxi (Rs. 800-900).

Owned by MP Tourism, this is the best place to stay in Bhedaghat primarily because it is located right on top of a hill adjoining the river Narmada and the Marble Rocks. Moreover, all tourist places; Chunsath Yogini Temple, Dhuandhar Waterfalls and Boating Ghat on Narmada River are within walking distance from the hotel. 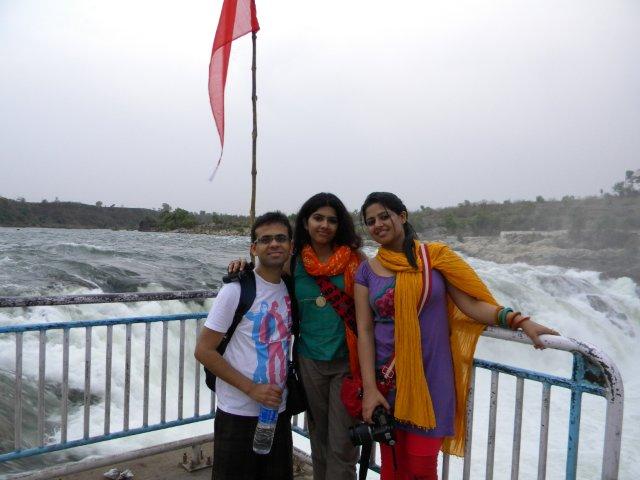 Dhuandhar Falls in the Background 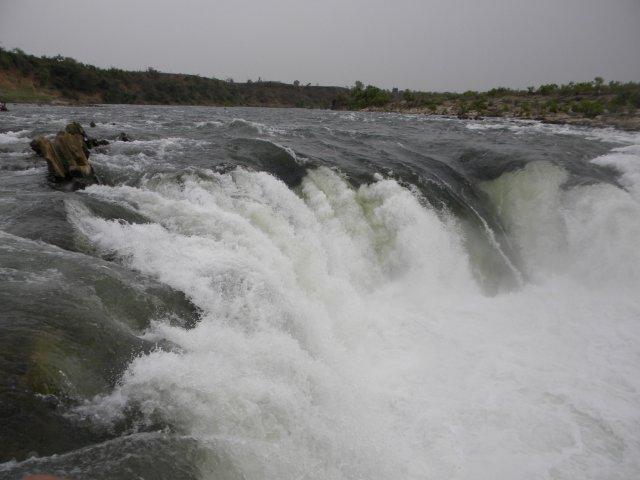 Though, our room was very basic, we were happy as it was clean, had beautiful views of the river amidst the rocks, and was big enough to accommodate the three of us (Me, My husband -Navs & my childhood friend -Vaishali). 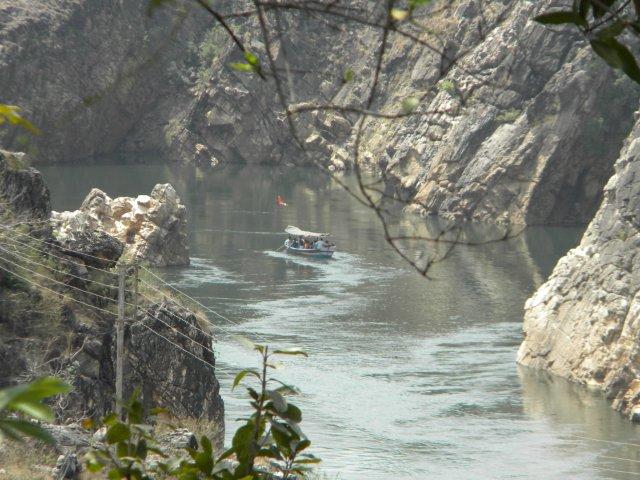 View from our Hotel

After a sumptuous breakfast, we walked to the Narmada Ghat for boating. It was almost 02:00 pm and the Sun was at its hottest self but the boat ride was soothing enough; the cool breeze from the river soaked up our sweat and comforted us with magnificent views of the marble rocks. 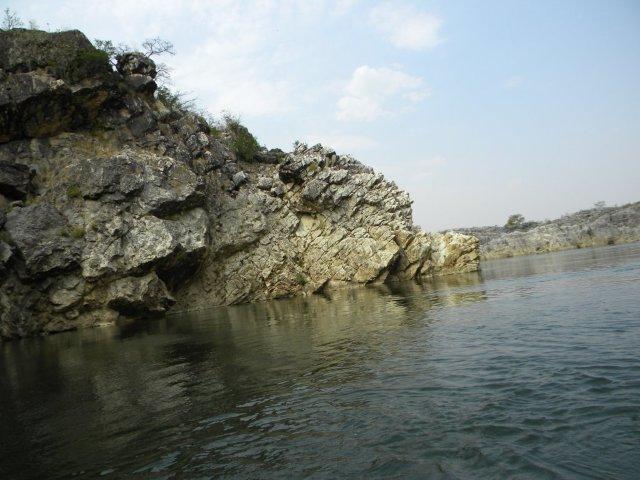 On the Boat Ride

It was amazing to see the rocks that were once under water, were now gleaming in sunshine, showing-off their beautiful scale-like textures and surface pores. Some of them actually looked like a piece of Cheese. While I was imagining this, a water snake made its way on the rocks, making the ride thrilling for all.

The Marble Rocks of Bhedhaghat

The boat ride lasted for an hour & was thrilling, beautiful, peaceful and hilarious; all at the same time. Hilarious, because our boat rider had prepared a narration about the rocks, the river and everything that could possibly be talked about, in a truly hilarious and poetic way. And that is true for all the boat riders available there. So, in case you are looking only for solitude on the boat ride, take a private boat (cost Rs.400) or else to enjoy the environs among locals and the witty narrations, get on a passenger boat, accommodating around 20 people (Rs. 20-30/person).

There are two kinds of boats available at Bhedaghat, a Motor boat and a row boat; for best experience, I would suggest a Row boat because of its slow pace that allows you to enjoy everything at leisure. One disadvantage though is that if the water is too deep and currents are rapid, the row boat may not take you till the Monkey point, where the river flows through a very narrow space between the rock; a sight worth visiting. This is what happened with us, but overall the ride was worthwhile.

Marble rocks jutting out of the River Narmada

Exhausted and hungry, we went back to our hotel and grabbed a light lunch and drank lime juice that hydrated us instantly (There are not great eating joints at the Ghat). Our next destination was Dhuandhar waterfalls, (3 kms from the hotel). Since, we were in no mood to walk; we took an auto till the waterfall. Ethically, vehicles are not allowed to the waterfall, but a VIP gate allows you to do that (costs: Rs.50 one way).  The waterfall was beautiful and the gush had a calming effect. Once you see the waterfall, you would know why it is called Dhuandhar: Dhuan, meaning smoke, Dhar meaning cascade. The rushing water produces tiny water particles in the air, creating an appeal of smoke erupting from the cascades. We spent over an hour watching the falls, the fishes that jumped over and cooled our selves by dipping our feet in the lagoons surrounding the falls.

By the time we came back, it was dusk and we had snacks and tea in the open garden of the hotel, enjoying views of the river below. A sudden thunder splash comforted us and we looked forward to a comparatively cool morning.

View of the city from the temple complex

Next morning, we woke up by seven and paid visit to the Chaunsath Yogini temple that was 2 mins walking distance from our hotel. After climbing 108 stairs, we were happy to see the view around. The temple complex gives a panoramic view of the Bhedhaghat city, with Narmada traversing through its grounds. Unlike many temples, this one was very peaceful and less crowded. 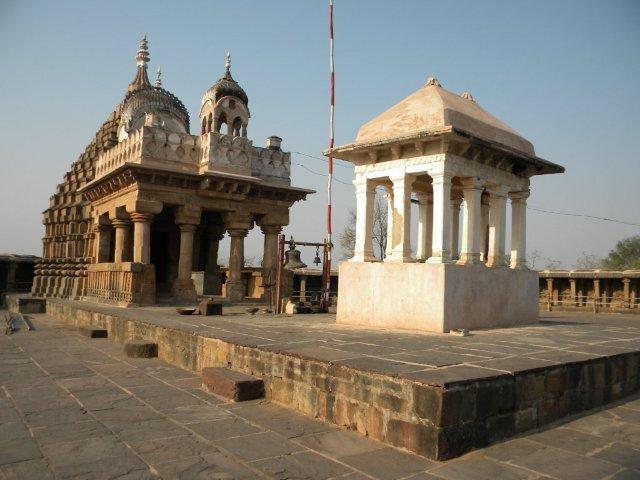 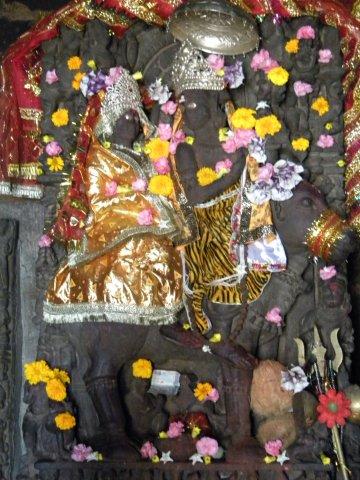 This was Bhedaghat, but don’t go anywhere as the real story is yet to begin. My next post will take you through Bandhavgarh, its jungle and our encounter with the Big Cat!!!

Excursion to Bhedaghat was last modified: December 18th, 2020 by Aparna